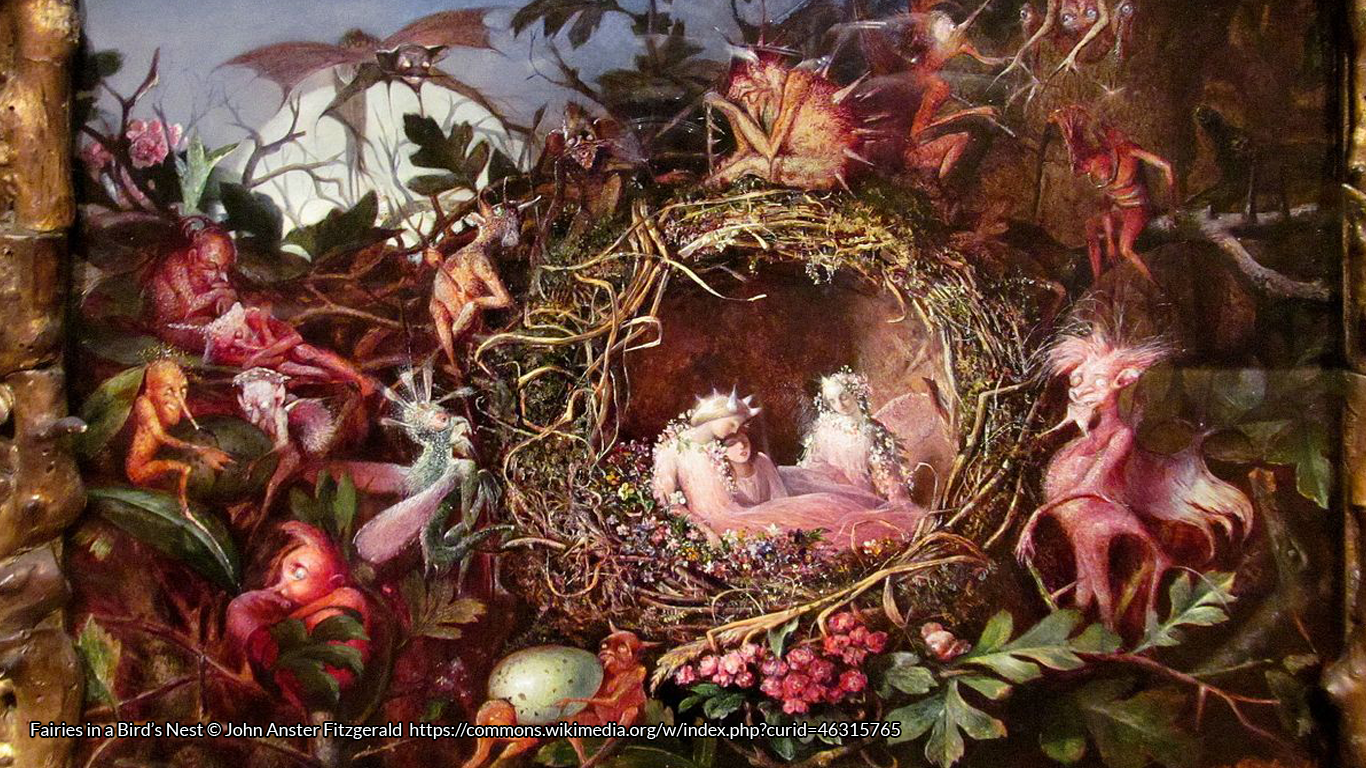 The notion of fairy changelings, whilst dating back centuries, in many ways feels like a modern concept. That a human might be stolen away by the little folk and replaced with a worn-out fairy or stock of wood, enchanted to look like them, is reminiscent of the human-seeming aliens in Invasion of the Body Snatchers. There are overtones of demon possession, as in films like The Exorcist; it could even be said that the issues raised are currently being echoed in the TV series Humans, with its exploration of robotics.

At same time, changelings hark back to concerns that were very much, thankfully, of their day. In situations where every child needed to quickly stop being a burden and earn their bread, the birth of a baby with disabilities could have desperate consequences. In a world riddled with disease or malnutrition, infants often failed to thrive. It is perhaps no accident that fairy changelings were said to be weak, that they would not grow or would die soon after their arrival. It must have been a comfort, on occasion, to think that the family’s perfect child had merely been stolen away to a land where it was always summer, and that a deceased baby had only been a fairy changeling.

In a world riddled with disease or malnutrition, infants often failed to thrive. It is perhaps no accident that fairy changelings were said to be weak, that they would not grow or would die soon after their arrival.

There were worse consequences to the folklore, however. Thomas Hobbes noted in 1650s that it was sometimes used to excuse abusive behaviour towards disabled children. It could even lead to the murder of an inconvenient child.

There were many tricks used to frighten changelings away or make them reveal the truth, at which point the real child was supposed to be returned. Hartland outlines some of these in The Science of Fairy Tales. They might be doused in a river, or placed on a heated shovel, or made to sleep overnight in an open grave dug in a field. They might even be thrown onto the fire in the hope they would fly shrieking up the chimney.

Changelings were not always infants. In 1895, in Ireland, a young woman called Bridget Cleary was burned to death on her own hearth. Her husband claimed he was merely trying to get rid of a changeling, so that his true wife would be returned to him. That the case was shocking was reflected in the outcry and huge interest in the court case that followed.

In 1895, in Ireland, a young woman called Bridget Cleary was burned to death on her own hearth. Her husband claimed he was merely trying to get rid of a changeling

It is quite possible that Bridget’s husband had more earthly reasons for wanting to be rid of her. Was he a true believer? Did he always think that fairies lived in the hollow hills, or did he convince himself of it because of a desire to be free of her? Was the truth something more cynical yet? The answer remains a kernel of mystery at the heart of the case, as unknowable as the fairies themselves.

By 1895, when Bridget Cleary was murdered, the general view of fairies had evolved a long way from such sinister affairs. Even whilst folklore movements tried to recover and record the stories of the past, others were leaving such images behind. For middle class Victorian writers, artists and playwrights, fairies were increasingly romanticised. In an age driven by machinery, by industrialisation and urbanisation, they were reconfigured as part of an Arcadian rural past that was lost to so many. Perhaps fairies could also return a little enchantment to the world, when the foundations of religion were being shaken by developments in geology and evolutionary theory.

Fairies were increasingly pictured as ethereal, lovely beings, and as part of the natural world. They became tiny in stature, small enough to live in the cup of a flower, and flew on the wings of a butterfly. This is reflected in art as well as literature. At the end of the eighteenth century, Fuseli’s grand canvases depicted literary, Shakespearean fairies which varied in size but were often close to that of humans. In the middle decades of the nineteenth century, John Anster Fitzgerald – known as ‘Fairy Fitzgerald’ – was producing smaller, jewel-like paintings of tiny fairies living in birds’ nests, full of obsessive detail.

Fairies … became tiny in stature, small enough to live in the cup of a flower, and flew on the wings of a butterfly.

Even whilst belonging in the natural world, however, Fitzgerald’s fairies evade being altogether sweet and lovely. Some are odd little demonic creatures reminiscent of Hieronymus Bosch. Others kill robins with swords made from vicious looking thorns. Fairies are by nature elusive, and whilst they may change over the years to reflect the concerns of society, they can equally slip from our grasp and question our expectations. Their ability to evolve and defy us is part of their enduring appeal.

Likewise, in literature, a sinister note may intrude. The tempestuous Heathcliff, in Emily Brontë’s Wuthering Heights, is often accused of being a changeling. When he is first brought home, Ellen Dean is inclined to put him out on the landing in the hope he will have vanished by morning. Ideas springing from an older, darker mythology of fairies still lingered.

Some are odd little demonic creatures reminiscent of Hieronymus Bosch. Others kill robins with swords made from vicious looking thorns.

In earlier, more uncertain times, any dealings with the folk could be unpredictable and perilous. Tales of these encounters reflected the precarious nature of life and the concerns and fears people held: about having enough to eat, or the dangers of walking in the woods by moonlight, or the risks inherent in seeing an infant safely into adulthood.

Of course, changelings appeal to one of the deepest human fears of all – that of losing a loved one. It is perhaps even more terrifying to lose someone, to feel they are at an unreachable distance, even while they appear to be living in your house, even lying in your bed. They also raise issues of how far we can ever know anyone – after all, any unexpected word or action could betray a changeling.

It is because such fears are universal that changelings are still relevant today. Stories of changelings are strange and mysterious, with more than a little dark magic at their heart, but they are essentially stories about ourselves.

Win a copy of The Hidden People!

Bestselling author Alison Littlewood has kindly offered a copy of her wonderful novel, The Hidden People, for one lucky #FolkloreThursday reader! Sign up for the #FolkloreThursday newsletter for details of how to be in with a chance to win (valid January 2017).

More about the book …

Pretty Lizzie Higgs is gone, burned to death on her own hearth – but was she really a changeling, as her husband insists? Albie Mirralls met his cousin only once, in 1851, within the grand glass arches of the Crystal Palace, but unable to countenance the rumours that surround her murder, he leaves his young wife in London and travels to Halfoak, a village steeped in superstition.
Albie begins to look into Lizzie’s death, but in this place where the old tales hold sway and the ‘Hidden People’ supposedly roam, answers are slippery and further tragedy is just a step away . . .

Alison Littlewood is the author of The Hidden People, published by Jo Fletcher Books. A rational Victorian man of the city, Albie Mirralls, is called to a rural village where his cousin has been burned to death as a fairy changeling. In this place where the old tales hold sway and the ‘hidden people’ supposedly roam, answers are slippery and further tragedy is just a step away . . . Alison’s first novel, A Cold Season, was selected for the Richard and Judy Book Club. Other novels include Path of Needles, a dark blend of fairy tales and crime fiction, and The Unquiet House, a ghost story set in the Yorkshire countryside. Her short stories have been picked for many Year’s Best anthologies and won the 2014 Shirley Jackson Award for Short Fiction. Alison lives with her partner Fergus in Yorkshire, England, in a house of creaking doors and crooked walls. She loves exploring the hills and dales with her two hugely enthusiastic Dalmatians and has a penchant for books on folklore and weird history. The Hidden People is available in all good bookshops and online here. Visit Alison’s website or follow her on Twitter.