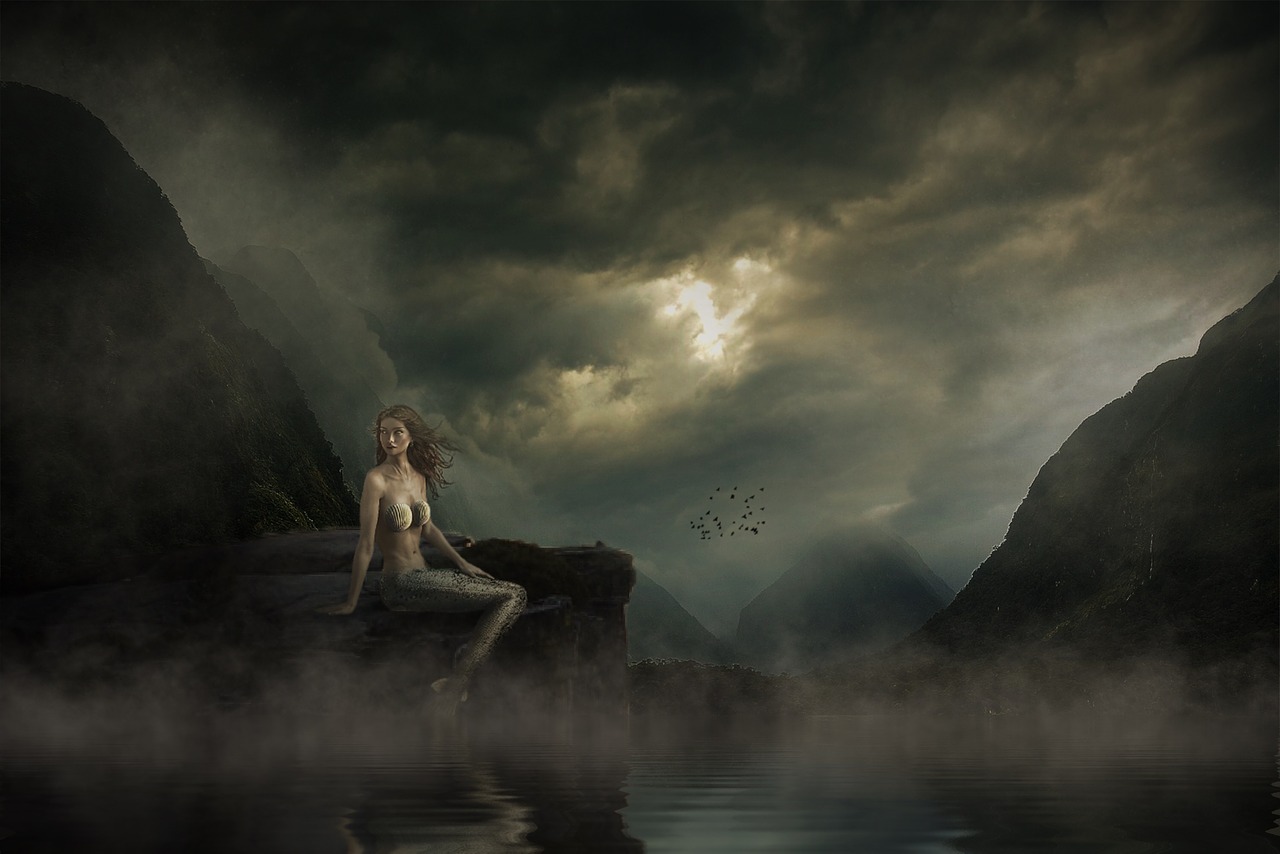 During WWII, Japanese soldiers were stationed in a 555 square mile area in the Kei Islands in Indonesia. There, they had some strange encounters with “mermaids” during the 1940s.

The local villagers were familiar with these creatures and called them orang ikan which translates to man fish. The creatures were described as being around 150cm tall having spikes on the spine, shoulders and neck. They were said to have pink salmon colored skin, and a mouth that resembled a carp. Rather than having a fishtail, these creatures had long arms and frog like legs, both of which had talons at the end.

The Japanese soldiers recorded many different sightings saying they even saw some on land suggesting they were amphibious but mostly seemed at home in the water. One instance, a troop of soldiers claimed to be exploring some unseen land and came upon a natural lagoon. Everything seemed normal until there were sudden thrashing in the water. Suddenly, an orang ikan jumped out of the water onto a nearby rock. It turned and faced the soldiers to let out a “gurgling burping” noise that didn’t seem to be friendly. They then saw another creature moving smoothly in the water toward them as fast as any fish would. Not knowing the intention of the creatures, the soldiers started shooting at the rocks and into the water only to have the creatures disappear from view.

A sergeant named Mr. Taro spoke to the villagers and requested if any of the orang ikan were captured — dead or alive — to contact him immediately. It was soon after that the chief summoned the general and, to his astonishment, saw with his own eyes the lifeless aquatic creature. He describes what he saw as:

“Roughly 4-foot 9-inches tall, pinkish skin, human looking face and limbs, spikes along its head, and a mouth like a carp.”

Mr. Taro Horiba made his best efforts after the war to get the scientific community involved, yet unfortunately nothing ever happened.

How crazy would it be to see a real mermaid just lounging on the beach for hundreds of eyes to see? The social media exposure would undoubtedly capture every moment and be able to debunk any fakers. That was not the case back in 1967 near the Mayne Islands of British Columbia.

Story goes, a ferry filled with tourists spotted a blonde-haired mermaid sitting topless on the beach, eating a salmon fish, and enjoying the waves splash up upon her.  One witness said she was attractive and had dimples. There was one photo taken of the event which does show a blonde woman with the lower half of a porpoise.

A similar incident happened later that week with a mermaid spotting but by that time there were plenty of skeptics who didn’t believe she was real. Charles White, from the Undersea Gardens, financed $25,000 reward for the mermaid’s capture, and even offered room and board with special combs for the mermaid’s pleasure. This may sound odd but the company was desperate to prove her existence. Unfortunately, the story died soon after.

The island of Hawaii has plenty of folklore and legends around beautiful aquatic creatures but in 1998 a diver named Leicher claims he got the first ever documented proof that mermaids do exist.

Leicher operates the Jack Diving Locker of Kawai and was 20 minutes off the coast of Kauai when he saw what looked like a nude woman swimming with a pod of dolphins. The woman was able to keep up the pace with the dolphins, which Leicher thought was odd. All of a sudden she jumps into the air and he realizes she has the lower half of a fish!

Ten people on the boat witnessed the incident, but the mermaid disappeared after just two jumps out of the water. You might think this is the end of the story, but an hour later, as Leicher was photographing some underwater life, that same mermaid brushed up against him while swimming and turned back around just in time for him to snap a few pictures. He says:

“I feel very lucky that I’m the one to finally prove to the world what people here have known for half a century,” says Leicher. The Kaiwi Point Mermaid is real.”

In 2009, dozens of locals near Kiryat Yam Israel have claimed to see a mermaid off the shore at sunset. These sightings went on for some time before the local media got involved. The onlookers said the creature resembles a young girl and would often visit the beach and do tricks in the water.

Eventually the Israeli government noticed all the attention and issued a $1 million dollar reward for anyone who could provide proof of the mermaid. This didn’t include capturing, it simply requires an authentic photo. NBC decided to do its own investigation and had a film crew stationed at Kiryat Yam beach morning and night, above and below the water to document the mermaid. The crew claimed that late one night they managed to spot a human figure dipping into the water, then disappearing.

The research crew did their best to pursue the mermaid but were unable to trace its location. The footage was transferred to the Coastal Oceans Research in Los Angeles to see if it could be authenticated. Michael Shacht the centers director said that although it was impossible to unequivocally determine the figure in the footage, it still remains a viable option. This just means, it could be, but can’t be proven.

Tourists and locals are still on the lookout to prove the existence of the Kiryat Yam mermaid to claim the $1 million dollar reward.

Some mermaids just want to be left alone. This was the case of the Zimbabwe dam workers in 2012 who were trying to install a water pump which was crucial to the local agriculture. Local divers and workers were hired to see what was blocking the pump and when they surfaced, vowed never to return.

Sam Sipepa Nkomo, a water resource minister, told the Senate Committee that the village chiefs could perform an ancient ritual to get rid of the mermaid. and calm the workers anxiety. They still refused to return even after the ritual was performed. Being skeptical of the workers’ reasons for quitting, the government hired outside help, as they thought this belief was cultural, but the new workers reported the same thing and refused to finish the repairs.

To this day, the dam is still not finished.

There are those that will swear mermaid sightings are authentic, but the veracity of these stories will have to be decided for yourself. Are mermaids real?

Molly is the owner of the blog Everything Mermaid and enjoys writing articles not only for her blog, but other mermaid sites. She specializes in mermaid folklore, and mermaid product reviews. Visit Molly on her website.