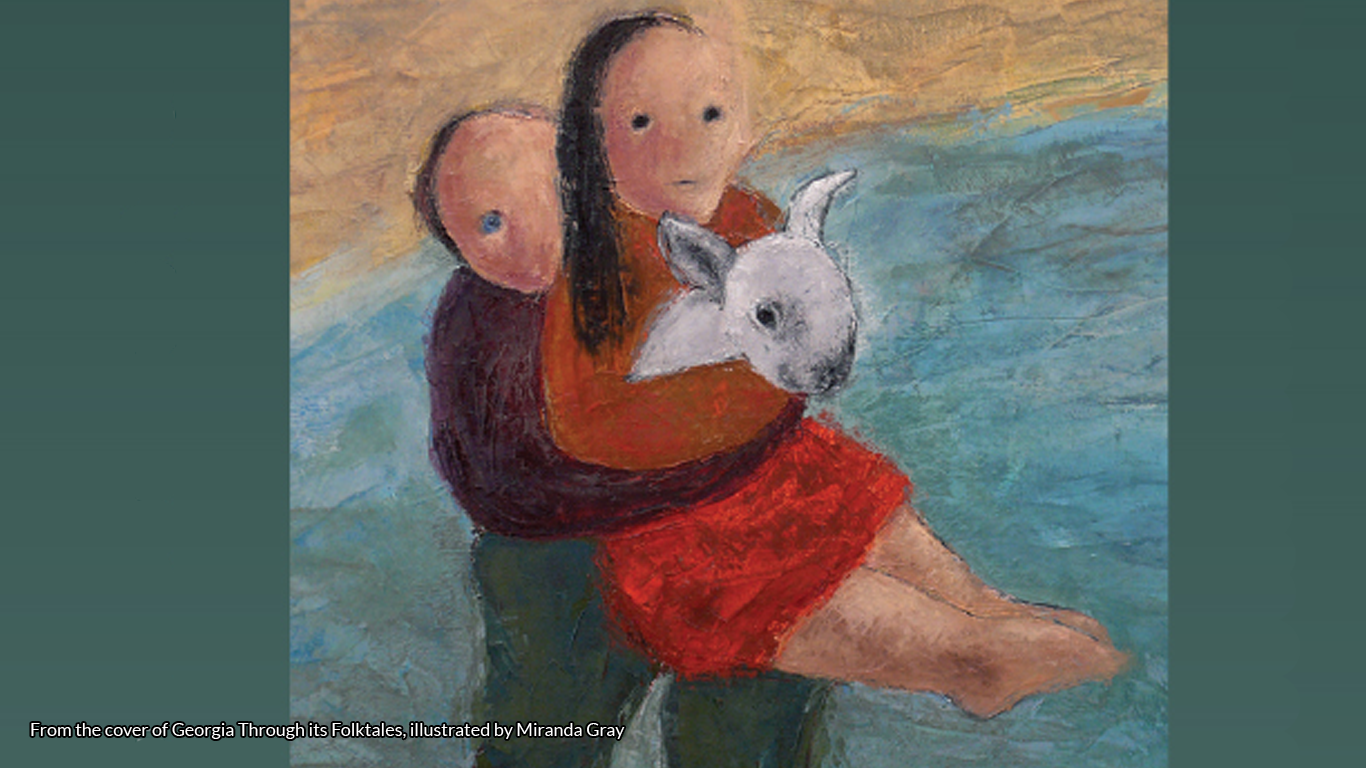 This is a story collected in Michael Berman’s book ‘Georgia Through its Folktales’. The book explores the shamanic possibilities held within folk tales, and has a number of traditional Georgian tales within it. There are plenty of familiar themes here – the three sons, the quest, the maiden who must be won by some unlikely means, and repayment for kind deeds that lets a young man win the day. There’s also plenty of unusual elements in this tale as well.

There was a king, and he had three sons. Once he fell ill, and became blind in both eyes. He sent his son for a surgeon. All the surgeons agreed that there was a fish of a rare kind by the help of which the king might be cured. They made a sketch of the fish, and left it with the sick monarch.

The king commanded his eldest son to go and catch that fish in the sea. A hundred men with their nets were lost in the sea, but nought could they find like the fish they sought. The eldest son came home to his father and said: “I have found nothing.” This displeased the king, but what could he do? Then the second son set out, taking with him a hundred men also, but all his men were lost too, and he brought back nothing.

After this, the youngest brother went. He had recourse to cunning; he took with him a hundred kilas of flour (Kila, a measure of flour = about 36-40 pounds) and one man. He came to the sea, and every day he strewed flour in the water, near the shore, until all the flour was used up; the fishes grew fat on the flour, and said: “Let us do a service to this youth since he has enabled us to grow fat”; so, as soon as the youth threw a net into the sea, he at once drew out the rare fish he sought. He wrapped it up in the skirt of his robe, and went his way.

As he rode along, some distance from his companion, he heard a voice that said: “O youth, I am dying!” But on looking round he saw no man, and continued his journey. After a short time, he again heard the same words. He looked round more carefully, but saw nothing. Then he glanced at the skirt of his robe, and saw that the fish had its mouth open, and was dying.

The youth said to it: “What dost thou want?” The fish answered:“It will be better for thee if thou wilt let me go, some day I shall be of use to thee.” The youth took it and threw it into the water, saying to his comrade: “I hope thou wilt not betray me.” When he reached home, he told his father that he had been unsuccessful. Some time passed. Once the prince quarrelled  with his comrade, and the latter ran off and told the king how his son had deceived him.

When the king heard this, he ordered his son to be taken away and killed. He was taken out, but when they were about to kill him, the youth entreated them, saying: “What doth it profit you if you slay me? If you let me go, ‘twill be a good deed, and I shall flee to foreign lands.” The executioners took pity on him, and set him free; he thanked them, and departed.

He went, he went, he went, he went farther than anybody ever went – he came to a great forest. As he went through the forest, he saw a deer running, in a great state of alarm. The youth stopped, and fixed his gaze on it; then the deer came up and fell on its face before him. The youth asked: “What ails thee?” “The prince pursues me, and on thee depends my safety.”

The youth took the deer with him and went on. A huntsman met him, and asked: “Whither art thou leading the deer?” The youth replied: One king has sent it as a gift to another king, and, lo! I am taking it.” The youth thus saved the deer from death, and the deer said: “A time will come when I shall save thy life.”

The youth went on his way: he went, he went, he went, so far he went, good sir, that the three day colt (of fable) could not go so far. He looked, and, lo! A frightened eagle perched on his shoulder, and said: “Youth, on thee depends my safety!” The youth protected it also from its pursuer. Then the eagle said to him: “Some day I shall do thee a service.”

The youth went on: he went through the forest, he went, he went, he went, he went further than he could, he went a week, two weeks, a year and three months. Then he heard some fearful rumbling, roaring, thunder and lightning – something was coming through the forest, breaking down all the trees. A great jackal appeared, and ran up to the youth, saying: “If thou wilt thou canst protect me; the prince is pursuing me with all his army.” The youth saved the jackal, as he had saved the other animals. Then the jackal said: “Some day I shall help thee.”

The youth went on his way, and, when he was out of the wood, came to a town. In this town he found a castle of crystal, in the courtyard of which he saw a great number of young men, some dying and some dead. He asked the meaning of this, and was told: “The king of this land has a daughter, a maiden queen; she has made a proclamation that she will wed him that can hide himself from her; but no man can hide himself from her, and all these men has she slain, for he that cannot hide himself from her is cast down from the top of the castle.”

When the youth heard this, he at once arose, and went to the maiden. They bowed themselves each to the other. The maiden asked him: “Wherefore art thou come hither?” The youth answered: “I come for that which others have come for.” She immediately called her viziers together, and they wrote out the usual contract.

The youth went out from the castle, came to the seashore, sat down, and was soon buried in thought. Just then, something made a great splash in the sea, came and swallowed the youth, carried him into the Red Sea, there they were hidden in the depths of the sea, near the shore. The youth remained there all that night.

When the maiden arose the next morning she brought her mirror and looked in it, but she found nothing in the sky, she looked on the dry land, and found nothing there, she looked at the sea – and then she saw the youth in the belly of the fish, which was hiding in the deep waters. After a short time, the fish threw up the youth on the place where it had found him. He went merrily to the maiden.

She asked: “Well, then, didst thou hide thyself?” “Yes, I hid myself.” But the maiden told him where he had been, and how he got there, and added: “This time I forgive thee, for the cleverness thou hast shown.”

The youth set out again, and sat down in a field. Then something fell upon him, and took him up into the air, lifted him up into the sky, and covered him with its wing. When the maiden arose next morning, she looked in her mirror, she gazed at the mountain, she gazed at the earth, but she found nothing, she looked at the sky, and there she saw how the eagle was covering the youth. The eagle carried the youth down, and put him on the ground. He was joyful, thinking that the maiden could not have seen him; but when he came to her she told him all.

Then he fell into a deep melancholy, but the maiden, being struck with wonder at his cunning in hiding himself, told him that she again forgave him. He went out again, and, as he was walking in the field, the deer came to him and said: “Mount on my back.” He mounted, and the deer carried him away, away, away over all the mountains that were there, and put him in a lair. When the maiden arose the next morning, she found him, and when he came back to her she said: “Young man, it seems that thou hast many friends, but thou canst not hide thyself from me; yet this day also I forgive thee.” The youth went sadly away; he lost his confidence.

When he sat down in the field, an earthquake began, the town shook, lightning flashed, thunder rolled, and when a thunderbolt had fallen, there leapt out from it his friend the gigantic jackal, and said to him: “Fear not, O youth!” The jackal had recourse to his wonted cunning, it began to scrape at the earth: it dug, it dug, it dug, and burrowed right up to the place where the maiden dwelt, and then it said to the youth: “Stay thou here, she will look at the sky, the mountain, the sea, and when she cannot find thee she will break her mirror; when thou hearest this, then strike thy head through the ground and come out.”

This advice, of course, pleased the youth. When the maiden arose in the morning, she looked at the sea, she found him not, she looked at the mountain, she looked at the sky, and still she could not see him, so she broke her mirror. Then the youth pushed his head through the floor, bowed, and said to the maiden: “Thou art mine and I am thine!” They summoned the viziers, sent the news to the king, and a great feast began.

Win a copy of Georgia Through its Folktales by Michael Berman

The wonderful folks over at Moon Books have offered a copy of Michael’s amazing book of Georgian folktales for a lucky #FolkloreThursday newsletter subscriber this month!

‘Everything shifts in the Caucasus, blown by some of the strongest winds on earth. Even the ground moves, splintered by fault lines. In early Georgian myths, it is said that when the mountains were young, they had legs – could walk from the edges of the oceans to the deserts, flirting with the low hills, shrouding them with soft clouds of love’ – “Griffin”, 2001, p.2. But what about those aspects of life which remain relatively constant – the traditional practices of the people, the practices that are reflected in their folktales and their folklore? It is these constants that this study concentrates on. Find out about the land with which the earliest folklore of Europe is connected – the land where Noah’s Ark is said to have settled, the land of the Argonauts and of Prometheus.

Sign up for the #FolkloreThursday newsletter to enter (valid June 2017; UK & ROI only).

Michael Berman (1952-2013) BA, MPhil, PhD (Alternative Medicines) was involved in teaching and teacher training for over thirty five years, and gave presentations at conferences in more than twenty countries. He also trained as a Core Shamanic Counsellor with the Scandinavian Centre for Shamanic Studies under Jonathan Horwitz. Michael’s published work includes The Power of Metaphor for Crown House, The Nature of Shamanism and the Shamanic Story for Cambridge Scholars Publishing, Shamanic Journeys through the Caucasus and Shamanic Journeys, Shamanic Stories for O-Books, Journeys outside Time for Pendraig Publishing, and Tales of Power for Lear Books. A Bridge to the Other Side: Death in the Folk Tradition and Georgia through Earth, Fire, Air and Water. For more information please visit http://www.thestoryteller.org.uk.