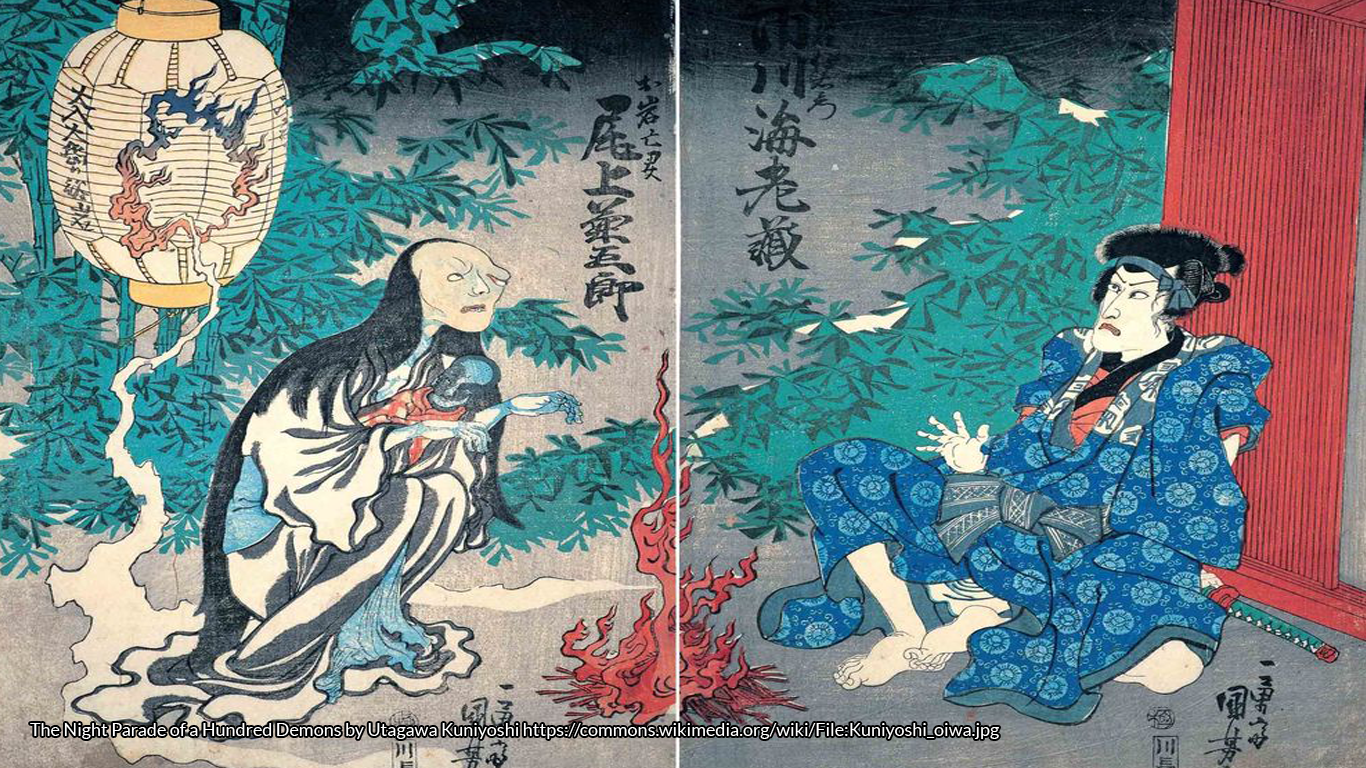 Japan is known around the world for producing blood-curdling ghost stories. Ghosts like Sadako from The Ring and Kayako from The Grudge cemented Japan’s position as a top producer of horror films. But Japan’s talent for terrifying goes a lot deeper than movie making. Those movies are only the most recent addition to a centuries-old tradition of ghost story telling that reached its height over 150 years ago, during the Edo period. 19th century Japan was obsessed with ghost stories. In fact, there are three ghost stories from that time that are so famous in Japan that they are known as the Nihon san dai kaidan—Japan’s Three Great Ghost Stories. These stories are so influential that they serve as direct inspiration for today’s horror films. In a sense, you could say that Sadako’s and Kayako’s ancestors are the ghosts from these three stories: Okiku, Otsuyu, and Oiwa. While there are many variations on each ghost’s story, here are three popular versions.

Okiku (from The Dish Manor at Bancho)

Long ago, there was a woman named Okiku who worked as a dishwashing servant at Himeji Castle. Okiku was very beautiful, and it was not long before she caught the eye of one of her master’s retainers, a samurai named Aoyama. Aoyama tried many times to seduce Okiku, but each time she rejected his advances.

Eventually, Aoyama grew impatient with Okiku and decided to trick her into becoming his lover. In the castle there was a set of ten very expensive dishes. Aoyama hid one of the them, and then called for Okiku. He told her one of his master’s fine dishes was missing, and demanded to know where it was. Okiku became frightened. Losing one of her lord’s prized dishes was a crime punishable by death. She counted the dishes, “one… two… three… four… five… six… seven… eight… nine…” She recounted them again and again. Each time she came up one short. Okiku was distraught.

Aoyama told Okiku that he would overlook her mistake, and tell his master that it wasn’t Okiku who lost the dish—but only if she would become his mistress. Though Okiku wanted to live, she once again refused Aoyama. This time the samurai became furious. He ordered his servants to beat Okiku with a wooden sword. Afterwards, he had her tied up and suspended over the castle well. He tortured Okiku, repeatedly dunking her into the well, only to pull her back out of the water and beat her himself. Aoyama demanded one last time that Okiku become his mistress. She refused. So Aoyama struck her violently with his sword and dropped her body down the well.

Not long after, Okiku’s ghost was seen wandering the castle grounds. Night after night, she would rise from the well and enter her master’s house, searching for the missing dish. She would count the plates, “one… two… three… four… five… six… seven… eight… nine…” After counting the ninth plate, she would let out a blood curdling scream that could be heard throughout the castle. She tormented Aoyama in this way, every night, robbing him of his rest. Those who heard part of Okiku’s counting became very sick. Those unlucky enough to hear her count all the way to nine died shortly after.

Finally, the lord of the castle decided that something had to be done about Okiku’s ghost. He called a priest, and asked him to pray for her and exercise her spirit. The priest waited in the garden all night, chanting sutras. Once again, Okiku’s ghost rose out of the well. She began to count the dishes, “one… two… three… four… five… six… seven… eight… nine…” As soon as Okiku counted the ninth dish, and before she could scream, the priest shouted out: “TEN!” Okiku’s ghost appeared relieved that someone had found the missing dish. From then on, she never haunted the castle again.

Otsuyu (from The Peony Lantern)

Long ago lived a man named Ogiwara Shinnojō, who was recently widowed. On the first night of Obon, a Japanese festival celebrating ancestors, Ogiwara saw a beautiful woman and her servant walking down the street, carrying a lantern with a peony motif. Ogiwara was instantly smitten with the beautiful woman and invited her into his home. Her name was Otsuyu. That night they made love. Otsuyu stayed with Ogiwara until long after the moon had set and the lamplight had grown faint, when she reluctantly bid him farewell and left in the early morning.

To Ogiwara’s delight, Otsuyu and her servant returned the following evening, carrying the same peony lantern. Ogiwara fell deeply in love with Otsuyu. He quickly lost interest in seeing anybody but her. Ogiwara no longer left his house, and stopped taking care of himself. Night after night, Otsuyu visited Ogiwara’s house. Each night they made love, and each night she left before dawn.

Twenty days passed. Ogiwara’s neighbors began to grow concerned for him. Next door to Ogiwara lived a wise old man. One night, the old man heard laughing and singing coming from next door. He peeked through a hole in Ogiwara’s wall. However, instead of a beautiful woman, he saw Ogiwara entwined in the boney arms of a skeleton. When Ogiwara spoke, the skeleton nodded its head and moved its arms and legs. When the skeleton’s jaw opened, a haunting voice came from where its mouth should have been. The old man was horrified.

As soon as day came, the old man called for Ogiwara. He warned Ogiwara that Otsuyu was really a ghost, and told him to go to a temple at once. Ogiwara heeded the old man’s advice. At the temple, Ogiwara discovered Otsuyu’s grave, with her old and tattered peony lantern draped across it. The priest warned Ogiwara that he must resist Otsuyu, and gave him a magical charm to place on his house, which would keep him safe from the ghost. Ogiwara rushed home and placed the charm on his door. The charm worked perfectly, and Otsuyu no longer came to visit Ogiwara.

Although he was safe, Ogiwara became despondent. He missed Otsuyu dearly. One night, days after her last visit, Ogiwara became drunk. He carelessly wandered to the temple where he discovered Otsuyu’s grave. At the temple gate, Otsuyu appeared to him, and led him to her home: her coffin. Later, when Ogiwara had been missing for some time, the priest opened up Otsuyu’s grave. Inside was the dead body of Ogiwara, wrapped up in the boney arms of a human skeleton.

Oiwa (from The Ghost Story of Yotsuya)

Oiwa was married to samurai named Iemon. It was not a happy marriage, for Iemon was a wasteful man and a thief. One day, Oiwa decided to leave her husband and return to her family home. Iemon followed after her, but was stopped by Oiwa’s father, Yotsuya Samon. Samon knew of Iemon’s misdeeds—that he had stolen money from his employer—and he demanded that Iemon divorce Oiwa. Iemon drew his sword and murdered Samon. Iemon returned to Oiwa and lied that a stranger had killed her father on the road. He begged her to reconcile, and he promised to avenge her father’s murder.

Some time after that, Oiwa became pregnant and bore Iemon a son. Times were hard. They had little money. Oiwa became sickly after giving birth, and Iemon grew resentful of Oiwa. Next to their home lived a rich doctor named Itō Kihei. He had a beautiful granddaughter named Oume. Oume was instantly attracted to Iemon, and wanted to marry him. The doctor loved his granddaughter and conspired to help her marry Iemon. He prescribed an ointment for Oiwa to help her recover from her sickness. In reality, it was a poison which horribly disfigured her face. Seeing Oiwa’s scarred face, Iemon’s resentment turned into hatred. Afterwards, Kihei suggested that Iemon divorce Oiwa and marry his granddaughter instead; if he were to marry Oume, all of the wealth of the Itō family could be his to inherit! Iemon was so disgusted by Oiwa’s face, and Oume was so young and attractive, that he agreed. Iemon began pawning Oiwa’s possessions, her kimono, her clothes—even their son’s clothes—to have enough money to marry Oume. Because he needed a legitimate reason to divorce his wife, Iemon hired his friend Takuetsu to rape Oiwa so that he could accuse her of infidelity.

On a prearranged night, when Iemon was out of the house, Takuetsu entered and approached Oiwa. Upon seeing her face, he was so frightened that he abandoned his orders. Takuetsu explained Iemon’s plan to Oiwa, and then showed her a mirror. Oiwa had not known what the ointment had done to her face. When she saw her reflection, she was horrified. She tried to cover the disfigurement by brushing her hair over it, but when she touched her hair, it fell out in large, bloody clumps. Oiwa went mad. She grabbed a nearby sword and punctured her own throat. As Oiwa lay on the floor bleeding to death, she repeatedly cursed Iemon’s name until she could breathe no more.

Oiwas’ body was discovered by Iemon’s servant Kohei. When Kohei delivered the news to Iemon, instead of become upset, Iemon was overjoyed. Kohei became suspicious of Iemon, but before he could do anything, Iemon murdered Kohei. He nailed Kohei’s and Oiwa’s bodies to a door, and disposed of them in a river. Afterwards, he made up a lie that Kohei and Oiwa had been sleeping together. He was finally free to marry Oume.

Oiwa’s curse did not wait long to take effect. On his wedding night to Oume, Iemon had trouble sleeping. He rolled over in bed and saw, right next to his face, the horrible, disfigured face of Oiwa’s ghost! He grabbed his sword and slashed out at the ghost. Just then, the illusion ended, and Iemon saw that it was not Oiwa he had cut, but Oume. His new bride lay dead on the floor. Terrified, Iemon ran next door to seek his new father in law’s help. However, when he got to the Itō house, he was confronted by the ghost of the murdered Kohei. Once again Iemon slashed with his sword, but no sooner had he done so than the illusion ended and he saw Itō Kihei’s slain body lying on the floor.

Afterwards, Iemon fled into the night, but Oiwa’s onryō pursued him. Everywhere he went, Oiwa’s ghost was there. Her ruined face haunted his dreams. Her terrible voice cried out to him for vengeance. She even appeared to him in the paper lanterns that lit his way. Eventually, Iemon ran into the mountains, where he hid in an isolated cabin. But Oiwa followed him there too. Haunted by Oiwa’s ghost, no longer able to tell nightmare from reality, Iemon descended into madness.

As scary as Japan’s modern day horror movies are, they are the result of a long tradition of ghost story telling that goes back much further than the invention of films. Sadako, Kayako, and the rest of the modern day J-horror ghosts wouldn’t be here if it wasn’t for the horror fanatics of Edo period Japan. In a way, the ghosts we love so much today are the direct descendants of ghosts like Okiku, Otsuyu, and Oiwa.  These ghosts and many more will appear in The Book of the Hakutaku, funding this October on Kickstarter!

Love Matthew’s Work? Here’s how to support him!

Do visit Matthew’s Kickstarter campaign to support his project, or become a sponsor on Patreon!

Matthew Meyer maintains yokai.com, an online encyclopedia of yokai and ghosts, and he runs a Patreon project where he continues to illustrate, translate, and share Japanese folklore. These ghosts and many more will appear in The Book of the Hakutaku, funding this October on Kickstarter!