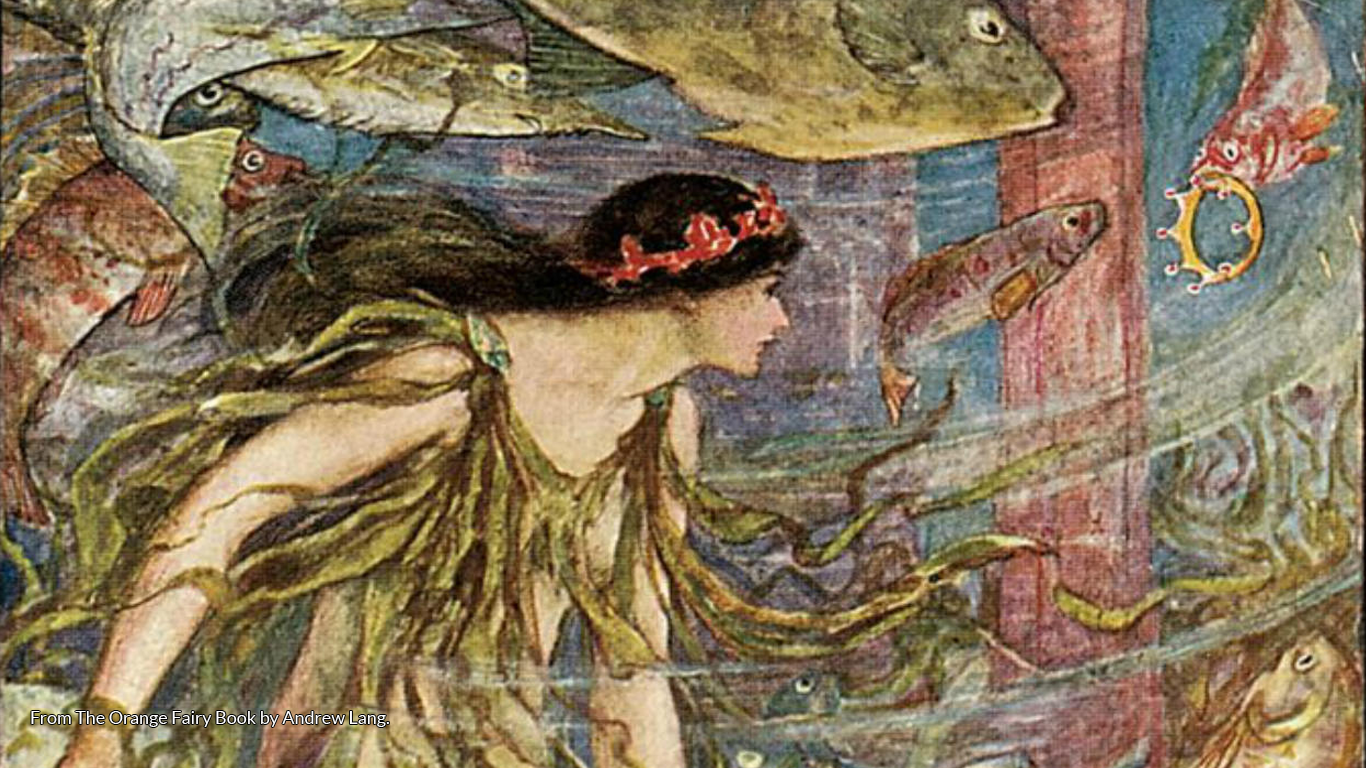 Although the names Brothers Grimm and Hans Christian Andersen are synonymous with fairy tales, Scottish literary critic Andrew Lang is also a favorite name who published hundreds of tales in his Fairy Books from 1889 to 1910. Lang and his wife collected the tales from a variety of regions, eventually publishing 12 books in the series, with each book named for a color. If you’ve never read one of Lang’s collections, you’re missing out on one of the most imaginative collections of fairy tales and folklore, and also this underrated tale I want to discuss: The Girl-Fish.

Collected by Andrew Lang for The Orange Fairy Book in 1910, The Girl-Fish was originally shared by Francisco Maspons y Labrós in his collection of tales, Cuentos Populars Catalans. Prior to working with Andrew Lang’s work, I had never come across his tale, but I quickly realized it contained as much adventure as other beloved fairy tales such as Beauty and the Beast and East of the Sun, West of the Moon. Indeed, while the popularity of fairy tales has given rise to countless retellings for young adults, children and adults, I only found one book inspired by this tale.

The Girl-Fish contains all of the elements of the classic fairy tales, such as a magic kingdom, enchanted maidens, and animal transformation; together they come together to make a thrilling tale with a romantic twist. While fairy tales sometimes have princes go on quests, The Girl-Fish features a selfish girl undergoing a quest where she becomes the heroine, and learns a valuable lesson in compassion and kindness, two traits that fairy tales often teach us.

Once upon a time there lived, on the bank of a stream, a man and a woman who had a daughter. As she was an only child, and very pretty besides, they never could make up their minds to punish her for her faults or to teach her nice manners; and as for work– she laughed in her mother’s face if she asked her to help cook the dinner or to wash the plates.

The Girl-Fish at the heart of the story is actually a nameless girl who has been transformed into a fish. She was quite useless to her parents and idled her time while they worked, and only when her mother was truly exhausted, did she help out. After mending a fishing net, the girl encounters a beautiful fish that she wants for her dinner.

‘Well, you are a beauty!’ she cried to herself; but the fish looked up to her and said:

‘You had better not kill me, for, if you do, I will turn you into a fish yourself!’

The fish, like the fish in many fairy tales, is magical, and warns the girl not to kill her, for the girl will be turned into a fish herself. The girl doesn’t heed the warning and brings it home to her mother, who also warns her not to eat the fish. She eats the fish and immediately finds herself transformed into a fish.

‘I am not a fish at all,’ said the new-comer, swallowing a great deal of salt water as she spoke; for you cannot learn how to be a proper fish all in a moment. ‘I am not a fish at all, but a girl; at least I was a girl a few minutes ago, only–‘ And she ducked her head under the waves so that they should not see her crying.

When reading the story for the first time, I thought that the girl would simply be transformed into a fish, made to do a few tasks, and then once she had learned her lesson, she would simply be given her human form, but the tale has so much more to offer the reader. The princess is active, and goes on her quest not for love, but for redeeming herself for a wicked deed.

Now, when she plunged deeper her eyes fell upon strange things.

Wedges of gold, great anchors, heaps of pearl, inestimable stones, unvalued jewels– all scattered in the bottom of the sea! Dead men’s bones were there also, and long white creatures who had never seen the light, for they mostly dwelt in the clefts of rocks where the sun’s rays could not come.

In a moment the small, slimy body disappeared, and in its place stood a beautiful beast with branching horns and slender legs, quivering with longing to be gone. Throwing back her head and snuffing the air, she broke into a run, leaping easily over the rivers and walls that stood in her way.

The first shape the girl-fish takes is of a deer, and she encounters the prince, who falls for her immediately, sensing that the doe’s eyes are that of an enchanted maiden. After leaving the prince, the girl-fish uses the forms of an ant, a monkey and a parrot to steal the crown from the giant, but the giant asks for something in return. She must retrieve a collar of blue stones from a historic arch, but like most fairy tale giants, the giant is greedy, and asks the girl-fish to also bring him a crown of stars. She succeeds, and brings the crown back to the queen of the fishes and they both revert back to their human selves, but the prince, now king, desires the enchanted deer he met long ago …

‘By your favour let me go, and do not kill me,’ said the deer, turning to the prince with tears in her eyes, ‘for I have far to run and much to do.’ And as the prince, struck dumb with surprise, only looked at her, the deer cleared the next wall and was soon out of sight.

A picture book of the tale was last published in 1995, and is now out of print. Known as The Girl, the Fish and the Crown, it features beautiful illustrations of the tale; aside from this and a new illustration of the story in a recent reprinting of The Orange Fairy Book by the Folio Society, the tale receives little attention. My hope is that you read this fairy tale and are swept up in the magic and sentiment it delivers.

There was silence between them for a moment, then, turning away his head, the prince answered gently:

‘I have fallen in love with a beautiful deer!’

Bri Ahearn is a freelance writer and is the Editor-in-Chief for Fairytalez.com, a free website dedicated to sharing fairy tales and folktales from around the world, with over 2,100 tales and counting. You may find her at @ftalez.