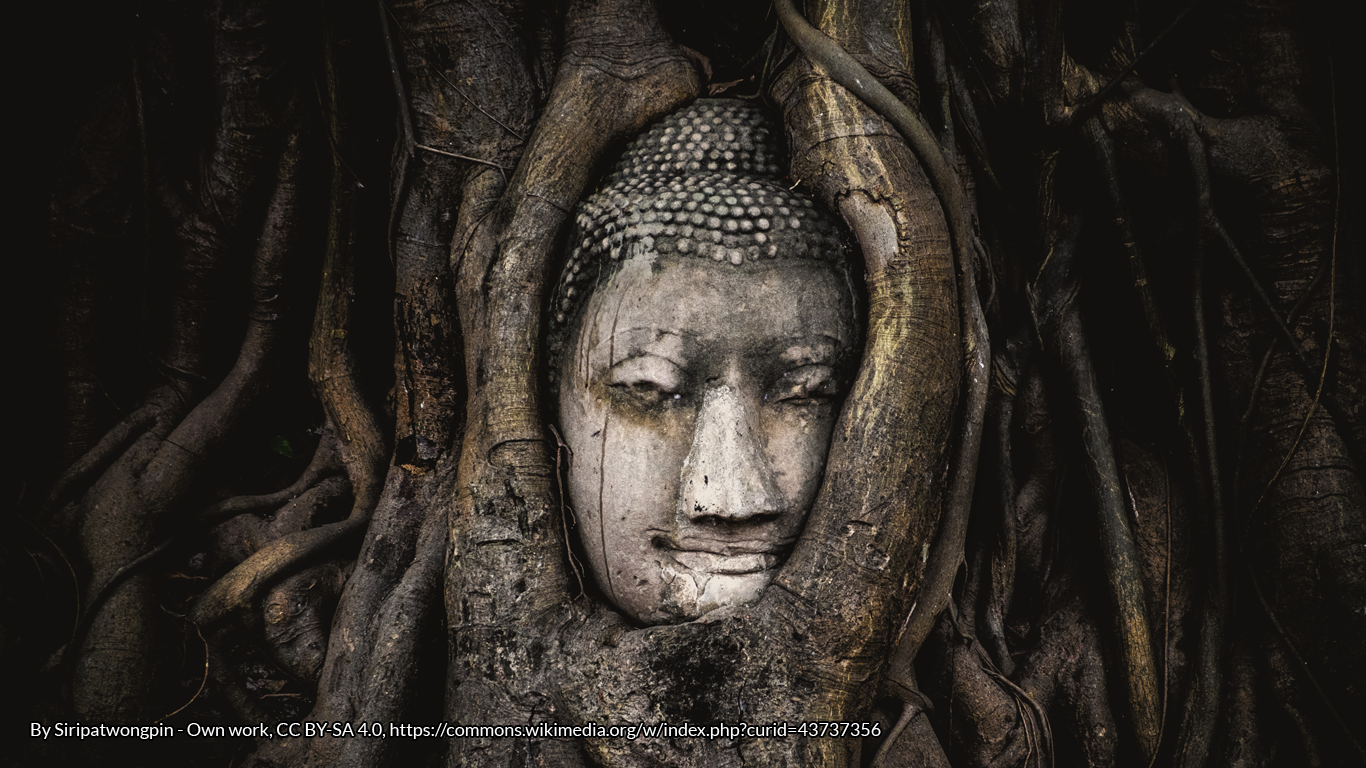 No plants feature so often in folklore, in so many places, as fig trees. There’s a biological basis to many of these stories. The fig trees, collectively known as “Ficus” species, grow in many countries worldwide. As my new book Ladders to Heaven — published as Gods, Wasps and Stranglers in North America — shows, they feature in stories as abodes of gods, places of prayer, homes of spirits, and subjects of taboos. Here are some of my favourites.

Fig trees feature in origin stories from across the world. The leaves of one fig tree clothed Adam and Eve. Another fig tree’s roots saved the twin babies Romulus and Remus from drowning in the River Tiber. Its crown provided shelter as a she-wolf suckled the boys, who would go on to found Rome. In India, the Kuttia Kondh people say their goddess Nirantali created the first people’s tongues from the fluttering leaves of one fig species (Ficus religiosa), and that another fig species (Ficus benghalensis) provided the people’s first shelter and food.

In ancient Egypt, pharaohs believed that when they died their souls would encounter a Ficus sycomorus fig tree at the edge of the desert, and that the goddess Hathor would emerge from the foliage to welcome them to heaven. Fig trees are also associated with many Hindu deities. The roots of one Indian species, Ficus religiosa, represent Brahma the Creator, the leaves Shiva the Destroyer, and the trunk Vishnu the Preserver.

In the traditional religion of Kenya’s Kikuyu people, making offerings at sacred fig trees is the way to communicate with God. For Buddhists, no plant is more important than the fig tree beneath which the Buddha attained enlightenment.

No trees are home to a more motley mix of supernatural creatures than the strangler figs, whose eerie, aerial roots are adept at seizing imaginations in their grip. Diverse cultures around the world say these trees shelter angels and fairies, gods and ancestral spirits, ghosts, and other malevolent creatures. In the folklore of the Philippines, they include giant tree demons called kapres, goblin-like duendes, and the half-human, half-horse tikbalang.

In Australia, aboriginal stories warn of an altogether more fearsome strangler fig-dweller, the yara-ma-yha-who. This manlike creature has bulging eyes and a gaping, toothless maw. When hungry, it will leap out of its fig tree onto an unsuspecting traveller. Its fingers and toes end in flattened discs, through which it sucks the blood of its victims. In some stories, fig trees also protect people from malevolent creatures. In Greek mythology, the branches of one fig tree saved Odysseus from being sucked into the deadly whirlpool created by the maw of a hungry sea monster Charybdis.

Look at the full moon in Vietnam and you might see Cuoi, a young man who was carried there by a magical fig tree. Travel to India, and you may hear of an immortal fig tree surrounded by the bleached bones of pilgrims, whose devotion led them to climb the tree and throw themselves to their deaths.

Another story from India tells how a sage called Kabir was brushing his teeth with a twig. When he discarded his toothbrush, it transformed into a gigantic fig tree whose crown spread to cover a hectare of land. That tree was a banyan (Ficus benghalensis), and you can visit it today. An even bigger banyan, large enough to shelter 20,000 people, is said to have grown from the spot where a woman threw herself onto her husband’s funeral pyre more than 500 years ago.

In the Amazon rainforest of French Guiana, a story told by Wayampi people warns against adultery. A man who found his wife had taken a lover smeared the adulterers in a magic ointment and threw them from a roof. A giant strangler fig grew from their broken bodies.

Around the world, many cultures have established taboos against harming fig trees with warnings of grim fates for anyone who breaks the rules. The Betsileo people in Madagascar say anyone cutting down a sacred fig tree risks misfortune – perhaps a family member will suddenly go blind, or a new mother will fail to lactate. In Guatemala, there is a story of a man who was turned into a monkey just for trying to climb a sacred fig tree.

Much of the rich mix of folklore associated with fig trees has a basis in biology. These plants are providers of great gifts, including medicines and materials, and of course tasty fruit. They are also ecological linchpins, sustaining more wild birds and mammals than any other fruit trees.

Long ago, and across much of the world, any group of people who protected wild fig trees would have benefitted as a result. More recently, when people began farming for the first time, fig trees were among the first plants to be cultivated. Little wonder these trees have been woven so often into the tapestry of faith, fable, and folklore.

Fig trees have survived for at least 80 million years. They have influenced humanity and the world around us in profound ways. They will no doubt feature in the folklore of the future, too.

Mike Shanahan is a freelance writer and former rainforest biologist. You can follow him on Twitter, and visit his website. Mike has also written a book about fig trees, published as Ladders to Heaven in the UK and Gods, Wasps and Stranglers in the U.S.