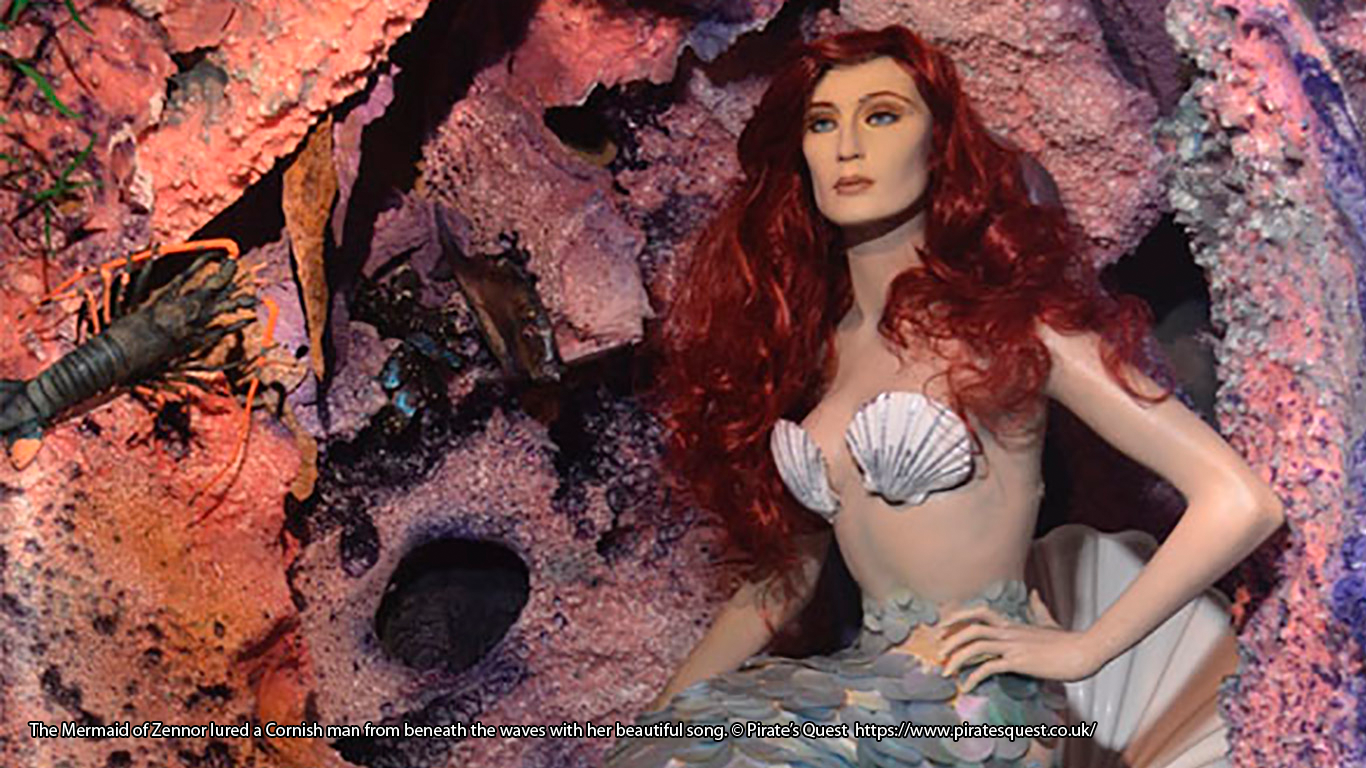 Ahoy there folks! Captain Calico Jack here, famous eighteenth century swashbuckler and resident captain here at Pirate’s Quest in Newquay. Sailing around the world, I’ve heard my fair share of folklore, but I’m particularly impressed with the amount of local legends I’ve heard about since making port in Cornwall. From King Arthur to Jack the Giant Killer, this county has an array of famous tales, but being a man of the sea I have a special place in my heart for Cornish mermaids!

In honour of the many mermaids of Cornwall, I have decided to take a break from my usual pillaging and plundering and compile a list of the top 5 Cornish mermaid tales I’ve heard.

Nowadays mermaids are famed as being beautiful, colourful creatures, but let me tell you that I know from experience this isn’t always the case. A particularly sinister mermaid is said to dwell near Mermaid’s Rock, near Lamorna in West Cornwall. There are plenty of local stories of a mermaid sitting on the rock, combing her hair and singing, using her angelic voice to lure fishermen to their deaths. However, there are some who believe that her voice is actually a warning of approaching bad weather.

4 – THE MERMAID OF SEATON

Seaton lays on the south coast of Cornwall, not far from Downderry. Legend tells how this location was once a thriving fishing town, until the day it became cursed by a powerful mermaid. A local man is said to have insulted the mermaid (and believe me that’s not something you want to do – I learnt that the hard way!) As an act of revenge, the mermaid used her powers to cause the town to be swallowed by sand!

3 – THE MERMAID OF PADSTOW

Along the treacherously rocky north coast, the port at Padstow provided safety to sailors docked there. That was until one day a visiting boat made the grave error of shooting a mermaid. After diving beneath the water momentarily, she rose up above the waves, held out her right hand, and made a vow. A storm appeared from nowhere as she cursed the port, promising that from that day forth the port would suffer bad fortune. The storm she summoned wrecked numerous ships and created the sandbank now known as the Doom Bar. To this day the port can now only accommodate small vessels.

Morvena once sat on a Cornish beach combing her long hair, as many mermaids do. Morvena became so engrossed in her personal grooming that she neglected to notice that the tide had gone out, leaving her stranded. Luckily for her, a farmer heard her cries and carried her back to the water’s edge so she could return to her family beneath the waves. Morvena was so grateful that she granted the farmer three wishes. For his first wish he asked for protection against witchcraft and evil, for his second, that he might be immune to disease and illness, and for his third wish he asked that these gifts may pass on to his children. Morvena not only made his wishes come true, but because she was so impressed with his wish choices she also gave him her comb. If ever he needed her again, she said he must head to the shore and comb the waves three times whilst repeating her name.

1 – THE MERMAID OF ZENNOR

Morveren, known in Cornwall as the Mermaid of Zennor, was one of the daughters of Llyr, King of the Ocean. Every Sunday, disguised as a human, Morveren visited St Senara’s Church to listen to a local man, Matthew Trewhella, sing. Some versions of the tale have Matthew drawn to the church to hear Morveren sing, but all the stories end with Matthew and Morveren going to Pendower Cove to start a life beneath the waves together.

Years later a mermaid, assumed to be Morveren, asked a sea captain to remove his anchor from her door as she wished to see her husband, Matthew, and children.

The villagers of Zennor have even carved a mermaid chair which can still be found in St Senara’s Church today, over 600 years later. Some say they can still hear the lovers singing in Zennor.

If you’ve enjoyed reading about the magical sea-dwelling creatures of Cornwall, then why not pay a visit to Pirate’s Quest in Newquay, an interactive walkthrough experience with a land dedicated to the myths and legends of the county. You can find out more information at www.piratesquest.co.uk.

Pirates never reveal their sources – snitches end up in ditches!

Jack Rackham was the quartermaster on Charles Vayne’s warship, the Neptune. When Vayne cowered, fighting a French Merchant vessel, Rackham mutinied and led the crew to victory. With mutiny on their heads, Rackham and the crew then turned to piracy and never looked back. Gaining the nickname ‘Calico’ for his extravagant clothes, and recruiting all English captives to his crew, he became a very famous pirate indeed. Visit Captain Calico Jack at the Pirate's Quest website or follow him on Twitter.