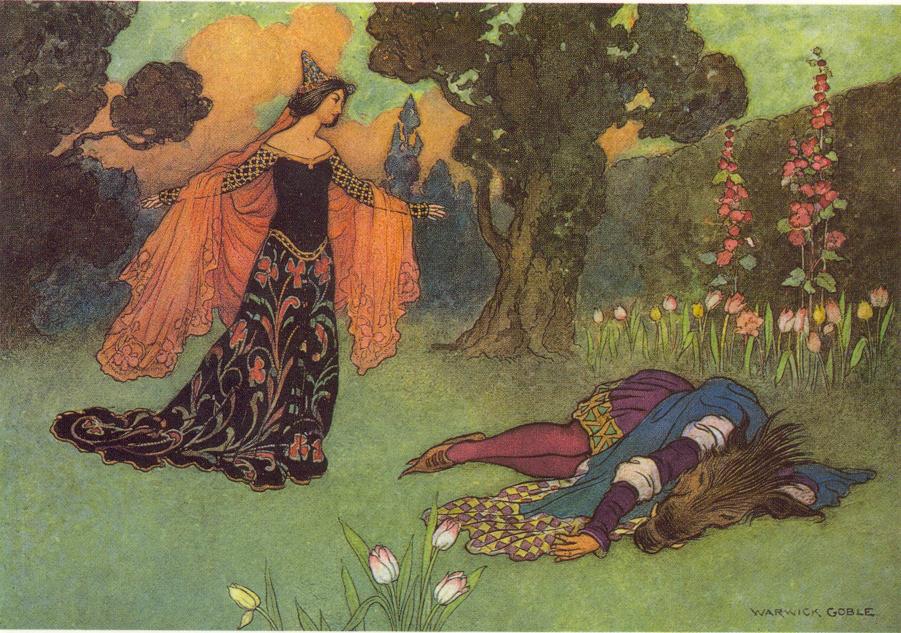 In 1740, French author Gabrielle-Suzanne Barbot de Villeneuve wrote and published a collection of stories entitled La Jeune Ameriquaine et les Contes Marins. Within, was the fairy tale La Belle et la Bête. Widely viewed as the oldest version of Beauty and Beast, La Belle et la Bête contained all of the now familiar elements of the much beloved story. There was a handsome prince cursed to live out his days as a monstrous beast and a courageous beauty who consents to be his prisoner in order to save her father.

As Beauty comes to know the Beast better, she soon realizes that, though he is monstrous to look upon, he has a good heart and a generous spirit. Nevertheless, she refuses the Beast’s daily proposals of marriage. It is only after going away from him to pay a visit to her father that she truly accepts just how little a handsome appearance matters when choosing a husband. In an abridged version of the tale, written by Jeanne-Marie LePrince de Beaumont in 1756, Beauty explains:

“It is neither wit, nor a fine person, in a husband, that makes a woman happy, but virtue, sweetness of temper, and complaisance, and Beast has all these valuable qualifications.”

No sooner does she declare her love for him, than the Beast is transformed into a handsome prince. The prince informs her that a wicked fairy had cursed him to remain a monstrous beast until a young and beautiful girl agreed to be his wife. The spell now broken, Beauty and her handsome prince marry and proceed to live happily-ever-after.

Taken as a whole, La Belle et la Bête appears, on its face, to be more of a morality lesson than a fairy tale. A young woman learns which qualities are most important in a prospective husband and, only by choosing wisely, does she earn her happy ending. This is a lesson which many an eighteenth and nineteenth century parent would have sought to drive home to their daughters. A lesson on choosing a worthy (though possibly less attractive) man instead of a handsome rake or a scoundrel.

However, there was far more to the tale of La Belle et la Bête than simple advice to young ladies that they must look deeper than surface appearances. In fact, according to one Victorian scholar, tales of humans cursed to live as animals owed more to the ancient belief in metempsychosis than to morality and romance. Metempsychosis, or the transmigration of souls, was the idea that a human soul did not perish at death, but instead moved on to another physical body—often that of an animal.

In his 1872 book Traditions, Superstitions, and Folklore, Charles Hardwick explains the reasoning behind metempsychosis during the time of the Druids, writing:

“It is especially the object of the Druids to inculcate this—that souls do not perish, but, after death, pass into other bodies; and they consider that, by this belief more than anything else, men may be led to cast away the fear of death, and to become courageous.”

The belief that a soul could migrate into the body of another creature was added incentive to treat creatures kindly. Or, at least, not to commit murder or other savageries. To explain this, Hardwick quotes from an earlier essay on the origins of the religion of the Druids:

“It appeared to Landor that Pythagoras, who settled in Italy, and had many followers in the Greek colony of the Phocaeans at Marseilles, and engrafted on a barbarous and bloodthirsty religion the human doctrine of the metempsychosis; for that finding it was vain to say, ‘Do not murder,’ as none ever minded that doctrine, he frightened the savages by saying, ‘If you are cruel even to the beasts and insects, the cruelty will fall upon yourselves; you will be the same.’”

Humans who have been transformed into animals figure in many stories which pre-date the first publication of La Belle et la Bête. As Hardwick points out, Shakespeare “has several remarkable references to this superstition.” For example, during one scene in Hamlet, Ophelia recites a portion of the legend of The Baker’s Daughter in which Christ, in the guise of a beggar, visits a baker’s shop, begging for a loaf of bread. When the baker’s daughter refuses to feed him, he changes her into an owl. As Ophelia sings:

“They say the owl was a baker’s daughter. Lord, we know what we are, but we know not what we may be.”

Some critics argue that Beauty and the Beast promotes the idea that women should be submissive and self-sacrificing. Still others claim that the story is primarily a means of tackling the subject of conflict between the aristocracy and the bourgeoisie. Interpretations seem to vary, depending on which translation or retelling of the fairy-tale one reads—and depending on the academic or professional lens through which a particular critic views the story.

Despite all of its magical trappings—and all of its many interpretations—at its heart La Belle et la Bête remains a simple and timeless fairy tale. It has since gone on to inspire multiple books, movies, musicals, and even my own Victorian romance novel, The Lost Letter. The idea that one must look past appearances to see the true value of a person continues to resonate. And the belief that kindness and compassion can unlock a person’s authentic beauty is as true today as it was in 1740 when Gabrielle-Suzanne Barbot de Villeneuve first published her now legendary story.

The wonderful Mimi Matthews has offered a copy of her amazing new romance novel — based on ‘Beauty and the Beast’ — for a lucky #FolkloreThursday newsletter subscriber this month!

‘England, 1860. An impoverished Victorian beauty is unexpectedly reunited with the now beastly earl who once broke her heart. Will they finally find their happily-ever-after? Or are some fairy-tale endings simply not meant to be?’

Sign up for the #FolkloreThursday newsletter to enter (this book will be featured in the October newsletter — valid October 2017; UK & ROI only).

Griswold, Gerry. The Meaning of Beauty and the Beast: A Handbook. Plymouth: Broadview Press, 2004.