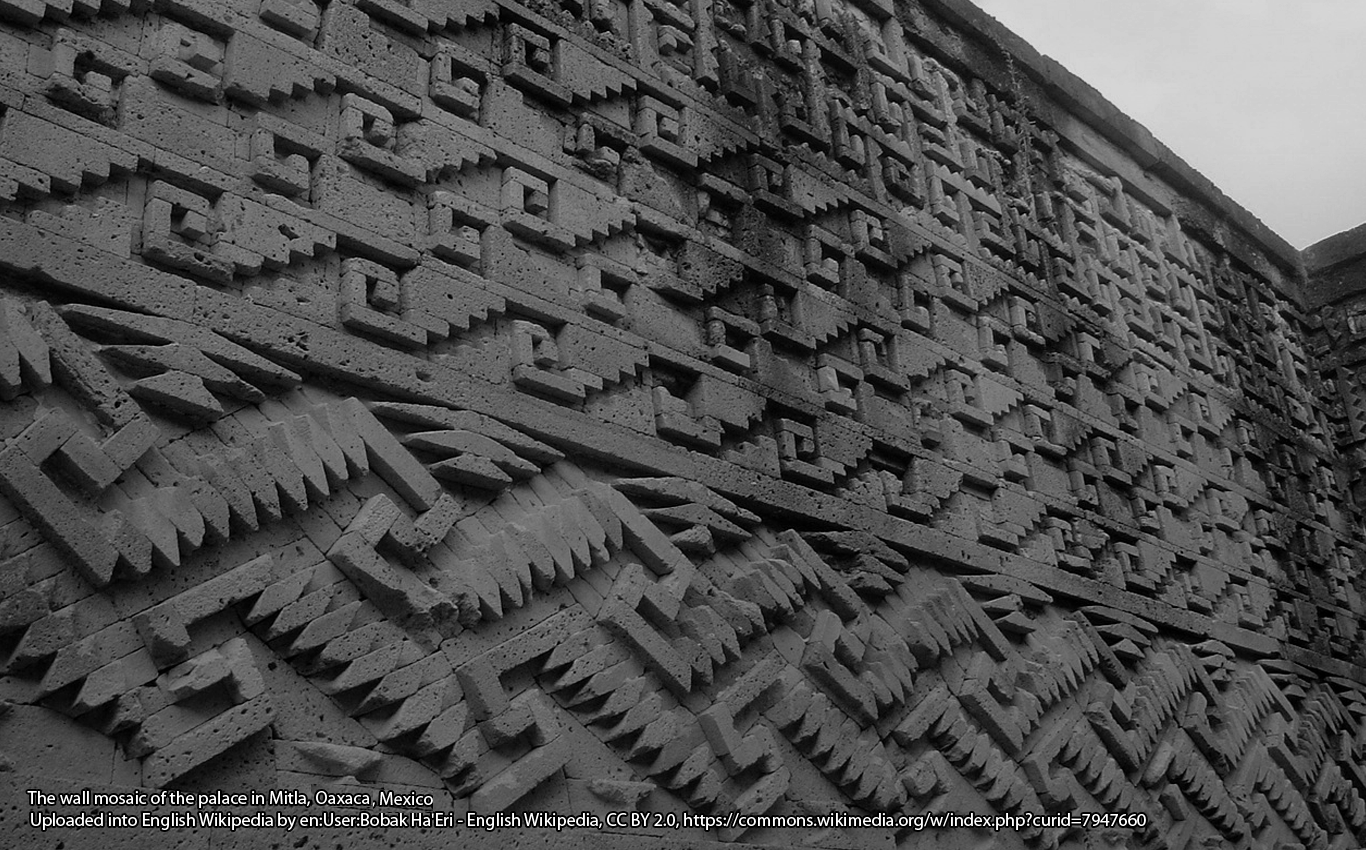 “The appearance which the ruins present, and the impression which they create, are certainly very striking. They stand in the midst of this gloomy and cheerless landscape, like the relics of another world. Their ornamentation also, composed exclusively of geometric forms, without any human or animal shapes whatsoever, the absence of vegetation, the dismal silence that reigns around them, all contribute to give an air of weirdness which overwhelms and bewilders.”

These are the words of Swiss explorer Francis Bandelier, who visited the town of Mitla in the Mexican state of Oaxaca in 1881. While Bandelier’s comments are ethnocentric, he may have been on to something in observing the “air of weirdness” that hovers around Mitla’s copious ruins. These ruins stand at the center of local legend, giving rise to lore that is both inseparable from Mitla’s landscape and Mexico’s broader, complicated history. These “relics of another world” form the backdrop of many legends; sites of the uncanny, the ruins on occasion become more than just emotionally charged places and acquire an agency of their own, possessing locals and demanding they pay their dues.

Mitla is a Zapotec town in Oaxaca, a state in southern Mexico. Its name is derived from the Aztec place-name, Mictlan, which means, “land of the dead,” and is also incidentally the name for the Aztec underworld. In part, this also explains why when the Spanish arrived in the middle of the 16th century, they exhibited fear and reluctance in relation to Mitla, even going as far as to refer to it as “infierno,” Hell on earth. Originally, however, Mitla was called Lyobaa, a Zapotec word that roughly translates to “place of the souls.” The town was and continues to be incredibly cosmologically significant as the place where all Zapotec souls continue to be “deposited.” So, as one meanders the streets of Mitla, you may be treading quite literally on a stratigraphy of souls.

Ghosts, Devils, and the Ancient Ones

With a name that was once crudely translated to Hell, it’s no surprise that Oaxacan ruin lore is a fascinating remix of pre-Hispanic symbols and Spanish colonial ideology inextricably tied to place. Here there be stories of spirits and demonic activity at Mitla’s palatial ruins, an archaeological site you can visit if you travel to Oaxaca. In journeying to any local cave—sacred pre-Hispanic portals to the underworld—you may also encounter the Devil himself lurking about. Old Beelzebub, in true Faustian fashion, is known for tricking individuals into selling their souls in exchange for treasure that, once acquired, turns to dust.

Christian imagery has not quite replaced pre-Hispanic imagery in Oaxacan lore and legend. For example, there is the case of Mitla’s Old Woman Sus Giber, a mythical maternal figure and member of the original Zapotec pantheon. In some stories, Sus Giber is “Old Stone Woman,” one of los antiguos, the Ancient Ones. The Ancient Ones are said to be from the twilight era, a time of total darkness—Mitleños understand this to mean the temporal order which preceded ours. As Earth moved from one temporal order to the next, the sun rose and “destroyed” the Ancient Ones to make room for the next order. The Ancient Ones, purported builders of Mitleño monumental heritage, were either petrified by the light or retreated underground to live in Mitla’s subterranean tunnels – the same tunnels that frightened the Spanish to such a degree that they holed up these entrances.

Sus Giber never made it underground. Petrified by the new sun’s light, she turned to stone right outside of the sacred mountain, Guirún. Despite this, as a supernatural, she may still be invoked before the mouth of caves or in the ruins. The problem is that Sus Giber has mostly been displaced by the legends revolving around Satan. The choice to use “displace” is deliberate. Both Sus Giber and the Devil simultaneously co-exist around caverns and ruins—the visitor simply never knows who may appear to do their bidding!

“The dead are here, they are always here. Don’t you know about the little boy and his flute?” says Armando Méndez Quero, an artist, storyteller, and shopkeeper. “He was always playing music, walking the streets here. One day he dropped dead of fright on account of the ghosts. He asked for a cigarillo from two women standing by the calvario and the ruins. When they revealed themselves to be fantasmas, he died. Now, he is damned to follow the apparitions for eternity. You can still hear the boy’s flute at night around the ruins.”

The trope of the unwitting encounter with a supernatural being is a key feature of Mitleño legend. Cornerstones of Oaxacan folklore, supernaturals live among us easily and reveal themselves erratically. While supernaturals occasionally take the form of Zapotec mythical figures, they are more often than not ghosts, devils, or a fluid category they call “the dead” – tangible spirits. To quote Armando again, “Any one you meet on the street might, in fact, be un muerto o un aparecido (one of the dead or an apparition).”

Possessed by Stones: Dreams and Madness in Ruin Lore

In most instances of Oaxacan ruin lore, the landscape forms the backdrop for supernatural activity and uncanny encounters. Yet what is quite possibly most unique about Mitla are the stories where the landscape—or, rather, the ruins themselves – do the bewitching. There are multiple accounts of Mitla’s ruins haunting locals through disturbing and vivid dreams. According to several friends, ruins haunting people through dreams often takes a dark turn. As the ruins reappear in dream after dream, the person is said to first be embrujado – bewitched – before they are ultimately deemed possessed. Being possessed by the ruins occurs when dreams turn into nightmares and the individual spirals out of control. In every instance where the ruins have possessed people through dreams, the individual descends into an atypical form of madness. They are struck with “ruin envy” and cannot rid their minds of the ruins. This form of possession is so serious that members of the community must seek help from local shamanic healers. The only cure is to take the afflicted to the ruins and perform a cleansing ritual where they must ask to be released from the ruins.

We can read these accounts simply as stories, a part of a larger conglomerate of folklore, or they can be interpreted as a reaction to the ways that history is produced and managed in Mexico, and perhaps more broadly. In petitioning the ruins for a release, the possessed begs the most profound and emotionally laden symbols of their pre-Hispanic past to be, ironically, dispossessed. Those ruins that impress themselves so keenly on locals and visitors alike crouch behind gates, managed by an institution that controls access to the ruins in the name of patrimony and preservation. The institution safeguards Mitla’s monumental heritage to ensure it is there for future generations, but in controlling access to these ruins, many Mitleños loudly expressed how they felt dispossessed by these ruins and their own history. From dispossession flows a ghostly possession – in the shadow of fraught social relations and beneath the burden of history, locals connect with their complicated material landscape in order to feel again.

Author’s Note: Leathem wishes to acknowledge that these stories, while open and available to share with the public, are the intangible heritage of the Mitleños in Oaxaca, Mexico. Without their generosity (or the memories of more senior generations), these stories would not exist in textual form nor would they appear here on Folklore Thursday. So, while Leathem is the author of this text, the stories therein are the irrevocable intellectual property and history of the people of Mitla, Oaxaca. Oral traditions are not conventionally conceived of as ‘property’ in Mexico. Yet over time, the generational transmission of knowledge has been, more often than not, interrupted or co-opted by outsiders of the community, meaning it is of the utmost importance that Mitleños come to ‘re-possess’ that which belongs to them, becoming stewards of a robust heritage that has entertained the West and escaped the rest. Monographs and articles about Mitla’s history and culture circulate, but are only occasionally translated into the Spanish and re-presented to the community. The accompanying translation of the text below emerges from a personal request made to Leathem where these sentiments – of outsiders knowing more about the community than the community itself – were expressed. The Spanish translation, alongside several other projects, is one of the ways the author hopes to rectify the inequality inherent in both the acquisition of – and access to – historical knowledge throughout Mitla. Leathem also wishes to thank Camilo León Quijano, Alonso Zamora Corona, and Paulina Pezzat for looking over the translation. Any errors, however, remain her own.

A Note About This Translation: The Zapotec translation of Leathem’s essay is part of a broader digital humanities project entitled, “Este Lugar Tiene Muchas Historias,” funded by a Digital Knowledge Sharing Fellowship from the American Philosophical Society. Co-conceived with Guillermo Ramón Celis, the project repatriates the archive of folklorist and anthropologist Elsie Clews Parsons to the Mitla community through a combination of translation and digital mapping – visually linking translated segments of Parson’s fieldnotes to the locations they describe in Mitla through a community-curated online map.

Francis Bandelier, 1884, Report of an Archaeological Tour in Mexico, 1881. Boston.

Hilary Morgan Leathem is a folklorist, writer, and PhD candidate in Sociocultural Anthropology at the University of Chicago. Before earning her MA in 2015 at the same institution, she received an Honors BA in History and Anthropology from the University of Illinois-Chicago and worked at the Field Museum of Natural History. She has conducted research in Oaxaca since 2008 (first as an archaeologist), and recently returned from a year of fieldwork in Mitla and Oaxaca City as a 2017-2018 Fulbright-Hays scholar. Her dissertation, “Heritage Dispossessed: Haunting, Theft, and the Making of Monumental Heritage in Oaxaca, Mexico,” traces the conceptual formation and mobilization of heritage in Oaxaca while also attending to the moral and affective valences of heritage practices. She occasionally writes cultural criticism and poetry. She also enjoys collecting ghost stories and old things. Follow them on Twitter.