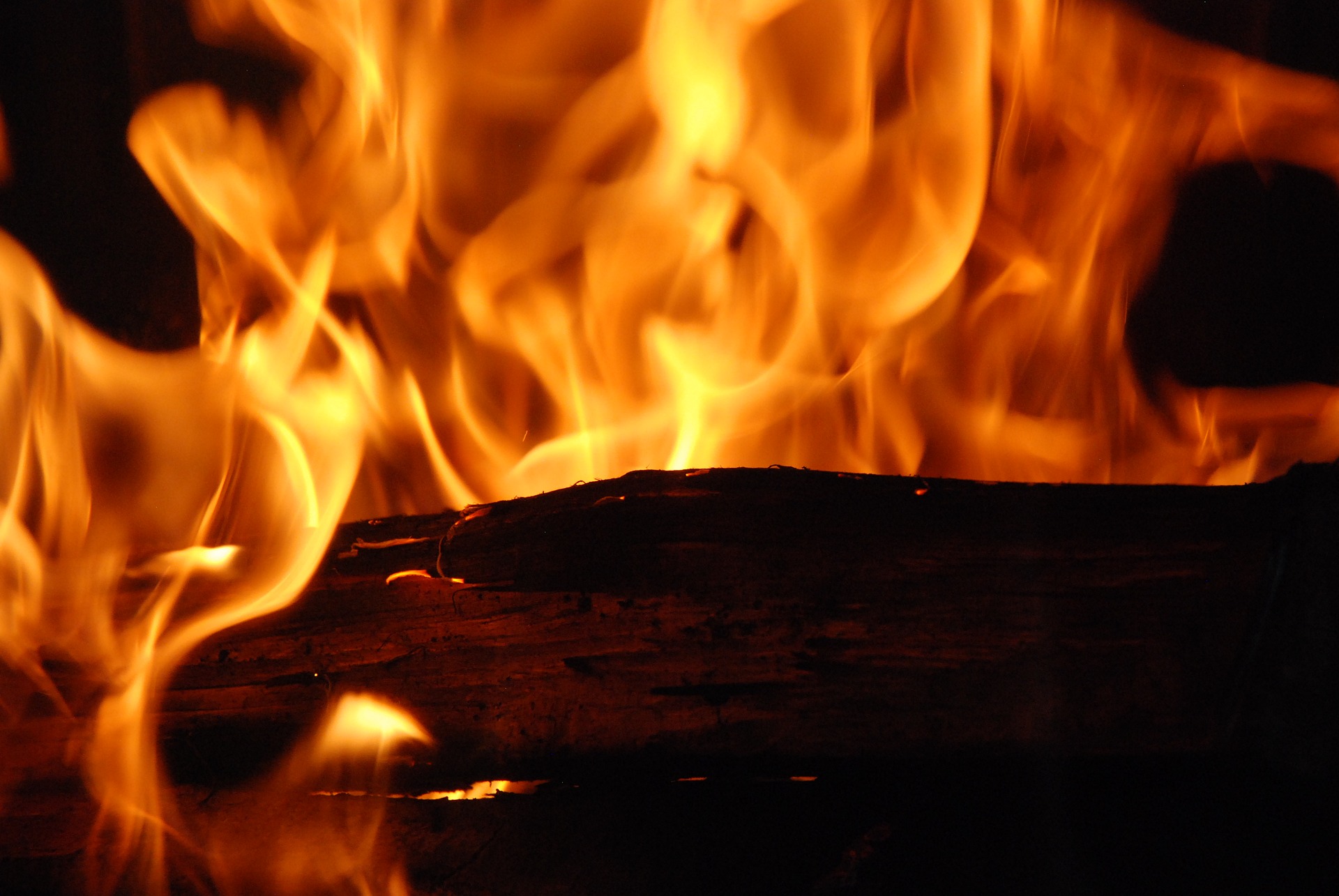 Plants play a major part in the many customs surrounding the Christmas festivities. The Yule log for example, was essentially associated with Christmas Eve, for on the evening of that day it was traditional to transport the log to the fireplace, ignite it and allow it to burn for at least 12 hours if ill-luck was to be avoided. The log was as large a piece of wood as could be conveniently burned, sometimes consisting of the root of a large tree together with the lower part of the trunk. The custom was celebrated in various counties: Cornwall, Dorset, Somerset, Yorkshire, Cumberland, Derbyshire, Durham, Herefordshire, Lancashire, Norfolk, Northamptonshire, Nottinghamshire, Shropshire, Hertfordshire, Staffordshire, Westmorland and Worcestershire.

A 17th century reference to the celebration of the custom in West Yorkshire, states that on Christmas Eve the people brought in a large Yule log or “Christmas block” as it was often called, set it on the fire, drank their ale and sang “Yule, Yule, a Pack of new cards and a Christmass stool.”[i] In the northern counties it was the custom in the 18th century to “light up Candles of an uncommon Size, which were called Christmas-Candles, and to lay a Log of Wood upon the Fire, which they termed a Yule-Clog or Christmas Block. These were to illuminate the House, and turn the Night into Day; which Custom in some Measure, is still kept up in the Northern Parts.” In Lincolnshire the Yule log was formerly placed in the large fireplace of the hall on Christmas Eve, and it was considered lucky to save some part of it, either to burn with the new one next year or until New Year’s Day. This belief was also extant in northern counties, where a fragment was saved and stored under a bed until the following Christmas. It was believed to protect the house from fire and if a small piece was thrown into a fire it would be quenched.

Surviving records show that the place of the Yule log was taken by the ‘ashen’ (sometimes ‘ashton’) faggot in Devon and parts of Somerset and burnt in many farms on Christmas Eve. Ash branches were bound together by as many binders (often of twisted hazel) as possible. It was a traditional custom for cider to be called for and served to the company as each band burst in the flames. In Derbyshire where the faggot was also burned on Christmas Eve, it was made of small sticks bound together by a cord or withies. The ceremony was locally held as a commemoration of the belief that the infant Jesus when born was dressed besides a fire of ash sticks.

At what period mistletoe came to be recognised as a Christmas decoration is uncertain. There are carols extant in praise of holly and ivy of an even earlier date than the 15th century, but allusions to mistletoe were rare in this early period. Herbalist William Coles recorded that mistletoe was “carried many miles to set up in houses about Christmas time, when it is adorned with a glistening white berry.” Until the advent of the Christmas tree in the 1840s, the most widespread custom was that of the ‘kissing-bush’ and mistletoe has an association with this. While in the orchards of Herefordshire and Worcestershire there were large supplies, in the northern counties and in Cheshire, Nottinghamshire, Derbyshire, Shropshire and Lincolnshire, mistletoe was rarely found. In these counties the ‘kissing-bush’ served as a substitute for the mistletoe bough, but efforts were made to have at least a small sprig for the bush.

This bush was of various forms, ranging from a bush of holly, box or other evergreen, decorated and suspended from the ceiling, to a large structure constructed on a frame of two crossed hoops decorated with holly, ivy and other evergreens, plus coloured ribbons, supporting red apples, oranges, trinkets, small dolls (often representing the Holy Family) and candles, with mistletoe hanging from the bottom. During the making it hung from a hook, but never the one on which it would later hang as this was considered sacred to the finished bush. In Devon, a somewhat different form is recorded consisting of a small gorse bush which was dipped in water, powdered with flour and decorated all over with holly berries.

Mistletoe and its associations with the Christian Church are ambiguous. Theoretically it was banned by the clergy for its association with pagan rites, yet there are instances of its being carried into church as part of the Christmas festivals. In Staffordshire at the Collegiate Church of St. Peter’s, Wolverhampton there was a custom, until the 19th century of placing mistletoe on the altar on Christmas Eve to be blessed by the priest after which it was distributed to the people, by whom it was believed to possess medicinal properties, especially in cases of fever. Extracts from Staffordshire parish registers also confirm this custom:

Until the early 18th century, on Christmas Eve it was the custom at York Minister, Yorkshire, for mistletoe to be carried to the high altar and a general pardon proclaimed “to all sorts of inferior and even wicked people at the gates of the city, towards the four quarters of heaven.”

As well as mistletoe, other plant materials traditionally associated with Christmas decorations in churches and homes include holly, laurel, rosemary, bay or bay laurel, ivy, box, fir and yew. This custom was common in England at least as far back as the 15th century, for according to antiquarian John Stow, “Against the feast of Christmas every mans house, as also their parish churches were decked with holme, Ivie, Bayes, and whatsoever the season of the yeare afforded to be greene: The Conduits and Standards in the streets were likewise garnished.” Even in the 18th century there was still a custom of “adorning of Windows with Bay and Laurel. It is but seldom observed in the North, but in Southern-Parts, it is very Common, particularly at our Universities, where it is Customary to adorn not only the Common Windows of the Town, and of the Colleges, but also to bedeck the Chapels of the Colleges, with branches of Laurel.” Laurel was considered an emblem of peace, joy and victory.

The Christmas holly was considered a male symbol bringing fortune and fertility to the household, while ivy, because of its clinging habit was considered to be a feminine symbol. Sterile holly was widely believed to bring ill-luck to the farmer and his stock, and in a poor berry year it was thought wise to put a sprig of ivy (perhaps with the berries reddened with ‘raddle’ left over from sheep-marking) in the Christmas decorations to avoid misfortune.

The importance of Christmas decorations in England is shown by the strict rules regarding their length of stay and the care taken in their disposal when they were removed from the house. In parts of Shropshire it was customary to leave the holly and ivy up until Candlemas, while the mistletoe bough was preserved until the time came for a new one next year. In west Shropshire however, mistletoe was traditionally connected with the New Year rather than Christmas, for it was believed that the bough should not be put up until New Year’s Eve. In Yorkshire and Lincolnshire it was considered bad luck to keep the Christmas evergreen in the house after Twelfth Night, but even when taken down they had to be thrown away not burnt or this might bring ill fortune.

In Leicestershire and Rutland it was considered bad luck to keep evergreen decorations up for longer than six weeks after Christmas that is until around Candlemas. In Somerset, no holly or mistletoe had to be hung up before Christmas Eve, and all decorations had to be removed by Twelfth Night. Similarly in Oxfordshire it was believed that holly should not be brought into the house before Christmas Eve or left up after Twelfth Night, and this may well have applied to its use in church decorations as well. If this taboo was not observed it was believed that the devil would enter the house, while to burn green holly would cause a death in the family.

In Warwickshire, holly was not brought into the house until Christmas Eve, and afterwards it had to be burnt, on no account had it to be taken out again. It was considered bad luck if any remained in the house after Twelfth Night. Mistletoe on the other hand was kept all year to protect the house from fire. It was only removed when a fresh bunch was brought in the following Christmas. A piece of rosemary was sometimes included in the decorations with the holly as it was believed to keep ghosts away. In Derbyshire it was held as unlucky not to have mistletoe in the house at Christmas, and again it was retained as a decoration until all the other evergreens were removed, at either Twelfth Night or Candlemas Eve. In London it was customary to burn all Christmas evergreens on Twelfth Day morning. In Cheshire the evergreens had to be taken down on Old Christmas Day (i.e. Twelfth Night new style) and on no account burnt, but carefully thrown away. In Gloucestershire it was again considered bad luck to bring holly into the house before Christmas Eve, but then it was kept up until the 12th January (usually coinciding with Plough Monday) or Candlemas but never after that. It was usually burnt a little at a time on the house fire.

In Devon all Christmas evergreens except mistletoe were taken down on New Year’s Eve and burnt, but in east Cornwall, St. Distaff’s Day (7th January) was the day all Christmas greenery came down. St. Distaff’s Day was a humorous name for the day on which women resumed or made preparations to resume their spinning after the Christmas festivities. In parts of Staffordshire it was believed that the holly and ivy must not be thrown away, but carefully burnt at Candlemas; in other parts of the county it had never to be burnt and some had to be kept until the next year to preserve the house from lightning. Mistletoe was also kept all year for this purpose. In many Worcestershire farm houses, the mistletoe, which was hung up in the kitchen, was allowed to remain until the next Christmas Eve, when it was burnt and replaced with fresh.

From the evidence available, analysis shows a tendency for the counties in the central Midlands to remove their Christmas evergreens at Candlemas, while in the northern and southern counties it appears to have been Twelfth Night. In all areas no evergreens were brought in earlier than Christmas Eve. 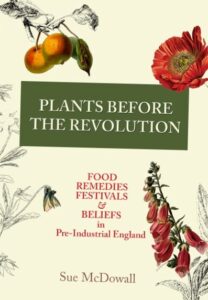 Win a  copy of Plants Before the Revolution by Sue McDowall

The wonderful Sue McDowall has offered a copy of her excellent book for one lucky newsletter subscriber this month!

Plants Before the Revolution explores the extensive use of plants in daily life and work, in seasonal customs and ceremonies, in food, popular beliefs and the practice of folk medicine and magic.
The part that plants and flowers played in the life of pre-industrial England should not be underestimated for they were necessary to a degree we can now hardly comprehend.

Plants Before the Revolution is the first in a series of occasional publications tracing the subtle but significant part plants and flowers have played in English society.

*Sign up for the #FolkloreThursday newsletter to enter our competitions this month (valid December 2019; UK & ROI only). For an extra chance to receive copies of the latest books and folklore goodies, become a #FolkloreThursday Patron supporter!

Sue McDowall is a former committee member of The Folklore Society. She has written several articles and papers on various aspects of plant lore and has recently published her first book, Plants before the Revolution: Food, Remedies, Festivals & Beliefs in Pre-Industrial England, now available from her website.