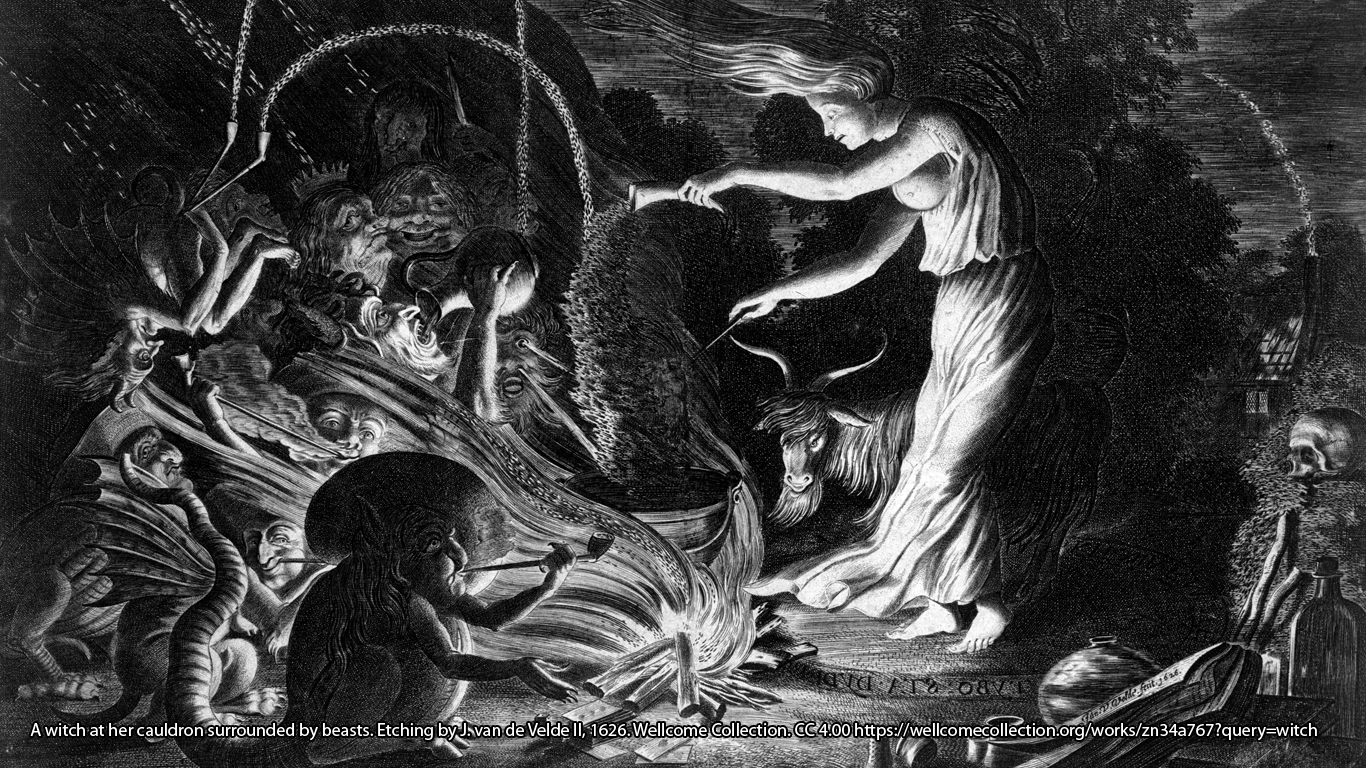 The European witch-hunts that cost between 40-50,000 lives in the later medieval/early modern period have stimulated such interest that it is cliché to lament the avalanche of published work that as a witchcraft researcher one has to plough through. This was not a complaint voiced often by those researching witchcraft in Ireland; a country often left out of major surveys of the witch-hunts. As a result, those interested in the Irish context had to turn to nineteenth-century antiquarian and folkloric accounts, ‘popular’ histories of individual trials, or a handful of academic articles and books.

Having previously written on witchcraft in England, I decided to tread where Angels feared and embark on a major re-evaluation of Irish witchcraft and popular magic. It would, I mused, make it easier for me to teach students about witchcraft in Ireland in the future, and help to fill an obvious gap in the historiography of witchcraft in the peripheral areas of Europe. The project that resulted from this (probably over) ambitious statement of intent has, to date, produced a variety of publications and outputs, and it is the conclusions reached in these that I want to reflect upon in this article.

To cover as much ground as possible, without losing sight of social, religious and cultural nuance and change over time, I concentrated on Ireland’s three main religious denominations, Roman Catholic, Presbyterian, and Church of Ireland, from the medieval to the modern era. My main focus however was the period 1586 to 1821, when many magical rituals and acts, including witchcraft, were illegal in Ireland under secular, statutory law. Setting research parameters is one thing, fulfilling them is quite another, and to do this sufficiently I cast my net wide in terms of primary source capture in order to compensate for the wide-scale destruction of Irish official records in fires in the early eighteenth and twentieth centuries. I would go on to use objects of material culture relating to protective and counter magic, such as witch-stones and witch bottles, to the written record: from memoirs, biographies, local histories, newspapers, and pamphlets accounts, to legal and church records. I also consulted early and later medieval Irish literary, ecclesiastical and legal sources, along with eighteenth and nineteenth-century public discourse, folklore and surviving court records.

So what did I find out about Irish witchcraft from these disparate sources? It is well known that Ireland largely avoided the ravages of European witch-hunting, having hosted only a handful of trials in the later seventeenth and early eighteenth centuries. I explained the lack of witch-hunting in a number of ways. First of all, I suggested that belief in malefic, demonic witchcraft, which became increasingly widespread in Europe from the late medieval period onward and was thought to pose an immediate and specific threat to person, property and livestock, did not penetrate the culture of the vast majority of the population, the Irish-speaking, Catholic, Gaelic-Irish. In any case, the Gaelic-Irish were well-catered for in terms of explanatory mechanisms for uncanny misfortune: fairies were blamed for various afflictions and illness in humans; while attacks on agricultural produce and livestock were laid at the door of butter-stealing, female witches.

Butter-witches stole milk in the form of a hare, or transferred the goodness or profit from neighbours’ butter to their own using sympathetic magic. The butter-witch was distinctive in Gaelic-Irish culture, from at least the later medieval period onward, forming part of a larger corpus of magical beliefs focused on women who used magic to adversely affect fertility, or destroy or engender relationships. In the early modern period, butter-witches were easily repelled using protective or counter magic and thought to be active only at certain times of the ritual year, primarily May Eve and May Day. Possibly due to a lack of pamphlet accounts and an indigenous body of demonological writing, the Irish butter-witch was never incorporated into a Satanic construct of dangerous, malefic witchcraft prominent in other parts of the British Isles and continental Europe. The perceived threat of Irish butter witches was further lessened by the fact that butter and milk were not as important to the domestic, local and national economy as they would become in later centuries, and thus their loss at the hands of nefarious magic was not as keenly felt. In short, for most people living in Ireland witches were of limited threat to life and limb and thus there was little need for the vast majority of the Irish population to have them prosecuted in secular court.

Although Ronald Hutton warns against making a simplistic association between belief in butter-stealing witchcraft and low witch prosecution rates, this benign butter-witch figure, combined with the use of alternative explanatory mechanisms for misfortune such as fairy attack and the evil-eye (magical power located in the eyes), can be found in other Celtic regions of the British Isles where witch-hunting was relatively light, namely the Isle of Man and the Highlands and Islands of Scotland. Furthermore, when in seventeenth and early eighteenth-century Poland and Wales, older butter-witch beliefs became informed by demonological conceptions of the witch as an agent of the devil who attended Sabbats, killed and harmed humans, and engaged in a range of immoral demonic practices and debaucheries, their perceived threat level increased along with numbers of accusations and prosecutions for witchcraft.

If the mass of the Irish Catholic population believed in fairies and butter-witches, the Protestant settler population saw witches in demonic terms, as a serious threat to produce, livestock and human life. As a result, from the mid-seventeenth century onwards, when they arrived in greater ever numbers from Scotland and settled mainly in Ulster, Irish Protestants laid formal accusations before religious and legal authorities. In common with England and elsewhere, these initial accusations were rooted in a variety of interpersonal, political and religious conflicts. Demonic possession also loomed large in seventeenth-century Protestant witchcraft accusation. Irish possession cases like their British and Colonial American counterparts were rooted in inter-generational tensions and rebellion against behavioural constraints imposed in strict clerical households. Furthermore, in Ireland, where distinctive gender roles were particularly strong, women and (to a far lesser extent) men who did not meet the behavioural norms of their sex, or who bore a physical resemblance to the cultural stereotype of a wizened, witch, or had a reputation for witchcraft, were more likely to be accused. Most of these accusations however did not end in prosecution and conviction at the hands of learned legal men who presided over the main county criminal courts, the Assize judges. This was the result of luck, informal arbitration, and the pre-trial interventions of magical practitioners and a judiciary increasingly sceptical about their ability to legally prove the crime of witchcraft.

Importantly, in Ulster, witchcraft cases were also arbitrated by Presbyterian Church Courts (presbyteries and sessions) which managed and policed the moral and religious lives of their communities. In doing so, they followed a precedent set by ministers and elders in the late seventeenth-century Church of Scotland, who were by that time unwilling to act as local witch-finders in the manner of their predecessors. Sceptical about their ability to establish guilt on the evidences of witchcraft brought before them, but not necessarily harbouring any real doubt about the existence of witches, Irish Presbyterian Church courts sided with the accused and censured the accuser for their slanderous witchcraft accusations. By providing closure when the secular courts were refusing to do so, Church arbitration may have prevented suspected witches becoming the target of mob violence and communal ‘justice’. It also made unfounded allegations a less attractive proposition to would-be accusers. However, I have identified one witch-lynching in Antrim town in 1698, to which Ireland’s only published witchcraft pamphlet is dedicated, where the Presbyterian neighbours of a bewitched young girl murdered an old women by strangling and burning her after the manner of their native Land, Scotland.

On occasion, however, these checks and balances failed and formal witchcraft accusations proceeded to trial: in 1659, Carrickfergus; in 1661, Youghal, Cork; and in 1711, Islandmagee. Trials were most likely to occur if witchcraft allegations were made by credible witnesses against believable suspects, and in periods of heightened religious tension, or increased concern over witchcraft and demonic possession. The trials at Islandmagee in 1711 were a case in point where eighteen year-old, educated, Presbyterian Mary Dunbar had 8 women and 1 man convicted of demonically possessing her by means of witchcraft.

In both Catholic and Protestant Ireland, popular witchcraft belief continued into the modern period, with the butter-stealing witch figure predominating in the culture of the former but also spreading to the latter, along with the fear of fairy changelings and fairy attack. Conversely, Gaelic-Irish witchcraft was influenced by Protestant belief, resulting in its witch figure becoming more threatening, on occasion harming not just livestock but also humans. By the later eighteenth-century, even more forcibly than they did in former times, reforming Catholic clerical elites condemned many popular folk beliefs considered superstitious. However, malefic, demonic witchcraft beliefs retained a degree of orthodoxy alongside Church-sanctioned manifestations of the miraculous. In the early eighteenth century, in a cultural context of widespread educated belief in the moral, magical universe, limited witchcraft scepticism appeared in Protestant public discourse; voiced by a small number of enlightened Whigs. It was only after 1750 that it became acceptable to condemn witchcraft (along with notions of an interventionist Satan) as irrational and vulgar. Continuing popular belief in Ireland was passed over in eighteenth-century public discourse, as it clashed with the Irish Protestant Ascendancy’s view of itself as enlightened, rational and polite; far removed from the enthusiastic, irrational beliefs that drove early modern witch-hunting. More importantly, from the early nineteenth century onwards, witchcraft cases were occasionally brought before judiciaries. The establishment of regional and metropolitan police forces and police courts, along with the extension of petty sessions, made it easier to make accusations of this nature. These witchcraft cases were either dismissed or ignored altogether by the Irish legal system. The fact that Irish newspapers now used them to entertain readers with tales of the credulous lower orders, lends more weight to the contention that by Repeal of the Irish Witchcraft Act in the early nineteenth century witchcraft belief had been completely marginalised within educated, Protestant culture.

My research is by no means definitive but it has broken the hard ground for those that follow, challenging the once prevailing notion that witchcraft and popular magic were not a significant part of Irish Protestant and Catholic culture in Ireland. There is still much research to be done on the Irish supernatural; a task in which (among others) myself and former and current PhD students, Dr John Fulton and Jodie Shevlin, are currently engaged.

Dr Andrew Sneddon is lecturer in history at Ulster University and president of the Ulster Society for Irish Historical Studies. He has published widely on the political, religious, medical and social history of Britain and Ireland. His most recent research explores Irish witchcraft and magical belief in a comparative framework from the medieval to the modern period. His third monograph, Witchcraft and Magic in Ireland, was published in 2015 by Palgrave. Follow Andrew on Twitter here.