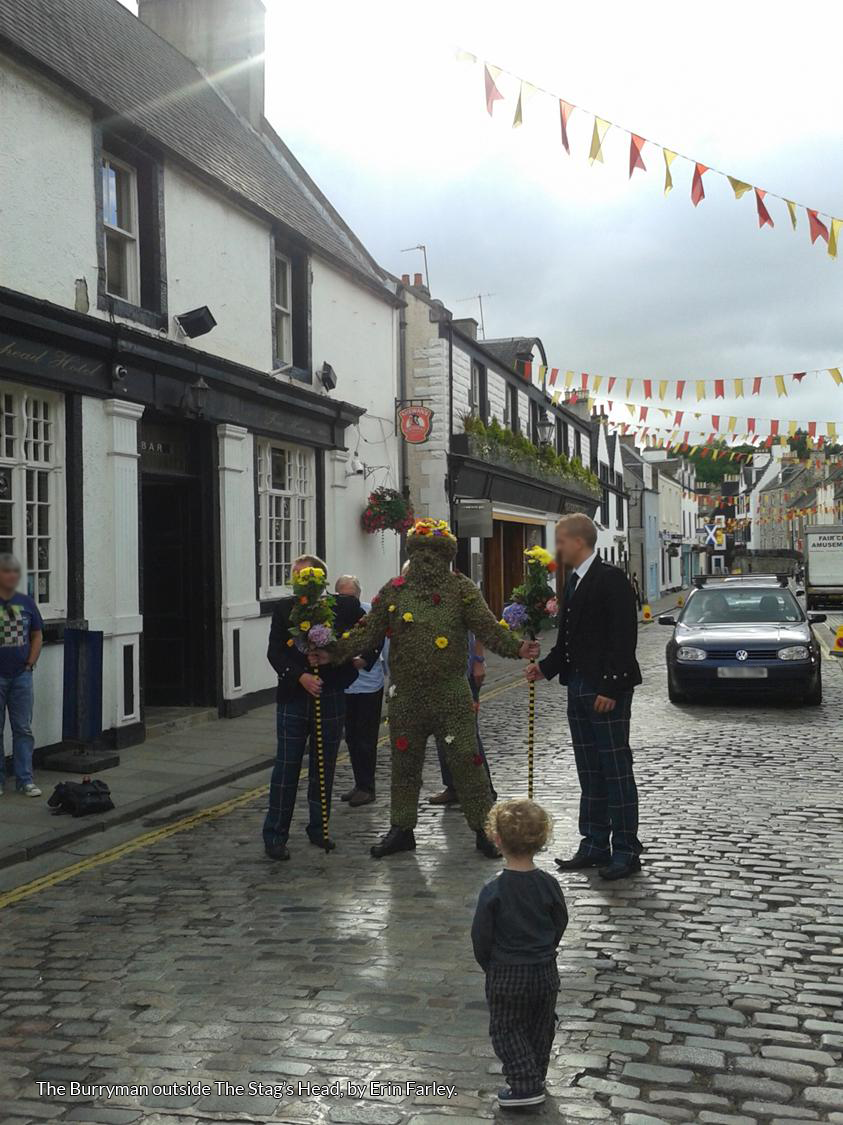 As a mid-August morning brings pale grey light to the old seaside town high street of South Queensferry, an unusual bustle centres around the Stag’s Head hotel. Like everything else on the street, it’s clearly closed, but people keep ducking into a black door left ajar, carrying boxes, bags, and flowers. Lots of flowers. This is where the Burryman’s Day begins, every second Friday of August. Inside and upstairs, the hotel pub’s dancefloor is barely visible under the spread of green – little spiky, sticky, round burrs, which have been collected by the Burryman’s team the previous week, pre-formed into square sheets and stored in pizza boxes. Andrew, the current Burryman, will be encased in these burrs – his hands the only human skin to be seen – then decorated with flowers. He will walk the streets of the Ferry all day, accompanied by kids ringing bells, and his two helpers, who hold his arms up, pausing at community centres, pubs, shops, residential streets. He is given whisky at many of his stopping points. At the end of the day, he will return to the Stag’s Head, and be cut from his skin of burrs, exhausted, scratched to bits, sweaty and triumphant.

No one knows how long this has gone on. A visitor to Queensferry in the 17th century mentioned the tradition, and it was mysterious even then. It seems to have to do with herring fishing. Aberdeen, Fraserburgh and Buckie, fishing towns in the North East of Scotland, all had Burrymen previously – all stopped during the 19th century. Buckie’s used to hang herrings from his hat, which must have smelt lovely. In Fraserburgh, they declared they would stop doing it after they saw no improvement in their catch. In Aberdeen, it was banned after one poor Burryman, chased from the town and thrashed as was traditional there, was killed.

But it still works in Queensferry. Some folk say he brings good luck to the town, but most say he is a scapegoat – the bad luck sticks to his burrs. This is why you give money or whisky, paying him to take your sin and your bad karma onto his own head. When he is chased out – or ceremonially de-burred – this collective misery is removed from the town. A former Burryman, John, once said to me, to know what it really does, we’d have to not have it one year and see what happens. And we don’t want to risk that.

The Burryman is unusual, contradictory, in many ways: often, it’s female figures who are seen bedecked in flowers in seasonal traditions. And, furthermore: why ask a green man for help with the fishing? I like to think of it as a ‘surf and turf’ tradition. It would be near impossible to have a Burryman at any other time of year, because of the life cycle of the plants, but late August is also a key season for herring fishing. I often wonder if the tradition evolved from farming communities moving to the coast, taking a harvest tradition and adapting it to work for their new needs, finding something special in the burrs as they did so. This is not the sort of thing which can be proved, though, and it’s clear the Burryman in Queensferry continues to have a real, necessary function long after the herring fishing has left the town.

Andrew wears long black leggings and t-shirt over his ordinary clothes and heavy black boots. The dressing team – including his partner Lynne, and various friends and family of the Burryman – patch burrs onto him from ankles upwards. Doc Rowe, a folklorist who has served as dresser and documenter to several Burrymen, has brought a patch of burrs up from Yorkshire. It looks like they are fashioning a man out of clay, of raw matter. This is pure creation. You can feel excitement building in the air. People are chatting, joking, planning for the day ahead. Photographers and press have found their way in, clustering on the edges for photos.

The Burryman is like nothing you’ve ever seen before, a shuffling, alien creature disrupting the boundaries between man and nature. But to long-term residents of Queensferry he is that and much more; he marks not just the passing of time but the boundaries of what the Ferry is as a community. The route he walks evolves over time to take in what is important – and leave out places where he isn’t appreciated – but the Burryman makes sure to be no more than five minutes away from everyone resident in Queensferry at some point in the walk. The day is a time to remember, too, in the quiet moments when the Burryman pauses outside the houses of supporters who have recently died.

As you might expect, the Burryman evokes extreme reactions in young children – they love him or fear him, or love to fear him. But since cameras have become everyday items, it’s become an important part of many Ferry families’ year to get a snapshot of their child with the Burryman. You will see many parents coaxing reluctant toddlers into the arms of this green monster – though it must be said, he is a very friendly and understanding monster at all times. He’s not here to be scary, it just sort of happens. But getting a photo with the Burryman is a new thread to an old tradition, one which has evolved as naturally as any of the pre-technology aspects of the day. The Burry team have embraced social media, too – posting updates to help people find him, uploading pictures to the Facebook page which show not just the curated, dramatic shots which make it into the press but the tired-yet-happy, bedraggled crew sheltering from the rain under a balcony in a beer garden.

As Andrew gradually becomes the Burryman, the last thing to be disguised is his face. A black balaclava is the canvas for burrs, with gaps you can hardly see his eyes through. Finally, he is crowned with a black bowler hat covered in flowers. Once the transformation is complete, he must move outside before long – the weight of the costume, imbued as it is with magic, expectation and thick vegetation, is far too hot for indoors wear. He shuffles out into the morning, where a crowd awaits on the cobblestones. The clanging of the handbell calls the day into being, and the street echoes with the sound of his young followers chanting – HIP HIP HOORAY, IT’S THE BURRYMAN’S DAY!

Do take a look at this film about from @GreatBigPress on the tradition:

And here is @johnjnicol‘s angle on being the Burryman until recently:

Erin Farley is a PhD student looking at traditional song and working class poetry based in Dundee, Scotland. She is also a storyteller who loves ghost stories and supernatural landscape legends, and is on the organising committee of the Orkney Storytelling Festival. Most of her work is underpinned by a fascination with how people use tradition and creativity to reflect and shape the landscapes in which we live. She will not be available to attend meetings, conferences or other commitments on the second Friday in August. Ever. Erin tweets as @aliasmacalias and her website can be found here.