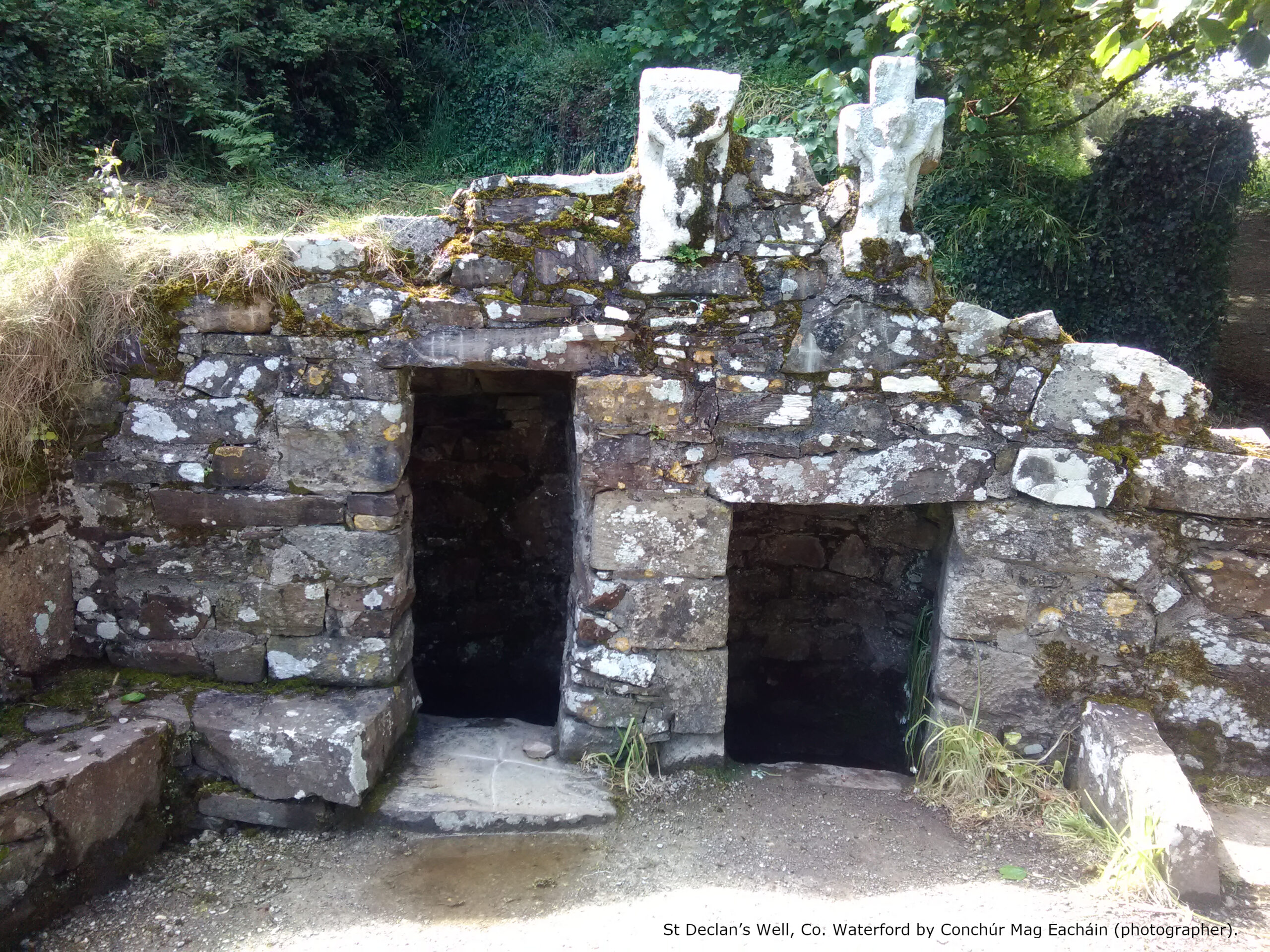 Ireland has at least 3,000 wells that are, or were at least up until recently, looked upon as holy or blessed.[1] These wells may be dedicated to a local saint, a non-Irish saint (for example, St John the Baptist, St Michael etc), and quite a few are dedicated to Mary. Many wells are still frequented for spiritual and healing needs and may be visited at any time of the year, on a particular day such as a holy day or feast day of a saint, or at important times in the calendar that sometimes correspond to quarter days, such as 1st February (Imbolc/St Brigid’s Day, beginning of spring), 1st May (Bealtaine, beginning of summer), last Sunday in July/first Sunday in August (Lúnasa, beginning of the harvest). Some wells are not named after a saint and are known for the cure to be found in their waters, for example, Tobar na Súl/Eye Well, Tobar na bhFaithní/Wart Well, or even Jaundy or Jaundice Well in Co. Monaghan where people bathed at sunrise and sunset to get relief from that illness.[2] The custom of visiting wells for their healing properties is long established in Ireland and is mentioned in a text composed nearly 1000 years ago that describes a battle between the Tuath Dé Danann and the Fomorians, two supernatural races. Goibhniu, the legendary smith of the Tuath Dé Danann, was hit by a spear and went to a special well and after bathing in it he came out cured.[3]

In the late 1930s, school children in Ireland were enlisted to collect folklore from their family and neighbours. A guidebook was prepared by the Irish Folklore Commission which outlined 55 essay topics, one of them being ‘Our Holy Wells’.[4] Children were asked to find out if there was a well in their area, if it was connected with a particular saint, the origin of the well and any cures and stories connected with it. These stories form part of the Schools’ Collection and are available at www.duchas.ie. A small selection of the stories and traditions collected will be outlined below along with photographs taken in more recent times.

The origins of many wells, according to the folklore, are sometimes associated with a saint seeking to baptize the pagan locals, or a need for water to quench their thirst and the saint roaming the land. Lacking water the saint strikes the ground with his crozier[5], or makes the sign of the cross over the ground[6], and water gushes out forming the well. In folklore St Patrick is credited with having driven the snakes out of Ireland, and the formation of St Patrick’s Well in Co. Limerick is said to have sprung up during one skirmish:

It is said that there was a serpent in Clouncagh killing all the animals, and St Patrick knelt on a stone in the field at the north side of the parish priest’s house, and threw his prayer-book and killed the serpent, and where the prayer-book fell the well sprung up. It is also said that the print of St Patrick’s knee is to be seen on the stone where he knelt. The people drink the water, and rub it to the affected parts.[7]

A lesser known serpent-slayer is St Caireall of Cluain Caoin Cairill (‘the pleasant meadow of Caireall’). A serpent came out of the bog and the saint took the head off it with a spear – where the head fell a well sprang up and the locals visit it still on the saint’s feast-day on the 13th of June. The water of the well is said to cure headache and toothache and protects the house from lightning.[8] A few wells associated with female saints have more grisly origins. In Co. Cork is Crannahulla, a holy tree associated with Cránaid, a saint renowned for her beauty. She was to be married to a prince but took the extreme action to disfigure herself:

She determined there and then to destroy her beauty and catching hold of one of her eyes she plucked it out and cast it on fence. Immediately a big strong ash tree sprang up in the spot where her eye had fallen. The tree is today in the same place. What is locally regarded as Cranath’s eye is plainly to be seen on the butt of the tree … In a fork of the tree is a well which never runs dry. At one time ‘rounds for sore eyes’ used to be paid here.[9]

Similar stories are told of St Brigid[10] and St Deirbhile[11] and have parallels with folklore associated with St Lucy of Syracuse.

Not all wells are typical wells in the sense of a spring – some are depressions in rocks and others can be in the trunk of a tree or under it, as is the case of Crannahulla. Depressions in rocks, or bullauns, are sometimes associated with a saint who is said to have formed the marks with their knees whilst praying on the rock. In Killarney, Co. Kerry, this is the story of Cloch Mochuda – ‘Mochuda’s stone’ – formed after St Mochuda followed a robin when out on a walk and fell asleep for a long period of time:

He heard a robin singing beautifully and he walked after it listening to its song. After a while he got tired and he knelt down to pray … The print of Brother Cudda’s knees are in the stone where he knelt. Also the print of his chin where it rested. People go to do rounds there every year. The rounds consist of visiting the well three mornings and it is said if you meet the robin the three mornings you would be cured. Before leaving the well it is customary to leave something after you.[12]

Prayers of course are usually a feature of a turas, ‘rounds’ or pilgrimage, but it is typically also important ‘to leave something after you’, some sort of votive offering. A common offering at many wells is a rag or piece of cloth that is attached to a ‘rag tree’ – usually also considered holy  – growing over or near the well. Other offerings include pins, medals, beads, holy pictures, statues and so forth. The common view is that the offering represents the sickness the pilgrim wants cured. At Tober Lasair, Co. Roscommon, for example:

The place around the well, but particularly the ash tree growing over the well is strewn with pieces of ribbon, rags, medals, crosses and such things. These are left by people who wish to obtain cures. In leaving these things they are supposed to leave the disease as well.[13]

Even after all this a cure or petition granted is not guaranteed. Many wells are said to contain a blessed fish or eel that should not be interfered with. This fish might only appear to certain people or appear at a certain time, and its appearance is usually taken as a good omen that the person will be cured. St Keeran’s Well in Co. Meath is one of many wells visited on the first Sunday in August:

On the first Saturday night in August people go to Ciaran’s Well to be cured of diseases. There is said to be a fish in this well and he appears at twelve o’clock on the said Saturday night and whoever sees the fish first will be cured of any disease.[14]

Holy wells are sacred places and disrespecting any part of the site will have dire consequences for the offender. Stories abound of women washing clothes in the sacred waters causing the well to dry up or moving to a new location.[15] In other stories the landowner on which the well stands, annoyed at people entering onto his land, closes the well only to have spring up again in his house flooding it. He sends his men to open it again and the water recedes.[16] Another fairly common story tells of a man bringing his blind horse to a well to get it cured, sometimes mockingly, and ultimately he suffers. The following is told of St Dominick’s Well, Co. Limerick:

A teacher at Clonbullogue School, Co. Offaly, adds the following postscript to an essay about the local holy well regarding the desecration of wells: ‘When people round Clonbullogue want to convey that disastrous or disagreeable consequences will follow from a certain course of action they say: “You might as well piss in a holy well as etc etc”’.[18]

More stories regarding holy wells, as well as photographs, can be viewed on www.duchas.ie.

[4] The guidebook, Irish Folklore and Tradition, is available here.