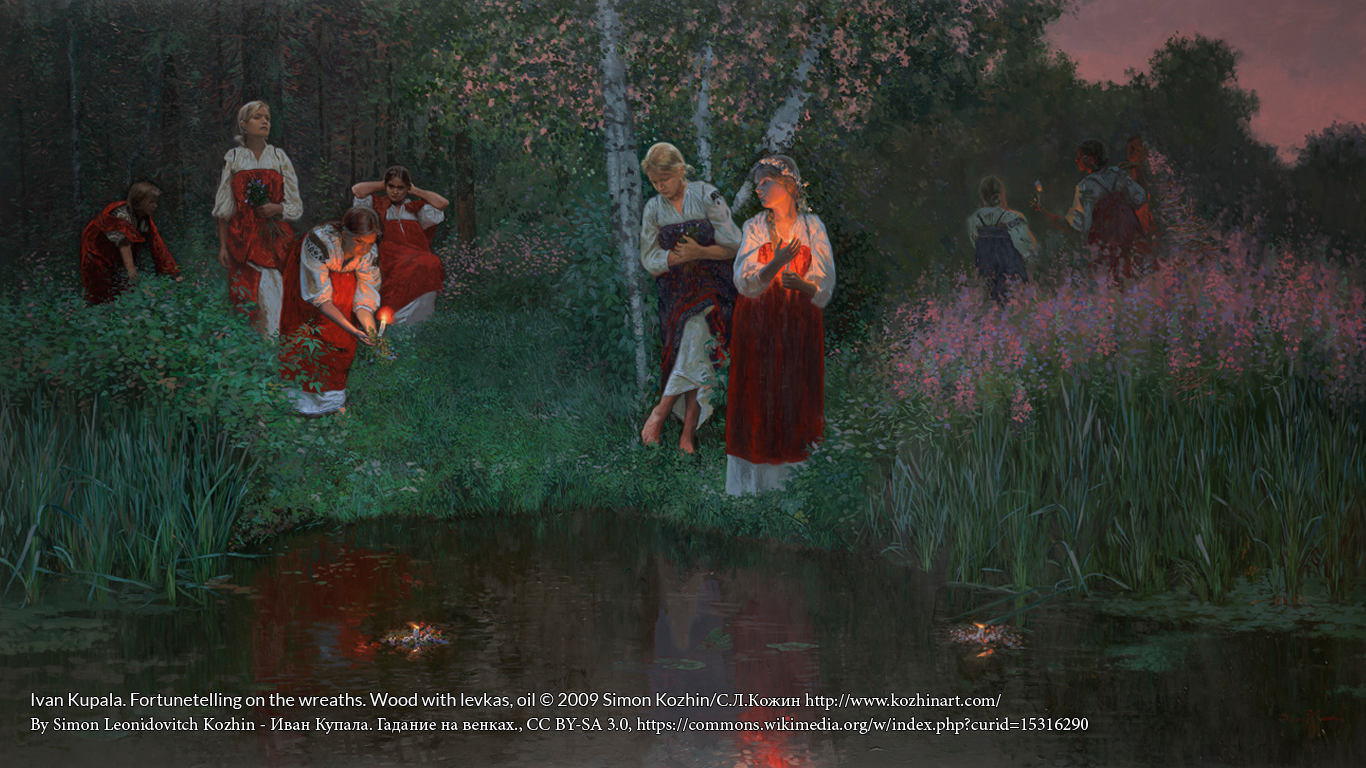 The night of 23rd of June is an excellent time for expanding your botanical knowledge, since in the past bunches and garlands plaited that night had to be made of blue and yellow flowers and herbs: common cow-wheat, fleabane, pansy, globeflower, wolf’s bane, gentiana to name but a few.

Plants with yellow or white flowers in the shape of a radiating circle were also sought in north and south Slavic lands, for example mums (used in fortune telling and in Slovenia and Ruthenia called St. John’s herb, St. John’s head in Poland), chamomile, mountain arnica or pot marigold. In the south of Poland at Midsummer’s Eve people would put symbolic representations of their family members (made from fleabane) into a pot:  the person whose flower withered first was believed to be due to die soon.  Greater burdock or nettle was put on roofs and in windows, where they protected the house from witches, evil and wind.  Fern was another important plant that night and at midnight its magic flower was sought by young people – it was an excuse for dating and sexual initiation. Legend said that only a righteous person could find the flower, and thus become wealthy, wise and happy. Even in the 1960s this traditional search would be carried out near Łowicz (central Poland) and in the early 21st century similar activities were registered near Hrubieszów (southeast Poland).

Midsummer’s Eve garlands protected from spells and curses.  In Poland, Great Russia, Ukraine, Slovakia and Czech the garlands, with candles attached in the middle,  would be set on water, their path on the surface foretelling the owner’s future.  Specifics depended on the region:  in Poland along the Lower Bug river and Lower Narew river people used wooden circles with a candle and small garlands of various flowers: if the thing spun, one should expect their wedding, if they floated straight, a wedding should not be expected. On the other hand in Ukraine a garland spinning in place or sinking meant death, and garlands entangled at a riverbank meant a wedding in the village. In places without any bodies of water, such as East Germany, the garlands would be thrown over one’s head onto trees and their configuration on the branches foretold happy or unhappy future.

The tradition of garlands is probably an extension of the tradition of throwing twigs such as birch and rosemary into flowing water, where they were used for telling the future.  Later, people began to plait the twigs into garlands. Water often featured in Midsummer Eve customs and beliefs. In Poland many people believed that after winter it was unsafe to enter rivers before “St. John’s”, and  maidens wearing garlands on their heads and sagebrush around their waists danced around bonfires. These processional dances were common in many parts of Europe and were thought to ensure good harvest and health. A 13th century source talks about women dancing on Ślęża Mountain on Midsummer’s Eve night.

Traditions related to Midsummer’s Eve garlands are strongly represented in Warsaw, the capital of Poland. A 19th century chronicler wrote:

… The Garlands on the Vistula holiday is well known in Warsaw. On that day, in the evening, girls throw garlands from bridges, previously setting a candle alight on them and from the banks tell their future. Fishermen chase the garlands on boats and the girl whose garland is caught has to buy it back. Depending whether a garland sinks or floats, is caught or not, if two come together on the surface or the current separates them or sinks them, they tell whether their future is going to be happy or not…

The so-called “Garlands in Warsaw” are still celebrated, accompanied by light shows, concerts and events.

Valerian Krasinski,  Sketch of the religious History of the Slavonic Nations: Being a second edition of his lectures of this subject, revised and enlarged; Published by Johnstone and Hunter, 1851.

Graduate of the Institute of Ethnology and Cultural Anthropology in Warsaw, ethnographer, curator of the folklore collection, editor of "the New Ethnography". Works in The State Ethnographic Museum in Warsaw in the Department of Polish and European Ethnography; conducts field studies in Poland and abroad, one of the creators of the Museum for Children. She is also responsible for the museum’s social media and cooperation with: Wikipedia , Google Cultural Institute.