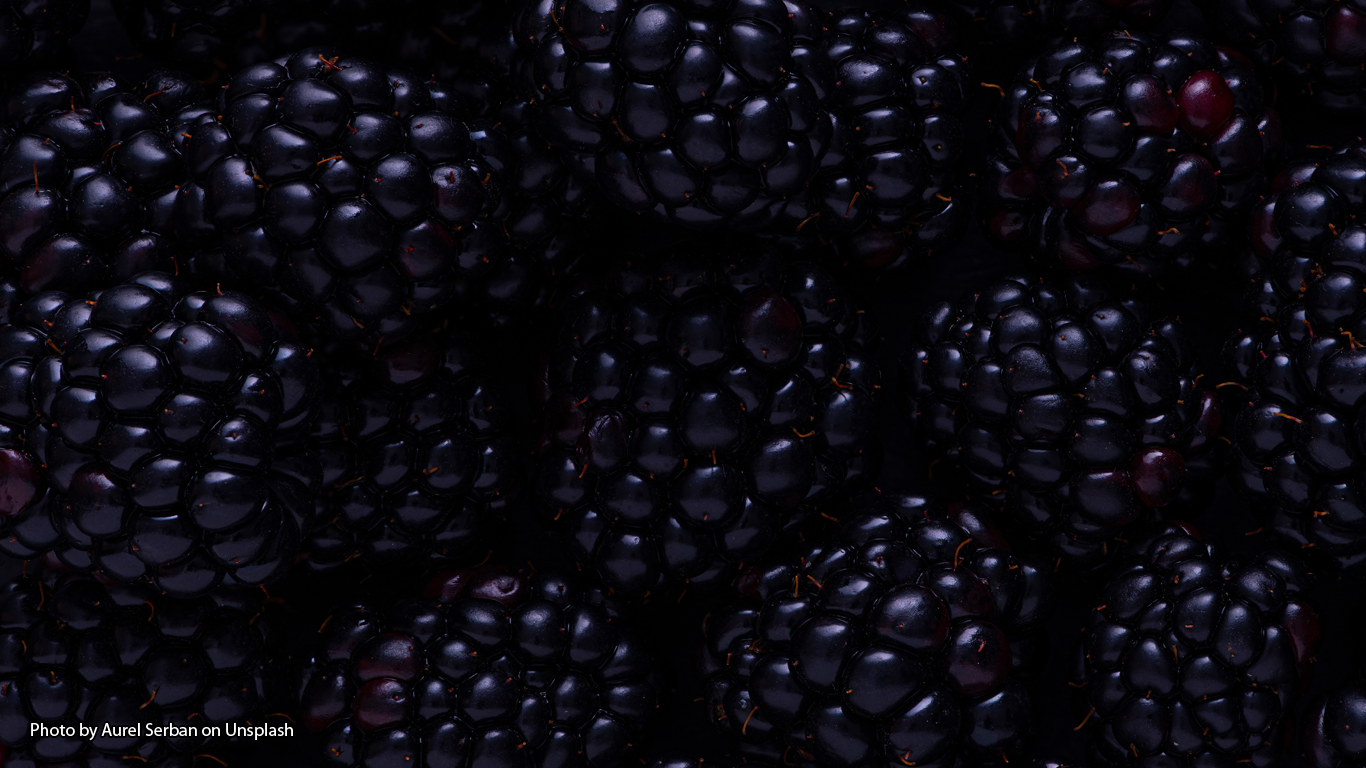 Sunday was Michaelmas, the Feast of St. Michael and All Angels which falls on 29th September. But you may know that already. In fact you might have just taken a short cut through some overgrown land, or gone for a walk down a hedge-lined lane, and thought to yourself, ‘My, those blackberries certainly look tempting, but I’m not silly enough to touch one. Not now’. For on Michaelmas Day the Devil takes possession of the blackberries and to eat one after that day would risk… well, something on the spectrum between a bad taste and instant death. Like so much folklore, the blackberry-and-Devil tradition takes different forms depending on who told it, and when, and where.

It’s a safe bet to give up blackberrying after Michaelmas, as that’s the date usually specified, although one recent contributor to Roy Vickery’s Garlands, Conkers and Mother-Die (2010) says ‘before the end of August’. On the other hand you might risk an extra week of picking, as there are traditions from Sussex and Hertfordshire which say the Devil is abroad on 10th October, and from Worcestershire and Norfolk where it’s 11th October. That’s a difference of eleven days (inclusive or exclusive) and if you know anything about the English folk calendar, this figure will ring a bell, because 10th October is Old Michaelmas Day.

If Sussex people in 1868 were talking about the Devil poisoning blackberries on Old Michaelmas Day, then that proves the tradition must go back before calendar reform in 1752, otherwise they would have had no reason to convert the date. And yes, the belief is mentioned earlier, by one C. Threlkeld who writes in 1727 that ‘after Michaelmas the D—l casts his club over them’, which, he explains carefully ‘is a Fable’. So it says in Synopsis Stirpium Hibernicarum, which I have to confess I haven’t read, but it’s quoted in Iona Opie and Moira Tatem’s classic Dictionary of Superstitions (1989). There are no other eighteenth-century examples, but then there weren’t many people in the eighteenth century who were interested in folklore, or in blackberries for that matter. I suppose everybody ate them, but you don’t find authors writing about what everybody does until the Romantic period.

By and large, it was in the southern counties of England that the Devil was said to be abroad on 10th/11th October; elsewhere people were happy to go on quoting 29th September. This is odd, because in Britain flowering and fruiting dates get later, not earlier, as you head north; but what is it, exactly that happens about this time of year to the blackberries? I can’t speak from personal experience, having religiously abstained from eating blackberries from October onwards, but sources like Richard Mabey’s Flora Britannica (1996) suggest that there are multiple factors at work. Firstly, there are lot of subspecies of bramble, and it may be that the later developers have a nastier taste. Also, all species have a regular fruiting pattern, beginning near the growing tip of the plant and moving gradually backwards, and the fruit further up the stem will have ripened when days are short, which makes it smaller and harder. Finally, there are the autumn frosts which make the fruit mushy, more likely to get fly-blown and breed moulds. I suspect it’s the frost that does the damage. Interestingly, Brockie in his Legends and Superstitions of Durham (1886) says ‘the arch-fiend is believed to ride along the hedges… and pollute everything that grows in them, except the sloes’ (my italics). Since sloes are only edible – just – when they’ve been touched by frost, you can see why they would be unaffected by the diabolical influence. And in Ireland, where the frosts come later, blackberries are said to be edible up until Samhain, 1st November.

So the belief that the Devil poisons blackberries corresponds to what really happens to Rubus fruticosus, the bramble, each autumn. And this makes it a useful belief to have, because it substitutes a powerful supernatural motive (I mustn’t pick blackberries after today, or I’ll be eating the Devil’s fruit) for a merely rational one (I mustn’t carry on picking blackberries after the frosts begin, because they might make me sick). That’s what you might call a functional theory of folklore. But as usual, when you examine individual cases the theory tends to come unstuck. Firstly, there were some people who extended the prohibition into a belief that the Devil owned blackberries all the time. Ella Leather, author of Folk-Lore of Herefordshire (1912), spoke to an old gardener near Ross who refused to touch the things: ‘the trail of the serpent is on them’. Apparently the whole neighbourhood rejected them as a source of food. And even where blackberries were legitimate up until Old Michaelmas Day, the superstition imposed an absolute barrier on what was really a gradual process. Charlotte Latham knew a farmer’s wife from Arundel whose request for the fruits one day late was turned down with horror by the charwoman: ‘If any person were to eat one on the eleventh they or someone belonging to them would die or fall into great trouble before the year was out. No, nothing should persuade me to let any child of mine go blackberrying on the 11th of October’ – quoted in Roy Vickery’s Dictionary of Plant Lore (1995).

Ideas about the Devil really belong to the world of belief and symbolism, not practical picking advice. Blackberries are, well, black, which is a hellish sort of colour to start with. And they grow in the wild. Nowadays there’s a cult of wild foraging, which will put you in touch with nature and your deeper self and all that sort of thing, but I don’t think that country people in the eighteenth and nineteenth centuries were so comfortable about wild nature and the things that grew there. There are a lot of stories which associate the Devil with picking hazelnuts, the next commonest wild crop after blackberries. And weeds, tasteless and toxic plants – the things that belong to nature, as opposed to the comforting culture of fields and gardens – were typically named as the Devil’s plants. By making blackberries taste horrible, the fiend was transferring them from the category of crops to that of weeds; he was making them his own.

Yes, but how exactly did he do it? In the earliest records there are hardly any two sources which agree on this. He puts his foot on them; he puts his paw on them; he steps on them; he passes his cloven hoof over them; he drags his tail over them; he waves or throws his club over them. This last method is the only one with eye-witness evidence: in southern Scotland a boy was stuffing himself with the forbidden fruit when he saw ‘that the club had come thundering over an old dyke and among the brambles just beside him, effectually putting an end to his feast’; so says William Henderson, Folk Lore of the Northern Counties (1866). I’m not sure if the Devil’s club is meant to be a kind of boomerang, which swings out over the bushes and then returns to his hand: or does he have to scramble over and pick it up? If so, the boy would have had good reasons for making himself scarce.

Sometimes we are just told that he has cursed the blackberries, or been at them, or that ‘the Devil peeps over the hedgerows and blasts them’ – Vickery’s Dictionary (1995) again. These versions might come from people who knew that the Devil did something, but couldn’t remember quite what. On the other hand, they suggest that for a long time the method didn’t seem to matter very much. The most popular explanation, though, was that he spat on the blackberries. Charlotte Latham was told this, so it goes back to 1866 at least, but it is much commoner in twentieth-century sources and today it is the standard explanation. If you google Devil + blackberry, that’s the version you’ll get.

There’s another variant, though, in which the Devil pisses on the blackberries. Now at first reading this makes good sense. After all, we know the end result is to make the blackberries taste horrid, and diabolical piss is presumably even nastier than diabolical spittle. However, ‘it all makes sense’ is a poor argument in folklore unless you can back it up with evidence, and unfortunately there are very few firsthand reports in which people said that it was the Devil’s piss that made them taste so bad.

Jacqueline Simpson, in the Dictionary of English Folklore which she co-authored with Steve Roud (2000), tackles this issue head on and suggests that pissing was the original version, referred to more politely as spitting on the blackberries, or even more politely as waving a leg over them, treading on them, and so on. Now it is a rash thing to disagree with Dr. Simpson, and I’m not sure that my case is (as it were) watertight, but I don’t think that ‘spitting’ and the other actions are just euphemisms for ‘pissing’. Some folklorists, it is true, were ladies of tender sensibilities who might have been fed a softened version of things, but some were not. John Sampson the linguist was no blushing violet; he sat for days on end taking down conversation of the Woods, the last Gypsy family in Britain to speak inflected Romani, and they didn’t mince their words when talking about bodily matters. And all they said was that the Devil blew on the blackberries.

I suspect that this was one amongst a great many variants, all expressing the idea of the Devil somehow taking ownership, and that spitting has gradually become the most popular version. Perhaps it will be replaced in turn by pissing: who knows? In the meantime, keep your fingers off those late fruits, and be ready to duck if a club comes whizzing over the hedge.

In addition to the sources above, dozens of references to original sources can be found in Steve Roud’s classic Guide to the Superstitions of Britain and Ireland (2003). There are some more in Donald Watts’ Dictionary of Plant Lore (2007). Online, there’s a survey of the belief here.

Jeremy Harte is a researcher into folklore and archaeology, with a particular interest in sacred space and tales of encounters with the supernatural. His books include Cuckoo Pounds and Singing Barrows, and The Green Man. He is curator of Bourne Hall Museum in Surrey, where he lives alone in an old house full of dust and shadows.