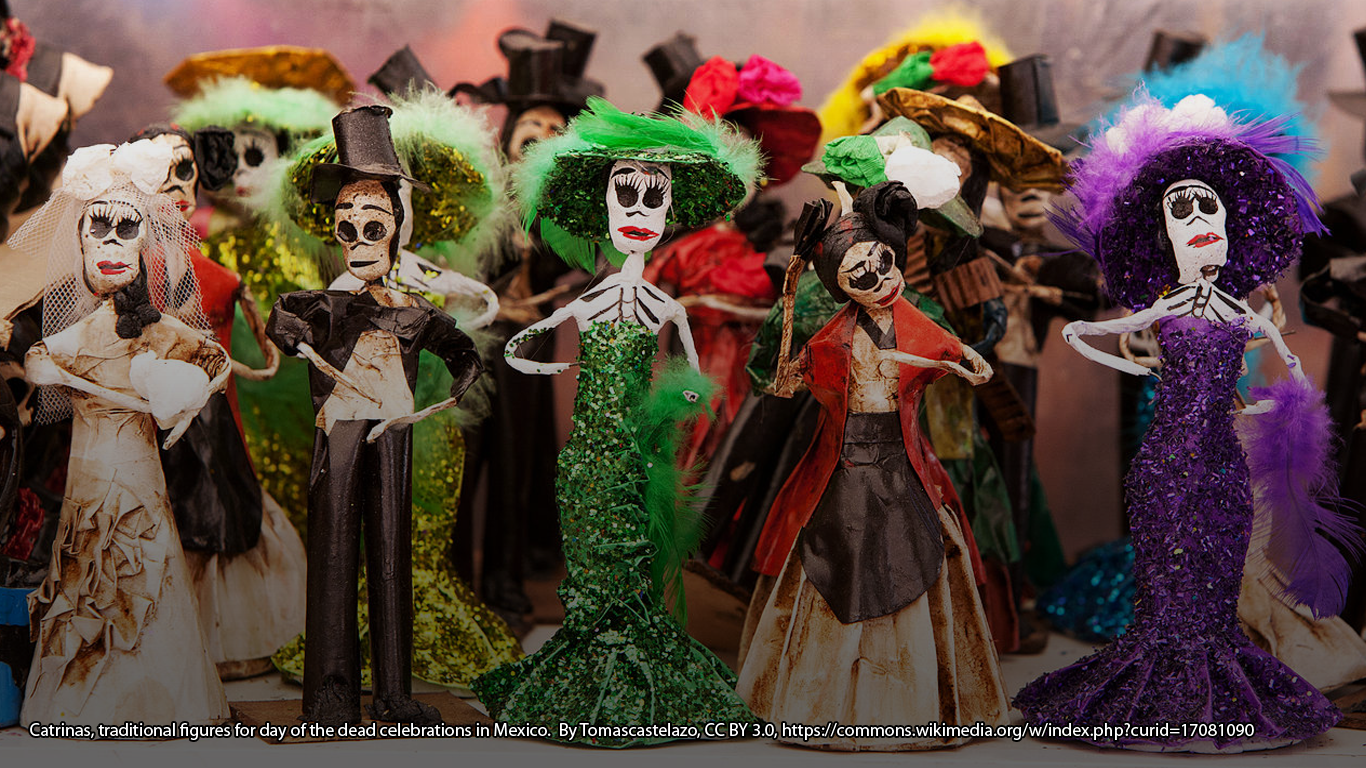 The season of death is fast approaching. October is here and soon comes Halloween with its cavalcade of ghosts and goblins together with the Catholic holy days of All Saints and All Souls, known in Latin America as Dia de los Muertos (Day of the Dead). Included in these fall festivals are two familiar faces whose skeletal images afford them special attention during the season, despite the fact that neither one is historically connected to these holidays – Santa Muerte (Saint Death) and Catrina Calavera (Skeleton Dame) engage not only millions of South and North Americans but also many Europeans in rituals that reconnect us with our own mortality.

With retail outlets across the U.S. featuring more and more Mexican-themed Dia de los Muertos and Catrina items in their Halloween merchandise, we’ll leave aside the trick or treating and pumpkin carving of our own childhood in the United States, and try to answer one of the two questions that invariably come up during our presentations on Day of the Dead and the Bony Lady (one of Santa Muerte’s main monikers). What is the relationship, if any, among Catrina Calavera, Santa Muerte, and Day of the Dead?

The first member of the Mexican death trinity has been in the limelight during the past decade or so, especially with her cameo appearance in the critically-acclaimed TV series, Breaking Bad. Santa Muerte is a Mexican folk saint who personifies death in the form a female skeleton. Whether as a votive candle, gold medallion, or statue, she is typically depicted as a Grim Reapress, wielding the same scythe and wearing a shroud similar to that of the Grim Reaper, her male forebear. Unlike canonized Catholics, folk saints are spirits of deceased Latin American women and men considered holy for their miracle working powers. What really distinguishes the Bony Lady, however, from other regional folk saints is that for most devotees she is the personification of death itself and not of a real woman that lived and died on Mexican soil.

In Mexico and Latin America in general, folk saints such as San La Muerte (the Argentine male cousin of Santa Muerte), Jesus Malverde, and Rey Pascual (the Guatemalan male cousin of the Bony Lady) have millions of devotees and are often sought out more than the Catholic saints, most of whom are Europeans who lived centuries ago. These homegrown Latin American saints are united to their devotees by nationality and often by both locality and social class. Explaining the appeal of the skeleton saint a Mexico City street vendor stated, “She understands us because she’s a badass (cabrona) like us.” In stark contrast, Mexicans would never refer to national matroness, the Virgin of Guadalupe, as a cabrona, which is also often uttered to mean “bitch.”

Most of the major shrines in the U.S. and Mexico celebrate annual feast days with the specific date varying. For example, Doña Queta’s historic shrine in the notorious Mexico City barrio of Tepito will commemorate its seventeenth anniversary on Halloween of this year. Here it must be pointed out that despite the misinformation on Wikipedia, there is no official feast day for the Bony Lady. However, if there is one in the future it will likely be November 2, Day of the Dead, as one of the most important recent devotional trends is that of devotees incorporating Saint Death into their Dia de los Muertos commemorations. This has become so popular that Catholic bishops and priests across Mexico and even some in the U.S. routinely remind parishioners in the weeks preceding Day of the Dead that Santa Muerte stands in opposition to Christian beliefs and as such should under no circumstances be part of the remembrance of deceased family members and friends.

Day of the Dead

In the U.S., the Catholic festival of All Hallowed Eve has taken on the darker image of Halloween, with haunted houses, horror movies, and the departed returning for trouble rather than tradition. In Latin America and Europe, where Catholic cultural influences have remained relatively strong, the first and second of November continue to hold their ancient ties to festivals associated with honoring, celebrating and continuing interaction with the dead.

In Mexico, before the Spanish conquest, the Aztecs dedicated most of the month of August to their goddess of death, Mictecacihuatl. While today’s celebrations are less extensive – Dia de los Muertos (Day of the Dead,) which falls on November 1 and 2, is one of the most anticipated holidays of the year. It’s a time to reconnect with deceased family members, ancestors, and friends in a convivial spirit of remembrance and celebration.

As part of the overarching suppression of indigenous religion, the Catholic Church exorcised Mictecacihuatl and moved the date to coincide with All Saints’ Day (November 1), which is also known in Mexico as Day of the Innocents for its association with Masses focusing on deceased infants and children, and All Souls Day (November 2), where the focus is on departed adults.

Visits to the cemetery to bring offerings to the dead, such as candles, flowers, and food, are common, along with offerings left at home altars. Private activities with family and friends often involve more festive celebrations including the striking sugar skulls, calaveras de azúcar, and pan de muerto (bread of the dead), which will be recognized by many readers outside of Mexico as familiar icons of the tradition. Adorned with the name of a deceased relative, the skulls are eaten as a reminder that death is not a bitter end, but rather a sweet continuation of the natural cycles of life.

Historically commemoration of Day of the Dead has been more common among working class Mexicans. However, the combined influence of the James Bond film, Spectre, and growing popularity in the U.S. has led many middle class Mexican urbanites to embrace traditions they used to ignore or even deride. In a surreal case of life imitating art, Mexico City held its first Day of the Dead parade last year, which strongly resembled the opening scenes of Spectre. From the home hearth to the world stage the imagery of Dia de los Muertos has become an able ambassador for Mexico’s cultural heritage around the globe!

Born around 1910, from the pen of the famed Mexican illustrator José Guadalupe Posada, Calavera Catrina is another skeleton that has become central to Mexico’s cultural identity. As a satirical cartoon created to mock the early 20th-century Mexican upper classes, Catrina bears a remarkable likeness to images of Carmen Romero Rubio, the second wife of Porfirio Diaz, whose turbulent presidency was one of the main targets of Posada’s mordant satire.

Posada’s popular illustrations were deeply embedded into the cultural context of the Mexican Revolution (1910-20), the first great popular revolt of the 20th century, which led to a new appreciation of the indigenous past. The symbolism of the skeleton, which in indigenous traditions throughout the Americas represents the continuation of life’s cyclical turn, proved to be a potent and resonant image for Mexican cultural independence from its Eurocentric elite. An ironic origin considering her contemporary role symbolizing the integration of pre-Hispanic and post-colonial ideals. Today, she remains an important icon of Mexican national identity, and speaks to the unique and fruitful cultural dialogue which continues in Latin America.

Mexican culture is not alone in its remembrance of death, but it is unique in how, more often than not, these commemorations are more festive than somber. Whether it is under the scythe of Santa Muerte during the festivities of Dia de los Muertos, or in the “elegant” image of Calavera Catrina, death plays a central role in the daily lives of Mexicans and continues to provide a potent image for the inevitable cycles of life. Running through it all is a sense of humor and empowerment, which takes the hard lessons of death and embraces them with a fullness that is often surprising to those unfamiliar with these traditions.

On a personal level, death becomes an image of rebirth and renewal, while in the wider culture the imagery and practices associated with these traditions keep the memory of a turbulent history alive. For a nation with such striking disparities between rich and poor, death also becomes the great equalizer, in which even billionaire impresario Carlos Slim inevitably succumbs to Santa Muerte’s leveling scythe.

As they say in Mexico, “death is just and even-handed for everyone since we will all die.” For many, this unalterable truth provides a strong reason to celebrate life while there is still time.

Claudio Lomnitz, 2008, Death and the Idea of Mexico, Zone Books.

Stanley Brandes, 2007, Skulls to the Living, Bread to the Dead: The Day of the Dead in Mexico and Beyond, Wiley-Blackwell.

Dr. Andrew Chesnut is Professor of Religious Studies at Virginia Commonwealth University and the leading expert on Santa Muerte, the fastest growing new religious movement in the West. He is the author of the first and only academic book in English on the Bony Lady, Devoted to Death: Santa Muerte, the Skeleton Saint (OUP, 2012 and 2017). Follow him on Twitter. David Metcalfe is a researcher, writer and multimedia specialist focusing on the interrelationship of art, culture, and consciousness. He is a contributor at SkeletonSaint.com and Editor-in-Chief for the Windbridge Research Center's Threshold: Journal of Interdisciplinary Consciousness Studies. Follow him on Twitter.