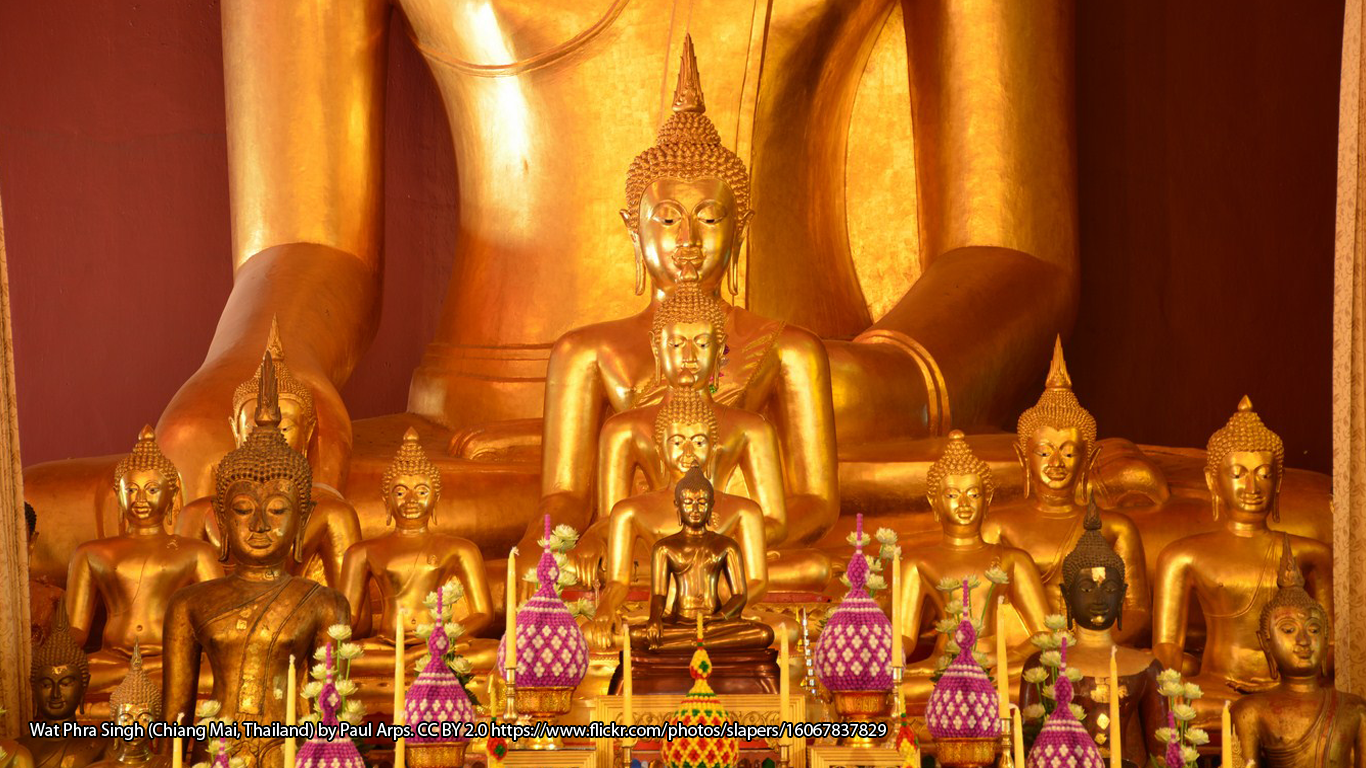 Sheer Zed describes his experience of the Lanna Buddhism rituals he took part in during his travels in Thailand.

Rituals can be transformational episodes that connect the initiand with other realms and higher cosmic plains. Thai Lanna Buddhist rituals are sublime and magnificent ceremonies.

Since my first contact in the mid 1980s with Zen Buddhism through The Beat Poet’s oeuvre, my love and respect of this fascinating philosophy—or as some call a ‘science of the mind’—I’ve been embarking on a life long journey through its vast and endless permutations. In the early 1990s I studied Nichiren Buddhism, which is a branch of Mahayana Buddhism based on the teachings of the 13th century Japanese Buddhist priest, Nichiren, and is one of the Kamakura Buddhism schools.  After emigrating to L.A. in 1999 I found myself in Borders Books and Music working as a member of the Special Process Team with access to countless occult books. Tibetan Buddhism, Hinduism, Brahmanism and any work that touched on Eastern philosophy were all fair game for my hungry and eager mind to ruminate upon.

My first visit to meet Peter Jenx, author and photographer of The Thai Occult book series in Thailand, was in late September 2017. Through Peter I have met in total four Ajarns (three in 2017 and the fourth in 2018). Ajarn is a Thai language term, which translates as ‘professor’ or ‘teacher’. It is derived from the Pali word acariya, and is a term of respect, similar in meaning to the Japanese sensei. The adventures I have experienced with Peter could very easily be contained in an article all of its own. However, I’ll be concentrating on four specific rituals and how they affected me personally, which I’ll be discussing here. In no way can I call these accounts complete or fully inclusive whatsoever.

Ajarn Apichai, a sublime and excellent master of Thai Lanna Buddhism, was moved to say on his Facebook account;

“The world of superstition, there are many more rituals, many patterns, many lines, many ways to do, North, South, North Eastern, Khmer, Myanmar, Thai and tribes with various different teachers and rituals.”

To say that this subject is complex would be an understatement.

The Satuang Ritual by Ajarn Suea

The Satuang Ritual was traditionally performed for soldiers returning from war but is now done for people wishing to improve their life and also to help with their business. Only Ajarn Suea holds the complete wicha (magical knowledge or practice) of this ritual. As requested, I gave Ajarn Suea my birth name and my date of birth (which was reconfigured into Thai time which does not run on the Western Anno Domini system, though Thailand does recognise it).  On the appointed time I sat down at home in the UK the day after my arrival back from Thailand and waited. An immense, bubbling and joyful glee inexplicably came up from the centre of my being and poured throughout my body. I was shocked. It blew my socks off. I was in a state of profound happiness. I came to the conclusion that I’d reached one of the numerous states of samadhi. The feeling lasted all day. I’ll never forget this beautiful feeling for the rest of my life. I was in awe at this master’s ability, an agent of transformation.

Ajarn Nanting, using the traditional sak yant rod, applied an invisible tattoo made up of secret herbs and oils to my upper back. The deity Mae Surasatee is the deva that rides a swan. She’s the deity in charge of Buddhist scriptures, knowledge and music. Sak yant are sacred tattoos of deeply varying symbolism and magical functionality. The experience was a painful, electric, intense and extremely powerful encounter. The design was tattooed onto my upper back over a period of 20 minutes but time seemed to slip and my mind, as in all extreme rituals, went into another realm, another place. Afterwards Ajarn Nanting, sorcerer and undertaker par excellence, said;

“This sak yant will help you to feel lifted.”

Lifted? My entire being was elevated. I soared high as a kite. I was flowing with infinite vibrations and held the bliss of knowing that my humble dreams—which were requested by Ajarn Nanting to be held directly inside my mind during the ritual—were to be made real and manifest during my lifetime.

This ritual literally burns away the past. Using wax from melted candles and the wicha of a close disciple of the Buddha, Maudgalyayana, who could use his psychic powers to travel through the realms of hell and ease the suffering of spirits trapped therein, the devotee has unhappiness and ill fortune removed. Through the blowing of hot melted wax while the devotee is underneath a sheet surrounded by sai sin (blessed thread from Buddhist ceremonies for the dead), a fireball is directed towards the person being cleansed. When the chanting had ceased a vast plume of flame suddenly hit me. I was shocked by its ferocity and heat. After more chanting the cloth was removed. Ajarn Apichai said that “something”, a spirit like entity, had been hanging around me. Since leaving Bangkok and my arrival in one of the most beautiful and charismatic cities in Northern Thailand, Chiang Mai, I had experienced what could only be seen from the outside as a nagging and hacking cough that clawed deep and spider-like on my upper chest. This had now completely vanished. I didn’t question the logic. I felt convinced that this ritual was a mighty force of good.

The Na Naa Thong Ritual or ‘gold face blessing’ is from divine knowledge and increases a person’s merit and virtue. It’s a channel opening ritual that clears any blocked lines within your life, be it love, business or any bad influences. The use of gold or gold leaf is an ancient practice that continues today in Thailand. I was asked to remove my t-shirt and lie down with feet away from the shrine and the ajarn. My guide, Peter, informed me gold would have to be literally slammed hard with force into areas around my face, forehead, eyelids, cheeks, jaw-line and body. Katas (mantras) were chanted; gold was blown directly onto my body and face, the very breath of life itself. This ritual is said to increase luck, prosperity and attraction. Afterwards I found that the lines of my fate had changed in subtle and numerous ways.

My experiences and interactions with the extraordinary Ajarns can easily be placed into the realm of the supernatural. Thai Lanna Buddhism is a highly unique and profoundly transmutational philosophy. It is a very beautiful hybrid, which encompasses and absorbs countless variations of learning and ritual. It contains the disciplines of shamanism, divination, necromancy, herbalism, astrology, numerology, mediumship, animism, deity worship, sak yants, chanting, spells, amulets, buchas (sacred statues with active spiritual components), rituals and dreams all mixed within the framework of Buddhism, Hinduism and Brahmanism.

Sheer Zed, My Second Thai Occult Road Trip; A Second Step on the Stairway to Somewhere Else

Susan Conway, Tai Magic: Arts of the Supernatural in the Shan States and Lan Na

James H. Austin, Zen and the Brain: Toward an Understanding of Meditation and Consciousness

Sheer Zed is an electronic musician, artist and shaman. He has been releasing music since 2002 and has a keen interest in the occult, philosophy and Thai Lanna Buddhism. View his website here.