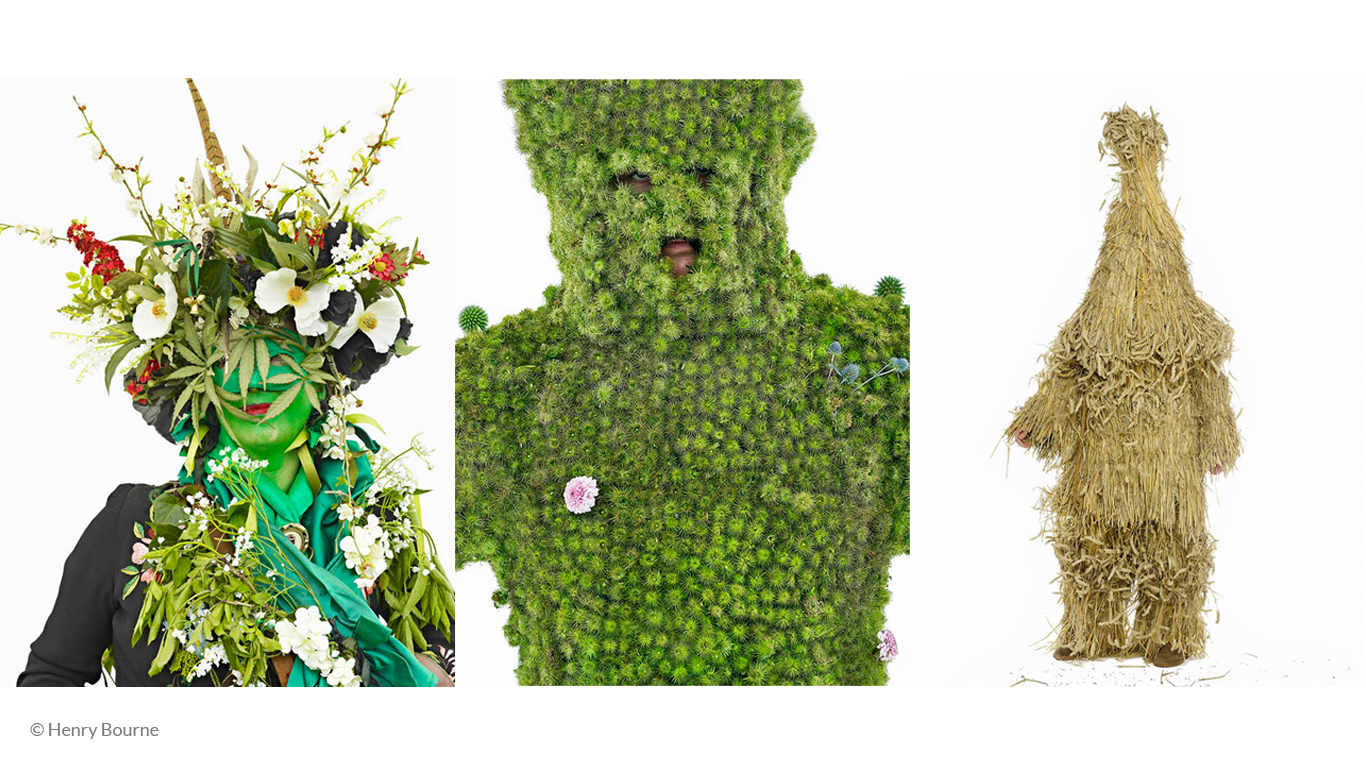 Arcadia Britannica is an ongoing photographic portrait project, of some the individuals involved in the myriad of different British folklore traditions and customs, around the United Kingdom.

Starting in 2009, I travelled around the UK to various seasonal rites and folklore festivals to photograph the diverse mix of people who participate in these rituals. These unique traditions & customs are flourishing and evolving. As a photographer I wanted to document these particularly British individuals exactly as they are without further embellishment.

I decided that the best way to record this was to concentrate on the individuals rather than the perimeter events, working within a portable studio at each event, to link each event and the photographs together. The first part of “Arcadia Britannica” has been published as a book by Thames & Hudson.

My starting point for the portrait series was the Victorian Member of Parliament and amateur photographer Sir Benjamin Stone’s series of photographs within Records of National Life and History Volume I: Festivals, Ceremonies and Customs. Combined with the collection of his photographs at the Victoria & Albert Museum in London.

The initial idea of a new 21st century British folklore portrait came from a discussion with my friend Simon Costin, designer and the director of the Museum of British Folklore, who is campaigning to raise funds and awareness for the UK’s first museum to exclusively cover British folklore. In 2009, Simon Costin took a miniature Museum of British Folklore around the UK in an elaborately styled 1960’s caravan as part of the museum’s journey towards a permanent home. Initially I accompanied him along with my portable studio and then went on both alone and with Simon to other events around the UK. He has been an integral part of the photographic project, suggesting events and sharing his contacts, enthusiasm and passion for British folklore. The project has been in collaboration with Simon, whose help and knowledge has been invaluable. Simon has written the introduction and an essay for Arcadia Britannica, along with a preface by the photographic historian Robin Muir.

The Endless Cavalcade (by Alexander Howard published in 1964) lists a British rite or ritual for every day of the year, there are now approximately 720 recorded events, rites and ever changing customs practiced in the UK each year and I have only scratched the surface photographically.

By no means are the photographs in Arcadia Britannica intended to be a comprehensive document of British Folklore today, but merely a snapshot of a small number of the individuals involved today.

The people behind the images come from all walks of life including; nurses, builders, a Japanese translator, civil servants, business people, and the graphic designer of Hibernian football club, amongst others. A complete cross section of backgrounds and occupations appear within British Folklore. Wherever possible we captioned the subject’s professions within Arcadia Britannica.

Today we find ourselves in the midst of a British folklore renaissance, a new surge of interest in all things folkloric, within music, art and fashion. There is a growing popular desire to reconnect with our heritage, nature and our environment, perhaps as a reaction against our on-line, yet impersonal technological age.  British folklore traditions and rituals have had perhaps a rather tame reputation to date, which is unfounded. There is a fascinating world of bizarre tales and characters, brimming with idiosyncrasies and eccentricities, together with a renewed modern 21st century populism and enthusiasm, coupled with British history and myth.

Folklore is a living, evolving culture that doesn’t stand still; it adapts and references contemporary culture.

By its nature, folklore’s origins are usually unclear and ever changing, adapting to contemporary society. It celebrates renewal, nature, and green environmental issues, all of which are thoroughly modern concerns. The Jack in the Green festival in Hastings is a good example of the evolution of a folklore event; first recorded around 300 years ago as a May Day celebration of the start of summer in Hastings, its roots are probably from the Romans and Celts celebrations of the beginning of summer. The Jack in the Green parade had all but disappeared by the start of the 20th Century. It was resurrected in 1983 and today is an ever-popular annual event with some new traditions as well as the old. Along with the traditional costumes (people dressed as milkmaids and chimney sweeps) there are new contemporary participants, often dressed in extravagant  ‘tatter’ clothing decorated with foliage and flowers, and their faces painted green.

The first part of “Arcadia Britannica A Modern British Folklore Portrait” has been published as a book by Thames & Hudson but the photography for the project continues.

Published by Thames & Hudson. With an introductory essay by Simon Costin, Director of the Museum of British Folklore, and a preface by Robin Muir, photographic historian.

Records of National Life and History Volume I: Festivals, Ceremonies and Customs by Sir Benjamin Stone. (Out of print but available on ABE books).

The Endless Cavalcade (by Alexander Howard published in 1964).

The Museum of British Folklore: http://www.museumofbritishfolklore.com

Jack In The Green

My photography work has appeared in numerous exhibitions worldwide, including; Folklore & Photography, at the Towner Gallery for Contemporary Art 2012. Modern British Folklore Portraits at the Central State Exhibition hall in St Petersburg. Now & Then an exhibition of contemporary art and historical objects at Harris Lindsay London 2011. My work is currently being exhibited as part of Vogue 100: A Century of Style until the 15th of August 2011 – at the Manchester Art Gallery. My work forms part of the National Portrait Gallery’s (London) permanent collection of portrait photography. My first monograph book Arcadia Britannica, a Modern British Folklore Portrait was published in 2015 by Thames & Hudson. I am a regular contributor to Vogue and Harper’s Bazaar magazines worldwide and T: The New York Times Magazine. My editorial work has also appeared in, amongst others, The Conde Nast Traveller, Numero, W, The Wall Street Journal Magazine, Wallpaper, The World of Interiors & Vanity Fair magazines.