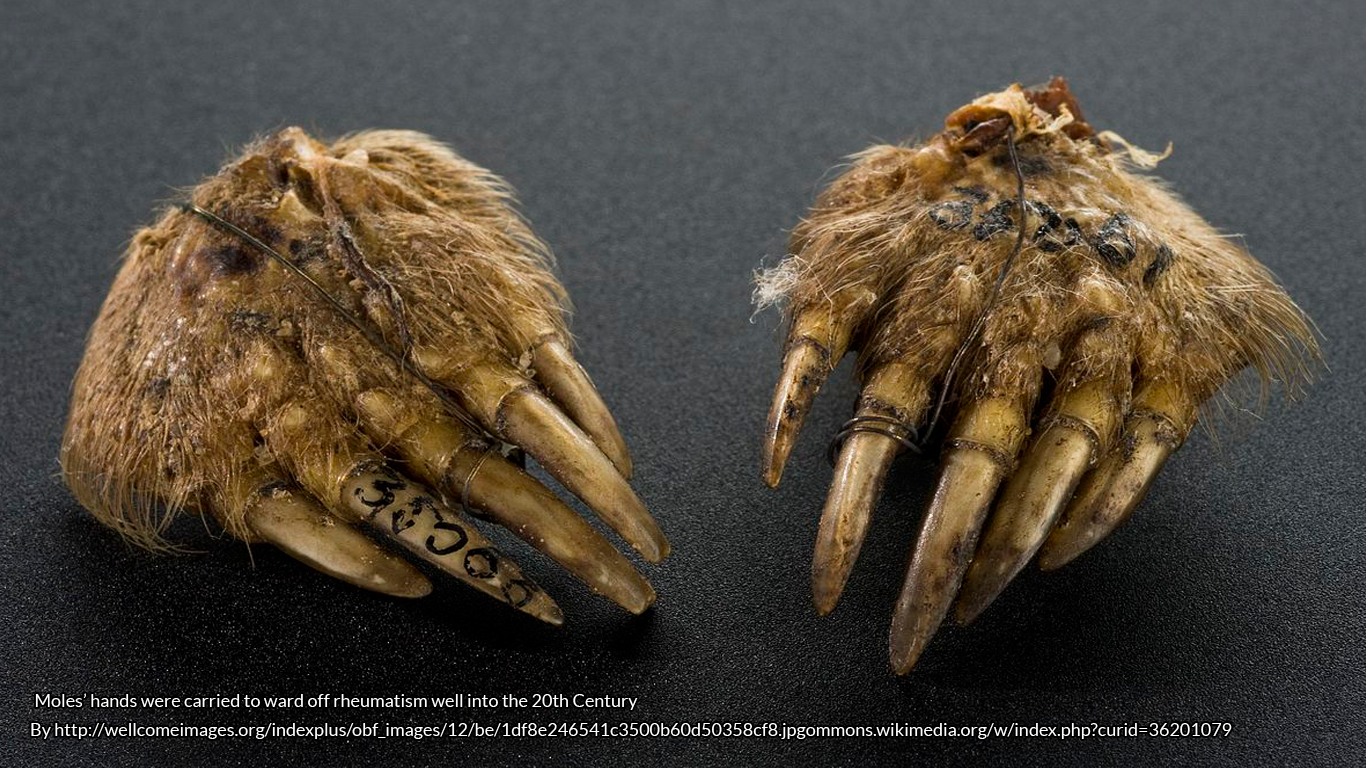 Today, moles are usually unappreciated residents of our gardens and fields, but they are embedded in folklore and for centuries were used in remedies. The use of natural cures and preventions was closely linked to a belief that the world was governed by forces that could be influenced by either healing white magic or harming black magic, and many objects and substances, animate and inanimate, were employed in such practices. Moles – dark, hidden and mysterious – were widely used in folk cures.

The earliest mention comes from Pliny the Elder’s Naturalis Historia published circa AD 77–79[i].

‘Of all the animals the magi hold moles in highest regard … they give credence to no other entrails as much, and they credit no other creature with more supernatural properties, so that if someone should swallow the heart of a mole, fresh and still palpating, they promise the power of divination and foreknowledge of future events. By removing the tooth of a living mole and binding it to the person, they claim that toothache can be cured.’

People in the late eighteenth century believed that if you held a mole in your hand until it died your hands would acquire healing power[ii], and a nineteenth-century cure for ague was the powder made from a skinned and dried male mole[iii]. (Ague was a fever commonly associated with malaria, which from the fifteenth century onwards was endemic in the Fens and along the coasts and estuaries of England). Until the twentieth century people believed that the blood of a freshly killed mole dripped onto warts would cure them, and took sugar dripped with blood from the nose of a living mole to control fits[iv]. A mole cut in half, or skinned alive, would be bound to the neck until it rotted to treat cysts on the throat and goitre[v].

Here’s Knight’s gruesome account of a seventeenth-century treatment for epilepsy:

‘For a man take a she mole, & for a woman a he mole & setting by a good fire let the party put the moles Head in his mouth & biting it, sucke the blood out of the moles mouth as lively as it can …’ [vi]

‘Take a live Mole, and cut the throat of it into a Glass of White-wine, and presently give it to the party to drink …’ [vii]

Farm labourers once carried moles’ legs in a bag around their necks to protect against toothache[viii]. Such bags also treated epilepsy and scrofula (a skin disease), and people kept moles’ hands in their pockets to guard against rheumatism[ix]. Just in case you were hoping the practice of using moles in medicine had been banished to distant history, moles’ hands and feet were still being carried as remedies in the Fens as late as 1971[x].

In addition to their use as remedies, moles’ hands were also carried to ward off evil. Nineteenth-century Italians did this[xi], as did their contemporaries amongst English-speaking Americans[xii]. I cannot find any similar customs in Native American folklore, and assume that they went with the early European settlers across the Atlantic.

Moles were also used in witchcraft. Most people in seventeenth-century Britain believed in witchcraft, which became a criminal offence in England in 1542 and in the worst instances was punishable by death. A well-known English case was that of the witches of Belvoir[xiii], who were executed at Lincoln, March 11th 1618. One of the women involved was Joan Willimot who, according to the testimony of Ellen Green, employed a mole as a familiar (a spirit in animal form that did the bidding of witches):

‘Ioan Willimott called two spirits, one in the likenesse of a Kitlin [kitten], and the other of a Moldiwarp [mole]: the first, the said Willimott was called pusse, the other hisse, hisse, and they presently came to her, and she departing left them with this Examinate and they leapt upon her shoulder, and the kitlin suckt under her right eare on her neck, and the Moldiwarp on the left side in the like place. After they had suckt her shee sent the Kitlin to a Baker of that Towne whose name she remembers not, who had called her Witch and had stricken her; and bad her said spirit goe and bewitch him to death: the moldiwarpe shee then bad go to Anne Dawse of the same towne and bewitch her to death, because she had called this examinate witch, whore, jade &c. and within one fortnight after they both dyed.’

Joan argued her innocence claiming that although she did practice magic and had a familiar, her magic was white and her personal spirit a healing being called ‘Pretty’. It seems as if Joan, unlike some of her fellow accused, was let off. She was lucky; witch-hunters claimed the lives of an estimated 60,000 people in Europe, mostly women, between the late 15th and late 18th centuries[xiv].

Moles have long been misunderstood. Lionel Adams was told in 1903 that moles have a single drop of blood, eyes on the soles of their feet and that those found above ground in daylight were taking the air or, alternatively, moonstruck[xv]. (Such ideas take time to fade; I was told by an Oxfordshire farmer that moles’ ears are under their armpits, to keep the soil out.) Adams was writing at a time when moles’ amputated hands were still being used to relieve rheumatism. A belief in the power of using living animals meant moles died horribly, but was held at a time when healthcare had to be practiced with little scientific reasoning and people died from afflictions they would easily recover from today. We no longer mutilate moles for cures, but, although we now know far more about them as animals in their own right, we still kill them in their thousands for spoiling our gardens. Which of us, our forebears or their descendants, can claim the stronger justification?

[iii] Adams, L. (1903) A contribution to our knowledge of the mole (Talpa europaea). Memoirs of the Manchester Literary and Philosophical Society. Old series 47: 1-39

[xv] Adams, L. (1903) A contribution to our knowledge of the mole (Talpa europaea). Memoirs of the Manchester Literary and Philosophical Society. Old series 47: 1-39

Rob Atkinson is a writer and biologist who has spent many years in academia and the charity sector. He is the author of Moles, published by Whittet, numerous book chapters, scientific papers and technical reports, and has appeared many times on television and radio in the UK and US. He has various degrees in zoology and creative writing, from the Universities of London, Oxford and East Anglia. You can find Rob on Twitter, Facebook and LinkedIn, or view his author page.