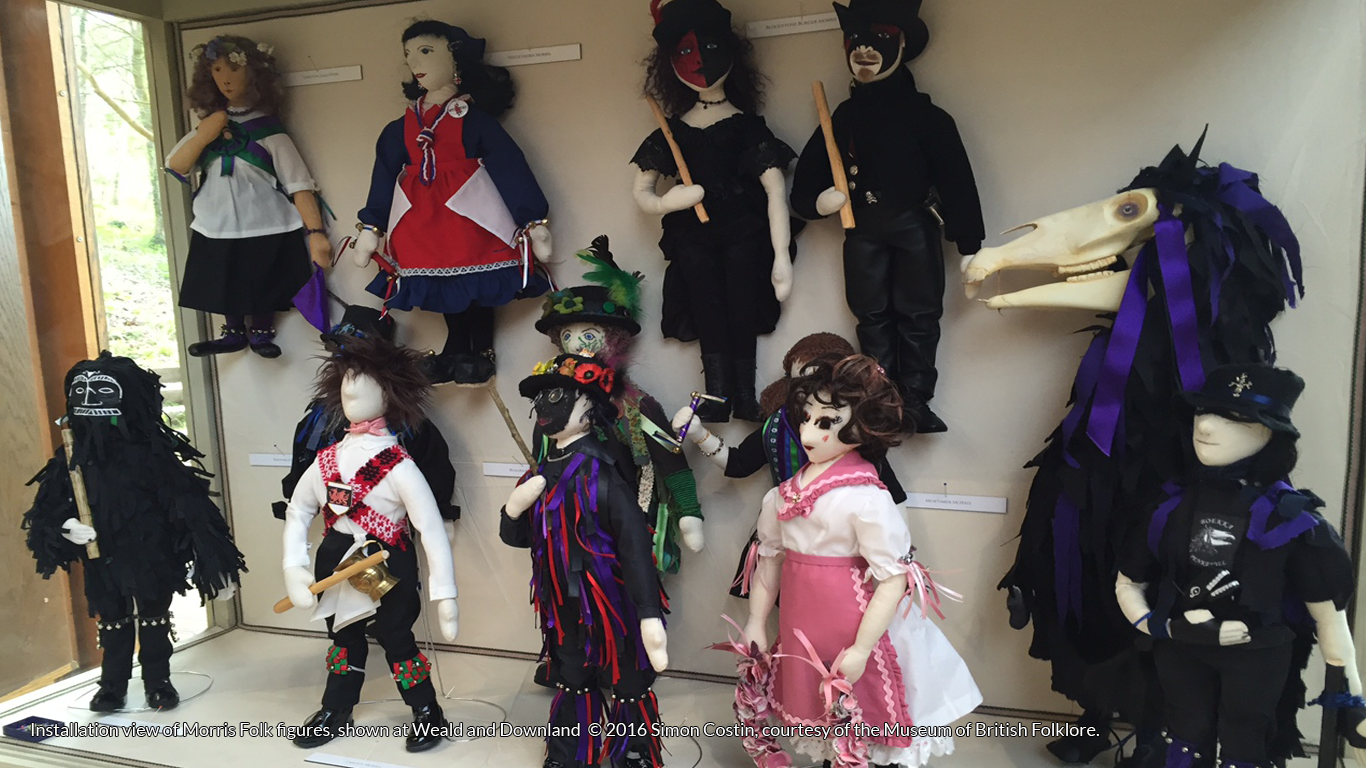 Morris Folk arose from a desire to document something as ephemeral as dance in new and innovative ways. In common with many folk traditions, Morris dancing tends to occur at fixed points in the seasonal calendar and has little material culture associated with its practice.

Customs can be peculiar to one locality, or common to many, it is these characteristics which define the fluidity of folklore. Although its roots are sometimes in the distant past, folklore is always contemporary, as it is created anew every year.  It is constantly mutating and this, in part, has ensured the survival of these old ways. Morris dancing, in particular, is an amazing example of revival and resurgence.

With ancestry traceable to the court of the 15th century, with its ‘moreys daunce’ featuring dancers in colourful costumes and,by the early 16th century, to a fixture of church festivals. As the century wore on, the Shakespearian performer William Kempe danced the Morris from London to Norwich in what he called his ‘Nine Days Wonder’, cheered on by crowds along the way.

Its popularity dwindled during the Second World War, only to be revived in the 1970s and by the millennium, hundreds of sides were registered.

How best, then, to record the long established Morris dancing tradition for display within the context of a museum? This is the question that Simon Costin, Director of the Museum of British Folklore (MoBF), asked himself in 2009, when thinking about Morris dancing and its central role within British folk culture.

The project was also conceived as a way of generating material for the permanent museum, as many items associated with folk tradition are used for one day then discarded and remade the following year.

Inspired by a collection of dolls wearing the Bampton Morris team’s outfits, dating from the 1920’s (held in the collection of the English Folk Dance and Song Society), Simon set about commissioning a series of cloth dolls to be sent out to Morris sides throughout the country.

A call for contributors was posted via www.museumofbritishfolklore.com and so began the process of posting out these blank dolls to be clothed in miniature versions of the sides’ costumes by participants and associates of the various teams.

By 2015, nearly 500 dolls had been sent out, with around 100 completed dolls being returned.The project was growing apace, with sides keen to see their work on display. Without a permanent home, the Museum of British Folklore has been collaborating with existing institutions to showcase folk culture and a conversation with the London College of Communication resulted in the exhibition ‘Figures of Folk’. Consisting of a series of large-scale portraits of the Morris dolls by Graham Goldwater.The exhibition also displayed letterpress prints by LCC students inspired by the project, shown alongside a selection of the dolls themselves.

The dolls had another outing in 2016, when they were displayed at the Weald and Downland Museum in Chichester which was visited by many Morris sides as part of the museum’s Food and Folk weekend and Morris Day of Dance, generating further interest in the project.

They have been made with amazing attention to detail: from the inclusion of human hair, to miniature buttons and accessories. Many of the dolls that have been returned to the museum are accompanied by information about their makers, further history of the Morris sides and often anecdotes – such as the story behind Bakanalia Morris’ doll with a splint. Apparently, a member of the team had returned from a skiing trip with a broken leg and the maker of the doll decided to mark it for posterity.

In this way, the Morris dolls are a record of a moment in time, displaying information not only of the costumes but of the people who made them and the current team members. The Museum of British Folklore would like to develop the project to undertake more research into the stories behind the dolls, with the eventual aim that every Morris side in the land (800 and counting) has the opportunity to be represented by its own doll. It is envisaged that an entire exhibition space in the permanent museum will be devoted to the project.

This taxonomic arrangement of Morris dancers will highlight the rich variety of Morris dancing outfits and demonstrate the Morris costume’s evolution, from the adaptation of everyday clothes in the 16th century, when the dance became more popular amongst the public, to the colour-coded typologies of today. It is hoped that the dolls themselves could be used as a valuable learning resource, as examples of the history of costume, the use of craft and links between traditions and dress. Morris Folk has the potential to be a significant conservation and education project, involving collaborations between practitioners, craftspeople, academics and conservators.

In many ways, the Morris Folk project typifies the Museum of British Folklore’s approach to folk culture with a focus on intangible heritage made tangible and new artworks and craft skills developed in the process. Involvement of practitioners is key to the authentic nature of the project and this methodology presents a unique opportunity to work with the keepers of the flame: from folk revivalists to documentarians, to contemporary artists whose work reflects the influence of folk upon their imaginations.

For a taste of the Museum of British Folklore’s approach to working with folk culture, come and visit our current exhibition The Ballad of British Folklore: a celebratory, festive show commemorating MoBF’s achievements to date and looking at what the future holds.

About the Museum of British Folklore

MoBF has been imagined as a museum for the 21st century – an immersive space with a strong temporary exhibitions programme featuring themes which take inspiration from British folklore. MoBF will be outward-looking and collaborative in spirit, engaging with global initiatives to safeguard and represent peoples’ heritage. Morris Folk is reflective of the MoBF ethos of taking an existing tradition, using it to inspire, and creating new work.

Simon Costin’s background in theatre and set design informs the aesthetic of MoBF with exhibitions planned that conjure the sights and sounds of seasonal traditions. The vision for the permanent museum is as a striking combination of the ancient and the contemporary (like folk culture itself). This is exemplified in the designs for the museum, by the award-winning ARA, architects of the Ditchling Museum.

To support the creation of the world’s first centre devoted to British Folklore, please visit: www.museumofbritishfolklore.com/become_a_friend/

Simon Costin is an artist and art director, working on high profile campaigns for clients such as: Hermes, Martin Margiela and Swarovski. He founded the Museum of British Folklore in 2009, and to date has produced over ten exhibitions, with plans to build a permanent museum devoted to folk culture.