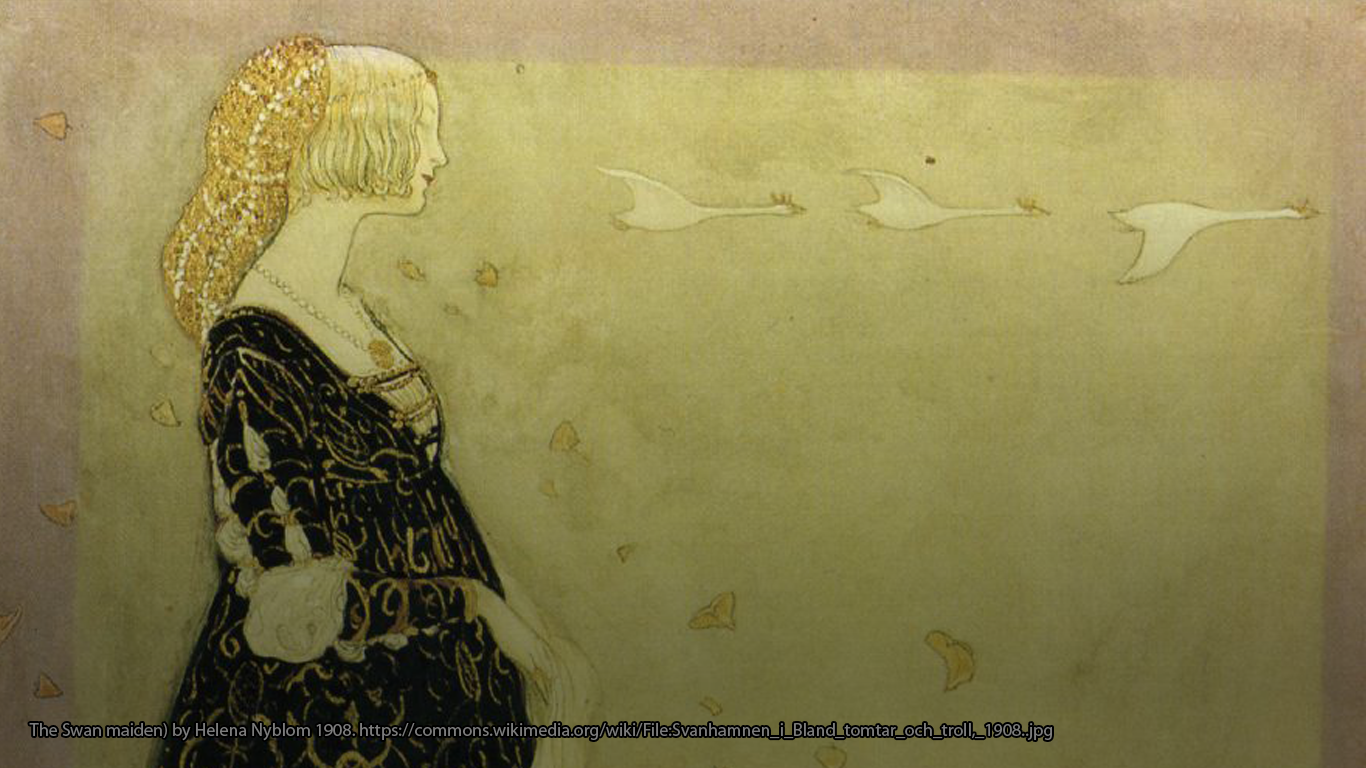 What is it about swans? They feature heavily in Western European folklore, a graceful animal for a human to be transformed into as a curse, or shapeshifting into humans at will. It’s fair to say that there’s an inherent beauty and tragedy in being turned into a swan, as opposed to a frog or a rat. And it’s also fair to say that many authors have drawn on these tales as inspiration for contemporary fiction, including me.

In Celtic mythology, the swan is seen to have links to the spirit world, often able to shift between the earthly and supernatural realms. The 17th century Irish ballad ‘Molly Bawn’, which inspired my novel Swansong, features a woman who is mistaken for a swan and accidentally killed. It certainly has its roots in more legends and lore.

In the tale of Cú Chulainn (from the Ulster Cycle), the Scandinavian princess Derbforgaill is desperately in love with the titular hero and turns herself and her handmaidens into swans to be near him more swiftly. Cú Chulainn, on seeing the birds, picks up a stone and hurls it at the swan, who transforms back into the princess. He saves her by sucking the stone out, but alas, then cannot marry her (you can’t marry someone whose blood you have tasted!), and she marries his foster-son.

In Germanic folklore, Wayland the Smith falls in love with a swan maiden, Swanhilde, who is the daughter of a fairy king and a human woman. One day Wayland rescues her when she is wounded in the air by a spear. Swanhilde relinquishes her wings and her magical ring that enables her shapeshifting power. She is later kidnapped, but Wayland finds her and, though he is crippled by his enemies, fashions himself wings and helps them both escape.

In the Irish legend ‘Children of Lir’ (part of the Irish Mythological Cycle), the second wife of the sea god Lir is jealous of the four children he fathered with his first wife. She transforms them into swans, a curse to last 900 years and until a church bell rings, or until they are blessed by a monk. The stepmother is found out and turned into an air demon, and the children, after a long spell as swans, are transformed back into humans — albeit elderly ones who quickly die.

‘The Six Swans’, a fairy tale collected by the Grimm Brothers, gives a similar story. Another jealous stepmother makes magical shirts which, when thrown over the six brothers from her husband’s first marriage, transform them into swans. The only way for the curse to be broken is for their sister to sew shirts out of nettles and not speak for seven years. One brother loves his swan life and retains a single swan-wing — an image picked up by writer Zoe Gilbert in her exquisite collected stories, Folk, which features one character who has a wing for an arm.

‘The Swan Maiden’ myth seems to sit with the animal bride trope found in folklore all over the world. Usually in the story, a young man steals the feathers or ‘swan skin’ of a shapeshifting swan maiden when she is in human form and bathing in water. He marries her and, without her feathers, she is unable to fly away. She bears him children, and either she — or they — find the feathers, and she promptly leaves them all. Global variants include the selkies, seal people from Orkney and Shetland, a dove in Italy, a wolf in Croatia, and a buffalo in parts of Africa.

My own novel Swansong draws on the ballad ‘Molly Bawn’ (Roud 166). Here, Molly is mistaken for a swan, shot, and killed. It’s also known as ‘Molly Bán’, ‘Molly Bond’, ‘Molly Vaughan’, ‘Molly Van’, ‘Polly Vaughn’, ‘Polly Vaughan’, ‘Polly Von’, ‘The Shooting of His Dear’, ‘The Shooting of His Deer’, or ‘The Fowler’, amongst others. Molly Bán, or Maílí Bhán in Irish Gaelic, translates as ‘Fair Mary.’ It is most likely of Irish origin and there are also versions in Scotland and England, America, Canada, and Australia. In some versions, Molly is mistaken for a deer rather than a swan. It’s been speculated that it derives from a real incident, and indeed accidental shootings do still happen – a woman was killed in New York State last November at dusk, thought to be a deer[i] – but it bears such strong similarities to several of the myths above that it must have its roots there.

‘Molly Bawn’ in its (relatively) existing form was probably recorded around in the 17th century, and was found in many 19th century broadsides. It is noticeable for its absence in the collection of tragic ballads known as the Child Ballads (as collected and catalogued by Francis J. Child); the publisher Robert Jamieson published it in 1806 in his Popular Ballads and Songs from Tradition, having heard it sung by a maidservant. He wrote about this song:

‘This is indeed a silly ditty, one of the very lowest description of vulgar English ballads which are sung about the streets in country towns and sold four or five for a halfpenny.’

There is a lovely story about the Irish singer, Packie Manus Byrne, whose tune I use in my own version, learning this song ‘from Charlie Waters of Meentinadea near Ardara, Donegal, many years ago when they were both trapped in a deserted farm house at Glendown during a snow storm. The farm belonged to Packie’s sister who was away in hospital expecting a baby, and Packie and Charlie had gone there to look after the farm animals, expecting to only stay for an hour or two. A storm blew up and it was not until four days later that they were able to leave the house where they had been trapped without food or turf. In order to keep warm and cheerful Packie and Charlie had huddled together and spent the time teaching one another songs.’[ii]

I arranged the song for my first You Are Wolf album, Hawk to the Hunting Gone, having come across a story version on the Ardnamurchan peninsula in the West Highlands of Scotland that seemed to revisit the song’s more supernatural roots, with a jealous mother and some actual transformation. The song arrangement was developed, bit by bit, into a novel with a contemporary narrator.

I was particularly interested in the journey of the folk song – how there is never one version, but many. In Swansong, two versions of the folk song/story interact, and I see the novel as simply another retelling of the story. I’m a strong believer in allowing folktales and songs to keep morphing and transforming, just as these folkloric protagonists often do.

Win a copy of Swansong by Kerry Andrew

The wonderful folks over at Jonathan Cape have offered a copy of Kerry’s amazing new novel, Swansong, for a lucky #FolkloreThursday newsletter subscriber this month!

‘Polly Vaughan is trying to escape the ravaging guilt of a disturbing incident in London by heading north to the Scottish Highlands. As soon as she arrives, this spirited, funny, alert young woman goes looking for drink, drugs and sex – finding them all quickly, and unsatisfactorily, with the barman in the only pub. She also finds a fresh kind of fear, alone in this eerie, myth-drenched landscape. Increasingly prone to visions or visitations – floating white shapes in the waters of the loch or in the woods – she is terrified and fascinated by a man she came across in the forest on her first evening, apparently tearing apart a bird. Who is this strange loner? And what is his sinister secret?’

Sign up for the #FolkloreThursday newsletter to enter (valid August 2018; UK & ROI only).

Kerry Andrew is a London-based composer, performer and writer. She has a PhD in Composition from the University of York and has won four British Composer Awards. As a composer, she specialises in experimental vocal and choral music, music-theatre and community music. She performs with the award-winning Juice Vocal Ensemble and with her alt-folk band You Are Wolf. Her debut novel, Swansong, was published by Jonathan Cape in January 2018. Follow her on Twitter, or visit her website.