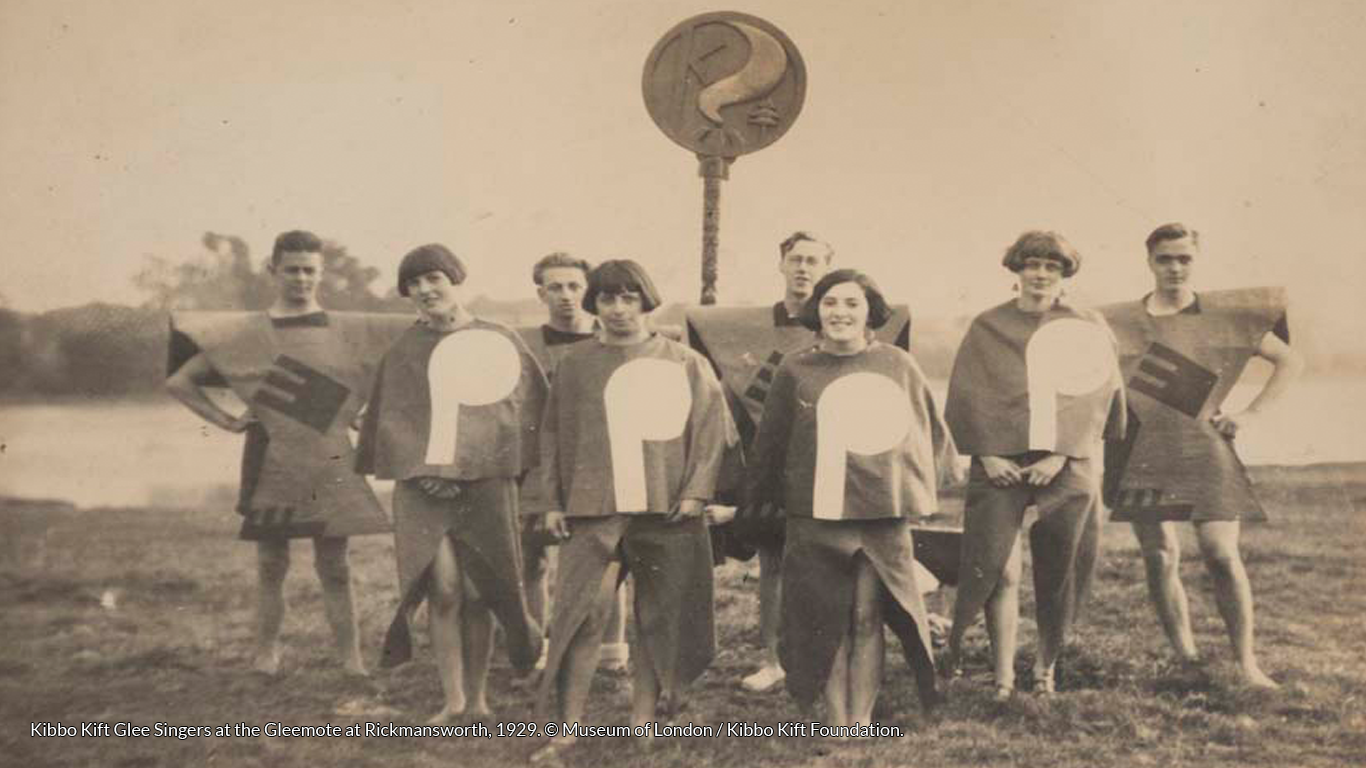 What sort of music did a 1920s utopian youth movement fiercely opposed to mainstream society actually like? The Kindred of the Kibbo Kift (‘KK’) were creatures of their time. Given the group’s reverence for nature and pre-industrial Englishness, one might have expected them to be fervent folk song and folk dance revivalists, as many were in the 1920s. But the Kindred were, as always, a little different.

The Kindred of the Kibbo Kift were founded in 1920, an expression of the moral discontent that followed the First World War. The group was formed around the charismatic and autocratic John Hargrave (woodcraft name White Fox), whose vision set the ambitious tone: the Kindred’s mission was to evolve themselves into a new and better race of human beings. Cultural pursuits were important in their universe: creativity had to be nurtured and developed, along with physical health and self-discipline. Art, design, dance, poetry (including Norse sagas) puppetry and mumming plays were all practised with gusto. But what about music?

When writing my book on the Kibbo Kift, I was always slightly puzzled by the role of music. It always seemed a bit marginal to Hargrave’s vision, despite pronouncements on paper to the contrary. In 1925 it was declared that ‘KK is developing its own music’ and kinsfolk were invited to ‘a rehearsal camp for minstrels and dancers’. Anyone who was a ‘player of wind and stringed instruments’ was asked to bring their instruments to the Althing (the annual gathering). In 1928 Hargrave invented an official role in his organisational structure, ‘Master of Kin Musik’: but all this activity didn’t seem to amount to anything much more than an enthusiasm for group singing.

Right from the start, camp fire songs and marching songs were all thoroughly approved of. As a former scout master who had also seen army service, Hargrave knew the bonding power of song. In 1923 the Kibbo Kift newsletter carried a message from the leader, in typically forthright tones:

‘I am making preparations for a Kibbo Kift song book. I ask you all to send me any suggestions for songs, glees, ballads and ditties to be included in this little book. If you do not respond to this call for help you will have to put up with my selection. Do not afterwards come along and say “Why didn’t you include Jimmy go round the Green-O?” It will be your own fault’.

Hargrave was soon printing some of ‘his’ KK songs, which were essentially his words attached to old tunes. Thus in June 1923, the newsletter printed The Hoods of the Kindred , which was sung to the tune of The Bonnets of Bonnie Dundee:

All the laws of convention are worn to a shred

So the Great Laws of Nature must hold in their stead

Then each hefty youth who is honest and gay

Must follow the hoods of the Kindred I say.

This was an easy enough model to follow and Kinsfolk responded. Mohngotaysee, from Bromley’s Tribe of the Rising Sun contributed The K.K. Life to the tune of The Londonderry Air: ‘Come, leave your towns, your smoky streets and houses / and roam with us in Nature’s glorious world…’. Good King Wenceslas was transformed into a KK carol by Sea Otter: ‘Folk of Watlingthing went out / for their Christmas camping… ’. The songs in the first Kibbo Kift songbook typically mix new words and old airs. Thus: All Hael! was credited ‘Words – Rolf Gardiner. Air – version of Monk’s March’.  All Hael! became a rousing favourite:

All Hael! All Hael! We are the lashing flail

That beats the golden life out of all things stale

We Come, We Come , We Come, The Kibbo Kift

Children of the Fire and the Wide World’s Drift.

Later editions of the Kibbo Kift songbook suggest a bit more musical originality. Songan, Wabasso and Hawk all contributed original melodies. Judging from the single staves printed in the song books, all seem to be easy-to sing compositions, some sounding a bit folk-ish, others more like church hymns. Hawk (Stanley Dixon) appears to have developed something of a song writing partnership with Hargrave himself. Thus Hereward the Wake Awake! was credited in the songbook as ‘Words: White Fox. Music: Hawk’.

One eye is blue

The other is grey;

All together – one, two, three!

For the Kindred’s sake

A Berserk whom none

All together – one, two, three!

By the late 1920s the Kindred’s official structure included a Glee Writer (song writer) and a group of Glee Singers, both with their own ‘sigil’ (symbol); and performance tabards. Singing was by this time an essential ingredient of Kibbo Kift hikes and Glee Motes – cultural camps where Kinsfolk performed mumming plays and dances for each other. Kinsfolk were typically young workers living in the suburbs (Stanley Dixon, for example, was a shop assistant at Liberty’s). Singing was part of suburban culture: and in some ways the practice of re-cycling  popular tunes was rather Kibbo Kift in itself. Hargrave looked to the future just as much as the past and was scornful of those he thought were just reviving things for the sake of it, a ‘harmless outlet for young fellows who can afford the pastime’, as he later described Rolf Gardiner’s interest in folk dancing.

Singing was one of the things that carried over into the next phase of the Kibbo Kift’s existence. Around 1930 Hargrave became increasingly agitated by the unfolding economic crisis and transformed his group into ‘the Green Shirt Movement for Social Credit’. The Kindred were now political activists who wore military-style green uniforms rather than Saxon-style tabards. Singing transferred easily into the group’s new mission of marching through city streets to support their cause of reorganising the nation’s economy along Social Credit lines. Singing helped ’raise the emotional tempo’ of the masses and the Green Shirt Song book contained some stirring anti-capitalist anthems, including The People’s Army:

Are we to starve with Plenty all around us?

Are we to die, because of Money Law?

In Battle cry the Money Power has ground us

Into the Dust and Death of Bankers War

The People’s only Fight!

Now hear the roar that drums and feet are beating!

A thousand footsteps ringing out this song,

None of the songs in the 1936 green shirt songs are credited to individuals (although copyrighted to the movement) but I suspect this is another ‘Words: White Fox. Music: Hawk’ composition.

There is a lot more that could be said about the Kibbo Kift and music. My impression is that Hargrave himself saw music as a slightly lesser art – he did not play an instrument himself and there is no strong evidence that he listened to music for pleasure. Nevertheless, for his Kinsfolk followers, rousing singing was a strong part of the attraction of being Kibbo Kift.

Cathy Ross is Honorary Research Fellow at the Museum of London, where the Kibbo Kift archive is kept .