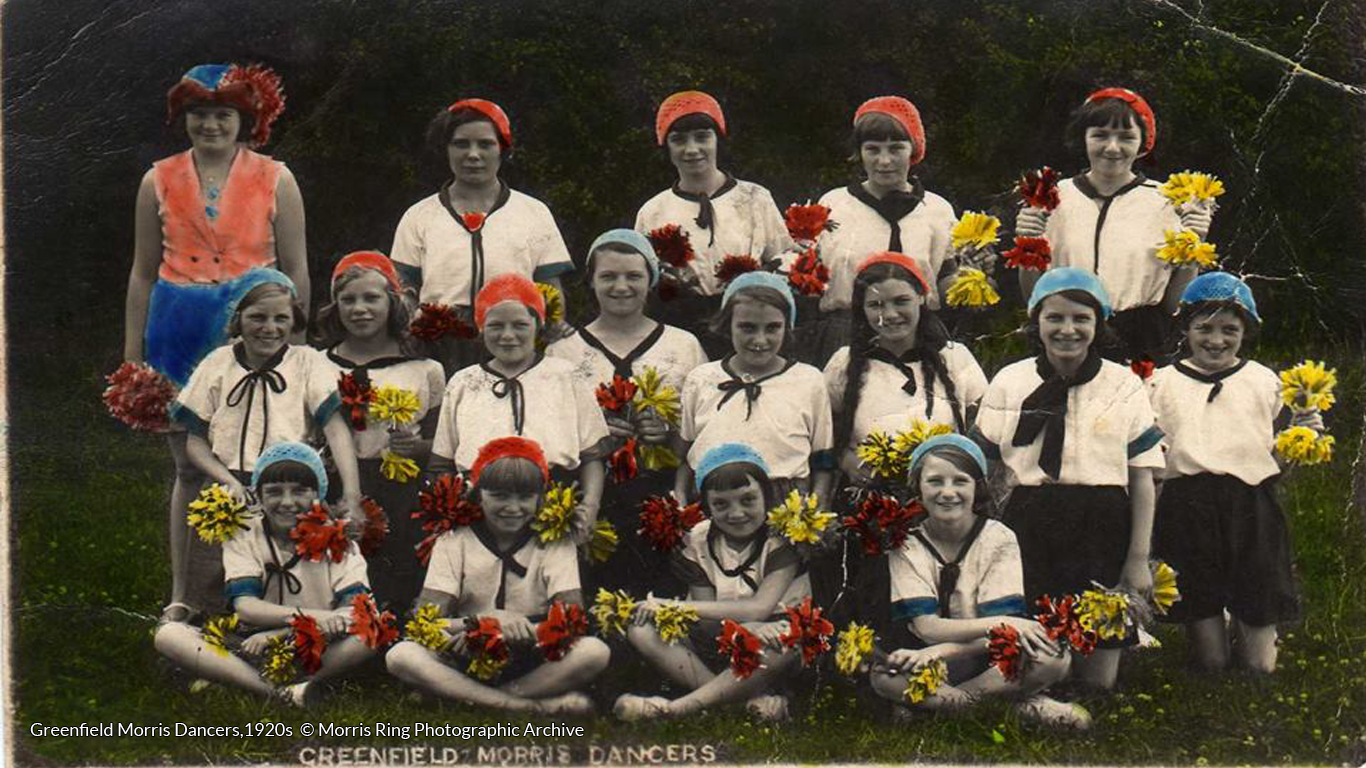 Often overlooked in accounts of English morris dancing, girls’ (carnival) morris is a highly competitive, team formation dance popular in the Northwest of England and parts of North Wales. However, it demonstrates convincing claims to an historical depth and geographical continuity comparable with many of the performances associated with the English folk movement. Perhaps even more importantly, it represents a vibrant, living tradition, which has sidestepped recurrent cycles of extinction and revival common to  many dominant narratives of folk performance. Ethnomusicologist and artist, Dr Lucy Wright reflects on her ongoing fieldwork within the  girls’ Morris community …

I come to know them first while pouring over photographs in morris dancing archives; crinkle-cornered black-and-white film blushing into Kodachrome as I flick forwards through the contents of scrapbooks, travelling in time. Some snapshots reveal a performance in action; teams of girls in matching uniforms carrying crepe paper pom-poms, marching high-kneed in street parades and dancing in formation on crowded carnival grounds. Other photographs are more formally posed; troupes cluster around a glut of trophies or a hand-painted shield, grinning proudly for the camera, wearing waistcoats heavy with medals. Later on, I attend weekly competitions hosted in out-of-town sports halls and suburban community centres, and am almost overwhelmed by the popularity and vibrance of this female-led tradition, conducted largely under-the-radar of the English folk movement in which I came of age. As time goes on I take new photographs of my own, attend troupe practices and events, and even occasionally join in. I spend more than 18 months researching and making work about girls’ morris dancing. I have barely scratched the surface.

Girls’ morris dancing—sometimes described as ‘carnival’ or ‘fluffy’ morris, but known simply as ‘morris’ or ‘troupe’ dancing in the communities of which it is a part—is a highly competitive team formation dance from the Northwest of England and parts of North Wales. Danced primarily by girls and young women, it is characterised by heavily embellished costumes, pom-poms (‘shakers’) and precise, synchronous footwork—the ‘pas de basque’—choreographed to recorded pop music. Performers are organised into ‘lines’ by age and ability, and travel across the region to compete in weekly events as part of  local and cross-county carnival organisations. Troupes devise and polish a single dance per year; selecting new music and creating costumes, drawing on an active network of trainers and supporters. At the end of the season, a championship event crowns each organisation’s Troupe of the Year. The following week, rehearsals begin again from scratch.

In many ways, girls’ morris superficially bears little resemblance to the better-known ‘traditional’ morris performance of the English folk revival. Many first-time witnesses liken it to modern Irish stepdance, or mistake it for the American import, cheerleading, although girls’ morris dancing is (at least) several decades older (Adams and Bettis, 2003). However, despite surface dissimilarities, preliminary research indicates that girls’ morris dancing shares key aspects of its history with other forms of North West morris, with roots in the popular town carnival movement, of the mid-19th to late 20th century, at which troupes of ‘morris dancers’, male and female, single and coed, were a prominent feature. Further dedicated study is required to chart the history of girls’ morris, but my time in the community makes it plain that the performance played an important role in the lives of many girls and women. Frequently passed along matriarchal lines, many of today’s dancers have grandparents, and even great-grandparents who were involved. Others are the first in their families to dance.

Early folk dance scholars were often dismissive of girls’ carnival morris. Morris was historically gendered male (Sharp, 1912: 42) and women’s participation—where it was acknowledged at all—was typically portrayed as a substitution, or borrowing from the men’s dance. Also contributing to the neglect, the traditions of urban dwellers typically received less attention than those of their rural counterparts (Boyes, 1993; Buckland, 1991), as folklore was believed to reside more ‘authentically’ in unindustrialised places (cf. Kennedy, 1966). At the same time, girls’ morris dancing had—and continues to—visibly evolve, Maud Karpeles suggesting that, ‘instead of adhering to the traditional mode of dancing, [girls’ morris troupes] have been tempted to introduce new features and develop the dance on lines that are calculated to win the approbation of the judge and the audience’ (Karpeles, 1930: 5) while Daniel Howison and Bernard Bentley asserted that it had ‘almost entirely lost touch with its traditional roots’ (1960: 44). However, Mike Heaney described it as coherent with any ‘defensible definition’ of folk dancing (Heaney, 2006: 39), while Roy Dommett considered girls’ morris ‘heir to the richest of the English dance traditions’ (1986: 5).

Today, girls’ morris functions at a distance from the morris dancing of the English folk revival; despite performing with an all-female Cotswold Morris side, Waters Green Morris, based in Macclesfield, Cheshire—in the very heart of girls’ morris country—I was previously unaware of this parallel strand of morris performance taking place on my doorstep. It is rarely showcased at folk events or festivals. Similarly, or perhaps for this reason, few of the girls’ morris dancers I have worked with straightforwardly relate to the broader English morris dancing canon, and the performance has continued to grow without recourse to the recurrent cycles of extinction and resurgence more associated with the folk movement.

What then, is the case for reevaluating girls’ morris dancing as an aspect of English folk dance? Well, for me, girls’ morris represents an important space for self-organisation and creativity. It is un-institutionalised—it rarely receives external funding or support—but its participants speak of a a strong sense of community, simultaneously as members of individual troupes and as part of what is colloquially known as the wider ‘carnival world’. It is continually changing to meet the needs of its practitioners. This is key to contemporary folk performance. Not so much a vernacular or style, nor a particular set of songs or dances or other rustic artefact; folk is participatory and dynamic and evolving and it contributes to a vital and lived sense of community and place.

Girls’ morris has a rich past and a vital present that deserves to be better documented, and doing so could help to elucidate the role and nature of folk dance in contemporary England. As the geographer, Tim Edensor notes, ‘the carnival remains an occasion at which normally concealed social tensions are celebrated’ (Edensor, 2002: 84). Perhaps girls’ morris can provide a site through which to re-evaluate the boundaries of morris dancing; one that also enables us to give new meaning to a range of contemporary cultural products—even those not currently or readily recognised as ‘folk’.

Buckland, Theresa. (1991) ‘Institutions and Ideology in the Dissemination of Morris Dances in the Northwest of England,’ Yearbook for Traditional Music, Vol. 23, No. 1, pp.53 – 67.

Sharp, Cecil. (1921, 1978) The Morris Book: With a Description of Dances as Performed by the Morrismen of England, Charles River Books.

Dr Lucy Wright is an artist and ethnomusicologist, currently employed as Research Associate on the AHRC-funded Digital Folk project at the University of Sheffield (www.sheffield.ac.uk/music/staff/academic/lucy-wright). She is interested in contemporary English folk music and dance—in particular in the performance legacy of the town carnival movement in the Northwest of England—and the relationships between performance and material culture. As a dialogical artist, she undertakes occasional artists’ residencies and examples of her practice-based research are available at www.artistic-researcher.co.uk.