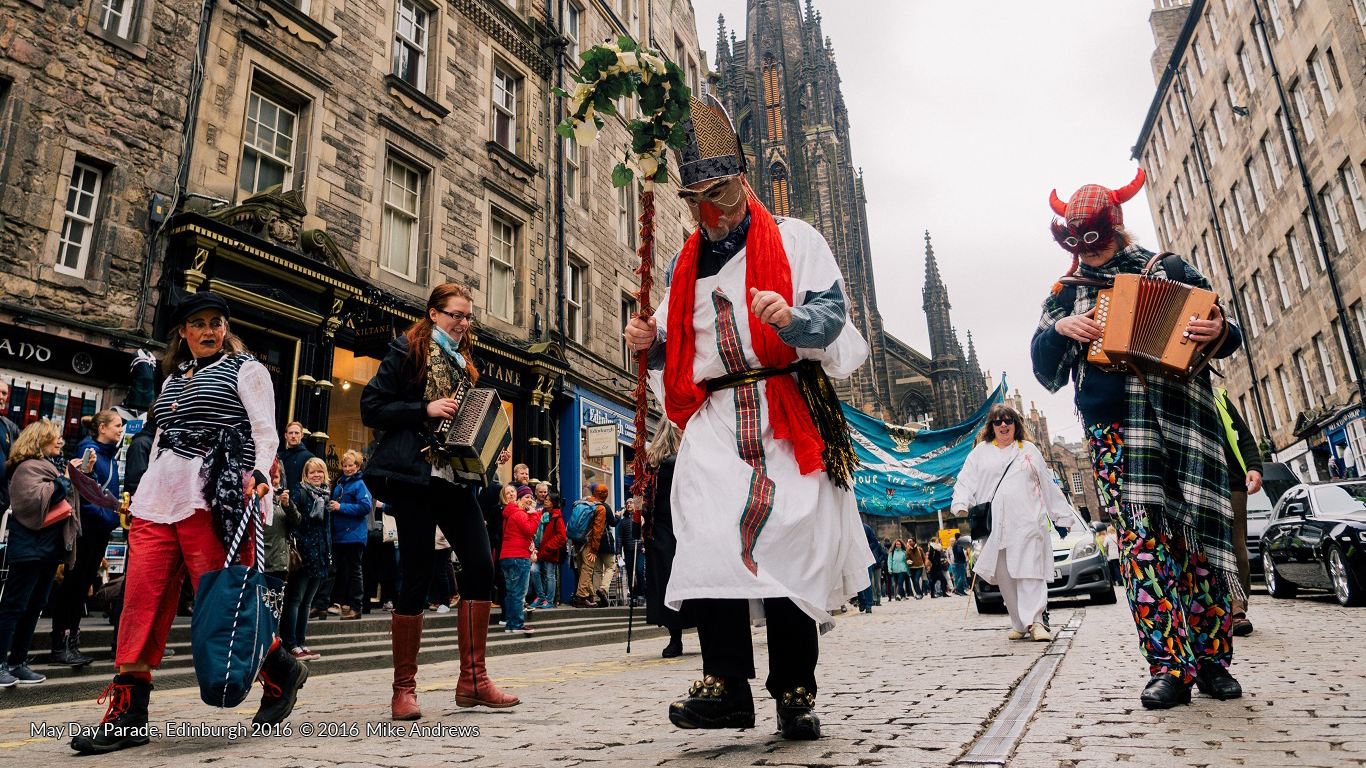 Gaelic hip-hop; beatboxing paired with traditional step dance; Scottish stories mixed with global folktales … The first of two annual festivals run by TRACS (Traditional Arts and Culture Scotland), TradFest Edinburgh • Dùn Èideann is a celebration not only of Scotland’s traditions and heritage, but equally of the ways in which artists and performers continue to reconfigure them for 21st century audiences in innovative and exciting ways.

Taking place from 27 April to 8 May 2016, this was the festival’s third edition and its biggest so far, with 90 events drawing in an overall audience of thousands. The programme was as eclectic as it was vast, featuring an array of traditional storytelling and live music but also talks, workshops, art exhibitions and walking tours, together demonstrating the quality and variety of Scotland’s thriving traditional arts scene.

It was also a truly city-wide event, with events taking place in 25 venues around the Scottish capital. Treasure Troves of Scottish Tradition were uncovered at the National Library of Scotland, which hosted a series of talks focusing on stories and customs from different parts of Scotland, such as industrial working lives in Fife and East Lothian and the musical history of Dumfries & Galloway. Blackwell’s Bookshop hosted various discussions, including a talk on the recent Scottish elections, while other venues in Edinburgh and Leith got involved by hosting gigs and ceilidhs.

Just a few highlights included Canadian old-time trio Sheesham and Lotus & Son and The Men from Leith, a celebration of the community’s rich musical offering with performances from Dick Gaughan, Blue Rose Code and Dean Owens. The Pleasance, known to many as a popular Fringe Festival venue, hosted nightly performances from fantastic acts including local duo Blueflint and the Alan Kelly Gang, one of Ireland’s leading contemporary trad acts. Young trio Talisk also earned four-star reviews from The Times and The Herald, the latter describing their gig as an “exciting, exuberant performance” and an “energy-intense take on tradition”.

Gaelic played an important role in this year’s musical line-up. Acts like Niteworks and duo Alasdair Whyte and Ross Whyte, both of whom combine stirring Gaelic vocals with electro sounds, or Griogair Labhruidh, the country’s first Gaelic rapper, left no doubt that there is a place for older languages in modern music. Scots song was also represented: Siobhan Miller, two-times Scots Singer of the Year at the MG Alba Trad Music Awards, performed a sell-out set at the Scottish Storytelling Centre (supported by Gaelic band Huradal), and Kirsty Law led three workshops on songwriting.

The festival is timed to coincide with the spring celebrations of Beltane, an ancient Gaelic festival, and the Scots celebration of May Day (further information available here). The programme included events celebrating both traditions, including a Family Beltane Day prior to the famous fire festival, and a Mummer’s Ceilidh.

‘We put May Mumming back on the street again this year as part of the May Day procession, and brought the Beltane Fire Society into the wider cultural community,’ says Donald Smith, director of TRACS, who also led a traditional dawn walk up Arthur’s Seat on Sunday 1st May. ‘Bring back Robin Hood and Maid Marion because we’re back in the hands of the Sheriff of Nottingham and his wealthy property-grabbing cronies!’

Folklore, of course, was also in abundance! On the night of Beltane, when the web between the worlds is said to be at its thinnest, stories of fairies were told in both Riders of the Sidhe, told by David Campbell and Linda Williamson, and The Two Truths of Thomas the Rhymer, which featured Scottish and English retellings of the 13th century laird who spent seven years with the Queen of Elfland, returning with the gift of prophecy but an inability to tell a lie. Stories from around Scotland were shared in When Shall We Three Meet Again, while tales of gods and giants from across the globe combined in The Magical Fusion.

Though based in Edinburgh, TradFest’s borders are not limited to Scotland or the UK. To quote one performer, GOL lead singer Roxana Vilk, ‘Tradition for [me] has nothing to do with where you are born and everything to do with what inspires you artistically.’ This year’s programme demonstrated how traditions from different parts of the world can intersect to create new stories, with Kenyan and Brazilian stories blending with Scottish tales, and sounds from Iran, Scandinavia, the Balkans and beyond mixing into the musical offering.

This richness of variety was one of the focal points of the annual TradTalk, a day-long conference that brought together professionals from across the artistic spectrum. Mairi McFadyen, Storytelling Network Coordinator for TRACS, said:

‘In Scotland, the traditional arts are underpinned by the idea of hospitality: sharing what we have together, providing a means for voices from mainstream society to be heard. Storytelling, music, song and dance can play a vital role in promoting understanding between people of different faiths, nationalities and abilities.

But diversity is about so much more than ethnicity or national cultures and exists on infinite scales! The School of Scottish Studies Archives shows us that, even within a country as small as Scotland, the rich diversity of cultural forms even at the very local level is incredible. And rather than talking about ‘promoting diversity’ – which suggests that there is something to be diverse from – we should talk about tolerance, understanding, compassion, imagination and creativity, and from that, everything else follows.’

These values equally inform TRACS’ other festival, the Scottish International Storytelling Festival, which takes place around the time of Beltane’s autumn twin, Samhuinn. SISF is a must for fans of traditional storytelling: an eleven-day celebration of live storytelling, oral traditions and cultural diversity, always with a generous folkloric offering.

Until then, visitors to Edinburgh can visit the Scottish Storytelling Centre, based on the capital’s historic Royal Mile, for regular traditional storytelling events, plus theatre, music, dance and much more. Visit www.tracscotland.org.

Sophie Cameron is Marketing & Communications Development Officer for TRACS (Traditional Arts and Culture Scotland), based in the Scottish Storytelling Centre in Edinburgh. Find her on Twitter at @toomanysophies, and at @TradFestEd.