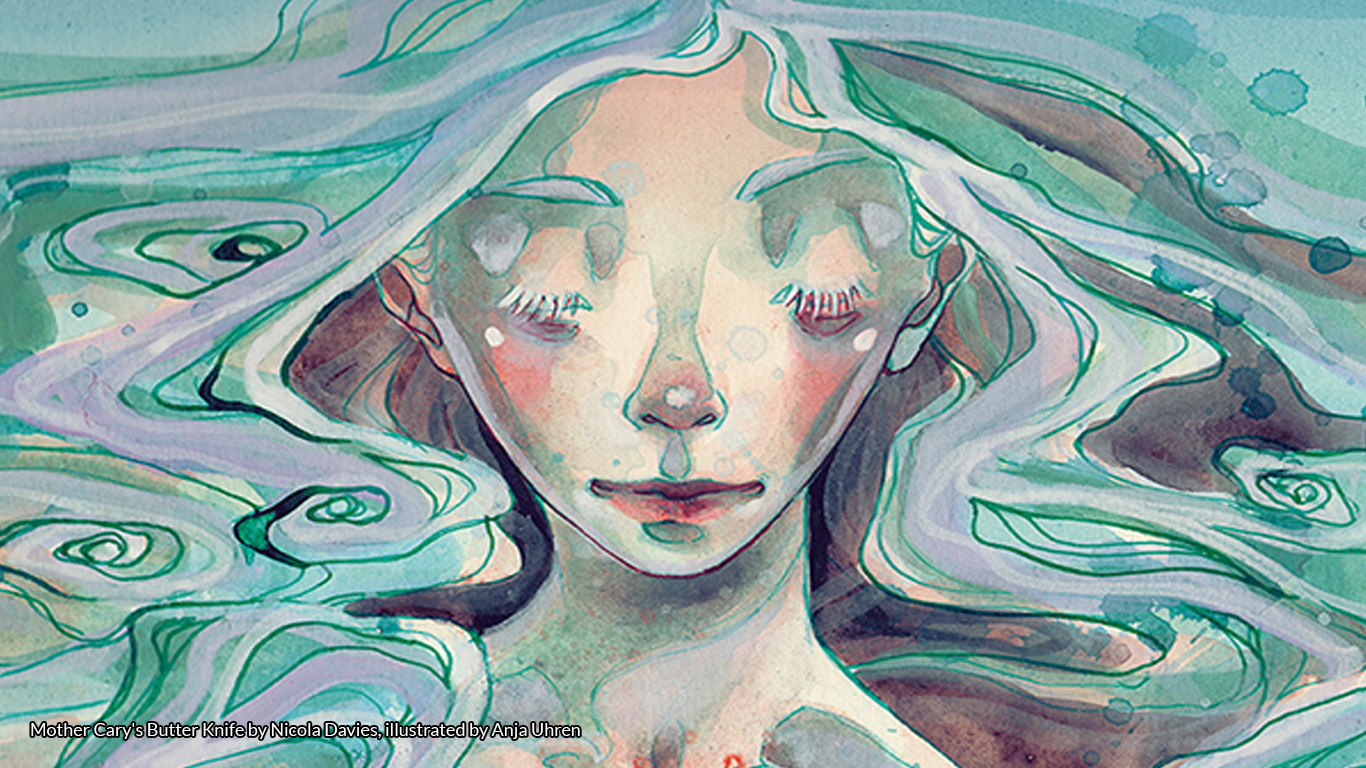 For a writer whose most famous book is about the biology of anifmal faeces, it may seem like quite a stretch to be creating stories with their roots in folktales as I’ve done with the Shadows and Light series for Graffeg. But really, it’s not so far to travel. The natural world has a meaning and significance in our lives that runs beneath the facts. We need nature not simply because it provides the material means for our continued existence – air, water, food – but because, without it, our souls would shrivel. I’ve always known that our relationship with animals and nature has a mythic heart, bound to the deepest and sometimes darkest currents that flow within us, which is why the series is called Shadows and Light.

I was a dreamy, lonesome kid, always wandering about in the garden, in the fields, on the beach, imagining being a bird, a wolf, a wave. So the Shadows and Light stories have been growing in me all my life in a way, dissolved in the liquid of my mind, in between the molecules of imagination. But for a story to really be born, something happens to the external pressure so it comes out of solution and forms as a bubble. The first bubble of Shadows and Light came during a wet holiday on Harris in the Hebrides. I took with me David Thompson’s The People of the Sea – a collection of selkie stories from Scotland and Ireland. I wandered the wide, white beaches between the storms and watched the turquoise sea all that holiday, waiting for a selkie to swim towards me and leave its skin under a stone. But it wasn’t just the seal people themselves that made bubbles begin to form in my mind. It was the atmosphere, structure, and voice of the traditionally told stories. A year or two later I was in Colombia, researching a book about manatees, and I heard stories just like the selkie tales. But there they were told about pink river dolphins, who would change into men and come ashore to father children (always wearing hats to cover their blowhole, the only remnant of their dolphin form). More bubbles gathered.

Still they were too small for me to really pay attention to them, until I was asked to write a story to be told around a campfire. It was to be for young people on a respite weekend, away from their duties taking care of sick or disabled family members. The weekend was in East Anglia, the part of the world where I had grown up. For me, those soft rolling landscapes had always been full of magic. The most magical beasts there were the hares that I had spent hours watching as a child, as they chased and boxed in the spring wheat. So I wrote a dark story about a girl who escapes from violence and grief by transformation, by shape-shifting into a white hare. I used the voice and structure of those traditional stories that I’d unconsciously been stirring into my mind.

It was a completely new way of writing for me, and it was incredibly exciting and liberating. I felt I had finally taken the lid off the pop bottle – I fizzed with bubbles of lots of new stories. Some like Mother Cary’s Butter Knife and The Selkie’s Mate adapted forms of traditional stories I’d read, others were newly distilled from my imagination and the things I’d been putting in there. Elias Martin was one of those. I’d been researching wolverines for a non-fiction book, and for months had been boring my friends and family with wolverine facts and feats.

Finally, on a writing break in Pembrokeshire, with my friend and collaborator Jackie Morris, Elias popped into my mind. His name was always the core of who he was and what the story became. Saying it to myself was like a spell that conjured his life and allowed me to tell it. Just a week ago, a had an email from a child in the USA who had read somewhere about Elias’ impending publication. “I am Elias Martin,” he wrote excitedly.

With Elias Martin, which is very definitely a story from the American north, I realised that as I travel around the world, story bubbles are going to come from everywhere I go. I’ve just finished two new Shadows and Light. One is set in a marshland, and came from time I spent wandering the coastal marshes of Suffolk and Norfolk last year. But the other comes from visits to Muscat in Oman and Khartoum in Sudan, where the sand, wind-carved rock, camels, and the fierce heat and light got inside my head. With this story, the final bubble-forming factor was a photo in National Geographic of a nomadic beekeeper in Yemen, riding his skep-loaded camel down a dry wadi. Fascinated, I read about Yemini beekeepers and their magical honey, traded at special markets where honey from the high, dry mountains fetches the highest prices, and is reputed to have magical properties.

None of these stories would ever have found their way into the world without Graffeg. Writers are type cast, like actors, and these new stories didn’t fit into any of my existing identities as far as my regular publishers were concerned. So I was delighted when Graffeg jumped at the chance to publish them and use them as a means to bring on new talent in illustration, gathered from university courses in Wales and the South West. I’ve been blown away by the diversity of illustrative voices that we’ve found.

Of all the things that I’ve written – and this year my fiftieth book will be published – stories with their feet in traditional story telling are the things I love most. Partly because they speak directly and passionately about the deep importance of the natural world, and partly because I’ve never written anything that has such an impact with live audiences. When I read them, fidgety fourteen-year-olds hold still; people hold their breath to hear what happens next. I’m humbled that, after 20 years of writing, I feel I’ve finally found the true power of story.

The wonderful folks over at Graffeg have offered four, yes FOUR, books from Nicola’s magical Shadows and Light series  for one lucky #FolkloreThursday newsletter subscribers this month!

‘A series of illustrated folk tales for older children. Be ready to feel a little bit of magic, and perhaps a few shivers down the spine.’

A girl who changes into a hare to evade a cruel lover. One in a series of short stories that explore the deeper, darker side of our connection with the natural world. For older children and adults. Inspired by ancient folk tales and a love of nature. Be ready to feel a little bit of magic, and perhaps a few shivers down the spine.

A boy who falls in love with the sea. One in a series of short stories that explore the deeper, darker side of our connection with the natural world. For older children and adults. Inspired by ancient folk tales and a love of nature. Be ready to feel a little bit of magic, and perhaps a few shivers down the spine.

In a land where people flow between ocean and land, a seal and a fisherman sing together under a flowing moon.
A short story for older children which explores the deeper, darker side of our human connection with nature. Inspired by ancient folk tales and a love of nature.

Elias Martin lives a scowling, solitary life for a decade until a small, lost child wanders into his path. One in a series of short stories that explore the deeper, darker side of our connection with the natural world. For older children and adults. Inspired by ancient folk tales and a love of nature. Be ready to feel a little bit of magic, and perhaps a few shivers down the spine.

The books can be purchased by clicking on the images above.

Nicola Davies is an award-winning author, whose many books for children include The Promise (Green Earth Book Award 2015, CILIP Kate Greenaway Medal Shortlist 2015), Tiny (AAAS/Subaru SB&F Prize 2015), A First Book of Nature, Whale Boy (Blue Peter Book Awards Shortlist 2014), and the Heroes of the Wild series (Portsmouth Book Award 2014). She graduated in zoology, studied whales and bats and then worked for the BBC Natural History Unit. Underlying all Nicola’s writing is the belief that a relationship with nature is essential to every human being, and that now, more than ever, we need to renew that relationship. Nicola has published several books with Graffeg including Perfect (CILIP Kate Greenaway Longlist 2017), the Animal Surprises series, the Shadows and Light series, and The Pond, out May 2017. You can follow Nicola on Twitter and visit her website for more information.