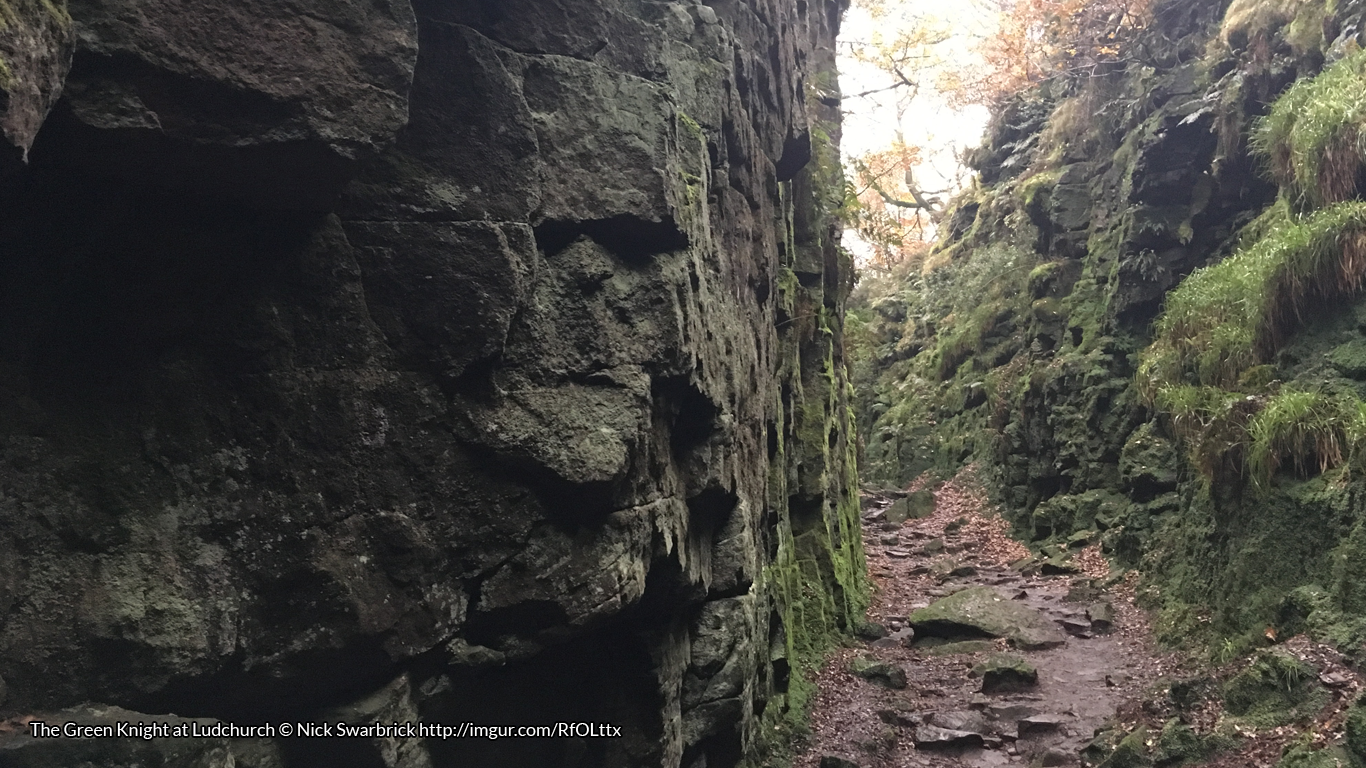 Reading between the lines of landscape, and drinking in a sense of place from the unpicking of a collective memory, be it literary, anthropological, geographical, or our own sensory experiences, is something that has been toyed with for decades. The emotional and spiritual dimension of being in place, in the work of Alan Garner, powerfully reminds us of our connection to, and relationship with, the land and the memories/stories attached to it.

Alan Garner is a prolific writer perhaps best known for his two books The Weirdstone of Brisingamen (1960) and The Moon of Gomrath (1963). These are both magic realism adventures in which two children visit his Cheshire homeland and encounter creatures from British legend. All of his books are either re-presentations of folktales or an unearthing of the mythologies which have collectively been woven into the landscape over the centuries. The commonality throughout is the emotional and spiritual connection that modern peoples have with their past. With a gap of some fifty years, he completed the trilogy in 2012 with Boneland. After reading Garner’s last two novels – Boneland and Thursbitch – we came to the conclusion that the landscape itself is a character. There is something sentient about the physical space; it is as if the elves in the earlier novels and the psychological disturbance of his middle-period fiction are revisited with an almost surgical exploration as he looks at the relationship between spirituality, landscape, and story.

Garner identifies the valley of Thursbitch, below Shining Tor in the Peak District, as a place of presence in which gateposts and stones in the valley align with the hills above in ways that have an astronomical/cultic significance. His exposition of the place in a talk promoting the novel (Garner, 2008) suggests he is drawing on pagan patterns of worship centering on the midsummer solstice, as well as local legends and uncollected folktales which he originally (literally) stumbled upon as a teenager. Garner tells two stories in one: the meditation of the terminally ill Sal in the present era as she walks the valley with her friend Ian, and the lives of the Turner family in the eighteenth century. Thursbitch is a fascinating interplay between Garner’s scholarship and his passionate connection to local people and the landscape he has known all his life.

His depiction of an imagined solstice ritual of bull-sacrifice is Garner at his most terrifying and evocative. The eighteenth century protagonist, John (Jack) Turner, strengthened by community expectation, confronts a bull that is brought to him. Taurus above him in the sky, he is at once Orion and Gilgamesh-Enkidu or Mithras as the people rip the bull apart (and in a Bacchic ecstasy attack Jack): he takes its heart. His pregnant wife – they are married earlier in a folk-rite – sits above it, watching the sacrifice from the safe haven of Thoon, the dwelling of the local demigod or þurs:

Against the moonlight she could not make out the shapes. They were one swarm of noise… Something was in the field. It grew from the mass, and was it, yet made it more, drawing the dark writhing to its own purpose, the yelling to its own tongue. (Garner 2004:59).

In this powerful evocation of group ritual, we witness Garner’s vision: it is not necessarily a comfortable experience, yet it is what ultimately brings peace to both the modern-day and eighteenth century protagonists.

Garner constantly links the past and the present together through story. Whether these are picked from mythology, legend, or folklore will depend on the book you pick up, but the later novels each have something quite profound in common and that is the sense of owning and ‘being owned’  by the landscape. It enters the character rather than the other way around. Boneland delivers the incredible endurance of myth and the importance of having to retell it; to understand it, within the context of the current generation in order to ‘unriddle the world’ (Garner: 56). He sees in the landscape evidence of human (if not pre-human) occupation and considers how these traces link together through story, be it oral, physical (in the way we use the land and stone to record our place in the land), or the written word.

Boneland is a remarkable story in which Colin, the boy from Weirdstone and Gomrath, much like the author, looks to the stars and the stories within their constellations. He sees them as a map of our mythology, in the hope that he will find within them an answer to the mystery of who he is. Morrigan, Gawain, Arthur, Merlin, and the Sleeping Knights are part of Colin’s story and yet, after almost 70 years of research, Garner has found that they are also part of something much older. Boneland, as with all of his books, should not be considered retellings of myths but rather something altogether more revelatory. They are a calling to the numinous resonance of myth and Garner, as a dreamwalker, is constantly seeking to find the merestones which signal us back and forth to a time when our lives and story connected to something greater than the present alone. Written again in a dual narrative context, Boneland presents us with Colin the astronomer-shaman of our time and a Mesolithic hunter-shaman, who are connected through dream and thought.

Alan Garner expects the reader to dig beneath the surface of the words in order to find a sense of ourselves as inheritors, not only of land but of the meaning of land. However, the type of digging that he asks of the reader has changed over time. In his first books, it would simply be a case of reading those legends and folktales associated with Alderley Edge but as he mastered the tools and dug deeper into the local landscape, Garner found connections between myth and landscape and the human condition that had been missing. With the Stone Book quartet, this is explored through family and landscape; in Thursbitch and Boneland this is ritual landscape, and something that goes beyond simple family trees. In a world where so much information is easily accessible, the thing missing is meaning. In Garner’s country, meaning is unearthed through oblique reference to folktale, to the Gawain-poet, and to emotional connection. In order for the reader to find this, an understanding of these physical and literary sources is demanded.
Using themes from myth in a modern context to explore how time and land are related as “the song and the dance” (Garner 2004: 13), our own exploration of the physical landscapes of Thursbitch and Ludchurch – key sites in the eponymous Thursbitch and Boneland – was nine months in preparation. It took in – with the help of a local taxi driver – the principal places in Garner’s writings: Alderley Edge, Jenkin Chapel, and the Goyt Valley. We then went independently to Ludchurch and explored, in very difficult weather, the hidden valley of Thursbitch. Garner’s own vision of the valley is one in which the standing stones, even today, retain memory of a cultic landscape: for him, the “valley of the demon” is a place of dread.

For us, the microclimate of the valley of Thursbitch was instrumental in helping appreciate the numinous presence which dominates the book – it is interesting to note that other visitors (including our taxi driver) had also experienced the danger of the valley through its unpredictable weather. And yet although some places and the stories they hold may contain dark elements, there is a sense of fear in Garner’s books of a different type. It is the fear of us losing touch with the stories that made us who we are and still design us. What will happen to us when we stop looking back; when we can no longer dreamwalk into a history? We are slowly losing sight of the stars in the sky and we wonder whether, when we can see them no more, we lose sight of who we are and have always been: dreamwalkers.

Our initial exploration of the work of Alan Garner grew from our passion for children’s literature and high-quality reading experiences for all. We would urge everyone to read his books because they evoke, with great craftsmanship, a sense of place and time and myth: we hope that this will inspire us all to look closer at the pasts that reside within our own local environments. Garner asks the reader to pay close attention to the relationship between experience of the landscape and a sense of belonging. In his unearthing of the stories and dreams held within his native Cheshire, he has become a custodian of something greater.

Nick Swarbrick leads the teams for the Undergraduate Degrees in the School of Education, teaching on the undergraduate degree in Early Childhood Studies. He has a research and teaching role in children's literature and how young children explore the outdoors environment. Nick holds an Associate Teaching Fellowship at the University. You can follow Nick on Twitter here, or visit his website. Mat Tobin teaches English and Children's Literature in Primary ITE and both the Primary PGCE and the 3-7 Early Years PGCE. He also teaches Early Children's Literature on the undergraduate degree in Early Childhood Studies and leads several modules on the MA/PGCert in Education with a focus on Imagination and Creativity and Children's Reading. You can follow Mat on Twitter.