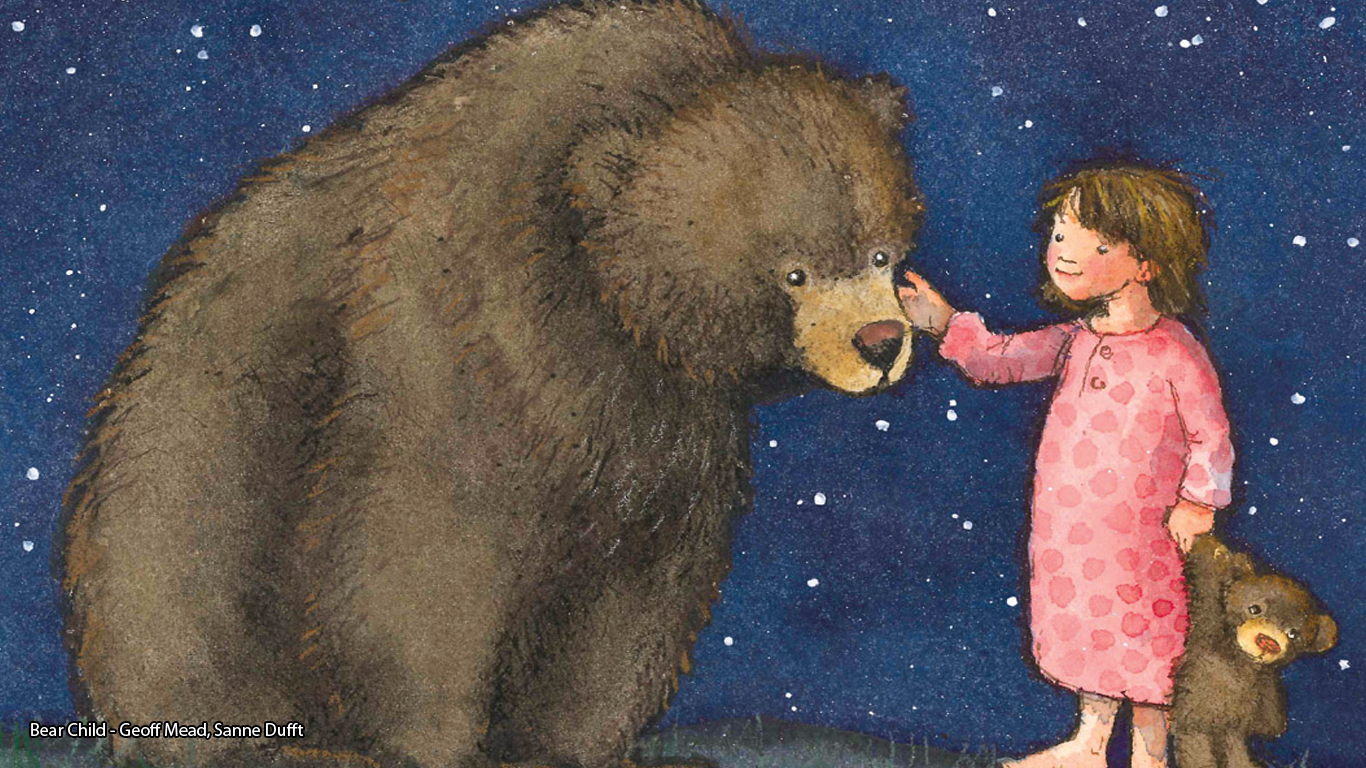 Whenever a bear shows up in a folktale, we know something wonderful, and maybe a bit scary, is about to happen. My favourite such moment happens at the very beginning of a well-known Norwegian tale: The White Bear King Valemon. The king’s youngest daughter is wandering in the forest one day when she sees an enormous white bear lying on his back in a clearing, tossing a golden wreath into the air and catching it. The princess wants that golden treasure more than anything in the world and bargains with the bear. She offers him fine brocades, silks, rubies and diamonds. But he wants something else:

“The price of this wreath is yourself!”

It’s an archetypal meeting between the human and the wild; between beauty and the beast; between the known and the unknown – and it makes the hairs on the back of one’s neck stand up.

Perhaps bears are such powerful characters in myth and folklore because the creatures themselves are wonderful but have a dangerous edge. If you’ve ever been close to a wild bear then you’ll know exactly what I mean. My late wife Chris and I once travelled to Minnesota to spend time with wild black bears in the woods, under the expert guidance of Dr. Lyn Rogers. It is thrilling and very humbling to stand a few feet away from a 650lb male black bear, or a female with her cubs. There is no doubt who is master of the forest and on whose terms you venture there.

Myths and legends about bears abound in every culture that has co-existed with them: from the Inuit in the North to the Ainu in Japan; from West Coast Native Americans to the peoples who once lived in the great pan-European forest. In the animistic worldview of hunter-gatherers – in which all living things are imbued with spirit – bears were respected as powerful, intelligent, curious creatures with almost human qualities.

Sometimes, as in the Japanese story of the Crescent Moon Bear – when the young woman has to steel herself to pluck a whisker from the bear’s neck – it is the dangerous ‘otherness’ of the bear that is figural. It’s a testament to the elemental character of the bear that the outcome is in doubt every time the story is told. Even the nursery tale of Goldilocks relies on the potential threat of the three bears to make it exciting: will she get caught or won’t she?

In all of these tales, what really fascinates us is the relationship between humans and bears. In The White Bear King Valemon (and other stories such as the Polish tale of The Bear in the Forest Hut or the Irish tale of The Brown Bear of Norway) human and bear have become one and the same. A king or prince is trapped in the body of a bear, meets his true love, but flees until she can find and release him from the spell. The bear in these stories perhaps represents a certain wildness that only love can tame. One might think that the plot is a bit hackneyed but it’s still the mainstay of a thousand Mills and Boon romances and Hollywood rom-coms.

Then there are stories somewhat closer to nature, in which actual bears and humans get together. I’m thinking of the many indigenous variants of The Bear Wife, in which a young woman gets lost or separated from her human companions and is found by a bear, with whom she ends up living and having children. Eventually the bear is killed, and the woman returns with her children to teach their people the bear-like knowledge of the wild and the skills they need to prosper in the hunt. Such stories reflected and helped to sustain those societies’ inherent participation in the more-than-human world.

Of course, when bears and humans have children, they are bound to be extraordinary and this theme is picked up in legends of The Bear Son. These offspring have amazing adventures involving trials of strength and they often bring back treasure from deep underground, perhaps reflecting the bear’s habit of hibernation in dens and caves. I came across one such version: Jean de L’Ours, in the French Pyrenees, an almost exact parallel to the Spanish Juan del Oso from New Mexico.

This is the theme I drew on when writing the story of Bear Child as a gift for my late wife, to honour her lifelong fascination with bears. The book tells the story of Ursula, a young girl who thinks she might be a descendant of the bear folk: shape-shifters born from the ancient marriage of bears and humans. Bears and bear-like characters in traditional stories are almost always male, but in a more gender-fluid age I thought we should celebrate the fact that women and girls also have bear-like qualities.

Today, our mythic association with bears still shows up in the English language despite the fact that native British bears became extinct 1,000 years ago: we bear heavy burdens, we bear down (and up), we bear in mind, we even bear children! Bears have shared our world since our earliest ancestors encountered the cave bear and even now, their power and mystery live on in our stories and imaginations.

Win a copy of Bear Child by Geoff Mead, illustrated by Sanne Dufft

The amazing team over at Floris Books have offered a copy of Geoff’s enchanting children’s tale, Bear Child, for a lucky #FolkloreThursday newsletter subscriber this month, and another as a gift for one of our kind Patrons*!

‘Now that people live in towns and bears live in the woods, have you ever wondered what happened to the bear folk?’ At bedtime Ursula asks Daddy to tell her the tale of the bear folk: special beings who can choose to be either a bear or a person, depending if they want to catch a fish or read a book. Bear folk live extraordinary lives, he tells her. They are strong and clever, kind and loving, adventurous and creative — just like her. Will I ever meet one?, Ursula asks. Perhaps she already has… Bear Child is an inspirational story of parental love, belief and embracing individuality. This beautiful picture book weaves together Geoff Mead’s charming words with Sanne Dufft’s ethereal illustrations to create a truly timeless folktale.’

Sign up for the #FolkloreThursday newsletter to enter (valid August2018; UK & ROI only).

Geoff Mead is the author of Bear Child, an inspirational story of parental love, belief and embracing individuality. This beautiful picture book weaves together Geoff’s charming words with Sanne Dufft's ethereal illustrations to create a truly timeless folktale. Visit his website here or on Twitter.