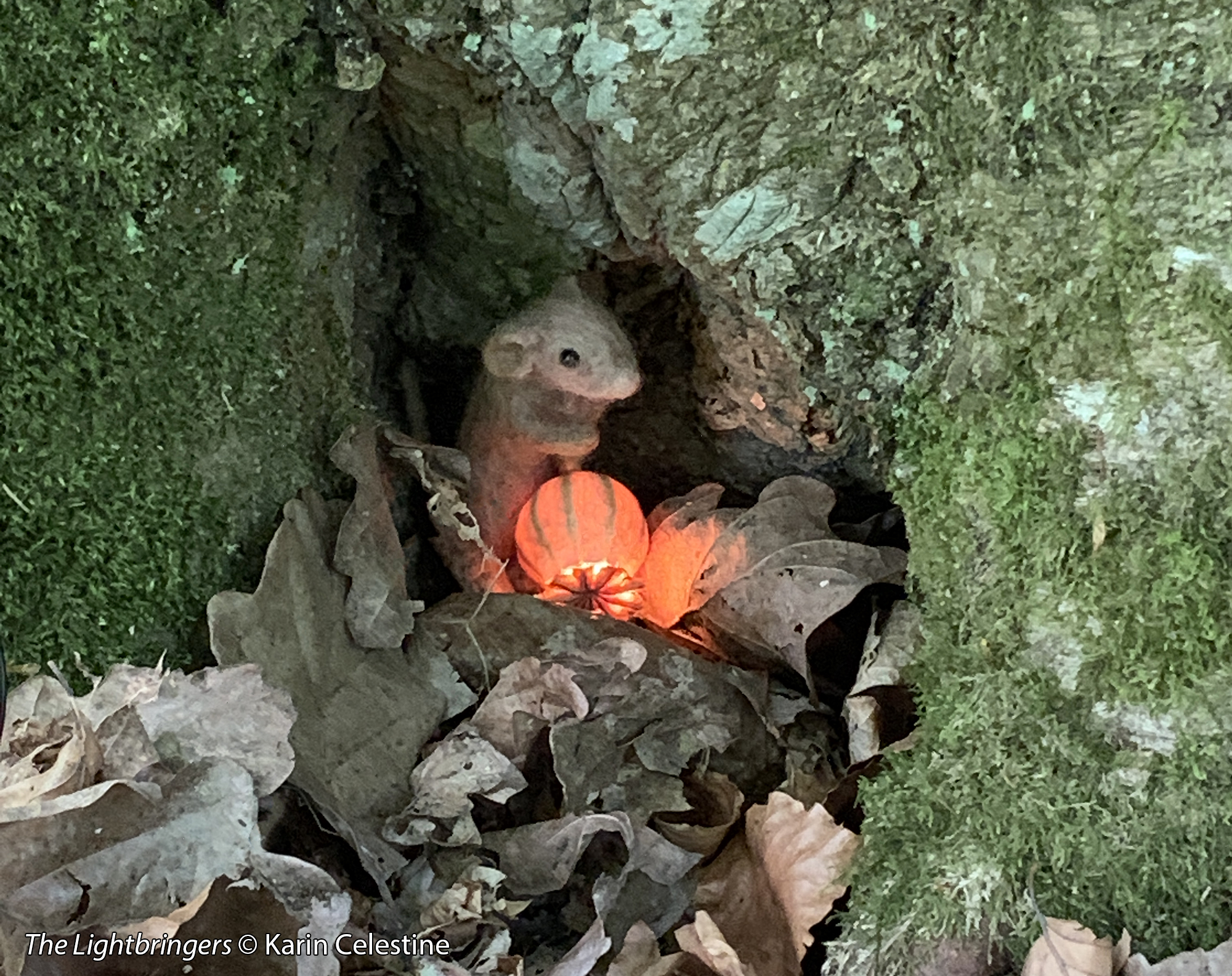 I grew up with a mix of cultures and heritages, in a sort of liminal land between Sweden, Scotland and India. And I was sure that I was a hulder type creature; I used to look for my tail, certain I should have one. In my world, trees turned into trolls at night, tomten lived on the lands and would, like hobs, help us if we cared for them. I put porridge out for tomte on Christmas eve and spent my childhood knowing there are small creatures busy doing their own thing parallel to our lives, and most don’t notice them. I always looked for them. As an adult now my world is still full of creatures just out of sight … but if we are still and quiet and know when and where to look, we might catch a glimpse.

At this time of year, when the light fades early and the world shifts from green to gold, cinnamon and fiery red, our old human fears of the approaching period darkness return. In cultures across the world we find mid-autumn lantern festivals, from Martinmas in the old European Christian calendar, to Diwali in India and the glorious Chinese Mooncake festival. We have a universal human need to hold the light and know that we can keep it safe. Our own era seems to be defined by a storm of global crises: environmental, political and now biological. A revival, or perhaps just a joyous reminder, of our human desire to create light and keep it close and safe, feels even more important now.

This is what The Lightbringers is about – it is the first in a new series which retells those old tales of our turning year. This is a story of change; the reigns of the Holly King and the Oak King, and the creatures who secret away the light and keep it safe until the midwinter solstice. The book also carries the message that we need darkness. Light needs darkness to shine. We need rest, recuperation. The wisdom of the earth is one we can learn from. We are on a busy, noisy fast track. Doing nothing is frowned upon, but we all need rest, time to pause, like the seeds in the earth, darkness and rest before we dance again. Central heating and lighting mean we keep going all year round but our bodies often yearn for the hygge of autumn, cuddled up by the fire.

We are well aware that we are on the brink of losing the language of the natural world; the success of The Lost Words by Jackie Morris and Robert Macfarlane last year highlighted just how many children and adults don’t know what acorns and kingfishers are. But we are also losing ancient knowledge of the natural world – the markers of the turning year are easy to miss when your social and work life requires us to dwell so much away from nature. However, nature has a way of bringing us back: in lockdown many enjoyed or even just noticed nature again – we all talked of hearing the birds singing and we reconnected with those creatures. I found it reassuring that whatever else was happening in the world, the flowers grew, berries ripened, fruit fell from the trees and the light grew brighter and warmer and now it is becoming dark again.

However, I found my artificial modern year-markers had gone: events I would do are now no longer happening; visits to my family in Sweden have gone. How do I know where I am in the year when I haven’t been to Sweden yet?

When our usual bookmarks have gone, perhaps the turning of the year and marking the seasons can give us stability and hope whatever else happens.

The story of The Lightbringers was originally written as a short, one-page piece for a gift card – but the interest in it was extensive. People bought it to use for readings at birth celebrations, weddings and funerals. It has even been tucked into a coffin. Children loved it and found comfort and warmth in it, but mostly it was adults who rushed to it and bought copies to give to their friends and relations. It was clear that this was not really in the territory of a ‘children’s book’ – its appeal was far broader than that. When I expanded the story for this book, I wanted to emphasise the folklore elements of the year turning, and to place it in the season and clearly in the landscape. The language I use is full of names – a birch or alder rather than just tree. To name something is to see it. Speak it. Remember it. I wanted to mention midsummer, autumn and harvest loaves, the midwinter solstice and some of the traditions that exist particularly round the part of Wales where I now live; in particular, The Mari Lwyd tradition and wassailing which are still very much thriving today.

Pages 46 and 47 from The Lightbringers @ Karin Celestine

I love the old celebrations and folklore, though so many are being lost and forgotten. How many of us now bake a Lammas loaf? Or know what that timelessly terrifying ribbon-adorned and shrouded horse skull, the Mari Lwyd is about?  Or know not to eat blackberries after Michaelmas? The earth writes her own stories for those quiet of heart to hear. These ancient tales mark the turning of the year and have a wisdom still relevant. No matter what else happens, the days grow darker and then the sun returns again. Flowers blossom and harvests are gathered in. Like our oldest stories, our folk traditions have a way of keeping their meaning and importance however much the world changes; traditions that evolved in a pre-industrial and probably even a pre-scientific world, still speak to us in the digital era. So let yourself be taken in by the darkness, and travel with The Lightbringers as the seasons turn again.

Karin Celestine lives in a small house in Monmouth, Wales. In her garden there is a shed and in that shed is another world. The world of Celestine and the Hare. It is a place where kindness, mischief and beauty help people find the magic in the ordinary. Karin is an artist and author, who creates needle felted animals of charm and character, including the stars of her own delightful stop-motion animations and her series of children’s books published with Graffeg. Her joy in the world of nature is also reflected in her sculptural copper pieces which complement her feltwork. Karin runs popular needle felting workshops, inspiring others to find their creative spirit. Follow her on Twitter or visit her website. The Lightbringers can be purchased here.