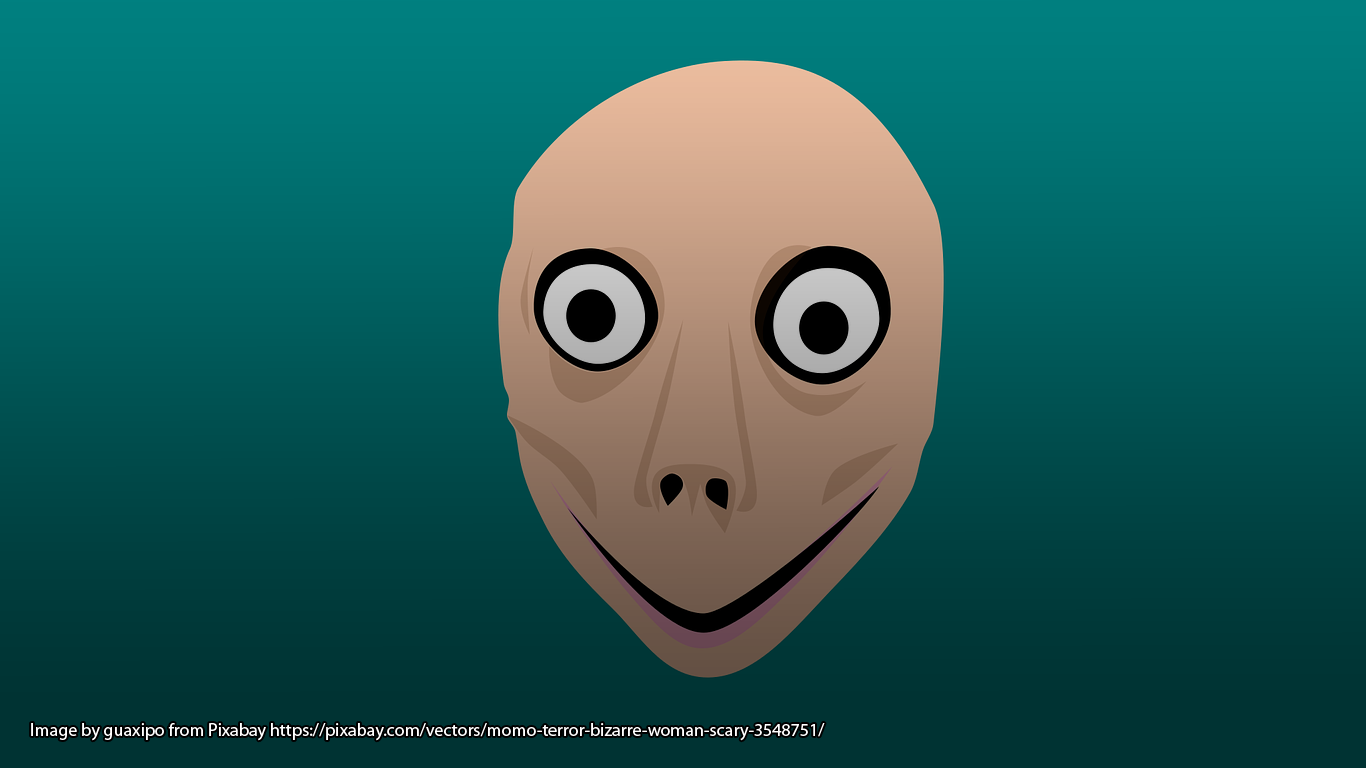 The image is downright disturbing, a young woman with dark hair, bulging eyes, and a chilling smile. She stares out at you and causes you to….die?

Well, not exactly. The image, which has been linked to what’s known as the Momo Challenge or Momo game, gained popularity in both 2018 and 2019 although the original statue was created in 2016 by Japanese artist Keisuke Aiso (Aisawa) and displayed at the Vanilla Gallery in Tokyo, Japan the same year.[i] The image and its association with WhatsApp lead to rumors that children were getting messages and images from a mysterious number that was causing seizures, insanity, and/or death by suicide. Posts about the Momo Challenge reached peaks in both 2018 and 2019 and was often compared to the Blue Whale Challenge, in that both resulted in death by suicide by the time the individual got to the end of the “game.” Momo likely received more fame because Kim Kardashian tweeted a warning about it on February 26, 2019.

According to the legend, one could either contact or be contacted by “Momo,” who would issue an increasing set of tasks to complete, from something as innocuous as watching a scary movie, to self-harm, supposedly ending in death by suicide. Failure to do so would result in threats to the individual or their loved ones, sometimes accompanied by gory or disturbing images. In 2019, this legend escalated when claims were made that YouTube videos enticed children to look into the Momo Challenge, most popularly inserted into Peppa Pig and Fortnite videos. These claims gained popularity when they were repeated by the group National Safety Online and repeated by other agencies, such as police and other safety groups. Perhaps the most disturbing parts of the story came from claims that the Momo Challenge was causing deaths by suicides, reported in places such as India and Buenos Aires most commonly, although none of these reports were ever confirmed.

The idea that something on the internet could lead children to die by suicide is not new. Long before the Momo Challenge, everything from Dungeons and Dragons to music was going to cause children to go insane, worship Satan, or die. Every year, especially around Halloween, we hear warnings about people giving out tainted candy, marijuana edibles, stickers contaminated with acid or other drugs, or razor blades in apples. Clearly these legends demonstrate fears of what can happen to children when they are out in the world, away from our close attention. They are also excellent examples of the intersection of folklore and popular culture, demonstrating how they constantly feed off each other, creating new fears and reintroducing old ones.

Folklore and popular culture are obviously not the same thing, although they often intersect and are more closely related than they are different which means they should be considered as a part of a larger collection of texts by a variety of groups using a range of types of media.[ii] [iii] Folklore, with its focus on variation, repetition, and transmission, clearly differs from popular culture, which focuses on fixed texts. Nevertheless, the two genres borrow from each other, thus perpetuating a great deal of exchange. Folklorist Paul Smith notes that “in the real world, not just a single oral medium of transmission is utilized to communicate folklore, but any available and relevant media is employed.”[iv] Dégh and Vázsonyi also observe that it is impossible to find the origins of legends and that it can be difficult to comprehend the intersections between legends and the mass media.[v] Similarly, Diane Goldstein states, “Intricately woven together, popular culture uses folklore continuously to tap into traditional cultural values and to satisfy audience expectations. But just as popular culture appropriates folklore, folklore too appropriates popular culture.”[vi] So multiple forms of media, popular culture, and folklore combine to reinforce older beliefs and traditions or establish new ones.

Popular culture texts, such as movies, television shows, and other forms of media, clearly reflect belief traditions,[vii] both informing and replicating what concerns and fears are currently relevant. Those who engage with popular culture are not passive recipients of culture; participants discuss, joke, create memes, write fan fiction, and engage in a variety of activities that demonstrate their involvement. Those who create movies, television shows, and other forms of media certainly pay attention to these creations and often respond to fans in social media and through the creation of new texts. Fans can influence storylines, keep television shows on the air, or even cause television shows to come back into production.[viii] Fortunately, folklore scholars have been long aware of these trends (and their precedents) and have been studying these interactions for years, challenging the “notion that folk belief expressed in popular or commodified culture is any less serious, any less important, any less rational, or any less a belief than what is expressed more traditionally.”[ix]

So, when a celebrity tweets about Momo, believing it to be a real threat, the lines between folklore and popular culture become even more blurry. When we learn more about the artist and how he was influenced by Japanese folklore, we can see how his art both came from folklore and became a new type of folklore. When we look at precedents in Halloween traditions, including threats to children, we can see another connection. When reports which look like them come from official sources[x] warn us about these things, we see another intersection of popular culture and folklore. When we read news stories warning parents about these challenges and see friends and family spread warnings online about Momo, Blue Whale, or tainted Halloween candy, we again see that intersection between legend and media and folklore and popular culture.

[x] Additionally, the Internet incorporates folk culture with popular culture at both the official and unofficial levels (Howard 2008, 194), and the vernacular cannot exist without (and feeds on the power of) the official (Howard 2015). We also see the combination of public and private space, where an individual may post with different privacy settings on a single platform, have multiple accounts, and simultaneously manage both a public and private persona online. Additionally, certain spaces can become communal and have their own communal authority, which allows for the constant generation of shared meaning. This is distinct from a static text (Howard 2008, 199).