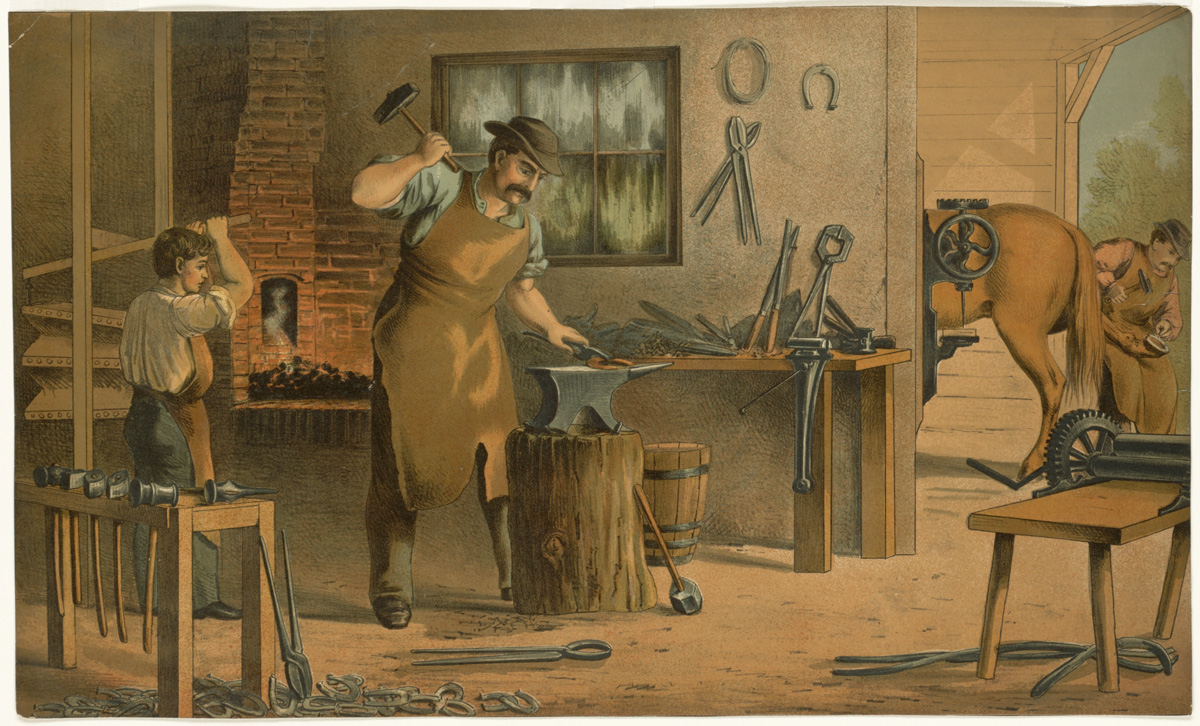 While less well known than their priestly counterparts, German folklore also had plenty of “secular” exorcists who resorted to magic to drive unruly ghosts away.  The following tale from Mecklenburg-Vorpommern has a closer look at this profession, along with its associated hazards.

More than eighty years ago a field medic named Andres lived in my old house. This man must have committed a very serious sin in his life, for he found no rest in his grave. Soon after he was buried, people started saying “Andres is haunting this place”. In particular, he caused lots of trouble in his former residence by pranking the inhabitants in the evenings and at night, frightening them with loud thumps, and otherwise becoming a major pest. But he was also spotted in other houses and likewise became a nuisance there.

At this time a smith named Jost lived in Penzlin. He had a stable on the outskirts of the town, beyond the gate where the Mühlenstraße street is located now. In this stable he kept his supply of black coal, and he fetched them with a sack whenever he needed more. One time when he arrived as usual he was startled to discover Andres sitting on the coals, appearing just as he did when alive, and sneering at him. Jost attempted to beat him and drive him away, but this was futile as he was unable to hit him. And as soon as the poor smith had lifted his heavy sack on his shoulders, the former medic perched down on top of it and increased the already heavy load to such a degree that the poor man was unable to carry it away and had to throw it back on the ground. This was all the troublesome ghost had wanted, and as soon as this was accomplished he stepped down from the sack and stood next to the smith, made faces and struck out his tongue without bothering to evade the angry but futile strikes of the smith. But as soon as Jost shouldered his coals again, Andres returned to his previous seat, and thus the torture continued until the poor victim had finally carried his sack home with tremendous efforts. This bullying continued on a regular basis whenever Jost wanted to fetch coals so that the poor man started to shiver and hesitate whenever he thought of going to his coal deposit. Furthermore, Jost was hardly the only one suffering like this; Andres went after almost everyone with his stupid pranks.

Around this time there was a wood turner’s journeyman working in the area. He was reputed to be far-traveled and trained in the black arts. He also owned a black wooden hand and was able to capture and exorcise ghosts with it. However, this man received requests for help so frequently that he was hardly able to sleep in his bed but had to spend night after night capturing and banishing ghosts. This became too much for him and thus he packed his backpack and travelled onwards. But before he left, he had taught the bloodletter Peter some of the details of his arts. He formally instructed Peter in exorcism and left him a black wooden hand for this purpose.

Thus, it was Peter who was called for help when the haunting became such a nuisance that it began to bother more than one victim. Peter didn’t have to be asked twice but immediately appeared at the right time armed with his black hand and with a sack for imprisoning the ghost. This was a weapon that was dangerous for the ghost. All resistance was futile, and it had to go into the sack. Delighted about his successful capture, Peter closed the sack tightly and walked with him out of the city so that he could assign a new residence to his captive in a region that was as remote as possible. In the beginning the captive in the sack suffered this in silence, but when the heard the whispering of the water and realized that they were near the small mill, he wanted to be carried no further and made himself so heavy that Peter had to throw him on the ground. But Peter was not amused. He worked the recalcitrant ghost over with his black hand until the latter cried out in pain and begged for mercy. He merely asked that Peter tell him where he wanted to carry him. “To the Burbrook meadow” was the reply. “To the Burbrook?” cried the prisoner full of fear. “There are already three priests there from old times! I won’t be able to get along with them, and then I will suffer. Take me wherever you want, just not there!” “Well, if you insist you can go to the Soltborn hill” the exorcist replied, and as the field medic was satisfied with this, he loaded him up and walked onward.

Once they had reached the Grapenwerder Bridge, Andres once more made himself heavy. This enraged Peter considerably. Immediately, he threw down the sack with its content and once more worked over the field medic with his black hand. But the latter spotted a small opening in the sack that had appeared during the fight, and immediately he fled into the outside world and hid under the bridge, leaving the exasperated Peter behind. Peter could have recaptured the escapee, but he was too exhausted. For it was already evening, and he was tired from carrying and fighting the field medic. Thus he limited himself to assign the unruly ghost to the bridge and bind him there. Then he returned to the city, but threatened Andres that he would come back and bind him to an even more lonely place if he dared to play his pranks here as well.

In the city people now had peace from the field medic, but the hauntings were much worse at the bridge. Andres let nobody pass easily, and soon there were loud complaints about him from every side. He frightened the horses of one person and with another he got their cart stuck. In other incidents he threw rocks at passers-by, tore at their hair, sat on their backs, and displayed similar outrageous behaviours.

Once Peter and his son also rode this way because he wanted to take the horses out to graze. As he rode along the road without a care and stepped into the banishment circle, the embittered ghost jumped him and harried him greatly. Peter jumped down the horse in order to defend himself as well as he was able, but he didn’t have his black hand with him and thus the ghost was too strong for him. It wasn’t long until the ghost had dragged his enemy into the ditch, and now he made a serious effort to push him into the soft mud and suffocate him. Peter was now in no little danger and thus called to his son: “Leave the horses alone, and hit the bastard in the head!” His son didn’t have to be asked twice and immediately started swinging a stick. He did hit with the stick, but unfortunately not the ghost but his father’s head. The poor man was close to defeat and he was barely able to shout to his son: “Stop the swinging boy, you are going to kill me otherwise!” In this way Peter and Andres wrestled with each other for a long time. Finally, Peter was able to escape. He ran home and soon returned with the black hand and a sack. Now the barber was forced to surrender, but there was no longer any possibility of mercy. No matter how much he writhed and protested, he had to go into the sack. When Peter had finally exhausted his desire for vengeance, he put the sack on his back and carried his prisoner to the Soltborn hill. There he created a new circle which Andres was not allowed to ever leave, and as far as anyone knows never has.

Only once did people hear from Andres again, when the bloodletter Kunz got too close to him while chopping trees and bushes. For Kunz owned a piece of land on the Soltborn hill which he had recently bought, and in contrast to his predecessor he intended to make use of every square foot of land. For the latter had never farmed many niches and corners of the land, including the piece that was adjacent to the Soltborn. As Kunz reached this location, which was partially within the banishment circle, the barber did not want him to continue clearing the land. As no amount of pleading helped, Kunz threw his hatchet at his opponent in order to get him out of the way. But this did not help. For once he never hit, no matter how often he threw his hatchet. For another he always fell on his back after each throw. Thus, he finally had to give up clearing the land at this spot.

Here we have seen how German folklore approaches exorcism – the ghosts of the sinful cannot really be banished from Earth by mortal magics, but instead must be relocated to a remote area where they cannot bother anyone. Which the bloodletter accomplishes after a false start, but you get the impression that this approach has been used for quite some time – filling the entire German countryside with hazardous ectoplasmatic waste…

Jürgen Hubert has a diploma in physics and a PhD in Computational Materials Engineering, neither of which gets much of a use in his current day job as a project manager for SCADA systems for power grids. His love of the fantastic has long found an outlet in tabletop role-playing games, but he has also long been fascinated of the many obscure local legends told all across Germany. He has recently started a Patreon campaign entitled "Sunken Castles, Evil Poodles" where he publishes new English-language translations of such tales every week in the hopes of funding editing and illustration for a future ebook of the same name featuring these tales, which should be out in the summer of 2020.