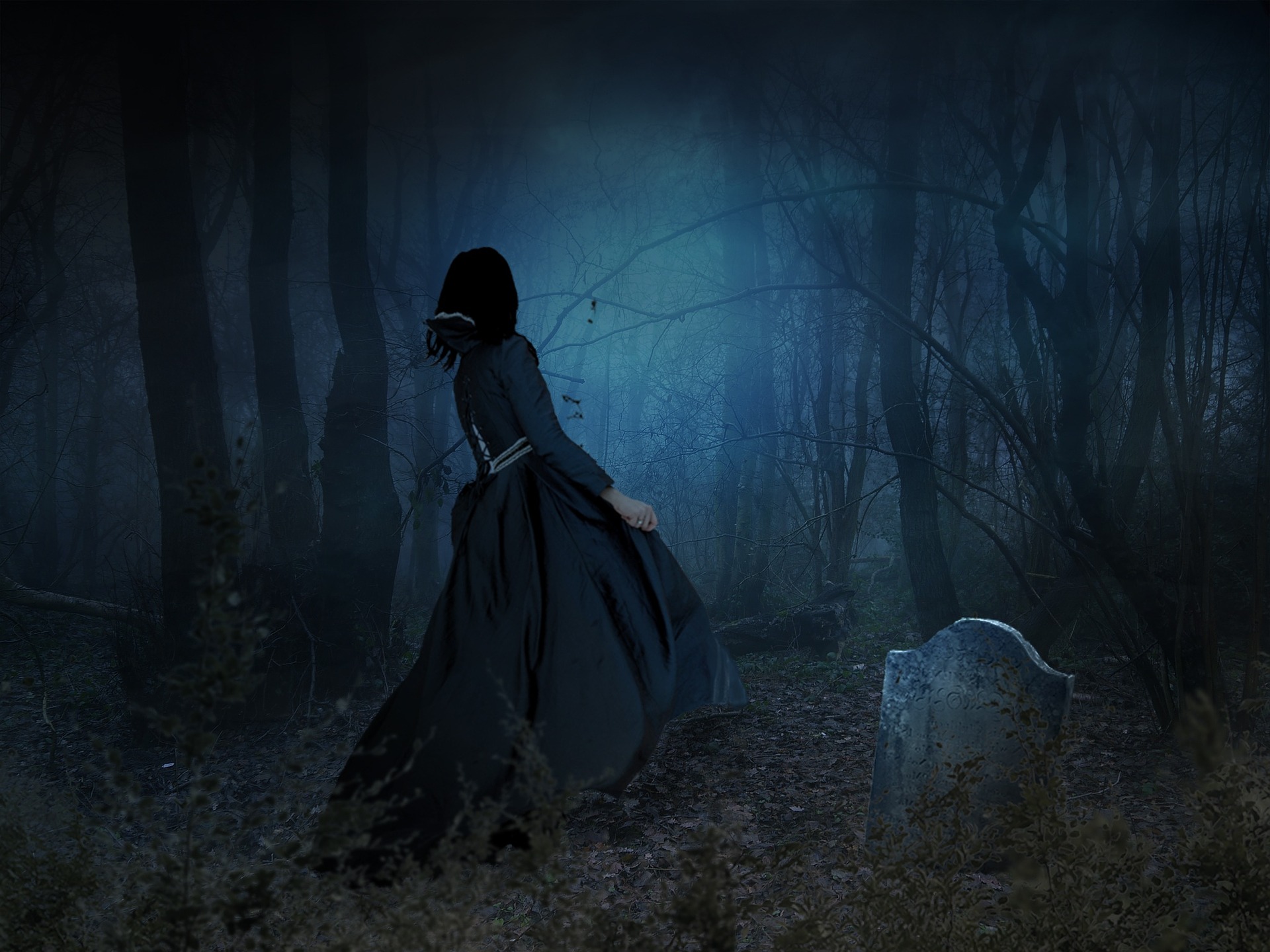 ‘Have you ever heard the term ‘folk horror’ before?’ I asked a colleague of mine: a classics professor. ‘In particular, when describing drama?’ We were sitting in the university café drinking tea and avoiding our work.

‘I remember reading something about it in The Guardian once,’ he said, searching his teacup for memories. ‘Something to do with our dark histories still hidden in the landscape; perhaps archaic traditions threatening the modern world: am I right?’

‘Those are elements of it,’ I said. ‘But it’s more than that, I feel. It’s hard to define. An odd little word.’

‘A compound adjective,’ my friend proudly stated. ‘Break it up. Consider the composite parts. How do they work alone? Then rejoin them. See how they work together. You’re a folklorist; the first half should be easy. Come to that later. Horror in narrative stems from tragedy. Start there. Define tragedy’s dramatic narrative purpose, then define folk horror from your understanding as a folklorist.’

I promised to give the idea some thought and our conversation moved on.

That night in my cottage, with wine instead of tea, I pondered dramatic purpose, tragic narratives, and the nature of horror in fiction.

The purpose of drama, in its most rudimentary form, is an invitation to observe a protagonist undergo challenge and change. In tragedy, this challenge is often one they did not elect to undertake. Protagonists in tragedy find themselves battling against a worldview that has turned against their previous understanding. They are powerless against it, having no tools of battle other than their strength of will.

Unlike romantic drama – in its truest essence, not mistaken for stories of love – there is no deus ex machina, no wise tutor, and no fairy godmother to help the protagonist prevail. They remain alone throughout their ordeal. The world has turned against them with aggression and, in doing so, will prove the protagonist unfit to face the challenges fate has dealt them.

That is not to say, though, that the protagonist is void of merit, for such a character would not be fit for dramatic purpose. We the readers must find them sympathetic, for we the readers, in suspending our disbelief, follow their journey as if it were our own: the unwritten alliance of the writer and the reader. We observe our protagonist’s strength coming instead from their defiant resistance to dramatic aggression, regardless of their doom. In this emerging strength, we find our journey-of-lessons as learned through the protagonist.

If the protagonist does not change their understanding of the world, if they do not try to use their willpower to resist, then there is no drama. There is no story. All drama is conflict.

Ultimately, in tragedy, despite what the protagonist has learned, their failure remains imminent; but we, the readers, have also learned from the protagonist’s will to resist. Even their final failing offers us lessons we must apply to our lives, because we live on beyond the arc of the drama. We can still change.

How we react to this final truth – how we respond to the purpose of the drama – will be unique to us all. And it is essential to us all that we the readers keep the momentum of change going, acting on the lessons learned. Unlike the failed protagonist, we retain our potential for change.

The purpose of tragedy, like belief in magic, religion, and science – a trinity begetting itself – is to inspire cathartic awe. It invokes the need to learn better who we are, and recognise how we might change our life and our world for the better.

Approving of these initial thoughts, I poured some more wine. And turning my thoughts to folklore, I thought of how folklore and tragedy might combine to make folk horror.

Folklore means the wisdom of the common people; wisdom handed down by the common people throughout history. This is important to understand as tragedy (and thus horror) focuses on the people involved in plot and setting, not the other way around. It is the people – the protagonist and antagonist/antithesis – who are important. They tell the story. They are the story.

A film about witch hunts, regardless of plot and setting, does not need witchcraft to tell a story. The most important element is that the story concerns a society that believes in witchcraft.

A rural landscape might be a simple signifier for a place of bygone times, but it is not essential, as it is the archaic beliefs that are far more important in studying character.

Furthermore, horror narratives told in rural settings are not always folk horror, for in folk horror the word ‘folk’ is key; it is horror of the people, stemming from folklore. It is old wisdom seen with modern eyes as archaic.

The histories of cities such as Edinburgh, York, and London are brimming with folklore. A rural setting is not essential to the folk horror narrative. It is the traditional folk wisdom that is key, the wisdom of the common people: the folklore. The folk horror narrative begins when this old wisdom meets with new knowledge and disagrees. Drama is conflict.

Narrative is first and foremost for we the reader. We suspend our beliefs to the story, seeking to become one with the protagonist, to go through their drama, experiencing it ourselves. The folk horror narrative takes the reader away from the modern world, either by setting the story in the past, or by unfolding the protagonist’s tragic journey in a sub-reality based on archaic traditions, or morals out of place with the contemporary conscience.

In each case, both the historical and the modern setting, we the reader follow a protagonist transcending their former reality into a world at odds with their/our understanding. We journey with them through a familiar yet uncanny setting, following their story towards its tragic end.

In the tragic journey through a sub-reality based on archaic traditions and outdated morals, the nature of the conflict is viewed from the perspective of the protagonist as the outsider.

In the historical narrative where the archaic traditions are viewed through the contemporary eyes of we the reader, we view the conflict as being at odds with our contemporary beliefs.

In each tragedy, though, both reader and protagonist cannot comprehend the new worldview they face, and no matter how the protagonist strives to survive their tragic fate leads only to death.

Common identifying elements of folk horror narratives are often rural settings, dark magic, the occult, a fear of the ‘old ways’, and ‘the unknown.’ But to reiterate, this is only the setting where the drama of the people – of the folk – takes place.

Folk horror, when understood through its roots in tragedy, is a horror of the psyche. It has no need for blood, and gore, and ghosts, and demons. Its horror is tangible, and thus far more terrifying than any supernatural malevolence or violence. The fear of being ‘other’ conjures up the psychological demons of depression and anxiety: feeling alone, helpless, and isolated within a loveless crowd.

Wisdom and anti-wisdom, the rational and the irrational, these themes catalyse the dramatic conflict in folk horror. This might go some way towards explaining the seemingly anachronistic societies found in rural settings; but also, it poses the question: Is their archaic nature symptomatic of their irrationality?

The frequent rural settings being located so close to where we, the readers, might live, or indeed, the old folklore of a city being alive and well, makes for far greater horror. The threat remains near to our homes, where we believe we are safe, just as atrocious horrors throughout history, such as the Holocaust, remain so recent. Folk horror, then, would seem to encapsulate our shared anxiety of history repeating itself.

It might be of interest to note at this point, in drawing towards my conclusion, that the study of folklore suffered a period of negative public perception after the Second World War due the Nazis’ association with folklore and the occult. Did this truth influence writers and filmmakers of the late ’60s and early ’70s, just as it did musicians? For example, the majority of lyrics composed by Pink Floyd’s Roger Waters — in particular, the tragic narrative of his epic work The Wall. It echoes with the aftermath of war.

And consider the rise of traditional folk music, and subsequently folk-rock, during the Vietnam War. There was a significant anti-war sentiment in many folk-rock and traditional folk-inspired lyrics. Was the folk horror narrative, emerging at the same time, a warning about not learning from the past?

We the readers traverse the folk horror narrative with hindsight, as it were, but the protagonist remains powerless against the forces they believe or know as evil and false. It is a warning to us against the horrors of repeating the past.

By living through the past or past beliefs, we experience the narrative plea to change our present consciousness, which is, of course, a plea to change ourselves, for we are always creating our future by our actions in the present.

Quite content with my meditations, I poured a final glass of wine, selected a book from my shelves – a rather poignant novel whose spine had slunk back into the bookcase, hiding in the shadows – and retired to my bedroom to read.

After I explained my proposed folk horror definition to my colleague, he asked me for a possible example.

‘I quite agree,’ he said. ‘So, let’s say I do accept this definition as logical, could you then give me an example with which I can test the sense of your definition?’

‘Why not try The Day of the Arrow by Philip Loraine,’ I said, smiling. ‘I think it works as an excellent example of the folk horror narrative.’ This was the book that I read whilst my mind was heady with wine. A book my grandfather ‘The Professor’ had given me for a gift as a child.

It is a tragic tale imbued with folklore and horror, first published in 1964. Reading this book was a part of my childhood, a memory made even greater by being a gift from my grandfather, the man who taught me so much about folklore. It seems only right that this text should play such a significant influence in my definition of folk horror.

1966 saw the release of a film version of the book called The Eye of the Devil. I recommend reading the book before the film, as is so often the case. But what is less often is recommending that you do both, for though The Day of the Arrow will always trump The Eye of the Devil, both are worthy of your time.

At the time of writing this, I am yet to hear back from my colleague. I gave him my copy of the book at the beginning of Lent, so perhaps by now while you read these words I will know his thoughts. But what do you think?

Is the antithesis to the folk horror narrative the genre known as Speculative Fiction? For Speculative Fiction warns us against not heeding the lessons learned in understanding historical human ignorance, with its threats of a dystopian future that are quite ‘other’ to our hopes for our own futures.

It would make for an intriguing creative writing project to invert the folk horror narrative model and take an archaic hero into a modern setting. This inverted folk horror would perhaps be akin to time travelling into the future, where the protagonist can’t understand the new flux in moral stance. Speculative Fiction, then, is perhaps related to folk horror in the antithesis, as it explores this plot/character/setting inversion.

Matilda Groves is a folklorist and author from Lower Slaughter, Gloucester, England. Her current and upcoming works can be found here. You can also follow Matilda on Twitter: @portmanteaulore.