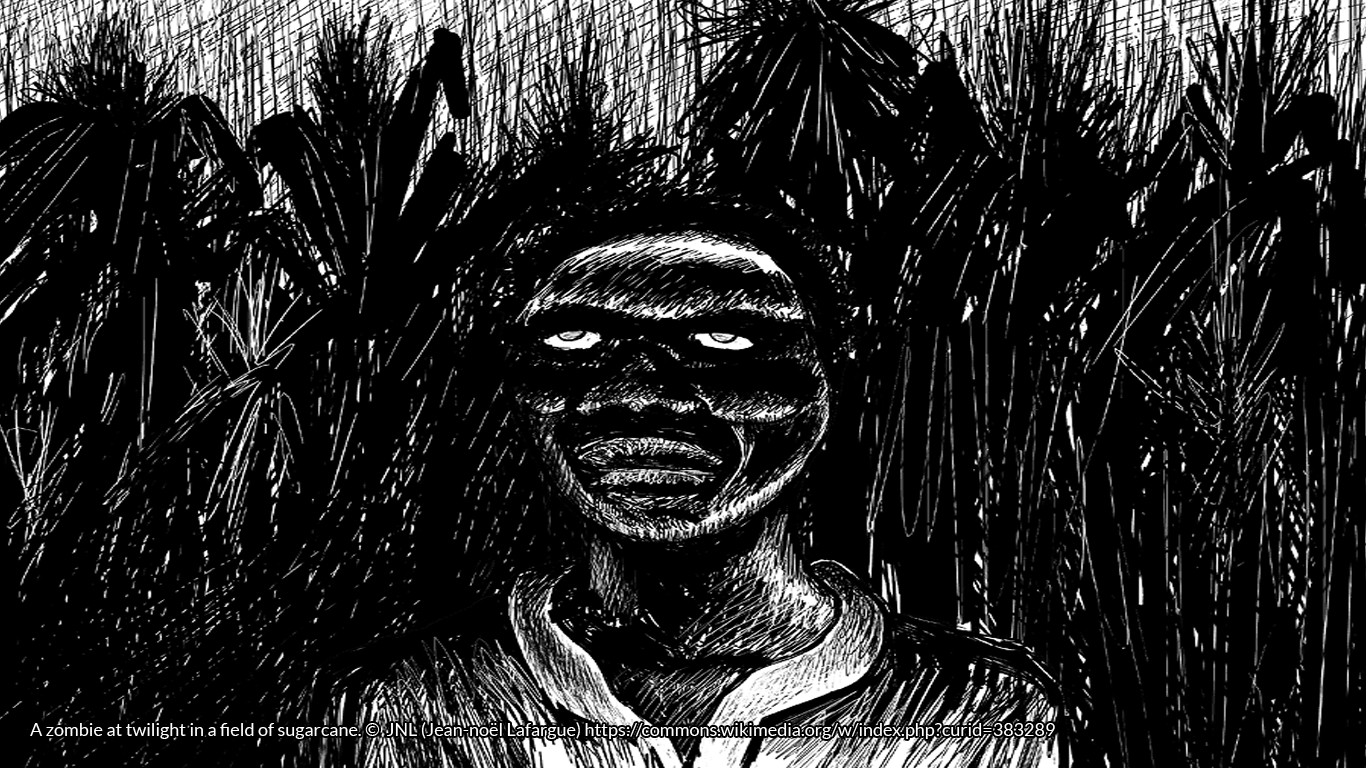 Zombies: Through Folklore, Film and Fiction

When one hears the word “zombie” various images come to mind: usually that of flesh-eating, brain-devouring monsters; but that is just our modern perception of the creature.

In a time not too long ago, people were ripped from their homes and carried across the sea to work in sugar plantations where death seemed a mercy. Death was the only way to freedom, to lan guinée (literally “Guinea”, or West Africa) — the afterlife. Suicide was a slave’s only way to take control over his or her own body. Yet, fear of becoming a zombie stopped many from taking this escape from a brutal life of hunger, extreme overwork and cruel discipline: Zombies couldn’t go to lan guinée. Zombies in the Haitian Voodoo culture were reanimated corpses that were brought back by Bokors, Voodoo priests concerned with black magic. Though they physically looked the same, their memory would be erased and they would be mindless drones. These slaves had been taken from Africa, where legends of witches resurrecting the dead to create servants and slaves were the stuff of nightmares. The threat of never being able to go to their final rest, to always work in the plantation as a mindless zombie, kept the slaves in line.

Somewhere in the mists of time this creature of folklore, trapped in its own body, was appropriated to become a creature of fiction. Where Haitian slaves feared being enslaved to their own flesh after death, modern zombies are the fictional undead, created through the reanimation of a human corpse. Reanimation doesn’t require magic as it does in the creation of the folkloric zombie. Depending on the genre, the cause can be anything from a viral infection to radiation. 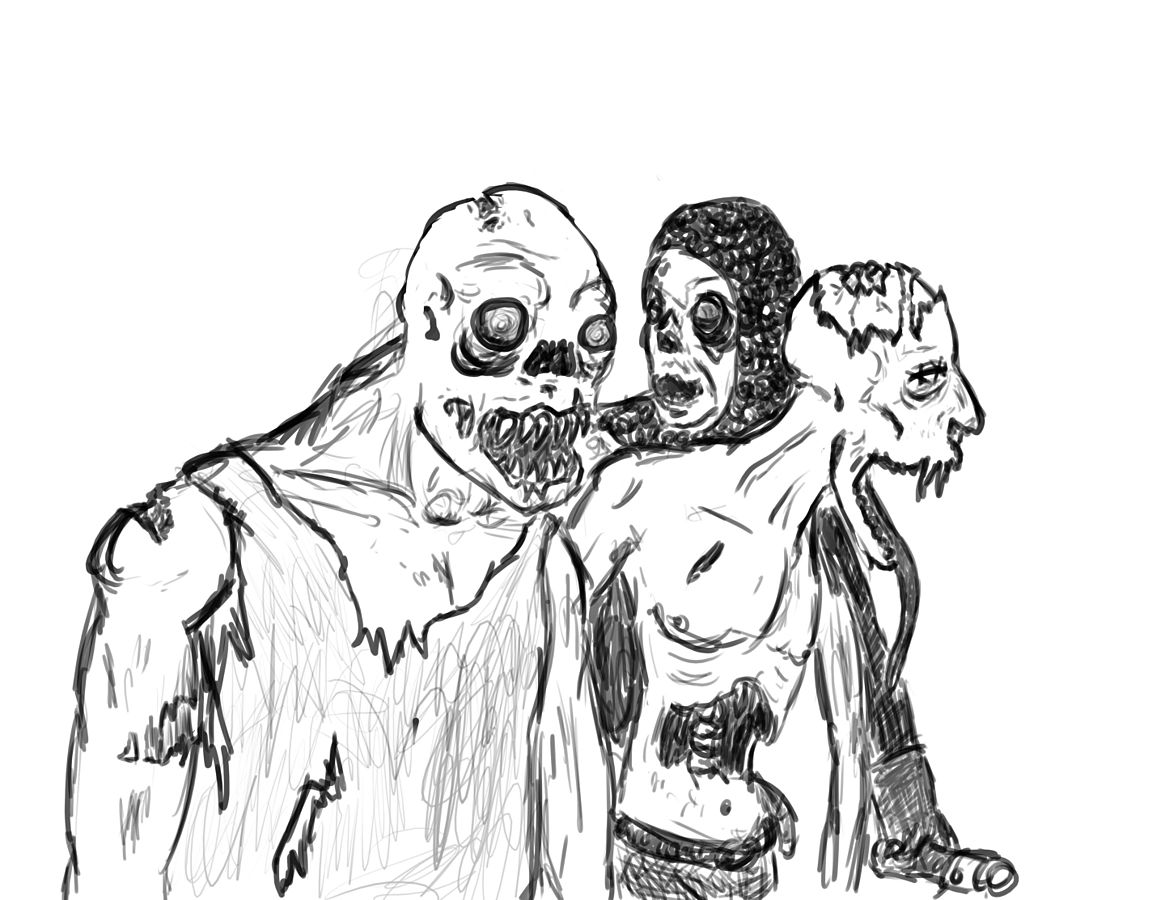 There are nine classifications of zombies, although the one that’s truly based in folklore is the zombie drone. Whether this zombie is dead or not, it is robbed of self and is a witless shell used for slave labour — or whatever its master demands. Yet when looking at modern culture, the zombie ghoul is most prevalent. It has the same characteristics of the zombie drone, yet it’s more of an eating machine. It’s a creation of George A. Romero that was used in films such as Night of the Living Dead, Return of the Living Dead (where eating brains became a favourite pastime for zombies), and others such as Dawn of the Dead and Zombi 2 that had made a “zombie apocalypse” a staple of most modern popular art. Zombies devouring flesh is not an entirely modern notion. Cannibalism was a theme in H. P. Lovecraft’s Herbert West – Reanimator in the early twenties where the reanimated corpse loved consuming human flesh as much as our modern zombies do.

Zombies have gone from representing real-life horrors (Haitian resurrected thralls), to scaring audiences (in the work of Victor Halperin, George A Romero and others), to becoming cute bellhops (Hotel Transylvania) to scaring once again (The Walking Dead). Obviously, despite its grim origins in folklore, the zombie is here to stay.

We have our own type of zombie in South Africa: the xidachane. Most of the folklore surrounding this creature came from when the rail lines were built. “Witch trains” would transport migrant workers, only to deliver them as zombies to work as slaves forever…

Better Off Dead: the Evolution of the Zombie as Post-human By Deborah Christie & Sarah Juliet Lauro, Fordham Univ Press, 2011
A Zombie is a Slave Forever by Amy Wilentz, 30 October 2012, The New York Times
American Zombie gothic: The Rise and Fall (and Rise) of the Walking Dead in Popular Culture By Kyle William Bishop, McFarland, 26 Jan 2010
The Esoteric Codex: Haitian Vodou by Garland Ferguson, LULU Press, 27 March 2016

Ronel Janse van Vuuren is the author of New Adult, Young Adult and children’s fiction filled with mythology and folklore. Her dark fantasy stories can be read on Wattpad and on her blog Ronel the Mythmaker. She won Fiction Writer of the Year 2016 for her Afrikaans stories on INK. Ronel can be found arguing with her characters, researching folklore for her newest story or playing with her Rottweilers when she’s not actually writing.