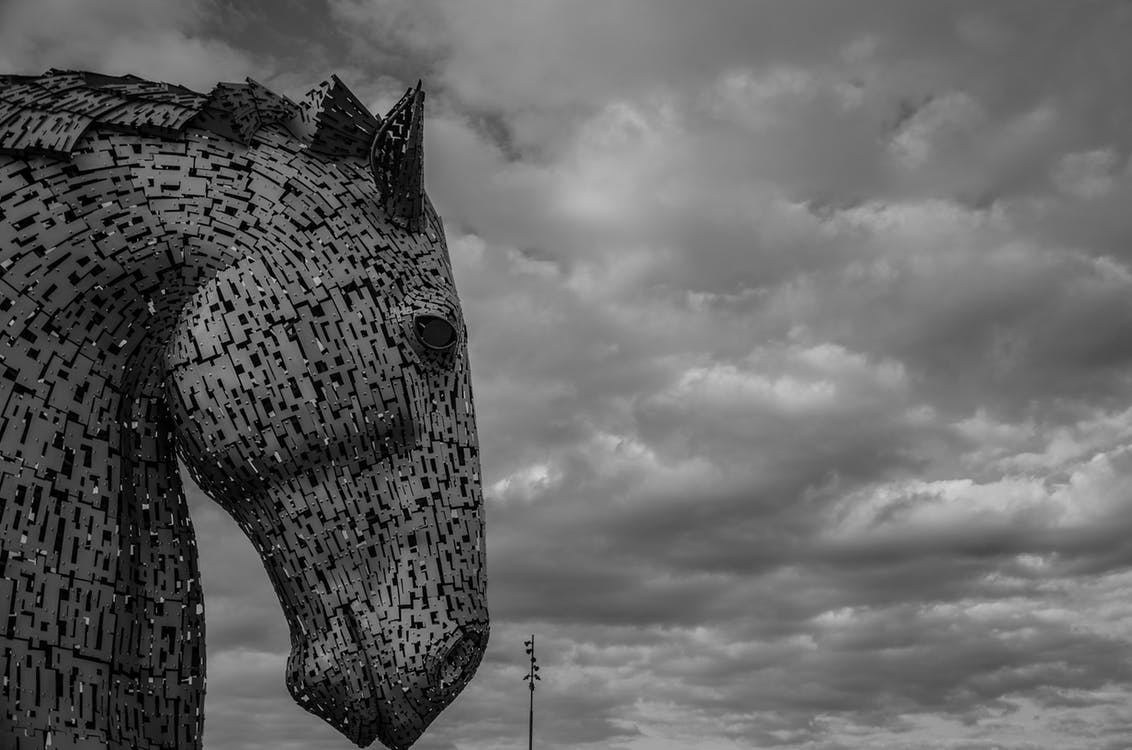 Scottish lore contains some of the darkest and strangest figures in folkloric history: shape-shifters, blood-suckers, monsters without skin. While researching for my novel about a folklorist on the Isle of Skye, I came across stories far more chilling than most gothic fiction, and creatures that have spawned horror movies. For your grisly delight, I’ve selected a few of the eeriest members of the Unseelie Court; the worst of all the fairies.

The bean nighe (Scottish Gaelic for ‘washerwoman’) haunts desolate streams and washes blood from the clothing of those about to die. To some she has appeared as an old hag with webbed feet, one nostril and one protruding tooth, and on the Isles of Mull and Tiree she has breasts so long she throws them over her shoulders to hang down her back. Bean nighe are believed to be the spirits of women who died in childbirth, now doomed to wash the clothes of the near-dead until the day their lives would otherwise have ended.

It is said that if you sneak up on the bean nighe as she sings her mournful dirge and seize hold of her before she flees, she will reveal to you the name of the soul condemned to die. And if your luck is in, she may also grant you three wishes.

The nastiest demon of the Northern Isles, the Nuckelavee from Orcadian mythology is part horse, part devilish man. The beast has no skin; you can see the black blood coursing through its yellow veins, and the pale sinews and powerful muscles are visible as a pulsating mass.

The Nuckelavee’s breath is believed to wilt crops and infect livestock, causing devastation and famine. It was so feared, Orkney Islanders could not speak its name without immediately saying a prayer. In good news, it’s unable to wade through fresh flowing water, so can be escaped by crossing a stream.

The baobhan sith appears as a beautiful young woman wearing a long green dress. Look closely, however, and you’ll see she has deer hooves instead of feet. She is no normal woman: she is the vampire of the Highlands.

The baobhan sith mainly prey upon male hunters, drawn to them by the scent of blood on their clothing. In the recorded tales, they often appear after a man expresses a desire for female companionship. They dance with their victims until they are exhausted, at which point the women’s nails turn to talons:  they then slit open the men’s chests, and promptly drain them of all their blood.

The each uisge is, according to Katherine Briggs, the fiercest and most dangerous of all the water-horses. It disguises itself as a fine pony or a handsome man in order to lure people, most often women, into Highland lochs. There, the each uisge‘s skin adheres to its human prey and the creature dives to the depths of the loch, drowning its victim, before tearing her apart and devouring the entire body except for the liver, which floats to the surface.

The folklorist John Gregorson Campbell recorded many tales about the each uisge. In one, a boy who had touched the horse with his finger and become stuck was able to escape by cutting it off.

Survival tip: watch out for water-weeds or profuse sand in the hair before riding a horse or accompanying a handsome stranger towards the water.

The red cap is a murderous goblin who lurks in ruined fortresses and castles along the borders region, particularly those that were once the scenes of wicked deeds. When travellers take refuge in his lair, he pelts them with huge stones, then soaks his cap in his victim’s blood in order to retain its colour.

He is described as ‘a short, thickset old man with long prominent teeth, skinny fingers armed with talons like eagles, large eyes of a fiery red colour, grisly hair streaming down his shoulders, iron boots, a pikestaff in his left hand, and a red cap on his head.’

Red caps get a mention in Harry Potter and the Prisoner of Azkaban, where they are referred to as ‘nasty little goblin-like creatures that lurked wherever there had been bloodshed.’

The Sluagh or ‘Host’ are a malevolent flock of spirits that haunt the Hebrides. They fly through the night sky, snatching mortals and then taking them into the earth, or dropping them from great heights to their deaths. Considered by some to be fallen angels, and by others to be the unforgiven dead, the Sluagh often take the form of birds. One witness told the folklorist Alexander Carmichael that they fly about ‘in great clouds, up and down the face of the world like the starlings, and come back to the scenes of their earthly transgressions.’

In my novel, The Story Keeper, it is the Sluagh that the local people blame when girls start to go missing. Others, however, believe the cause is far more frightening, and altogether more human.

In her Scottish Fairy Book, Elizabeth Grierson said, ‘Perhaps it was the bleak and stern character of their climate, and the austerity of their religious beliefs which made our Scottish forefathers think of the spirits in whom they so firmly believed, as being, for the most part, mischievous and malevolent.’ Whatever the reason, it’s clear that Scotland’s supernatural beings are more evil than most. So avoid sheltering in ruined castles. And always check for hooves.

Win a copy of The Story Keeper by Anna Mazzola

The wonderful folks over at Tinder Press have offered a copy of Anna’s amazing new novel for a lucky #FolkloreThursday newsletter subscriber this month, with a copy also going to one of our Patrons*!

‘Audrey Hart is on the Isle of Skye to collect the folk and fairy tales of the people and communities around her. It is 1857 and the Highland Clearances have left devastation and poverty, and a community riven by fear. The crofters are suspicious and hostile to a stranger, claiming they no longer know their fireside stories. Then Audrey discovers the body of a young girl washed up on the beach and the crofters reveal that it is only a matter of weeks since another girl disappeared. They believe the girls are the victims of the restless dead: spirits who take the form of birds. Initially, Audrey is sure the girls are being abducted, but as events accumulate she begins to wonder if something else is at work. Something which may be linked to the death of her own mother, many years before.’

Sign up for the #FolkloreThursday newsletter to enter (valid October 2018; UK & ROI only).

Campbell, John Gregorson (1900). Superstitions of the Highlands and Islands of Scotland. Glasgow: James MacLehose and Sons.

Napier, James (1879). Folklore, or Superstitious Beliefs in the West of Scotland.

Anna Mazzola is a writer who, due to some fault of her parents, is drawn to peculiar and dark historical subjects. Her second novel, The Story Keeper, was published in July 2018 and follows a folklorist’s assistant as she searches out dark fairy tales and stolen girls on the Isle of Skye in 1857. Her debut novel, The Unseeing, which won an Edgar award, is based on the life of a real woman who was convicted of aiding a murder in 1837. Anna also writes strange short stories and blogs on weird history for The History Girls. Visit her website here or follow her on Twitter here.