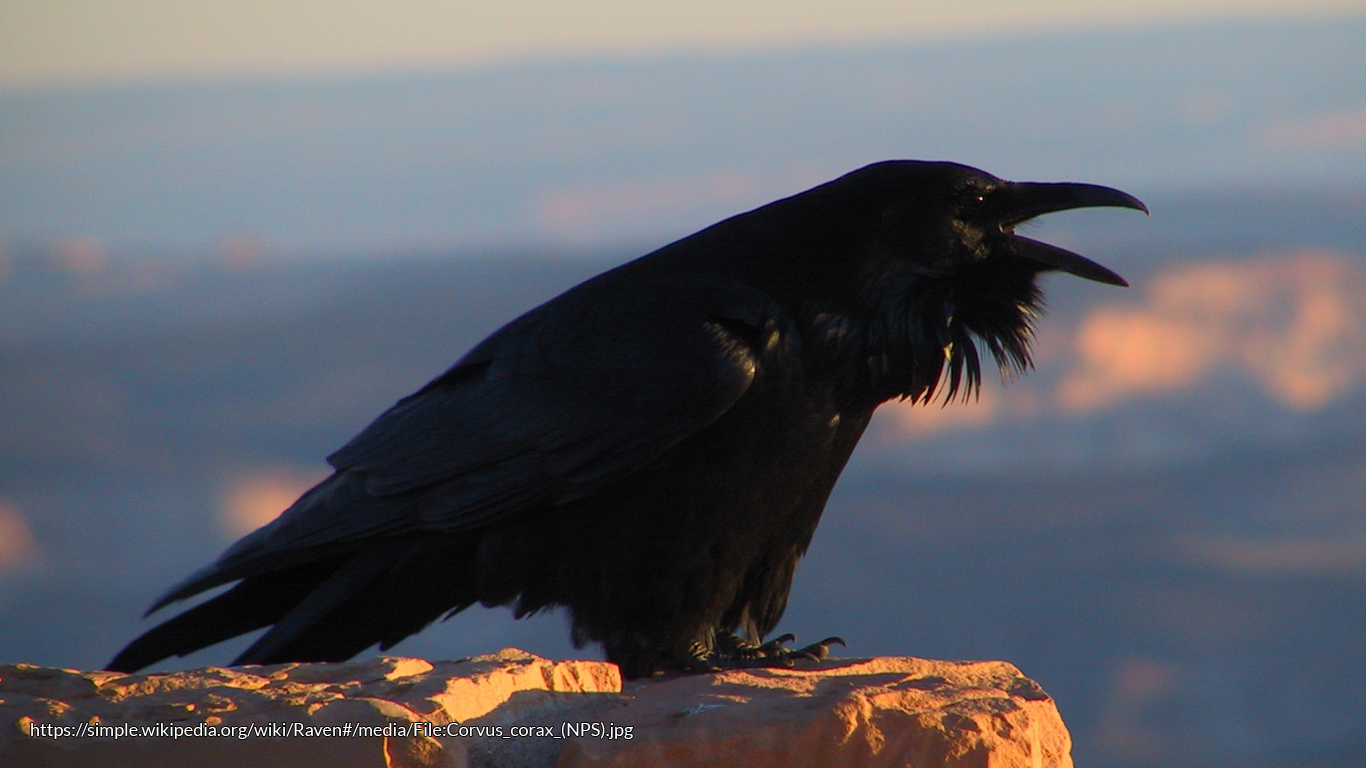 From ancient times to the twenty first century, death and the avian have found themselves inextricably linked across cultures, continents and creeds. One could write an encyclopaedia on the appearances of birds in folklore and their association with death and mortality, travelling from Japan to Scandinavia, France and beyond. I hope this dip into just a few of those beliefs, some common, some less so, will help your imagination to take flight!

The image of the raven, black-winged, glassy-eyed as it picks at the bones of the dead, calling its carrion cry across a Gothic graveyard, is one that is indelibly linked with horror in the public psyche. Perhaps this is thanks to Edgar Allan Poe’s iconic poem of the same name, perhaps to the legends of the Tower of London, perhaps even to the very trappings of cinema and literature. Whatever the cultural background to the raven’s place in the psyche of western Europe, it is not the only avian creature that enjoys or on occasion, suffers from this association with death.

Whilst researching my book, Life in the Georgian Court, I found myself embroiled in many glamorous and iconic love stories yet it was one of the less famous that fired my imagination. Far from queens and guillotines and glittering palaces, this was the small, apparently inconsequential story of a woman with a broken heart.

That woman was Melusine von der Schulenberg, Duchess of Kendal, devoted mistress of George I and mother to that king’s three illegitimate children. She had been at George’s side for most of his adult life and, when her lover died after a massive stroke during a trip to Hanover, Melusine simply couldn’t bring herself to admit that he was gone. She was adrift, bereft with grief and when a bird flew through the open window of her chamber one day and settled there with no intention of leaving, the despairing duchess took it as a sign from beyond. The heartbroken Melusine was convinced that the bird contained the spirit of her dead beloved and she made a pet of it. Wherever Melusine went, the creature was with her and she sat up into the night talking to it as though it was George, convinced that, as long as she had her pet, she had not lost the man she loved. Over the years that bird has been everything from a swift to a dove yet the most popular telling of the story casts the creature, unsurprisingly, as a raven.

Melusine was not alone in her belief that birds could carry the spirits of the dead both to and from the afterlife, and ravens in particular loom large in folklore. Back in the annals of ancient tales, the goddess, An Morrigan, took the form of a raven whilst Welsh god, Bran the Blessed, also appeared as the iconic bird. Cicero, of course, was warned of his impending death by a raven and legends tell that if the famed murmur of ravens leave the Tower of London, it will fall. The link between this handsome carrion bird and the dead is a strong one and can be found throughout Europe.

In Sweden the call of the raven after dark was interpreted as the howl of torment of a murdered soul, whist in Germany and Denmark, they were associated with the damned or even the devil himself.  The raven shares this dubious honour with blackbirds and crows, whose appearance has also been associated with impending death. It is notable that all of these birds are black, a colour anciently associated with evil and darkness, with the other.

Some tales aren’t specific to a certain species, of course, and Western superstition still holds that a bird entering the house portends a death, with my own friends divided on whether it should be a crow, dove, robin or in fact, any bird. Even in my own childhood, older relatives winced at the impending disaster should a bird sing or a cock crow after dark, whilst a friend in France reports occasionally still coming across the ancient belief that the souls of unbaptised babies enter the bodies of birds until they are called to heaven. Similarly, innumerable beliefs and centuries of taletelling have gone into the enduring legend of the Seven Whistlers. This story of seven birds that sing at night harks back centuries and over multiple cultures, each one putting its unique folkloric spin on the tale. The song of these night birds forecasts calamity and depending on where one finds one’s folklore, they are  variously the spirits of souls in torment, blaspheming Leicester locals who were caught in a whirlwind and swept up to the sky or, most popularly, the souls of the seven men who crucified Christ.

Across Europe and beyond, the folklore of death is rich with avian legends and alongside the raven, the owl features in innumerable stories that associate it with the darkness and tragedy. In the case of impending disaster being foretold by birdsong at night, this is likely due to the eerie, far from melodic cry of the nightbird. In centuries past this sound would split the pitch darkness of ancient times, a world away from the cheery sound of the songbird, whose song announced the end of the night and the coming of the dawn.

Away from Europe, in ancient Japanese culture we find an echo of the French belief with birds serving as psychopomps, carrying the dead to the afterlife. Native American folklore held that the souls of tribal chiefs lived on in birds of prey, the powerful symbolism of these majestic creatures a world away from the unbaptised souls of the infants who flew over France awaiting salvation.

It seems that, across nations, cultures and religions, birds have been associated with death for centuries. Whether they carry omens of tragedy to come or provide a vessel for earthbound spirits, from Melusine’s raven to the modern belief that fresh white feathers might be a sign of comfort from a deceased loved one, birds have never been far from the arena of death folklore. Birds are, of course, free to go where we cannot. They soar and fly, reaching more closely to the heavens than any other creature and perhaps this is why they are so inextricably linked with the fate of the soul.

After all, with beliefs of limbo and purgatory once widespread throughout the western world, wouldn’t it have been more of a comfort for our ancestors to believe that their loved ones were not consigned to such a grim place, but instead flew free? With her lover’s spirit reborn in the raven, Melusine was never forced to confront the death of George because he remained there with her, freer than he had ever been in life. No longer rooted to the earth, these spirits are free to see what we mortals cannot, whether it is the fields of Europe or the wide open spaces of the Americas. Unconsciously, these beliefs reject the finality of death, keeping those we have lost on earth whether in a raven, a dove or a magnificent condor.

Folklore from the ancient classical cultures to the modern era is rich with stories that brings the dead and birds together, from the first recorded stories right up to the modern day. With magpies, ravens and crows still sometimes seen as harbingers of doom, everyone seems to have a bird or local legend of their own. I would love to hear from #FolkloreThursday readers and perhaps learn some new tales from across the world.

Catherine’s book, Life in the Georgian Court, is now available online.“As the glittering Hanoverian court gives birth to the British Georgian era, a golden age of royalty dawns in Europe. Houses rise and fall, births, marriages and scandals change the course of history and in France, Revolution stalks the land. Peep behind the shutters of the opulent court of the doomed Bourbons, the absolutist powerhouse of Romanov Russia and the epoch-defining family whose kings gave their name to the era, the House of Hanover. Take a journey into the private lives of very public figures and learn of arranged marriages that turned to love or hate and scandals that rocked polite society. Life in the Georgian Court is a privileged peek into the glamorous, tragic and iconic courts of the Georgian world, where even a king could take nothing for granted.”

Black, Jeremy, 2007. The Hanoverians: The History of a Dynasty. Hambledon and London.

Moreman, Christopher M, 2014. On the Relationship between Birds and Spirits of the Dead. https://www.academia.edu/5112298/On_The_Relationship_between_Birds_and_Spirits_of_the_Dead

Young, Edward, 1787. The Complaint: or, Night-thoughts on Life, Death, and Immortality. Prichard & Hall.

Visit Catherine’s 18th century world at www.madamegilflurt.com. Catherine Curzon is a royal historian and blogs on all matters 18th century at A Covent Garden Gilflurt's Guide to Life. Her work has featured by publications and websites including BBC History Extra, All About History, History of Royals and Jane Austen’s Regency World. She has also provided additional material for the sell-out theatrical show, An Evening with Jane Austen. Catherine holds a Master’s degree in Film and when not dodging the furies of the guillotine, she lives in Yorkshire atop a ludicrously steep hill. Her book, Life in the Georgian Court, can be purchased from online retailers including Amazon UK, Amazon US and at bookstores!