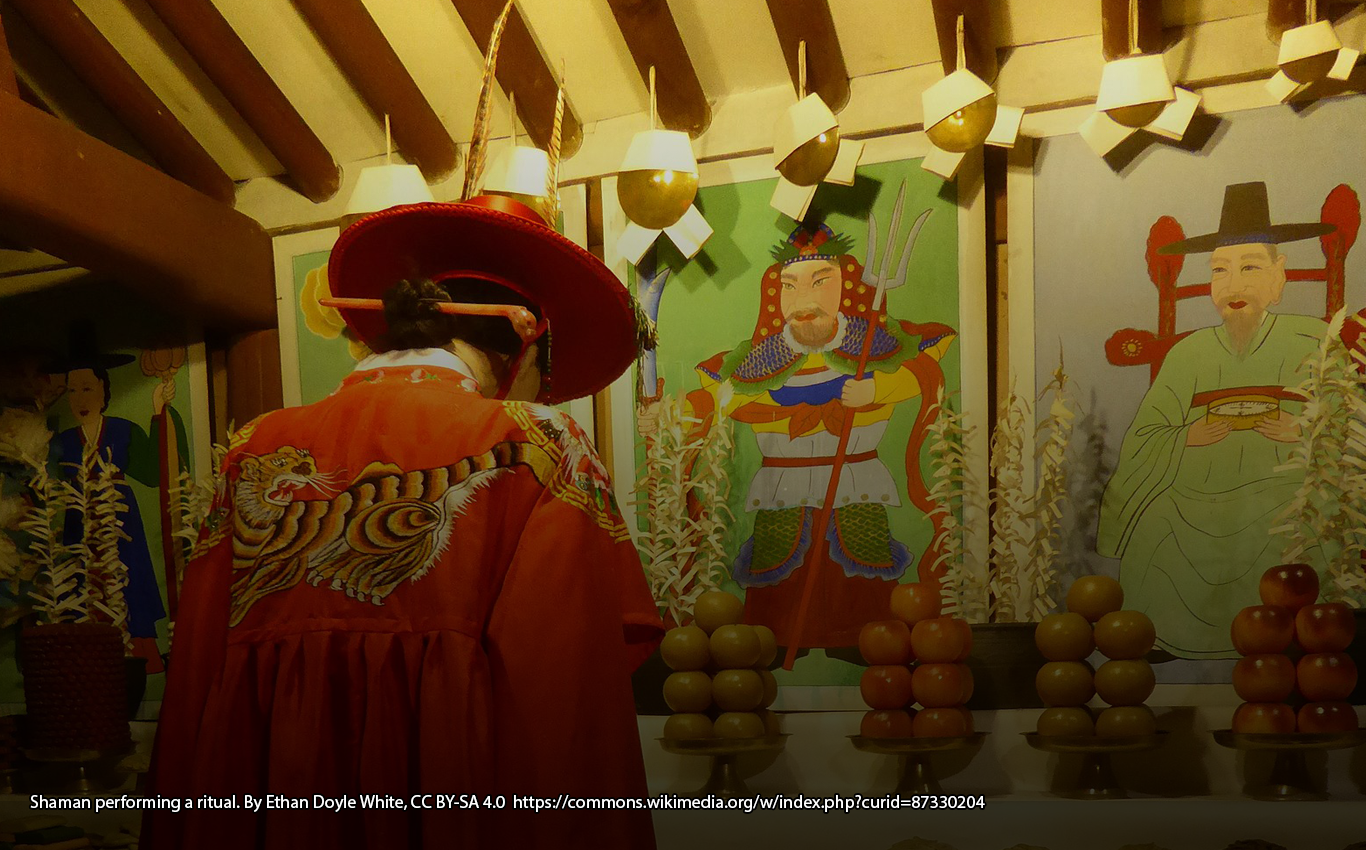 Whilst shamans and their rituals can vary widely from place to place, never in world history has a country industrialized at such breakneck speed as the case of South Korea.  Should we be surprised to find new expressions of old shamanic traditions on the high street today?

The history of South Korea is a turbulent mixture of warfare, despair and cultural exchange with neighbouring countries.  Correspondingly, almost all major religious ideas in Korea (Buddhism, Confucianism, Daoism and even Christianity) were imported at one point or another from China.  The major exception to this rule is Shinkyo; a mix of animism/shamanism that is native to the Korean peninsula and a religion still practiced in various forms today.[1]

Previously, in the animistic village life of ancient Korea (where the world was governed by village deities, sacred trees, mountain gods and divine guardians, etc), it was traditionally the role of women to take charge of the spiritual/supernatural interests of the family in the home.  Whenever one was out of their depths regarding unseen forces within the household or the family, one would visit a ritual specialist (i.e., shamans) for qualified assistance.  For example, regarding Songju (the god of the house, who usually resides in the roof beam) or the kitchen god (Chowang) who must be appeased with prayers and fresh water daily. Female Shamans (Korean: mudang) almost always organized and led rituals to solve these problems via the orally transmitted traditions of Korean shamanism (museok).  Although there are male shamans (paksu) they are much rarer and sometimes designated to the role of assistant, musician or ritual support. 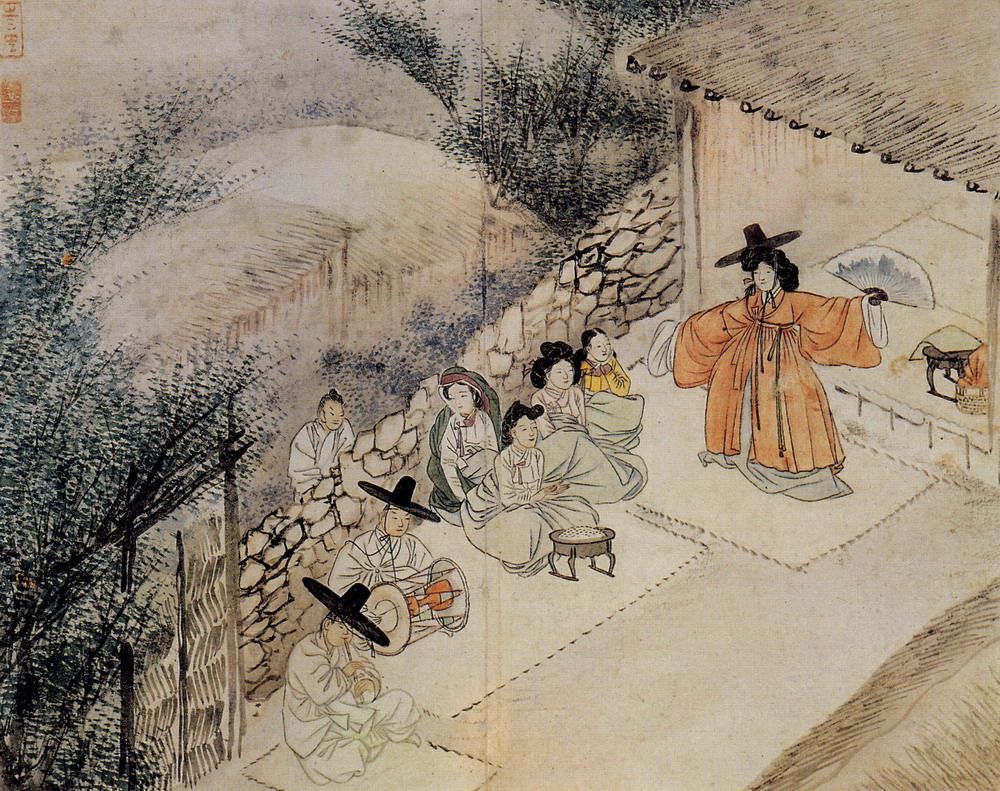 Now far removed from the rural context and enchanted mileu of the past, Korea today has experienced a major shift away from village culture.  In just a few decades Korea has transformed from the ashes of Japanese colonialism and attempted communist takeovers into the ranks of a first world power.  Korea today is becoming an extremely competitive metropolitan hyper-capitalist society where people can frequently undergo lunchtime eyelid surgery in the hope of gaining a marginal advantage in job interviews. Against this backdrop of surviving a chaotic and perilous history, the highly competitive nature of the Korean people and their struggle to succeed crosses over even into the realm of the spiritual.

In a country that boasts Yoido Full Gospel Church (the largest megachurch in the world), and the Koreana Tripitaka (the most complete collection of Buddhist texts, laws and treatise in known existence), Korean shamans are also considered a tangible (though somewhat taboo) spiritual option for removing obstacles or gaining advantages in life.  For a price, one may visit three general types of ‘shaman’ in modern Korea:

All charismatic shamans will experience a spiritual sickness (Korean: shinbyeong) that illustrates their calling to the shamanic tradition, which gets progressively worse until one accepts their spiritual calling and eventual initiation (shin naerim-gut).  Although there are no authoritative scriptures or doctrines in the shamanic traditions, practices are based around a system of ritual performances that vary from region to region.  Charismatic shamans often claim to physically see and communicate with ghosts and unseen forces and will perform rituals (Korean: gut) in order to attract, communicate and frequently become possessed by the spirits of the dead/gods who use the shaman as a vessel for communication.  Whilst these rituals can cost literally up to tens of thousands of dollars what happens in these possession rituals depend largely upon the goals of the client. 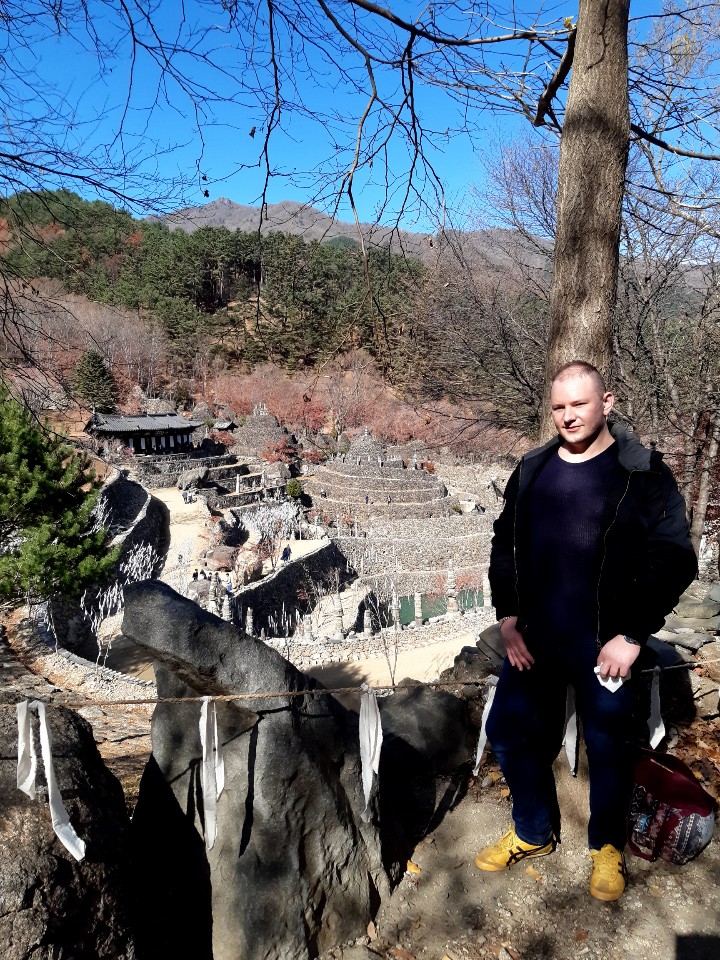 Author pictured at Samseonggung: A unique shrine dedicated to folk-religion in South Korea. The only one its kind, founded by a hereditary Daoist priest named Ham Pil. © David R. L. Jones

Clients may approach a shaman to confront general anxieties in life or safeguard major life events such as pregnancy, births, deaths, illnesses, and so on.  Often it is necessary to intimidate a bothersome spirit – perhaps, for example, a family have attributed recent back luck to a malevolent spirit and wish to have it banished/appeased before their daughter’s university entrance exams.  In this instance a shaman will often summon/become possessed by a senior level spirit or historic general and dance bare-footed across a razor-sharp sword in order to provoke fear in lesser spirits and demonstrate proof of authentic possession to clients.[2]  Unlike the other varieties of Korean shamans, these rituals are highly theatrical and sometimes violent, often with the shaman arguing with a host of invisible entities amid a piercing and thumping cacophony of traditional Korean instruments.

Beyond the scale of this short introduction to Korean shamanism it is worth mentioning that there are further categories of mudang.  For example, shamans who do not have deep knowledge of ritual/tradition and therefore cannot undertake elaborate rituals are known as son mudang, but they can be possessed by the spirit of a small child-god who becomes their tutelary god.  Through cultivation these shamans may be become k’un mudang who undertake the most elaborate and challenging rituals.  Accordingly, fees for shamans will depend upon their level of expertise, their region, the nature of the ritual or perhaps whether or not they work under the tangol system –tied to working regularly with limited individuals, families, communities, corporations, organizations or formally for the ruler/Korean nation itself.  This is perhaps why there was so much controversy about shamans infiltrating national politics under the recent presidency scandal of 2016.

In only a few decades the landscape of South Korea has changed dramatically, particularly regarding wealth and industrialization, but also in terms of religious belief.  Whilst the last seventy years have brought about increasingly large numbers of Buddhists (who might see themselves as custodians of Korea’s ‘traditional’ religion), and Protestants (who often style themselves as vanguards of modernization and progress), charismatic shamans still operate and still offer the equivalent social amenities that they have provided since the birth of the Korean nation.   They remain today as the most visible and successful expression of Korea’s oldest religion. 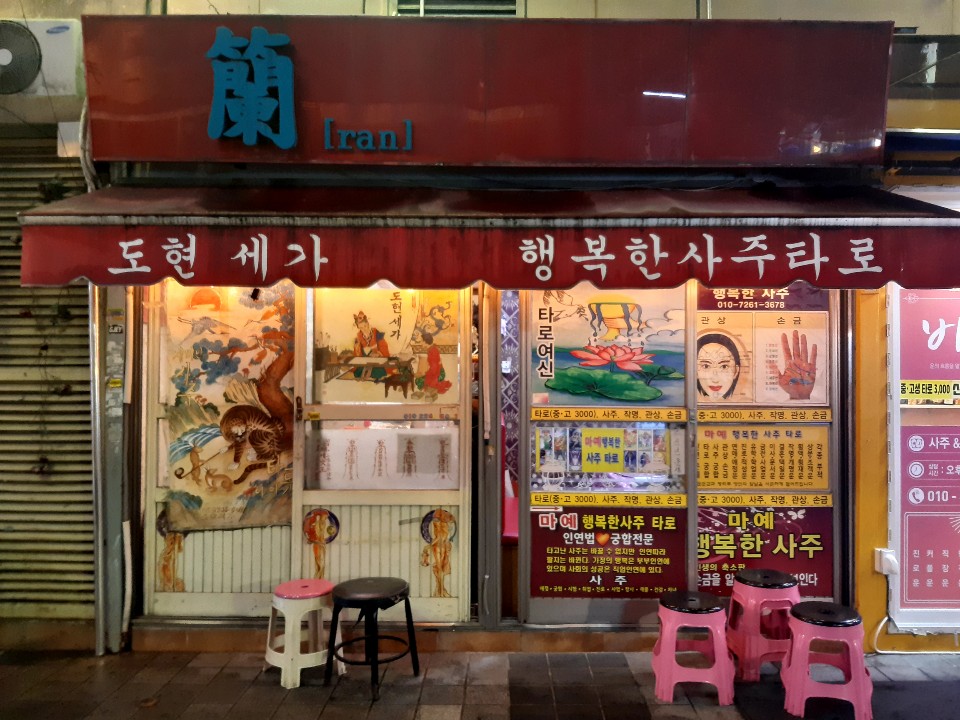 One of the many fortune teller shops lining the street in the author’s neighbourhood (Jan 2021. Busan, South Korea). © David R. L. Jones

Due to mass industrialization, the rural/hereditary forms of Korean shamanism are rapidly declining and being replaced by diviners, fortune tellers and the theatrical high-cost rituals of charismatic city-based shamans (many of which now have internet homepages, popular Youtube channels, and TV shows).  Stigmatized and relatively outcast as the dark caretakers of rural Korean superstition of times past, they have a persisting presence on the high-streets of South Korea.  For Korean shamans, in our current age of enduring uncertainty, business is booming.

[1] Whilst some believe that Korean shamanism may have origins in Siberia (Kim Cheongsuh 2008), others have emphasized the lack of evidence and dissimilarities of Korean/Siberian shamanism (Lee Jeongjae 1997; Yun Soyeong 2006).  Furthermore, some state that the exact origins of Korean shamanism are unknowable when taking into account the large regional diversity of practices, great social influence of neighbouring cultures and the overall integration of Buddhist/Daoist beliefs into shamanism (Lee Jung Young 1973).

[2] Examples of the jakdutagi sword ritual may be viewed here.

David is a world traveller currently working in Korea National Maritime and Ocean University in Busan, South Korea. He has an M.A. in Theology and Religious Studies and enjoys researching new religious movements, Asian folklore and recent social trends in Eastern religions.