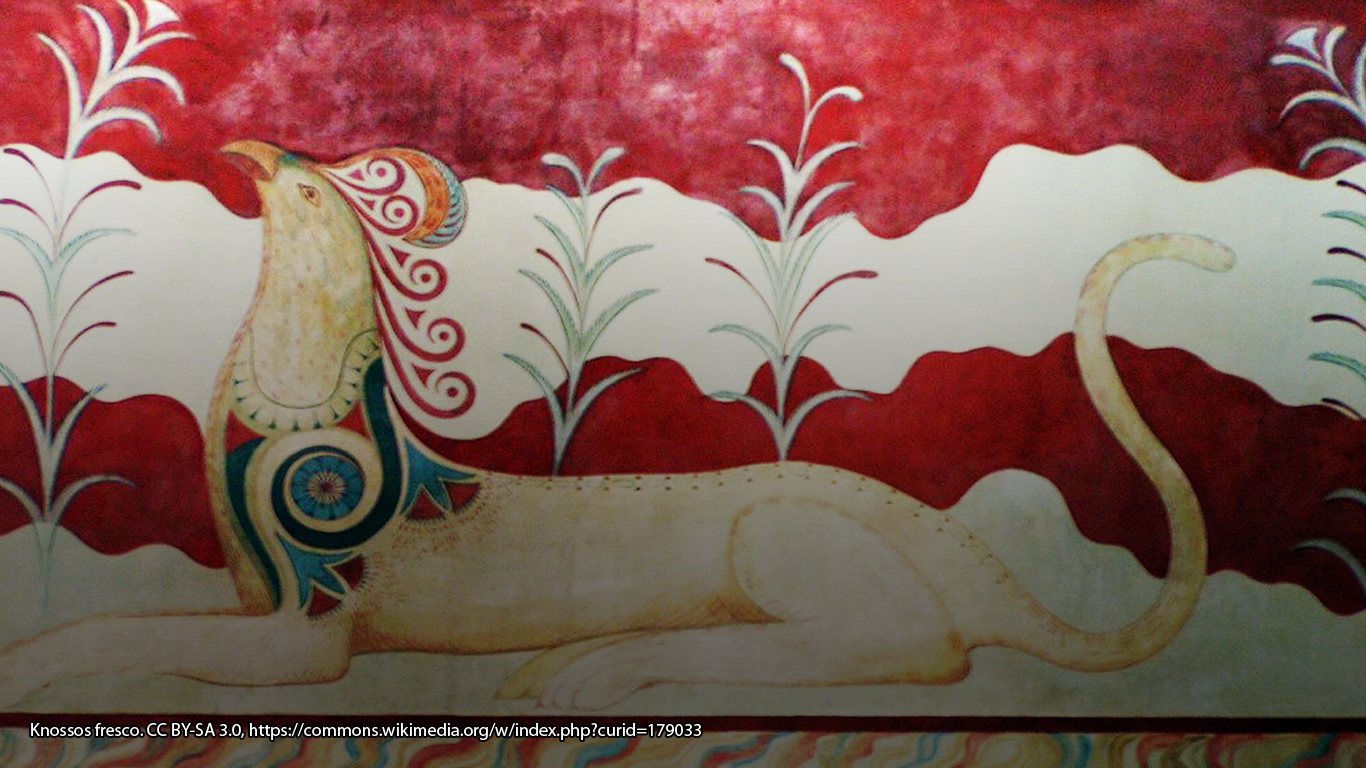 Mythical Beasts: The Griffin, the Legendary King of All Creatures

A griffin is a legendary beast believed to be the offspring of a lion and an eagle, depicted in various ways by many different human cultures in different places throughout antiquity. It is usually depicted as having the back legs, tail and body of a lion, with the head of an eagle, sometimes having projecting ears. It is usually shown with eagle wings, but sometimes is wingless and sometimes has eagle talons on its forefeet. The eagle part was sometimes covered in feathers while the lion part had fur.

King of all Creatures

The lion was considered to be the king of the beasts, while an eagle was the king of the birds. The griffin, as a hybrid of these two, inherited the qualities of both, making it very powerful and the king, or ruler, of all creatures. Griffins were also known by a number of other names including ‘griffon,’ ‘griffon,’ or ‘gryphon.’ They were often depicted as having wings, but sometimes found wingless, as in the fine example found in the Palace of Knossos and shown here. The Palace of Knossos was the ancient ceremonial and political centre of the Bronze Age Minoan civilisation on Crete, described as the earliest in Europe, indicating the age and importance of the griffin motif.

Depictions of griffins are found in the art and mythology of many diverse ancient cultures, including Iranian, Anatolian, Egyptian, European, and Indian. In early Greek art they were shown pulling the chariots of the gods Apollo and Nemesis, and were said to be the hounds of Zeus. By their association with Apollo they became associated with the sun, and through their service to Nemesis became known as protectors and guardians, carrying out retribution for injustice on offenders. One legend tells how Alexander the Great captured two griffins and chained them to his throne. He eventually managed to tame one and rode on its back as it flew him around his realm for seven days.

Griffins were often seen as the guardians of treasure and priceless objects. They were associated with gold and said to guard gold mines, and often appear on tombs as guardians. According to Pliny the Elder, griffins laid eggs in burrows in nests lined with gold nuggets. Other accounts say griffins built a nest like an eagle’s and lay eggs of agate, which is a semi-precious stone.

Aristeas of Proconnesus, a semi-legendary Greek poet, tells of a tribe of one-eyed people known as the Arimaspi. They dwelt in northern parts of Scythia in the foothills of the legendary Riphean Mountains, said to be situated between the cave of Boreas, the Greek god of the north wind, and the Hyperborean region of the world. The Arimaspi were reputed to steal the gold from the griffins, resulting in battles which were often depicted in works of art. The Arimaspi rode horses in their attacks on the griffins, and from this evolved the enmity of the griffin for horses. They were often depicted attacking and killing them. On rare occasions griffins mated with horses, and their offspring were known as a hyppogriff or hippogryph. These had the foreparts of an eagle and the hind parts of a horse, and were said to symbolise love as the horse and the griffin were natural enemies.

A soldier fighting a Griffin in the ‘Alphonso’ Psalter. Source

Scythians living north of the Black Sea tattooed their bodies with images of griffins, but these showed them to have no wings. Instead, they had a large frill on the back of their necks and resembled what a beaked dinosaur called Protoceratops, whose fossilised remains are found in the region, possibly looked like. Although not universally accepted by all scholars, the classical folklorist and historian of science Adrienne Mayor proposes that griffins were derived from these fossilised remains. These may also have been seen by travellers or traders in regions of Scythia and interpreted as belonging to griffins. Word may also have been put about to keep prospectors from known gold mining areas.

There were many different kinds of legendary, mythical or fabulous creatures that were hybrids or composite of two or more animals. As well as bearing the physical features of the actual animal they also carried the characteristics such as boldness, speed, and grace. A legendary beast that was a combination of two or more different animals would possess the combined attributes and strengths of all those animals. Furthermore, they became symbols representing the virtues and attributes in an iconic, allegorical form, which expressed, to those who possessed certain knowledge, a greater meaning. Before the ability to read and write became widespread the use of symbols was, and still can be, an elegant form of language, giving out information. Since ancient times, people have needed to identify themselves and pass on information for many reasons such as in warfare, business, or for religious and social reasons. Images and symbols were chosen to represent individuals and organisations and their personal qualities and attributes, and the griffin was a popular choice for many. As such, the griffin had the traditional attributes such as the strength, courage, and ferocity of a lion together with the speed, vision, and intelligence of the eagle, and these were qualities that were attractive to leaders in war, religion, and politics.

In the fine arts of Europe, the griffin appeared in works such as tapestries and illustrations and began to take on Christian symbolism. Griffins were believed to remain with one partner for life and would not take a new mate even if their partner died, hence the Church saw them as being symbolic of marital fidelity. Furthermore, as a fusion of a bird of the air and a creature of the earth, it was seen as a symbol of Jesus who was both human and divine. In Christian symbolism, they represent divine power and guardianship of the divine and are often depicted in churches calmly and patiently on guard. 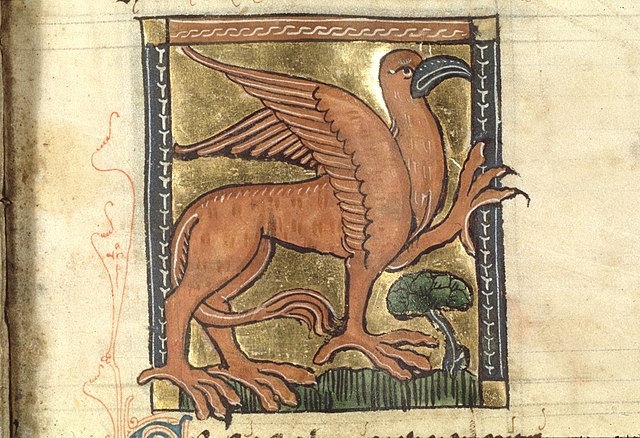 Traditionally, there were two main types of griffin: the Hyperborean, or northern griffin, and the Indian griffin. The Hyperborean griffin was found in the forested hills and mountains that once existed in north-eastern parts of Europe and Russia. It was said to be between two to three feet in height, or roughly the size of a mountain lion.

The Indian griffin had its range in the areas of the Middle East and North-Eastern India. It had more lion attributes than eagle ones.  It was held to be sacred to the sun, and although it could fly was not adept at it despite having wings. Nevertheless they were formidable enough to defeat dragons and elephants.

The claws of a griffin were believed to have therapeutic or curative properties for health, and blindness could be cured by its feathers. In the courts of medieval Europe, goblets made from antelope horns were passed off as being made from the claws of griffins and ostrich eggs passed off as griffin eggs. Both were considered highly desirable objects. It was also believed the claw could detect poison by changing colour and offered protection against illness.

In medieval heraldry the griffin symbolised watchfulness, courage, and was the guardian of treasure. The lion, as the king of the beasts, is seen more frequently than any other animal in heraldry while the eagle, the king of the birds, is the bird that is found the most often. There is an idea that there was a rivalry between these two creatures that paralleled the friction between dominant political powers in medieval Europe. The fusion of the two combines the power of the lion and the eagle and the resulting hybrid stands for strength, military power, courage, intelligence, and leadership. In heraldry, for unknown reasons, the male griffin is presented without wings. Instead it has sharp ray-like spikes from different parts of its body representing sun rays, and sometimes is given two tusks or horns. Sometimes they are known as a ‘keythong,’ which were also known as an ‘alce.‘However, there is also a view that saw the keythong as a separate creature.

Today, griffins appear on many coats of arms and shields in heraldry, and their image is used in the iconography of many organisations, businesses, and associations. Griffin images can be found carved or depicted on many different types of buildings, such as banks and museums, and remains a popular motif with many educational establishments.