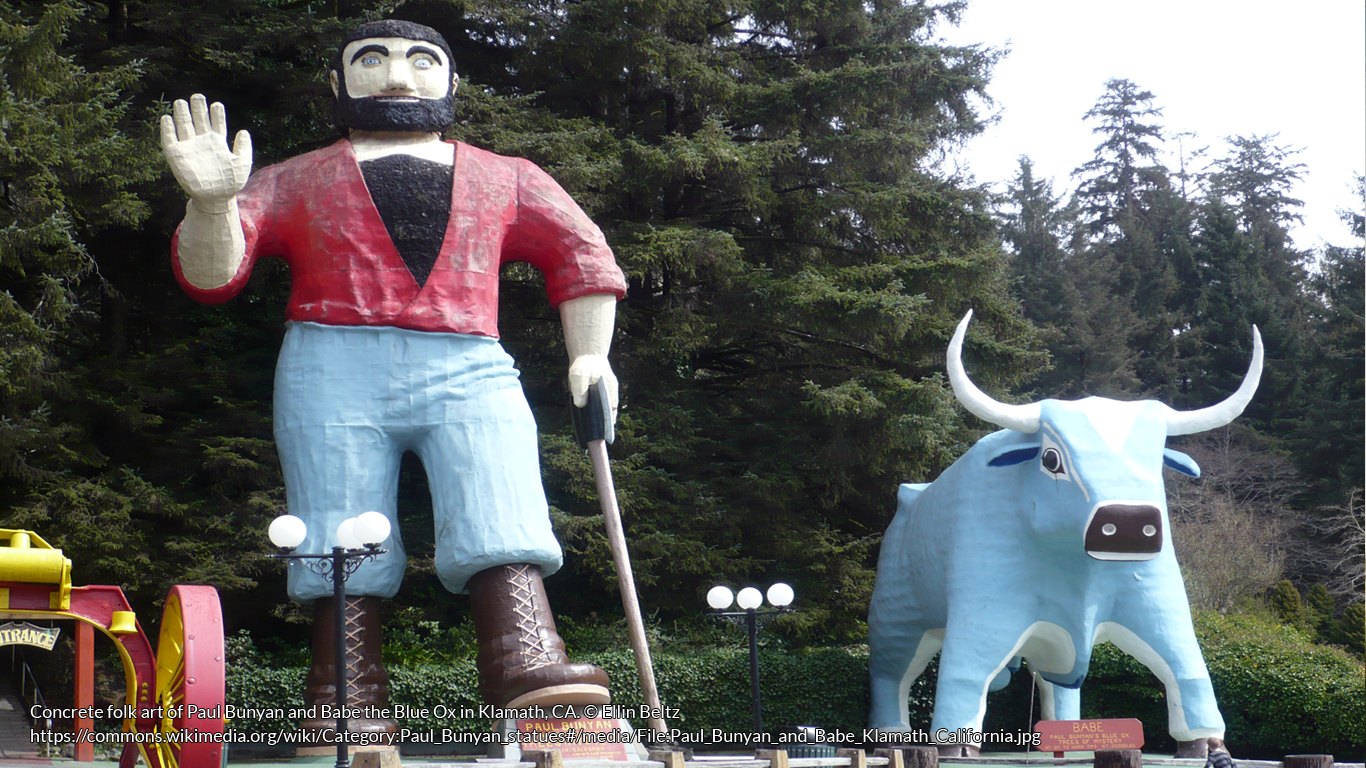 As a relatively young country, the United States of America hasn’t had the same amount of time as older civilizations to develop, standardize, and compile compendiums of folktales arising from grassroots myths and legends. However, the ones that have cropped up over the last few centuries show remarkable popularity and staying power. They also tell us something intrinsic about our enthusiastic spirit, wild heart, flair for invention, and sense of humor as a culture as only tales passed from generation to generation truly can.

Here, in no particular order, are the top 5 American Folktales.

A North American lumberjack of humorously exaggerated size and superhuman skill, Paul Bunyan stories originated in the logging camps and foresting industries along the border between the United States and Canada, most often set in the wilderness of the Dakotas. The first stories told among the loggers themselves were more ribald and less larger-than-life, mainly based in Bunyan’s prowess with an axe and emphasizing the extreme rugged nature of the lumberjacks. However, as the stories were retold for a juvenile audience in the early 20th Century, Bunyan became more of a giant, and the amusement of the stories focused on hyperbole. Although earlier accounts had mentioned a gigantic ox that had been rescued from the Winter of Blue Snow, and which had been so frozen that the ox himself turned blue, the mighty ox was named Babe by the author of publicity pamphlets for a lumber company. As symbols of American vitality and masculinity, and representative of the effort of taming of the wild natural frontier, Paul Bunyan and Babe the Blue Ox haven’t lost their hold on America’s popular imagination, with oversized statues of the folkloric characters erected across the country. 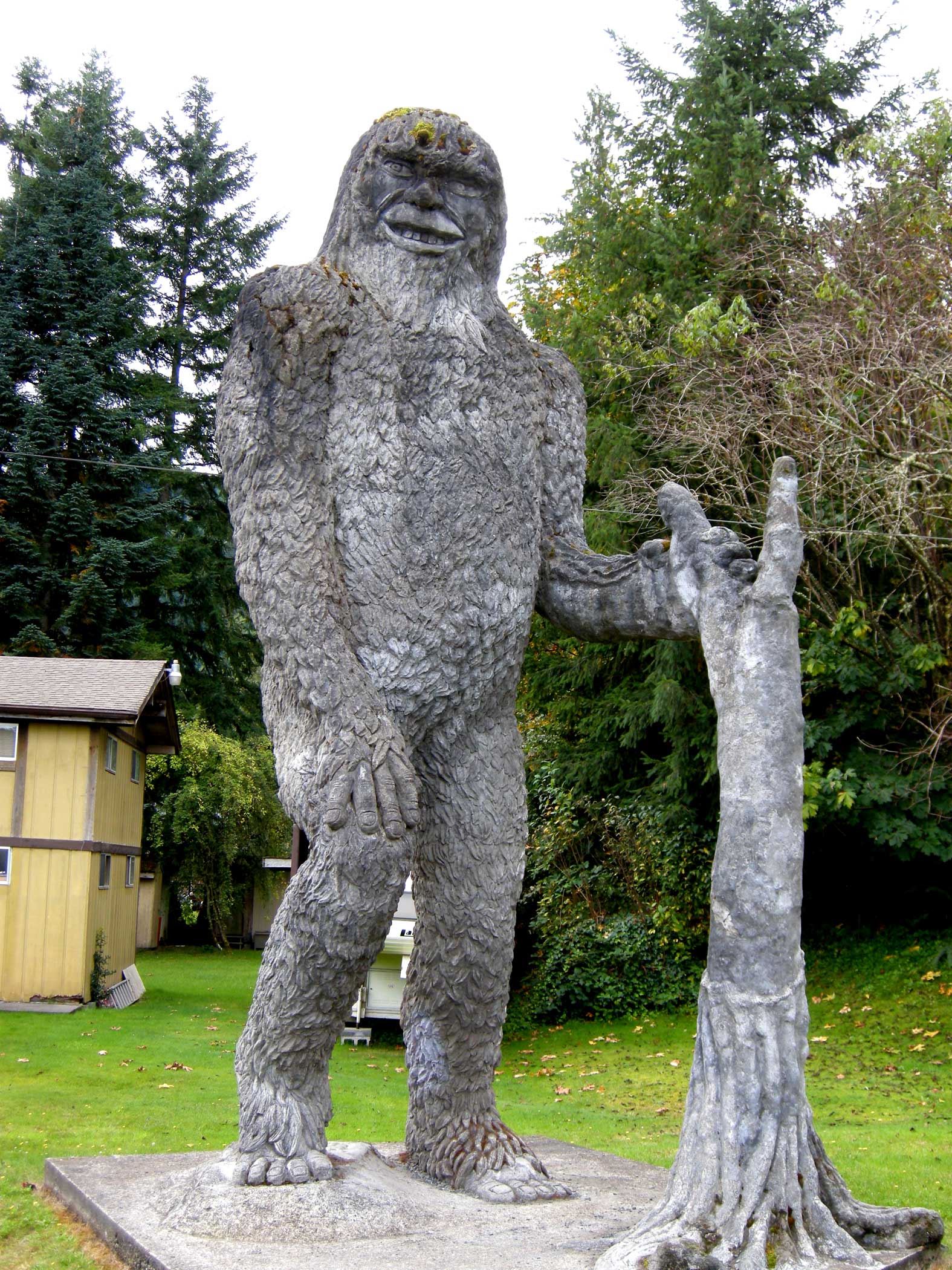 The massive scale of the North American forests must suggest outsized creatures. The Sasquatch, a giant ape-man reportedly being 7 feet to 10 feet tall, weighing more than 500 pounds of brutish muscle, and having a coat of dark brown or reddish hair, has been spotted regularly but never officially in forests first in the Pacific Northwest and then throughout the United States. Many sighters describe the creature with a dome-shaped skull, a broad, sloping forehead, a protruding eyebrow ridge, and large eyes. Often it appears like a cross between a Neanderthal and a gorilla – playing on our primal fears of prehistoric Missing Link survivors — and has been said to smell awful. The name Sasquatch was attached by an Indian Agent named J. W. Burns, who collected tales by the Chehalis and Sts’Ailes natives of Washington State and British Columbia. Sasquatch’s fame increased in America after 1958, when Gerald Crew discovered huge tracks in the wilderness of Bluff Creek, California, and made plaster casts of the footprints. An article in the Humboldt Times by columnist Andrew Genzoli used the term Bigfoot to refer to the beast for the first time in print, and sightings have remained consistent nationally since.

A central figure in the folkloric Uncle Remus stories in the American South, Br’er Rabbit is a classic trickster character, outsmarting authority and subverting society with his wits. An amusing folk hero, Br’er Rabbit is not a simple persona, in that his amoral, chaotic nature can make trouble for friends as well as enemies, and most of all himself. The clever rabbit seems to have a shared dual heritage, with connections to the African folklore tradition of a hero hare brought over and developed in the African-American slave colonies, as well as being a revered character in Cherokee and Algonquin Indian tales. There was certainly interaction between the Native American tribes and the subjects of slavery, but which tales predate the other is difficult to ascertain. It’s possible that because of the sly nature of hares, the character developed independently in multiple cultures, and dovetailed in combination to give rise to Br’er Rabbit as an American personality. One of his most famous stories is “The Laughing Place” in which Br’er Rabbit outsmarts his frenemies Br’er Fox and Br’er Bear with a cave full of bees. In 1946, the Walt Disney Company used the Br’er Rabbit tales as the basis for its animated movie Song of the South, which, because of racism considerations, has never been released for home distribution. 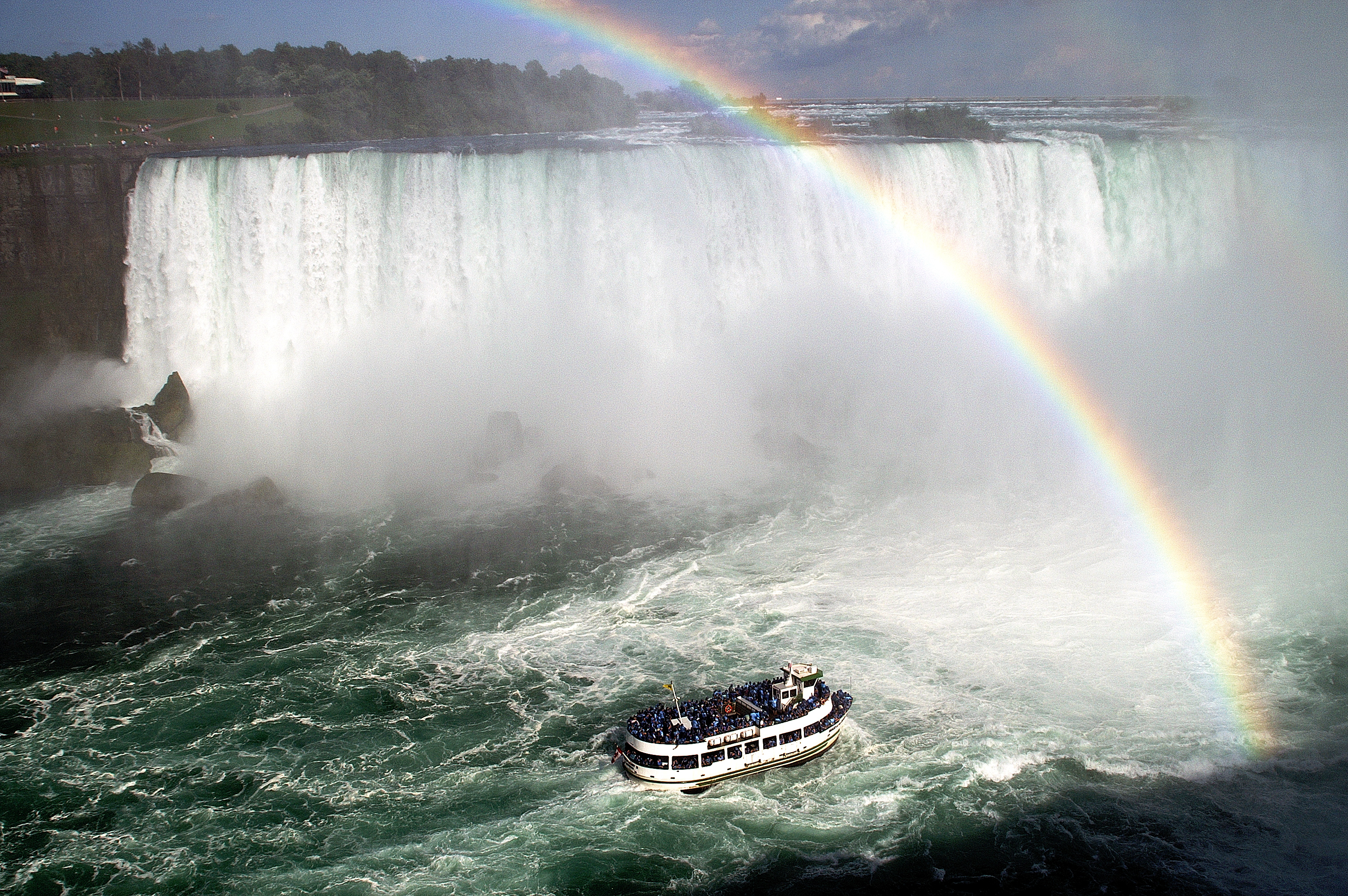 As the legend goes, Lelawala, a young Native American woman from the Ongiaras tribe of the Iroquois Nation, lived with her peaceful people by a wild river overlooking a waterfall. After her husband died of a mysterious poison, bereaved Lelawala set off in a canoe to commit suicide, but she was rescued by a flying Thunder Spirit named Henon who lived behind the waterfall. Lelawala recovered, and promised to marry whichever of Henon’s two sons discovered what was creating the poison upstream. So the younger brother, Henohoha, found a giant horned water snake named Oniare breathing toxins into the river. Henon slew the serpent with a thunderbolt. The snake’s massive body floated downstream and blocked the waterfall, causing the famous horseshoe shape we know today. However, the Thunder Spirits’ hidden home was revealed, and they ascended into the clouds, where Lelawala still lives happily with Henohoha. From there they watch over the Ongiaras people, their descendants, and everyone who can hear their thunder echoing in Niagara Falls. 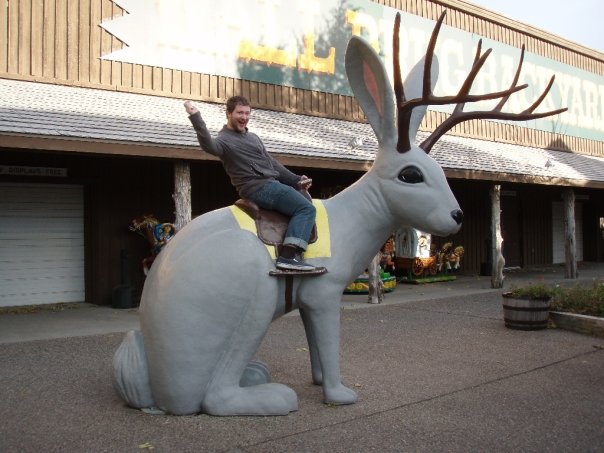 The legendary beast called the jackalope, the exceedingly rare leptus antilocapra, is a hybrid of a killer hare and pygmy deer. It resembles a large, angry rabbit with a rack of antlers. A dangerous, wily critter, a jackalope is known to be able to imitate human voices to confuse hunters and ranchers. References to horned hares may originate in sightings of rabbits affected by Shope papilloma virus, named for Richard E. Shope, M.D., who described it in a 1933 scientific journal as wild cottontails that had “numerous horn-like protuberances on the skin.” The New York Times attributes the American jackalope’s origin to a 1932 hunting trip involving Douglas Herrick (1920–2003) of Douglas, Wyoming. Herrick and his brother had studied taxidermy by mail order, and when the brothers returned from hunting, Herrick tossed a jackrabbit carcass into the taxidermy store, where it landed beside deer antlers. The accidental combination sparked Herrick’s idea for a jackalope. Herrick’s home town of Douglas hosts an annual Jackalope Days Celebration in early June. Jackalope Hunting Licenses are good for hunting only during official jackalope season, which occurs for only one day, on June 31.

Whether celebrating the power of giants, or the tricky smarts of small critters, American folklore revels in a can-do spirit, sly humor, and the dangerous mysteries of the wilderness, which stems from our youthful brashness and abundant natural wealth. New technologies and a global reach has changed oral traditions into electronic ones, but the influential power of grassroots storytelling remains the same.

J. E. Bright is the author of Famous American Folktales, which gathers the most popular and shared tall tales in the USA. Beautifully illustrated, it is a perfect book for bedtime. It includes ‘The Phantom Train of Marshall Pass’, ‘Sasquatch’, ‘The Maid in the Mist’, ‘Paul Bunyan and the Hard Winter’, ‘Moll Pitcher the Fortune Teller’, ‘Guardian of Yosemite’, and ‘Jackalope’.

Do check out some of J. E. Bright’s other books for children:

J. E. Bright is the author of more than one hundred and ten novels, novelizations, non-fiction books, storybook apps, and novelty books for children and young adults. He lives in a sunny apartment in the Washington Heights neighborhood of Manhattan, with his cranky but cuddly cat, Mabel, and his friendly puppy, Henry.

Bihar Folk Tales: The Sparrow and Her Crumbs