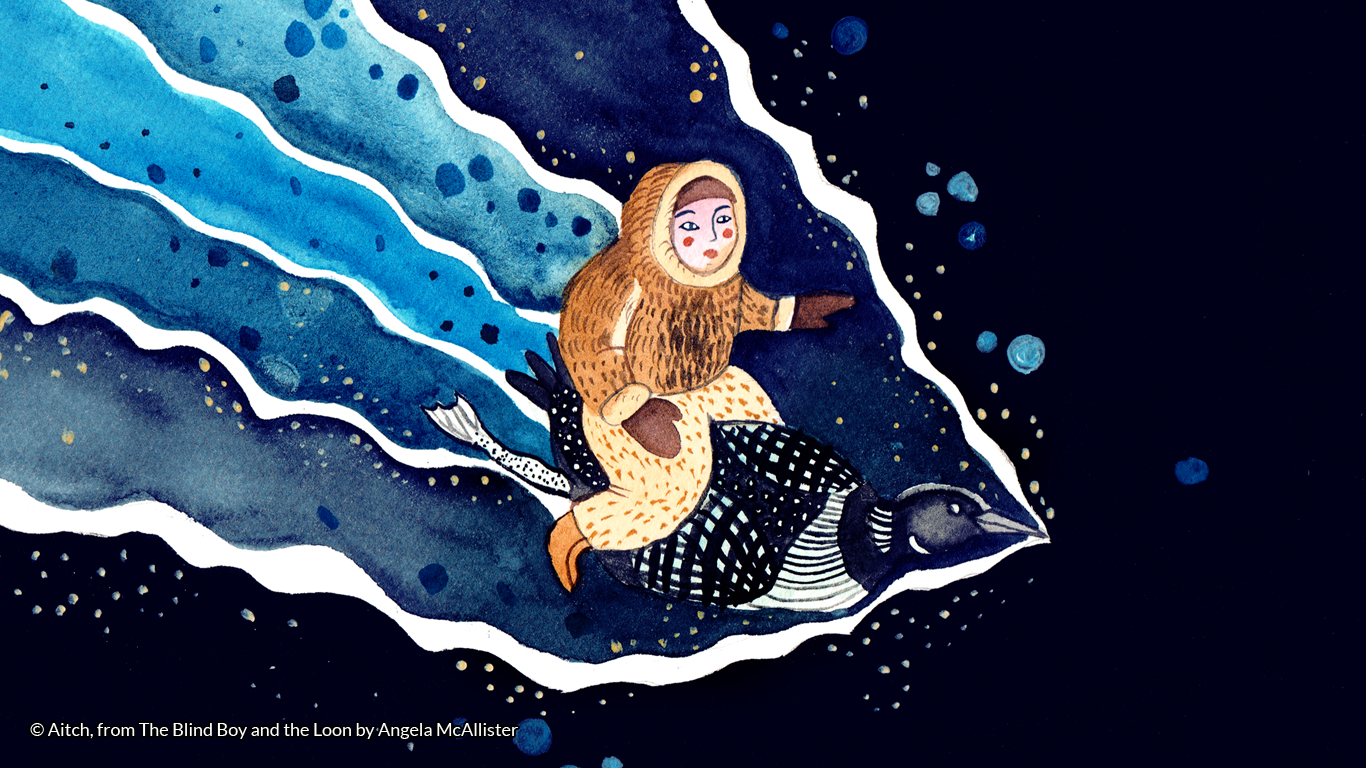 An Inuit Folk Tale: The Blind Boy and the Loon

Long ago, in a land of snow and ice, a woman lived with her daughter and son in an igloo. The boy was skilled at hunting with a bow and harpoon and always returned from a hunting trip with plenty of game on his sled. This he gave to his mother, who cleaned and skinned the animals and prepared the meat. Thanks to the boy’s love of hunting, the storage platforms around their igloo were always well packed with food and the family were never hungry. 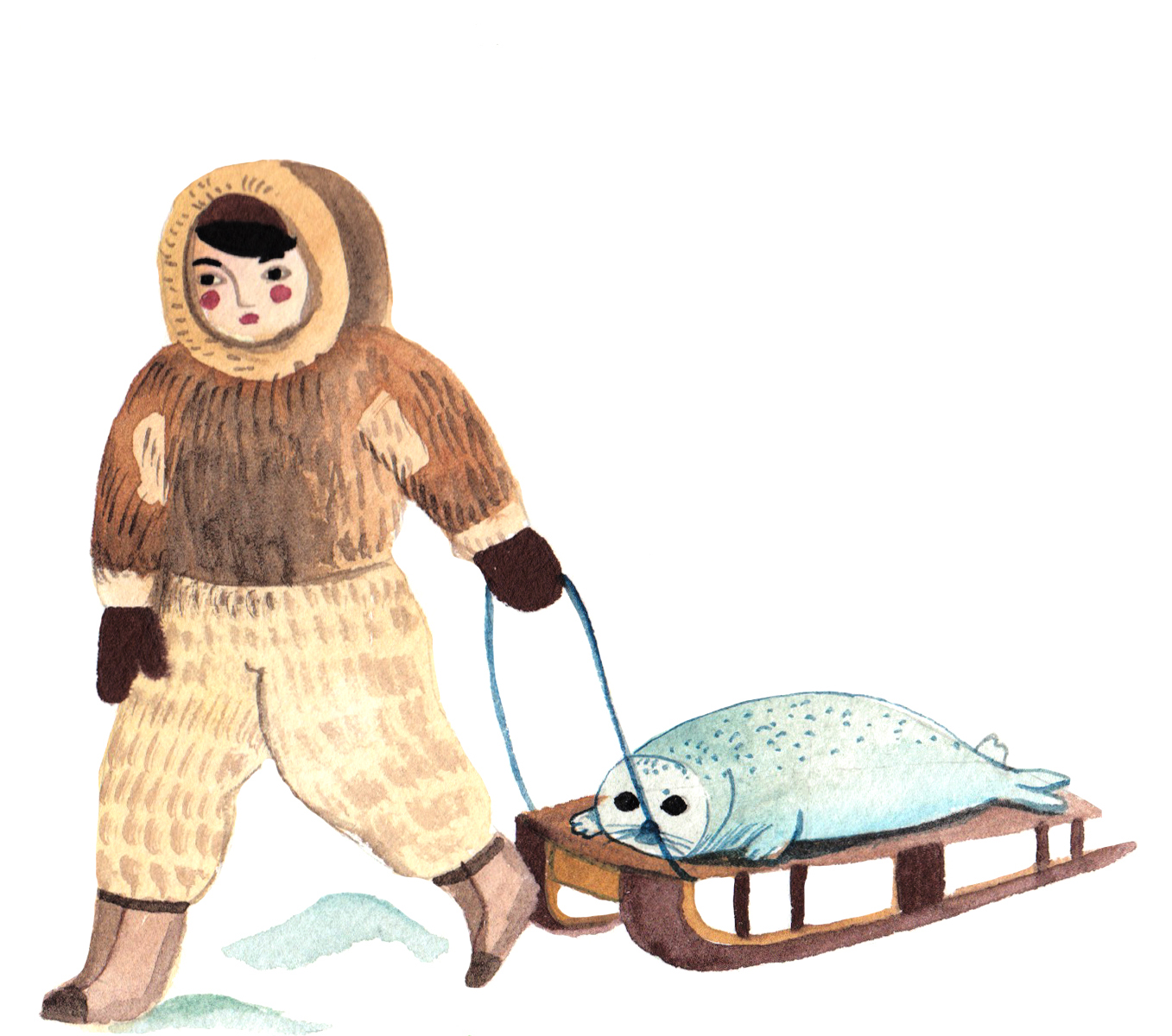 The girl was grateful for everything her brother caught, but their mother was lazy and complained about all the tasks she had to do. “Your brother causes me work, work, work without rest,” she moaned. As time went by, the woman began to hate her son’s hunting trips.

One day, while he was sleeping, she cut a small piece of blubber and rubbed it onto his eyes. As she did so, she wished that he would become blind.

When the boy woke the next morning, his eyesight was gone.

The boy’s sister comforted him, but being blind meant he was no longer able to hunt and could do nothing but sit on his bed all day. Then his mother scorned him for his uselessness. When their food ran out, she trapped foxes and squirrels to eat, but only gave the boy scraps in his bowl and dirty water to drink.

The family lived this way for many months until, one winter’s day, a huge polar bear came to the igloo and began beating at the thin ice window. The boy felt blindly for his bow, took aim and shot an arrow towards the bear, killing it at once. 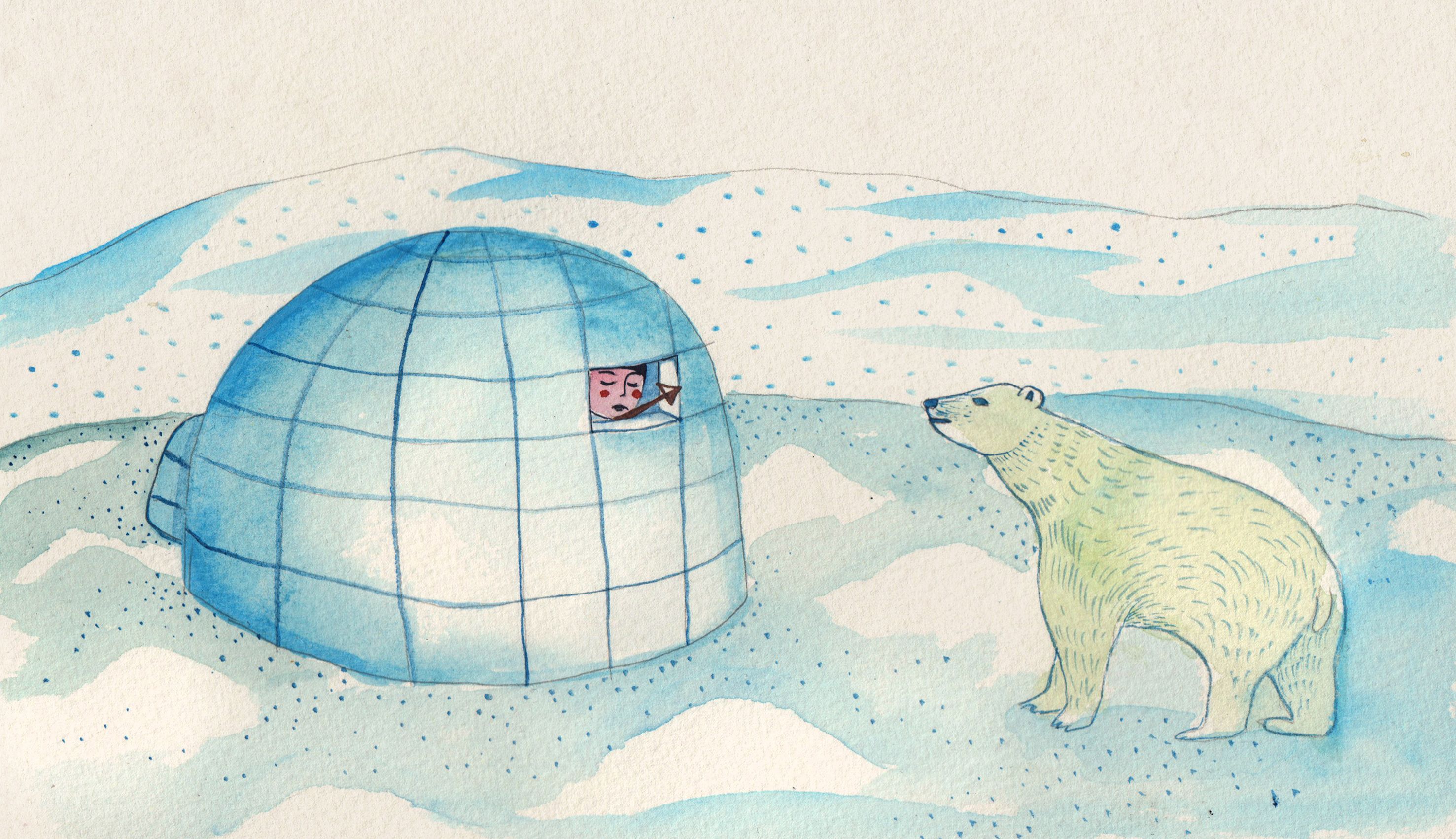 “Fool!” cried his mother. “You just frightened it away.” But soon the boy smelled bear-meat cooking and knew that she had lied. His mother kept the good meat and handed him a bowl of old fox stew. The boy said nothing, but as soon as his mother went out to fetch water, his sister gave him her own supper.

Four years passed. The woman treated her son no better than a dog and it was only thanks to his sister’s kindness that he kept strong.

Then one night, while his mother and sister slept, the blind boy heard the haunting cry of a loon. Knowing that the bird would be on the lake, he crawled out of the igloo on his hands and knees and followed the bird’s voice down to the water’s edge. There he sat and imagined the moonlit view.

To his surprise, the loon spoke. “Your mother made you blind while you slept,” she said. “Let me carry you down into the water of the lake, for it will wash away your blindness.”

“How can that be?” asked the boy fear in wonder.

“Trust me,” said the loon. “Lie on my back and take a deep breath. When you can hold your breath no longer, lay your head against my neck.”

The boy was sure that the loon was too small to carry him, but as he reached out to climb onto her back he felt her grow as large as a kayak. He took a deep breath and she dived into the water of the lake. 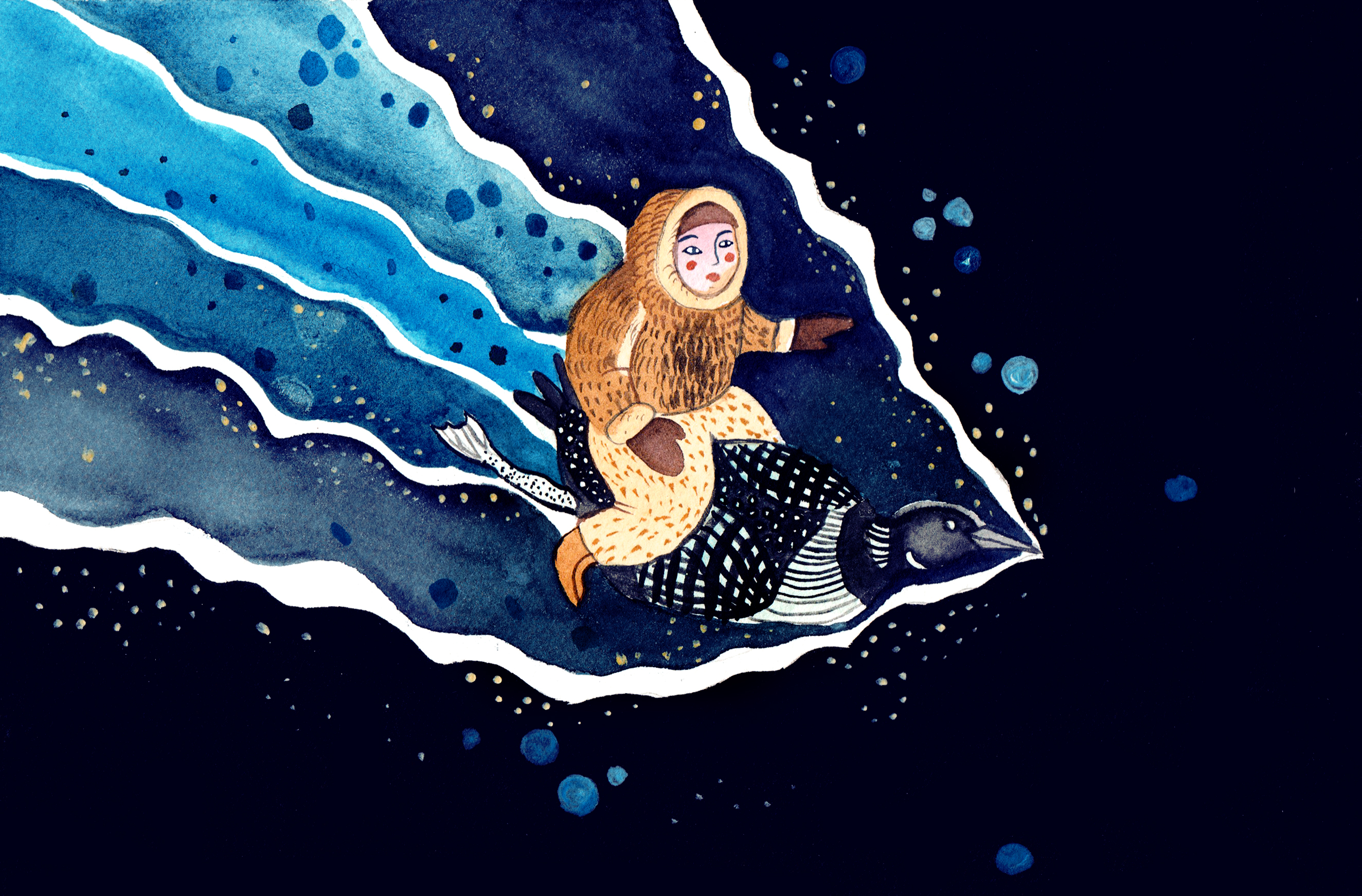 Down, down, down she dived and the boy held tight as the cold water streamed across his face. When he could hold his breath no longer, the boy laid his head against her neck, and she brought him up to the surface.

“Now, what can you see?” asked the loon.

The boy blinked and stared. “A pale light,” he said.

“Then we must dive again,” said the loon.

When they came up for the second time she asked the boy what he could see.

“Everything!” he said in amazement. “I can even see the tiniest rocks on the far mountain!”

“That is too much,” said the loon, and she took him down into the water of the lake once again. When the boy emerged the third time, his eyesight was restored to its normal strength.

“How can I thank you for your kindness?” he asked the loon.

“Just put some fish in the lake for me now and then,” said the loon. “I need nothing else.”

When the boy went home he was horrified to see that the skins his mother had made him sleep on were covered in lice and his bowl and cup were filthy, but he said nothing. He waited until his mother woke up and asked her for a drink. Moaning as usual, she filled his cup with dirty water and handed it to him.

“Throw that away and give me the fresh water you drink yourself!” said the boy.

His sister gasped with joy. “You can see!” she cried. His mother pretended to be pleased but there was anger in her eyes.

It took many days for the boy to regain his strength after sitting in the igloo for so long, but as soon as spring came and the ice melted, he was keen to go hunting once more. “Come with me, Mother,” he said, “and we shall catch a whale.”

His mother was very fond of whale-meat, so she followed her son down to the shore and they took his old whale boat out to sea. They soon saw many small whales, but the boy paddled on until a big whale swam close to the boat.

Working quickly, he took aim and threw his harpoon so that it caught fast in the whale’s back, then he slung the other end of the harpoon line around his mother’s wrist and pulled it tight. With a scream she tried to free herself, but the whale tugged her over the side of the boat and away through the water. 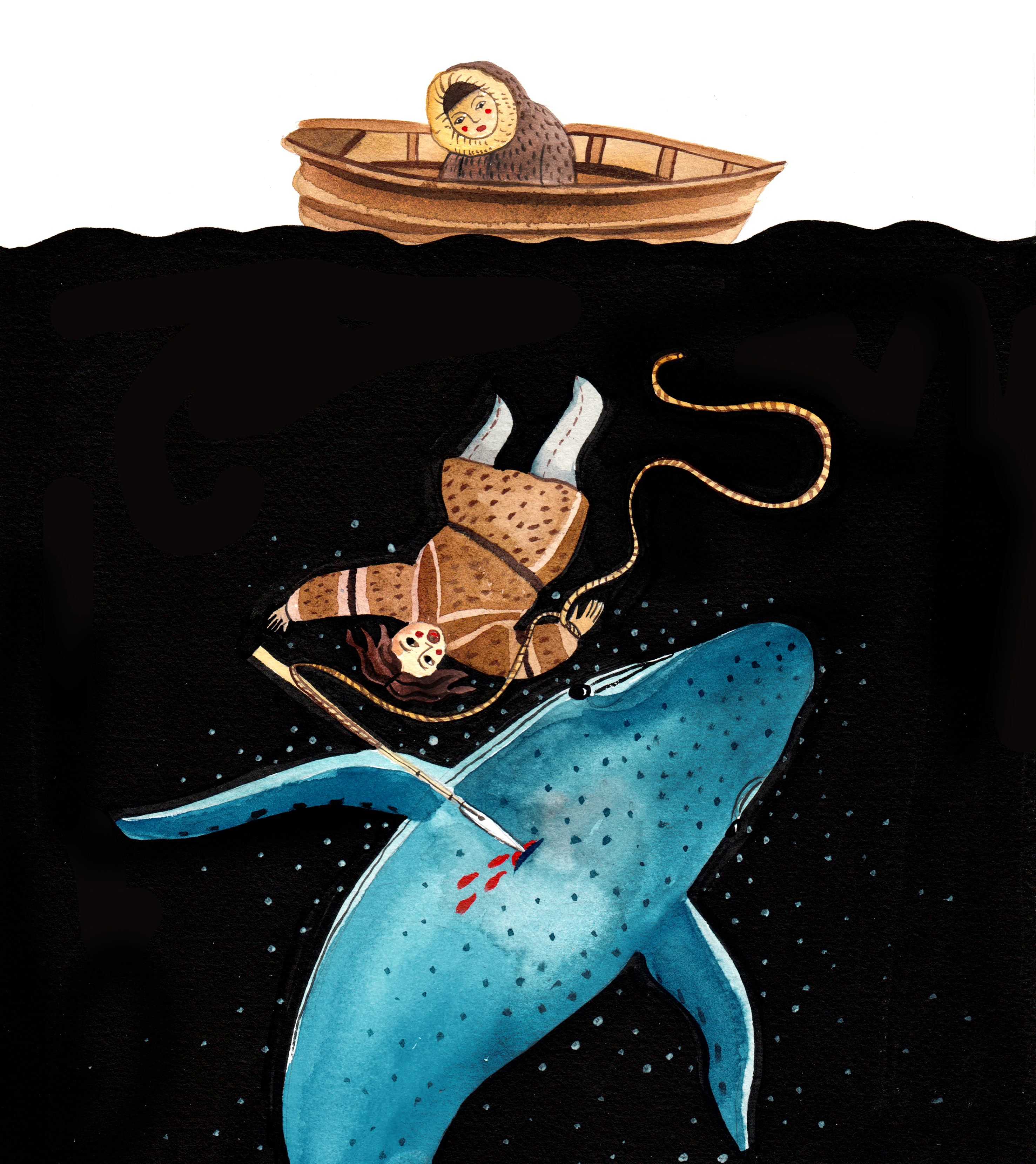 The woman disappeared beneath the waves that day, but some say she became a narwhal, and hunters still tell tales of the screech of a cruel voice on the icy wind.

Win a copy of A World Full of Animal Stories:

The wonderful folks over at Quarto Kids Books have offered a copy of Angela’s amazing book of folktales, A World Full of Animal Stories, for a lucky #FolkloreThursday newsletter subscriber this month!

‘Discover a menagerie of animals with this book that brings together 50 best-loved tales from all around the world!
Meet the Big Bad Wolf, the Ugly Duckling, and many other favorite characters from classic stories, myths, and legends in these fresh and vibrant re-tellings. Perfect for reading aloud!’

Angela McAllister is the author of more than 80 books, including picture books, young fiction and novels for children of all ages. Her books have been adapted for the stage, translated into more than 20 languages around the world and have won numerous awards. Originally hailing from Romania, Aitch's tactile, folky illustrations are inspired by her love of travel and nature. With mediums as diverse as textiles and watercolour, her dreamy characters hide among bold blooms and retain a strong sense of her Romanian heritage.

Songs of the Sea: The Origins of Shanties