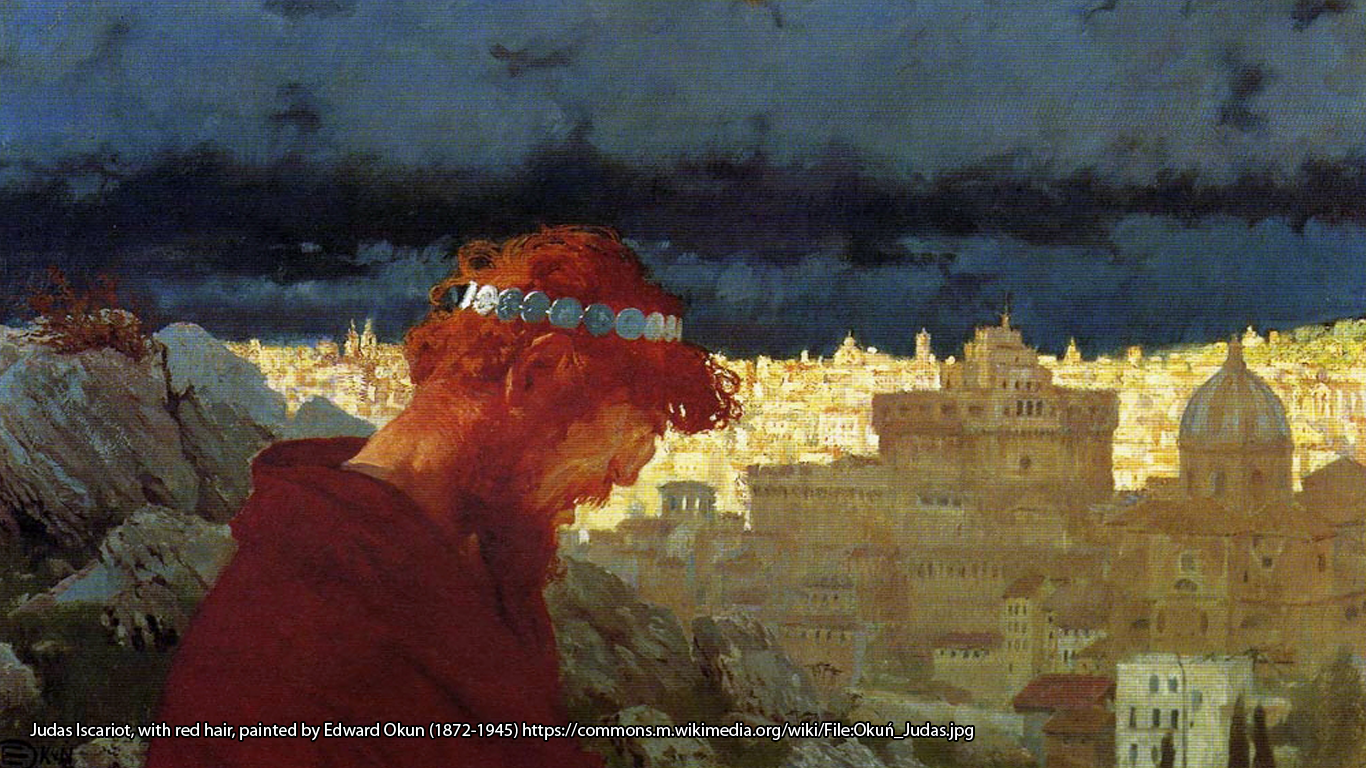 Stereotypes based on appearance are all too common, but redheads certainly seem to have a raw deal. Where might some of these ideas have come from?

Often we might try and pick up some clues from older beliefs or superstitions. In Egypt, for example, it was believed in ancient times that the colour red was unlucky. Once a year, a ceremony would be held where a redheaded woman would be burned alive. This was an attempt to banish the ill fortune of red hair. But also, on the other hand, they associated redheads, and animals with red hair, with the god Set. Many of the pharaohs had red hair, not least Ramses who was one of the most powerful.

A similar split between lucky and unlucky beliefs attached to red hair are found in Ireland. Generally, red hair is considered lucky there. But some Irish people believed that the trait of red hair came from the Danes, whom they hated, and hence it was unlucky. This animosity towards the Danes stretched across Britain in fact, stemming from the Viking invasions, and so the phrases ‘red-haired Dane’ or ‘red Dane’ were used as an insult.

In 1896, the English Dialect Dictionary defined the word ‘Dane’ as ‘a red-haired man, a term of reproach’. Insults of this nature are recorded in Cheshire and in Cornwall, for example. The custom of first footing comes predominantly from Scotland and the North of England, although we find variations across the country and also internationally. It relates to the first person to cross the threshold of a house after midnight on January 1st. You would obviously want someone to bring you good luck for the year. Around 1900, in a village close to the city of Liverpool, it was recorded that ‘if a redheaded man ventured to come to the door on New Year’s Eve as a ‘first-foot’, he was driven away and called a bloody Dane’.

Spain is another country which historically held a prejudice against red-haired people. In this case, in a country known for its ties with the Madonna and Christianised festivals, the animosity stems from their belief that Judas Iscariot, the man who was said to have betrayed Jesus, had red hair.

The figure of Judas with red hair is also linked to vampire folklore. Some say that Judas became the first vampire when he took his own life after the betrayal of Jesus. The thirty pieces of silver subsequently acted as a weapon which would burn his skin if they touched him. This all sounds very reminiscent of a Hammer Horror movie. But we can look to European vampire lore and indeed find a clan called the ‘Children of Judas’. In Greece, it was believed that redheads would turn into vampires after they died. 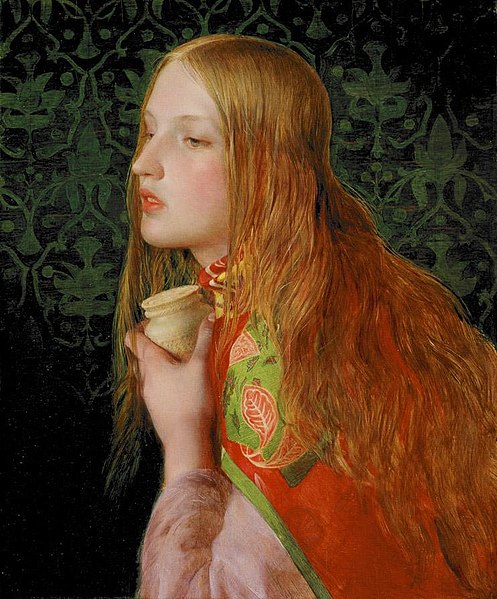 Historically, the French as a nation seemed to have little positive to say of redheads. Even into the 19th century, the phrase ‘poil de Judas’ (hair of Judas) was used to describe them. Back in the 1500s, it was said that witches in France would blaspheme the name of the Virgin Mary by calling her ‘la Rousse’, the redhead.

Red hair was said to be a sign of witchcraft in Christian Europe, and was often enough for a witch finder to pronounce guilt on someone. The Malleus Maleficarum identifies witches as having red hair and green eyes. Medieval and earlier sources also ascribed magical properties to the biological makeup of redheaded people. Latin texts in the 1300s stated that the blood of a redhead could turn copper into gold. The fat of a red-haired man was said to be able to be used to make a poison, and the urine from red-haired boys was used to make paint for stained-glass windows.

Red hair was also sometimes used as an ingredient in a charm. Charles Godfrey Leland, writing in his 1891 book Gypsy Sorcery and Fortune Telling (titled when the term was more racially acceptable than it is now), says that:

‘For easy childbirth red hair is sewed into a small bag and carried on the belly next to the skin during pregnancy. Red hair indicates good luck, and is called bala kameskro, or sun-hairs, which indicates its Indian origin.’

In spell lore in the Scottish Highlands, witches were said to cause the infection erysipelas, which leads to red inflammation on the skin, by cutting a lock of red hair into small pieces and casting them, with cursing, in the direction of the person or animal that they wished to infect.

During the Spanish Inquisition red hair was also used as evidence that a person was a witch, because they had stolen the fire of hell.

With all of these long-standing beliefs and prejudices against people with red hair, it is not surprising that many superstitions have arisen about them. These tend to mostly be on theme of ill fortune.

Sailors are known for their superstitions regarding things that bring bad luck, because of course they are very vulnerable to problems when out at sea. They were especially wary of redheads because of all the bad luck and animosity historically ascribed to them.

A Munster superstition stated that if the first person seen by a man on his way to work was a red-haired lady, then he would achieve nothing that day.

There are other fascinating beliefs about redheads worth noting:

One says that redheads were born with a pig under the bed.

During the Middle Ages, when red was seen as the colour of the Devil, red-haired children were thought to have been conceived at the wrong time of the month.

It was believed at one time that people with red hair could not make good butter.

Although it is uncertain that it has been recorded in print, an oral contribution to the subject from a London woman in her 80s said that it was common in her childhood to hear that if two people pour from the same teapot, one of them will have ginger twins.

There are more international superstitions, too. A 17th century French proverb translates into ‘salute no red-haired man nearer than thirty feet off, with three stones in thy fist to defend thee in thy need’. A saying in Hungary is that ‘a red dog, a red horse. A red man: none of them are good’. An old Russian proverb suggests that there was never a saint with red hair, and in Japan it was believed that redheads were the offspring of lepers.

The ‘Darnley Portrait’ of Elizabeth I, probably painted from life Source

We should end on a more positive note after so much negativity and misfortune, because it really isn’t all bad for the redheaded amongst you.

Because of the association of red with fire and blood, red hair is often associated with passion and for many it is a very attractive trait. It was famously loved by Titian and many of the pre-Raphaelite artists.

British legend says that King Arthur had red hair and that a redhead would lead the country in times of trouble. Maybe Elizabeth I, one of the United Kingdom’s most remembered redheads, was one of those leaders. She was indeed a powerful and well-respected woman.

We have seen not only negative but positive traits come through in the folklore of the redhead, and the same is true of any cultural group. The beauty of folklore in itself is that it celebrates diversity and tradition through both sides of the metaphorical coin. Long may it be the case.

(And in case the title of this article intrigued you, it comes from a quote by the author Mark Twain).

This article is built upon a talk originally given to The Folklore Society by Sophia Kingshill, and who generously allowed me access to her research.

The Folklore Podcast is committed to preserving the traditions and beliefs of all cultures. A new project in 2019, The Folklore Podcast Big Record, is looking to form a team of interested volunteers to interview people about their memories of traditional beliefs before they are lost forever, in the way that so much of the folklore we enjoy now was preserved in the 19th and 20th centuries. For more details or to take part, please contact us here.

Daniels, CL and Stevans, CM (Eds), 2003, Encyclopaedia of Superstitions, Folklore and the Occult Sciences of the World, University Press of the Pacific

Fire and Fur: The Many Guises of the Grimms’ Fairy-Tale Witches

Michaelmas: The Day the Devil Spits on the Blackberries?