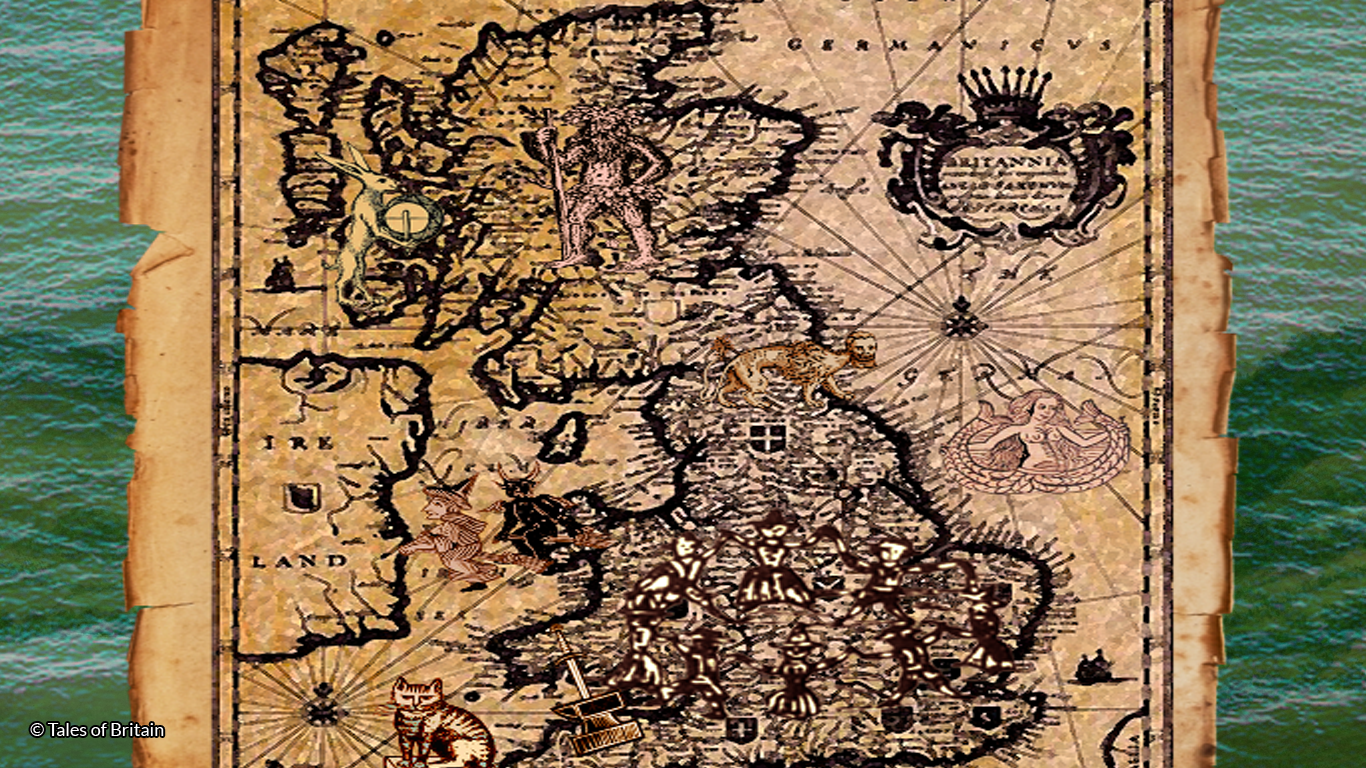 A Very British Book: The Road to ‘Tales of Britain’ 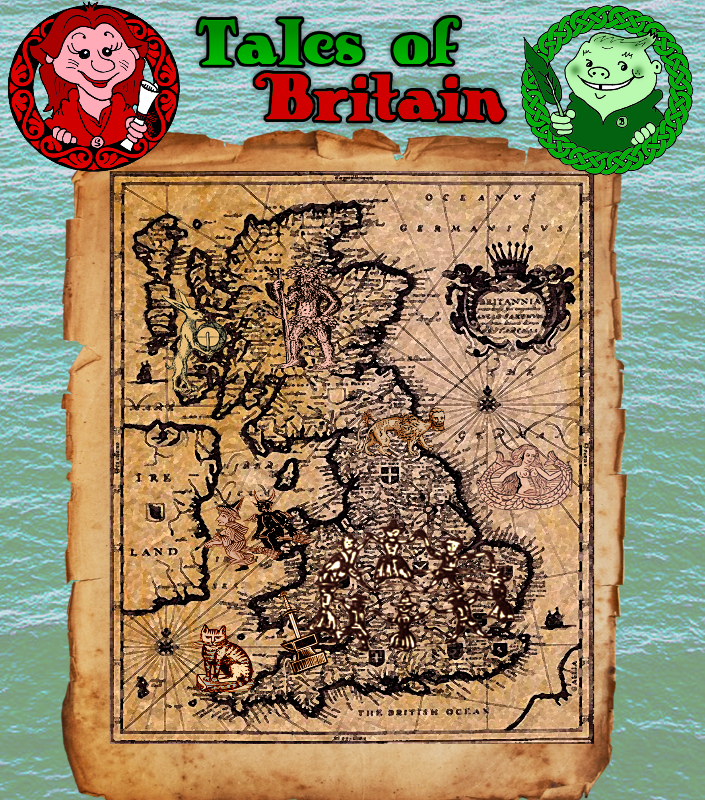 Thirteen years in the making, we are finally open for worldwide pledging on Tales of Britain, published by Unbound. If you visit the Unbound website and watch the project video, firstly, I must apologise for my face, but also some folklore-lovers may be taken aback by the opening insistence that there is currently NO collection of British folklore – and they may point towards the Folio Society’s leather-bound mini-library, or the host of regional folklore books available, like the History Press series. There are also numerous separate collections of Welsh, English and Scottish tales. But our frustration remains – where is the single volume collection of our generation’s retellings of the island stories that have lasted centuries, or even millennia, preserved in the landscape from Land’s End to John O’Groats?

The whole campaign began with a nephew. I’m one of three boys, born and raised in Ludlow, halfway down the Welsh border – which is why I know that borders mean so little. Twenty miles west, and I would be classified ‘Welsh’, but as it is, I’m supposed to identify as a descendant of first millennium marauders and call myself ‘English’. Yet I can only see myself as ‘British’, part of the wonderful mongrel breed subsisting on this green wodge of north-west Europe, a populace of all colours and kinds. My brothers moved to Yorkshire and Dorset, and so when I became an uncle, I liked the idea of giving the baby a storybook to remind him of his Shropshire roots, and found a fun website with a few very briefly related Shropshire folktales. I found great pleasure in perfecting my own, more detailed, occasionally silly way of telling the stories, and in time, as friends began creating tiny humans too, there were tales to be rewritten in all areas of the country.

As this interest grew, I tried to locate an affordable British folktale collection to read for my own pleasure, something unpretentious, not too dark or crusty… but I was out of luck. As a life-long lover of folklore and mythology, ‘The Lore of the Land’ was a fixture by my bedside and I’d read numerous other books on British mythology, but they were exhaustive, academic dictionaries of legend, not what I was interested in – distinct stories with a beginning, a middle and an end, and no (or minimal) repetition of elements from other myths. The white noise of old wives’ tales makes it almost impossible for most people to appreciate our national treasury of STORIES. There’s so much dead wood – every county in Britain has its own big, black ghost dog with saucer eyes, springs devoted to beheaded saints, and ghost stories galore. The challenge was to sift through and find the real gold – particularly tales, like Molly Whuppie or the Knucker, which deserve to be as well-known as any fairy tale in the world.

What also fast became clear was that the majority of these stories were all firmly anchored in their landscape, and so it seemed natural to include a tourist guide with each tale, encouraging the reader to step into the story’s real location, and relive it once again.

Regionally of course, we all have local tales which most of us are brought up to treasure, but what if someone on the Isle of Mull would love a story set on Sark, and vice versa? Where was the sense in leaving these stories as regional lore, only? And equally, although I have a straggly beard and like nothing more than lighting an incense stick now and then, why were we allowing our British folktale treasury to become ghettoised as the sole territory of mystics and folkies? And, for that matter, academics? Can’t we have a chance just to enjoy the stories? Pixar’s ‘Brave’ was a take on Celtic folklore entirely imagined in Hollywood, why wasn’t Molly Whuppie deemed famous enough to join Cinderella and Ariel in the Disney princess stakes?

It became crucial to try and make this collection appeal to the widest audience possible, mixing humour with magic in totally fresh retellings aimed at a Pixar-loving audience, or The Simpsons, or Harry Potter, or Horrible Histories – creations which can appeal to all ages. And of course, Harry Potter was entirely built on this mythology, as was The Hobbit and others, but is it not time to allow the source material used by Rowling and Tolkien to stand alone, and be celebrated in its own right?

It should go without saying that many of these tales are gory, or bawdy, or generally horrifying, and we have no interest in whitewashing or bowdlerising. But in a time where dark, twisted, adult approaches to fairytales have surely become the norm, we’d like to try and bring back some of the fun and simple magic of storytelling. Every one of the seventy-seven tales we’ve chosen has been told and retold in front of numerous audiences (with live shows performed by Brother Bernard and Sister Sal), and they have all evolved with each retelling, responding to the people’s needs – and it’s always huge fun. It also became clear that centuries of puritanism and misogyny had distorted many tales, and it became our job to go right back to the root of each story, and see what made it tick for a modern audience, while keeping the ancient spirit of every yarn alive. It’s been a challenge, finding the right balance between preservation of a legend’s roots and making it feel fresh to a modern audience, but a ridiculously pleasurable challenge at that. 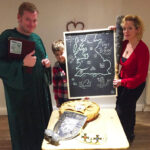 Tales of Britain: A brilliant project!

And so, the long process of getting Tales of Britain noticed and published began. It was originally to be titled Brother Bernard’s Big Book of British Bedtime Ballads, because the authorship of the retellings had to be irrelevant. If Stephen Fry or Neil Gaiman retell legends, it becomes part of their own ‘brand’; there may be many other retellings, but they have their own, well-loved take on the mythology. As there was no other book like this one, and each tale was being retold with the utmost eye for detail, reupholstered and presented as the 2017 version of the legend, they should be presented as anonymously as possible, and so a 7,777-year-old secular scribe called Bernard seemed to fit the bill.

But as this roadmap of British stories was so unlike anything else on the shelves, publishers were terrified: Was it a children’s book? Did it belong in the mythology section, or the tourism section? And yet, despite these publisher fears, time after time, the concept of ‘read the story on a Tuesday bedtime, go and visit the real place Sunday afternoon’ triggered the same enthusiastic response from everyone who heard it, especially parents: ‘Why doesn’t this book exist!? I need to buy one now, and start exploring!’

Well, this is exactly what Unbound Publishing was created for – to make the books that fill the criminal spaces on bookshelves, books that normal publishers are too afraid to try to create. As the company was founded by key creators of QI, there is a kinship here – where QI has provided an entertaining, reliable umbrella for quite interesting facts, Tales of Britain will be a safe haven for our folklore. We hope that in time, if the campaign continues, we will have a Tales of Britain podcast/audiobook, further releases, bigger live tours, maybe even a TV programme… We want to do for British stories what the Grimm brothers did for German lore, and Perrault for that of France.

But it all begins with this book, Tales of Britain, a roadmap to the folklore of Scotland, Wales, England, the Isles, complete with tourist guides, and each of the 77 tales retold for the 21st century, while respecting the roots of every legend. We want to thrill everyone, be they first or fiftieth generation ‘British’ – or indeed, Britophiles and Brit descendants all over the world, Canada, the USA, Australia and New Zealand – with British stories they know (Arthur, Robin Hood, Dick Whittington, Lady Godiva, Macbeth, King Leir), British stories they don’t, and British stories they never even realised are British (you will be surprised). We want folklore academics, bright kids, Glastonbury folkies and story lovers of all kinds to revel in these tales which have survived for thousands of years, but are only with us now because each generation has made them their own. This is British folklore for our generation, and we hope you will join us. 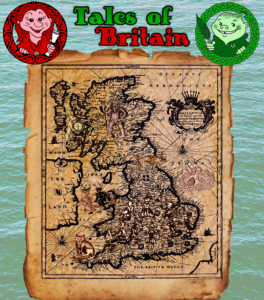 Tales of Britain is now funding on unbound.com — please go and pledge now! You can learn more at www.talesofbritain.com and jemroberts.com