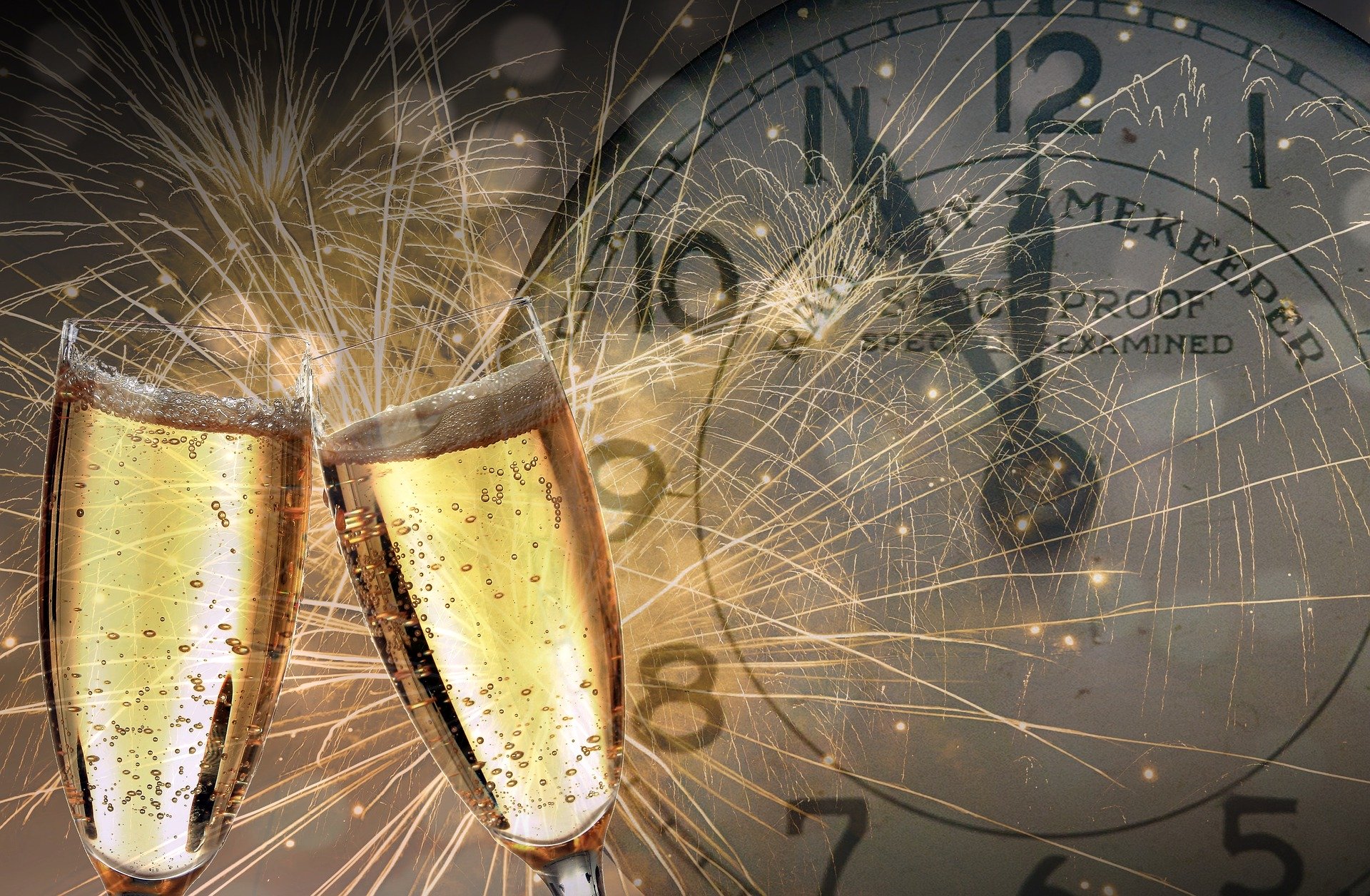 New Year is, probably, the most universally celebrated annual event globally. Admittedly some regions of the world have a different calendar day which they mark as the new year. For example, the Chinese New Year is celebrated on the new moon that appears between 21 January and 20 February. Why is celebration of the new year so universal? Why does the start of the new year carry such special symbolism?   What is the significance of the symbols of celebration? This article analyses these questions and observations with reference to folklore.

Why is celebration of the New Year so universal?

Celebration of New Year has a long, historical pedigree. It is deeply embedded in the human psyche, highly influenced by the seasonal cycles.

New Year’s festivity dates back some 4,000 years to ancient Babylon, connecting religion and mythology. In ancient Babylon, the new moon following the vernal equinox, when, in late, March an equal amount of sunlight and darkness are present, marked the new year. The vernal equinox represented the rebirth of the natural world. The Babylonians celebrated a religious festival called Akitu, which evolved from the Sumerian word for barley, which was cut in the spring) that involved a different ritual on each of its 11 days. During the festival of Akitu, statues of the gods were paraded. Rituals were enacted to symbolise their victory over the forces of chaos. The Babylonians believed the world was symbolically cleansed. The world was recreated by the gods in preparation for the new year and the return of spring.

The early Roman calendar comprised 10 months. Each new year began at the vernal equinox. The Roman New Year originally corresponded with the vernal equinox. Tradition suggests that the calendar was created by Romulus, “the founder of Rome”, in the eighth century B.C. Over the subsequent centuries, the calendar lost its synchronicity with the sun. Julius Caesar decided to solve the problem by consulting with the most prominent astronomers and mathematicians of his time in 46 BC by introduction of the Julian calendar. The Julian calendar is a solar-based calendar. The calendar closely resembles the more modern Gregorian calendar that most countries around the world use today. Julius Caesar instituted January 1 as the first day of the year, partly to honour Janus, the Roman god of change and beginnings. Janus two faces enabled him to look back into the past and forward into the future and hence transition from one year to the next. Romans celebrated January 1st by offering sacrifices to Janus in the hope of good fortune for the New Year and accompanied the sacrifices by, decorating their homes with laurel branches as well as attending bacchanalia.1st January set the stage for the next twelve months. Friends and neighbours made a good start to the year by exchanging well wishes with gifts such as figs and honey.

In medieval Europe, however, the celebrations accompanying the new year were considered pagan. In 567AD the Council of Tours abolished January 1st as the beginning of the year, replacing it with days carrying more religious significance, such as December 25th or March 25th, the Feast of the Annunciation, also called “Lady Day.” At the same time January 1st was given Christian significance by becoming the Feast of the Circumcision, the eighth day of Christ’s life counting from December 25th The Feast of the Circumcision reflected the Jewish tradition of circumcision eight days after birth on which the child is formally given his or her name.

By way of a concluding comment New Year’s Day did not become a public holiday in England and Wales until 1973, when the UK joined the European Common Market. By contrast Christmas Day was a public holiday, except in Scotland, where it was a bank holiday in 1871 Bank Holiday Act. Bank holidays were not regarded as holidays and businesses and local authorities continued with business as usual, and the tradition of local holidays prevailed. The attitude of the church in Scotland contributed to Christmas being effectively suppressed until the 1950s. In 1971 the Christmas Day Act made that day a bank holiday across the whole of the UK.

Why does the start of the New Year carry such special symbolism?

New Year is resonant with symbolism for many reasons. New Year marks the end and the beginning of the period of time known as “the year.” It symbolises the middle of winter and the prospect of spring; the days very gradually become lighter and life is invigorated in the Northern Hemisphere and the corollary in the Southern Hemisphere. How common are many of the events and behaviour across the world: of this is: fireworks, good luck rituals and resolutions for example give human beings the facade of control over their future and destiny. New Year is a time to consider the frailty and weakness of the human race and consider how they might reduce their vulnerabilities and the ways those vulnerabilities may be addressed. The hiatus of New Year inevitably poses questions from thinking about the unsettling unknown of what lies ahead. These vulnerabilities and shared behaviours are have transcended history and culture. One day in the year represents the unique passage of one year into the next, a concentrated illustration of human kind’s need to survive. Climate change campaigners would be well advised to couple their message onto the message of New Year—it would be more powerful!

What is the significance of the symbols of celebration?

Two of Austria’s New Year’s food traditions are finding a lucky charm hidden inside a suckling pig and dessert of peppermint ice cream. They represents economic fortune in the coming year. In France New Year’s Eve, edible feast comes in the shape of le reveillion de la Saint-Sylvestre. Much of nation will feast for hours from late on New Year’s Eve into New Year’s Day on foie grass, turkey, and oysters elaborate gateaux and of course plenty of champagne. Such repast is meant to signify wealth in the year. In Spain New Year’s food traditions include people eating 12 grapes at midnight on New Year’s Eve; one for each time the clock chimes. Superstition suggests that those who fail to do so, miss out on extra good luck for the coming year. By contrast, the Swiss don’t actually eat their New Year’s treat. They simply drop whipped cream on the floor and leave it there, symbolising richness in the coming year.

Champagne, some people claim, was originally an English invention as opposed to a French one. The Brits developed the technology to bottle carbonated drinks in the late 1500s.Using techniques translated from making cider, they began to make sparkling wines (of which Champagne is one variety). This invention also required creating stronger glass bottles that could withstand the pressure built up inside by the fermented drink. Subsequently, Champagne became the popular drink of choice for celebrations by the royal courts of Europe. Towards the end of 19th century Champagne became a worldwide product success. The price began to drop. Producers started marketing the drink universally. The less affluent couldn’t afford it for their daily table wine, it was affordable enough for special occasions. Champagne became especially popular for New Year’s celebrations as opening the bottle produced a firework-like celebratory “POP”. The wine flowed out in abundance.

When celebrating the New Year, many cultures take the opportunity to dress up in myriad of fashions. Most of these New Year’s clothing choices have symbolic and bring laughter and gaiety to the festival. In the Philippines, people eat “round shaped” foods, carry coins in their pockets. They wear clothing with polka dots. The round shapes symbolise money an enhance expectation of financial gain. Italians wear new clothes to ring in the New Year. New Year is a time for presents. Each gift symbolises something specific for the recipient. The Vietnamese wear new clothes herald the New Year as a fresh start. These clothes are not the modern Western attire that that most people wear in daily life. They are traditional outfits (ao dai) which feature long gowns worn with trousers. In Turkey, wearing red underwear at midnight on New Year’s Eve is crucial to bring good luck in the coming year. For that matter, this tradition is also observed in other countries, including Italy, Spain, and Mexico. Red is traditionally a lucky colour at New Year, by way of attempting to exert control over fate and the future. The Dutch eat donuts; the circle is a symbol of success in Holland. Greeks bake special Vassilopitta cake, which contains a coin, thereby bestowing good luck in the coming year on whoever finds the coin in their portion. Fireworks on New Year’s Eve started in China millennia ago as a way to chase off evil spirits. The Japanese hold New Year’s Bonenkai, or “forget-the-year parties,” to bid farewell to the problems and concerns of the past year and prepare for a better new one. Disagreements and misunderstandings between people are supposed to be resolved

Public celebration of New Year come in a number of forms. They vary from fireworks, most major capital cities have a midnight firework display and religious services at midnight on New Year’s Eve to public parades in cities, and mass bathing dips in coastal towns and villages on New Year’s Day. While firework displays and religious services have historical resonance, public parades and mass bathing dips are manifestations of the 50 years since people have enjoyed more leisure! They are all manifestations of perceived joy, happiness and celebration. The tradition of sharing a New Year’s Eve kiss at the stroke of midnight, even with strangers, a feature derived in part from classic films, is now a custom in most modern New Year’s celebrations. German and English folklore cited that the first person you encountered in the New Year (and how that encounter went) would set the tone for the rest of the year. Attendees at masked balls in Europe used first person encounters as an act of purification after removing their mask. It is now widely believed that failing to share a midnight kiss on New Year’s Eve foretells a year “romantic loneliness.” However and wherever New Year is celebrated, most people celebrate and honour the passage of time with mixtures of respect and revelry. Such behaviour the similarity and uniqueness of the diverse array of cultures.

Throughout history, New Year’s resolutions seek to raise behaviour standards by treating people better, making new friends, and paying off debts. For example Babylonians would return borrowed objects. Jewish people would seek, and offer forgiveness. Scots go “first footing,” when they visit neighbours to wish them well. Humans are social animals who have evolved to depend on others for wellbeing and safety; “Do unto others as you would have them do unto you,” is an example of survival strategy. New Year’s resolutions are examples of the universal human desire to have some control over what lies ahead. The future is after all unsettling. Too many “unknowable” and to that extent challenges the human desire to take control and power over their lives. Typical resolutions to diet and exercise, abstain from drink and start saving provide a sense control over the uncertain days to come. Perhaps, typically, a survey “Nothing changes on New Year’s Day,”  of 3,000 people in 2007 followed for a year, 88% failed to in meeting their resolutions, while 52% had been confident they would when they made them.

I offer some concluding thoughts on the significance of New Year in folklore: