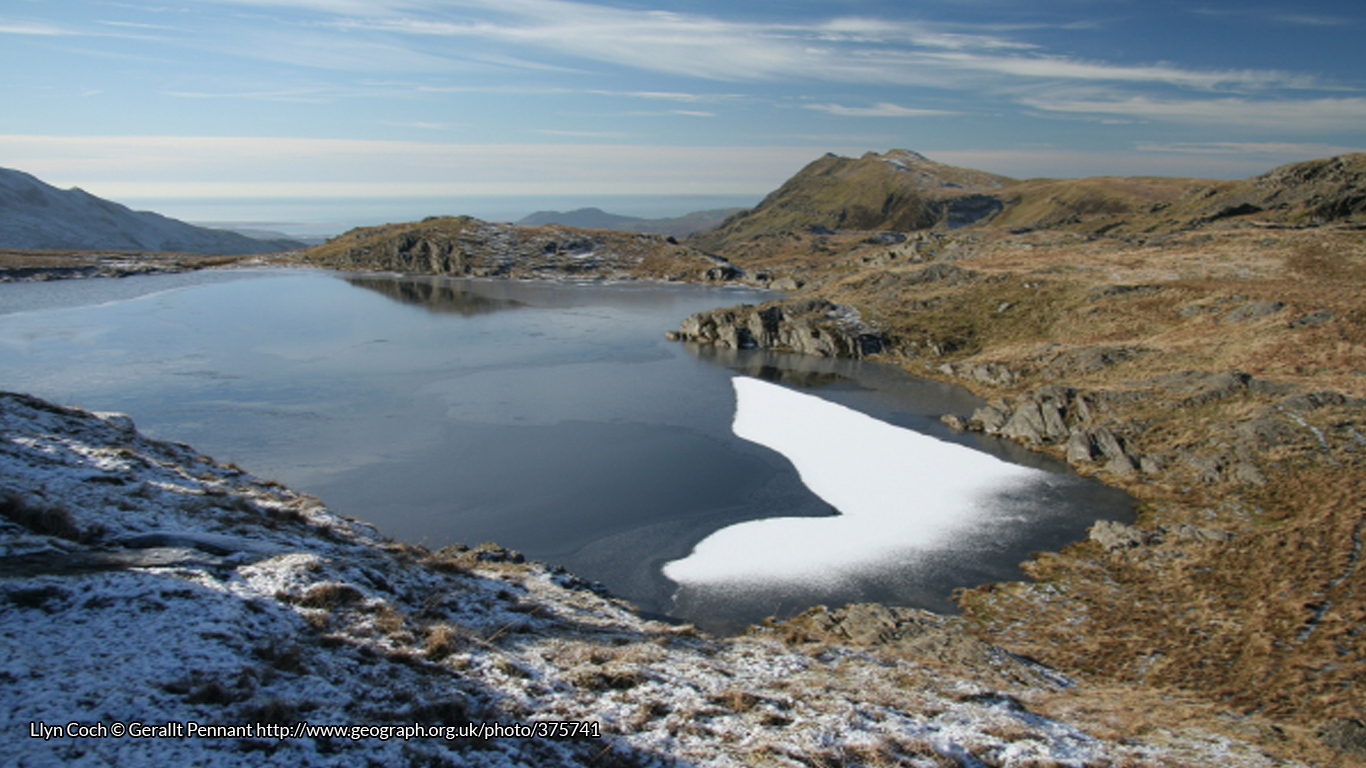 Folklore of the Welsh Lakes: The Legend of the Bride from the Red Lake

Llyn Coch, or the Red Lake, is a Welsh lake situated on Mount Snowdon; an area steeped in legend and folklore. One legend tells how a mortal man made a contract that allowed him to take a bride from the Otherworld that he had met at the Red Lake and fallen in love with. However, it was essential that he abide by the terms of that contract. In Welsh tradition and folklore, there are a number of similar examples of stories where a mortal man takes a bride from the Otherworld. In these examples, they live happily together, sometimes having children, but there is often a sad ending. One example is found in the tale of the Lady of Llyn y Fan Fach. In many cases, the man finds his love living in a remote lake or pool of water and the two fall in love, wishing never to part. After making a promise to her father that must never be broken, consent is given and they marry. However, there are those who say that it is risky to have relationships with those of the Otherworld. This point of view is indeed seen in many Welsh fairy or folk tales concerning humans who come into contact or even marry someone from the Otherworld. Presented here is one such tale, called The Bride of the Red Lake.

The Bride from the Red Lake

There was once a farmer who one day decided he would go fishing in the Red Lake. When he arrived, he found the lake shrouded in mist. Then a sudden gust of wind cleared a path through the mist across the lake, and to the farmer’s surprise, revealed a man perched upon a ladder busily at work thatching a haystack. Stranger still, the ladder appeared to be standing on top of the surface of the water, as did the haystack. The farmer was astounded, but the vision quickly faded, and soon all that could be seen was a gentle rippling of the water where the haystack and the thatcher had been.

After this, the farmer often visited the lake hoping for another glimpse of this strange Otherworld, but saw nothing out of the ordinary and he thought no more of his extraordinary vision. Then one Autumn day, he rode his horse up to the lake. As it was a hot day, he rode his horse into the water so that it could drink easily from the cool lake. It was a lovely day, and while the horse was drinking, the farmer sat on its back and stared lazily at the ripples that moved gently across the surface of the Red Lake.

Then what he saw next made him jump. Under the surface of the water a little distance from him, he saw the face of the loveliest maiden he had ever seen in his life looking at him through the gently rippling water. He sat spellbound staring at her and she calmly gazed back at him. As he stared, her head and shoulders slowly emerged from the water, and she looked deep into his eyes.

Jumping from his horse into the water, he splashed his way towards the maiden, but the vision vanished and quickly reappeared in another part of the lake. The farmer rushed over to it, but the vision disappeared just as he was in touching distance, and again reappeared in another part of the lake. This happened again and again, and the farmer eventually became exhausted and disheartened and rode sadly home, but he could not get the vision of loveliness out of his mind.

Early in the morning the very next day, the farmer went back to the lake, and sat on the water’s edge staring at the gently rippling water desperately hoping to see the lovely maiden again. He spent all morning staring at the water hoping she would appear, but to no avail.

The farmer did not get a single glimpse of the maiden, and he grew bored and frustrated and a little hungry. He had brought with him a bag of his favourite apples, which had been given to him by a neighbour and were sweet and juicy with a wonderful flavour . To relieve his hunger and to ease his boredom, he pulled one from the bag and bit into it. The apple was delicious and as he munched away, the maiden suddenly appeared in all her radiant loveliness and begged him to throw her one of his apples. The farmer was greatly surprised but kept his wits and said, “Well now, if you want one my apples you must come and fetch it yourself!” Taking one from the bag, he held it out to her, temptingly showing her the beautiful, shiny, red side, and then its luscious green side.

She looked at the apple unsure, but moved a little closer. “Here it is if you want it!” said the farmer, holding the apple up for her to see. The maiden moved tentatively closer and closer. He held it out for her to see, and she moved nearer and reached out and took it in her hand. The farmer quickly grasped her wrist with his other hand, and she screamed at the top of her voice. At this the lake suddenly became a mass of ripples, and an old man with a mass of tangled hair and a long beard rose from the middle of the lake, crying, “Mortal man, what do you want of my daughter?”

“I want your daughter to be my wife!” replied the farmer, “I love her more than life!” and he cried and begged and pleaded with him. Eventually, after much begging and pleading from the farmer, the old man of the lake finally consented. However, he laid one condition that the farmer had to abide by, or the marriage arrangement would be broken.

The old man told him that under no circumstances must the farmer ever strike his wife with clay, or the agreement would be instantly broken. The farmer was a decent man, and could not imagine himself ever striking his wife with anything, let alone clay, and readily accepted the agreement. So the farmer and the maiden of the Red Lake were married, and lived happily together in harmony and joy. They took great pleasure in each other’s company, and did everything together.

There came a day when his wife reminded her husband of the wonderful apples, and asked him if he would get her some. The farmer would happily have given her anything in his power that was his to give. He went and visited his neighbour, who gave him a bag of apples and also a sapling as a present for his wife to plant, so that she could have a ready supply of the apples that she loved.

He took the apples and the sapling back to his wife, who was overjoyed. After feasting on the apples, together they began digging a hole to plant the sapling. She held the tree while he dug the hole. “There, the hole is deep enough, come and place the sapling in it while I fill it,” he said, enthusiastically throwing the last spade of soil over his shoulder without looking. A clod of clay hit his wife square on her chest.

Although it had not hurt her, she immediately burst into tears. Crying bitterly, she told her husband, “Goodbye my love, forever goodbye!” and ran back to the Red Lake and straight into its waters, never to be seen again. The farmer spent the rest of his days in loneliness and misery,  lamenting the loss of his beloved wife.

As can be seen in this story, although the couple were very happy, the mortal man could not keep his side of the bargain and lost his wife when he broke it. It is often the case in Welsh folklore that when humans do fall in love with maidens from the Otherworld, or have dealings with its people, a sad ending is the result. Many of the lakes of Wales have legends of mortal contact with the Otherworld and the Tylwyth Teg. There are those who think that at such places, the veil that separates the earthly world and the Otherworld can sometimes be breached.

“The Bride from the Red Lake” in The Welsh Fairy Book by W. Jenkyn Thomas.  http://www.sacred-texts.com/neu/celt/wfb/wfb59.htm

Legends of the Lakes of Wales: Thematic Classification and Analysis, Carles-Enric Fernandez.